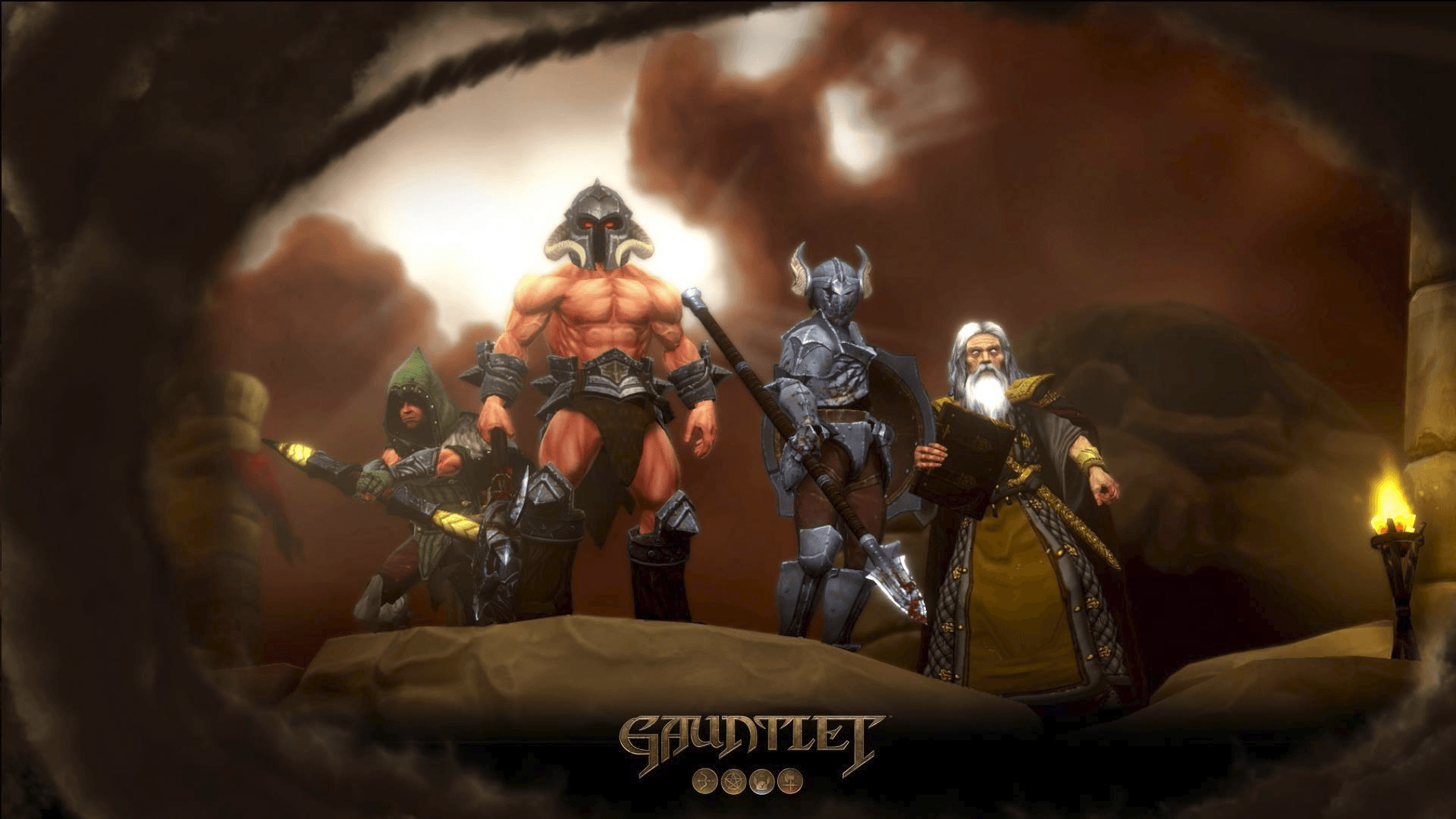 Thirty years ago, Gauntlet entered the world, offering a unique vision for arcade gaming future. As time progressed, we would receive remake after remake of Gauntlet, where players (up to four) crawl through nearly endless dungeons and in later games, mountains, castles and more. The goal is to reach the end and survive, acquiring food and gold on the way. In the original game the health trickles down slowly and a player can die if they do not eat regularly. This can be a problem when playing with friends that are competitive/jerks, as they can destroy the food and force their friends to die. This can still sort of happen, except thankfully the dwindling health is no longer an issue.

When I saw that a Gauntlet game was coming out I was beyond excited! Much of my youth was spent playing Gauntlet, Gauntlet II, and Gauntlet: Dark Legacy every weekend as per time allowed. It is not a game that is complex or difficult to understand and that is just what I ordered. Sometimes you just want to get together with a few friends and shoot/cut down mummies, skeletons, and foot race against death. The gameplay is pretty straight forward; players buy relics or equipment (as it is unlocked) and then head into a door that leads to a series of floors filled with evil and gold. 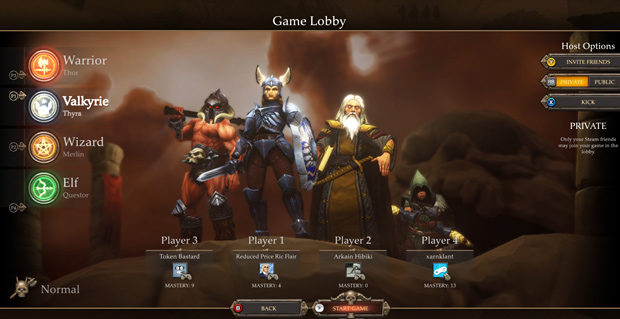 What is the reward in Gauntlet? Saving the world from evil is all well and good, but ultimately the real prize is gold! The game is absolutely swimming in gold, as if someone took Smaug’s horde of cash and dropped it down into a cave. And you are collecting it while fighting for your lives. You have four characters to play as in this iteration of Gauntlet: The Warrior (Thor), The Elf (Questor), The Valkyrie (Thyra), and the Wizard (Merlin). Each character has its own unique skillset, and certain equipment that only they can acquire (unlockable by finishing certain acts on the proper difficulty and gold). When you play the game for the first time, you must play as each character in succession and learn the commands of the characters to help you figure out who you may want to utilize. Each of the characters vary in difficulty, with the Wizard having the most commands at nine spells they can cast via a series of button commands. Mostly it is a button masher, with each button having a use, such as a basic attack, a special attack, using the Right stick on a controller to use a dash, or other methods.

There is more than simply hitting “A” and attacking though. It is imperative to know what your hero can do and when to do it. By having their own strengths and weaknesses, assembling the full team can truly wreak some havoc on the dungeon floors. The fiend responsible for the players being where they are, Morak, creates the enemies to fight and spends his time teasing and taunting the entire time like some twisted dungeon master that finally managed to trick friends into playing in his basement. The brunt of enemies will come from large skull-topped obelisks erupting from underground that will constantly spew minions until they are destroyed; please do not leave these alone! 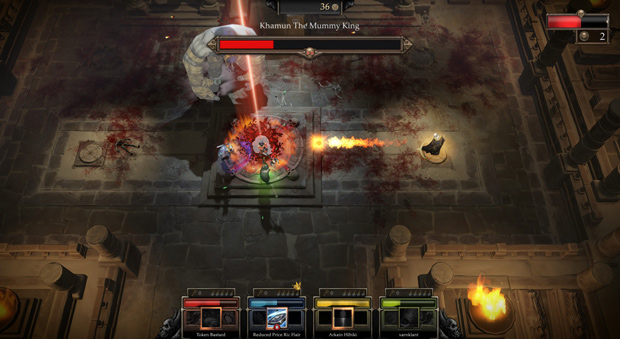 Unlike some previous iterations, you cannot play the same character as another party member, so there are no four Warrior teams to be had here. This is both good and bad. If you spend most of your time levelling Questor the Elf, and your friends join up and one locks in Questor, you have to play a character you have less experience with. The more time you put into a character, the higher its mastery rating is; mastery comes from challenges in game (such as dying repeatedly, killing x enemy type, and smashing prop objects to pieces) and reward your character for each tier of the challenge. These rewards vary from less gold loss on death, more damage on enemy type, faster speed in x area, and a greater chance to acquire gold from smashing things just to name a few. 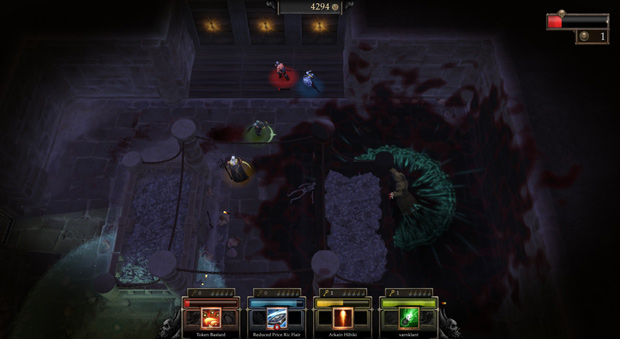 The Reaper Comes On The Wind

Let us not forget Death: he’s back and still cannot be killed. He is just one of the many challenges setting themed instances to the progressive floors of the dungeons of Morak. The game is divided into chapters each with their own portal, labeled with a Roman numeral I-IV. At the end there is a boss to fight, and each one has a different series of strategies one can employ to defeat them. You can make the game a little easier by buying relics, which you spend gold on from the wizard in the main hub of the game. They have various uses such as making enemies ignore the players, healing, or even summoning a demon to help fight the evil horde for a time. Combining these with the right character at the right time is ideal, and doing this incorrectly could make the game even harder! Relics can be equipped two at a time, and are activated with potions. No, those potions do not heal you. Only food – precious, destructible food – can save you. 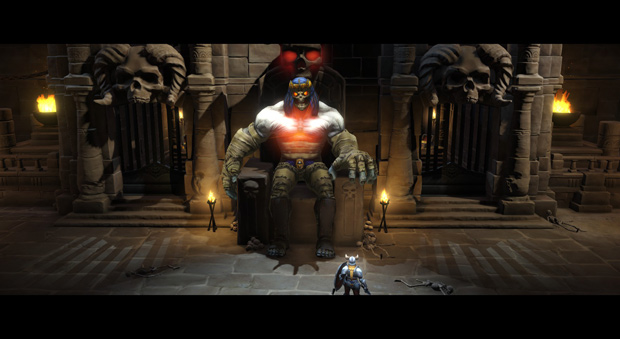 Single player in this game is ill-advised and is much more of a challenge no matter what difficulty you may be on. Luckily there is a Quick Join option in case none of your friends are around to play with or chose not to purchase this game. With friends, this can be one of the most entertaining games to be purchased on Steam. Destroying the food to prevent them from healing, grabbing gold out from under their nose, or setting off an exploding barrel right where they are standing! The game is more than simply killing enemies too; there are puzzles to solve, spike traps to avoid, and you will not always have enough keys to unlock various doors. Sometimes you simply have to hope for the best! And then there is the Crown. Occasionally an enemy will spawn that gives you a crown that can be knocked off your head. Keeping it at the end of a map will give you a gold bonus that sets you potentially above your teammates. 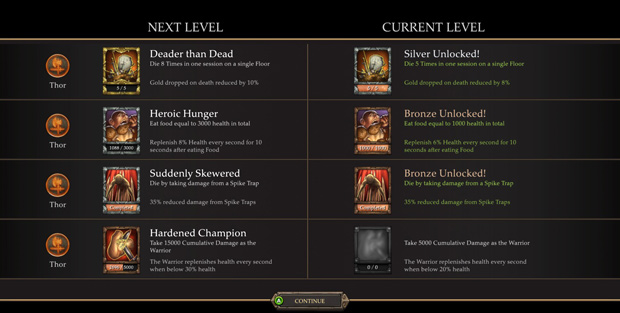 Gauntlet is a pretty simple game, but that’s what makes it so much fun; sometimes we do not need to have a strategy or perfectly timed stealth kills for a game to be enjoyable. Every so often, you want to have a few drinks, gather up a few friends on the internet (or local co-op) and massacre things. That’s the niche that Gauntlet fills. However, game overs can still happen, so don’t think you have infinite continues! If all players die at the same time, and there are no extra lives (in the top right corner of the screen), its game over. The meter is filled by killing enemies. As long as one person is alive, you can resurrect and continue the fight. Just about everything in this game is just right. The fun factor is real, the challenge is certain, and the nostalgia is ever present. The concept has aged well and offers near endless replayability with the achievement system combining with RPG elements to provide that extra bit of progression to keep you hooked.

The graphics are simple but beautiful; the ruins and caves are suitably dingy, but there is enough lighting to see the way to go. The designs of dungeons are fairly similar to previous games but are far from carbon copies. The characters look great, even if they are kind of small, but so are the enemies. That is until you reach boss creatures. They always look imposing and intimidating. The splash of blood and the explosion of rocky outcropping and bodies alike feel very organic.

It is my sincere hope that one day Sony controllers will be just as mainstream as Xbox controllers. I understand the reason and it does not change how I feel about the controls; the controls are nice and tight, and everything works just as it should. This is not a title that requires a great deal of confusing buttons, and the only thing I think it lacks is in-game voice chat and perhaps keyboard typing to speak to other players. Admittedly, too many things are usually going on to allow for that. Keyboard controls are slightly clunkier than gamepad but so long as you’re calibrated properly, function just as well with some practice.

There aren’t exactly a lot of different features going on in Gauntlet. However that is not an issue with this game; after all, people purchasing it are getting it to play dungeon crawling carnage-filled chaos with their friends and with other people on the internet. The gameplay is solid and is always fun. It really feels like I’m playing on an arcade cabinet again with so many references to the old games and it plays just like I’d expect it to.

There are lots of little sounds and musical bits that feel like a call to the original games and that’s just fine with me. Like many games in this genre’, the music can get a little tiresome after hours of playing, and you may find yourself listening to something else. It’s still very fantastic fitting music, and the opening title screen’s synthed theme made me smile. Though I was admittedly hoping for the NES Gauntlet theme, nothing is perfect.