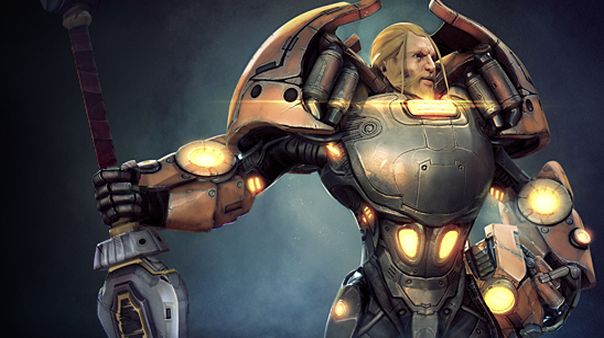 Lightbulb Crew, a French and Swedish indie developer, has announced that they will be taking their free-to-play MOBA-shooter mashup Games of Glory to Steam this summer, with the announcement of a specific date to follow soon. In preparation for the release, Lightbulb Crew has unveiled the new Games of Glory logo, symbolic for both the eSport aspects and the rich narrative universe offered by the game.
“We’d been wanting to give our logo a new, modern look for some time, and now seemed like the perfect timing,” said Anders Larsson, studio founder, “The new Games of Glory logo is a better representation of who we are both aesthetically and symbolically.”

In addition to containing the “GoG” letters, the logo can be seen as a representation of a stadium or the emblem of a team, with the player at the center, meant to represent the futuristic sport that is the game’s setting. An alternative reading of the logo presents the Synarch’s control over the galaxy, with two hands turned inward grasping a planet.
Logo updates will occur gradually across Games of Glory’s communication channels and game client.

Games of Glory players can also look forward to major game updates slated to coincide with the Steam release. Players will be able to maintain their current Games of Glory account and rewards while connecting via Steam. Players wishing to participate in the Games of Glory alpha can join now by visiting http://alpha.games-of-glory.com