Game On! A GameLit Anthology Available on Kindle 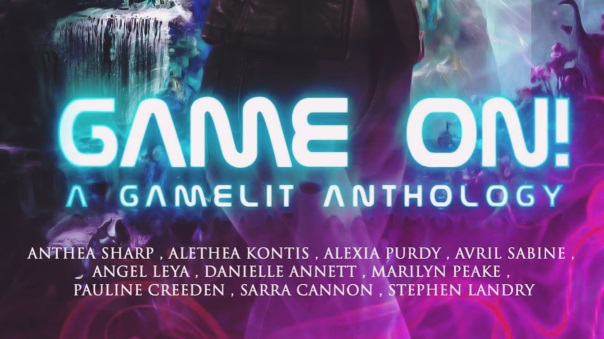 What happens when gaming is your life? Explore the fast-paced world of GameLit in these ten stories by bestselling, award-winning authors. Gain levels! Win fat loot! And hang on as these tales take you from a grim dystopian world to a fantasy landscape where nothing is quite as it seems…

True.love – NYT bestselling author Alethea Kontis
In this futuristic retelling of Sleeping Beauty, a gamer hacktivist tries to take down the world’s largest matchmaking site…and stumbles on a side quest he never bargained for.

Husk – Stephen Landry
Adventure, excitement, the never ending thrill of discovering new worlds in an ever expanding sci-fi setting. All fun and games until you find yourself crashing with a bout of amnesia on an unknown alien world with no escape, and mystery down every corridor.

Battle Mage – USA Today bestselling author Pauline Creeden
Can a clan master control a player both in and out of the game? Jordan Park loves the sub-levels in his favorite game, Battle Mage. But when he sees someone important from his past suddenly show up in the game, he wonders if she is there because of her own choices, or if she’s controlled by someone else. The only way he can discover the truth is by fighting a battle highly stacked against him.

The Anchoring – USA Today bestselling author Alexia Purdy
In a futuristic America, a sixteen-year-old hacker turned Robin Hood, Tatiana Miramar, has lived her entire life in a wheelchair. She awaits the possibility of winning a lucrative lottery for a functioning body. After meeting a captivating stranger in the addictive, online virtual game called Red Herring, she’s given the chance to change her life for a steep price.

Level Ten – Danielle Annett
Trapped inside the Helix, Serina is forced to complete thirteen levels to win her freedom. If she loses, any chance of seeing her family again is lost, her life forfeit to the game – but can she overcome the unbeatable odds?

Tales of Inadon 1: The Disc – Avril Sabine, Storm Petersen and Rhys Petersen
When all actions have repercussions, it isn’t really a game… Carissa has felt lost since the death of her mother. Learning about the Guardians Of The Round Table and Inadon has her alternating between hope and disbelief. Dark forces, a role-playing game style world, magic and being able to make a difference. No wonder she can’t quite bring herself to believe it’s real.

What’s in a Username? – Angel Leya
When gamer girls Maddy and best friend Amber run into Maddy’s crush while playing the hot new MMORPG, Power, Maddy decides hiding behind her guy Avatar is the perfect way to get close to said crush–without all the stupid awkwardness that usually ties her tongue and unties her shoelaces. But when she suspects her best friend has eyes for the same guy, their gaming suffers… and there’s more at stake in the MMORPG than anyone realizes.

Loxley – Sarra Cannon
In a dystopian world where citizens log into The Realm online to escape from their dark reality, one hacker fights to make a difference as she goes in search of a rare artifact.

Shade and the Secrets of Summer Camp – USA Today bestseller Marilyn Peake
Shade and her best friend Kai attend summer school before starting their freshman year at a college for magically gifted students. Shade is a Ghost Whisperer, with an ability to help ghosts move into the afterlife. When she is contacted by a ghost within a virtual reality game, summer camp stops being fun and games and turns instead into something deadly serious.

Real Challenge – USA Today bestselling author Anthea Sharp
Sometimes, the true challenge isn’t what you think… Top-rated gamer Spark Jaxley has made it to the World Championships, ready to give the competition her all. The stakes are high, the gaming is fierce, and her entire future is riding on the outcome. In the end, will she make the right choice?

Get your copy of Game On: A Game Lit Anthology from Amazon Kindle today!