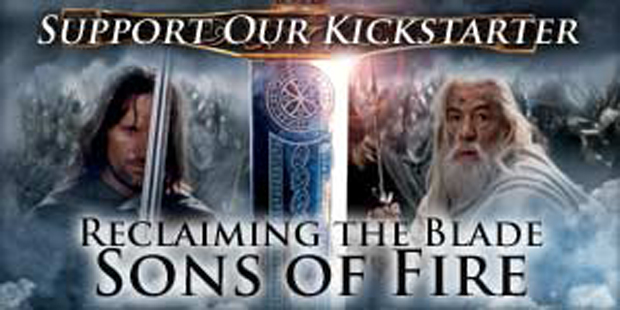 A new film ‘Reclaiming the Blade: Sons of Fire’ will explore the gaming culture, as well as sword crafting and wielding within digital domains. Top online video game websites MMOHuts.com and OnRPG.com will be partnering with Galatia too offer experienced insight on the connection between sword culture and the rise of fantasy MMORPGs to supplement the already star studded documentary.

The online RPG worlds are fascinated with the sword and spend countless hours forging and wielding them. This of course presents a very interesting opportunity for the award-winning filmmakers to learn more about our true fascination with the sword. The first Reclaiming the Blade film featured Lord of the Rings actors Viggo Mortensen, John Rhys-Davies, Karl Urban and Star Wars sword legend Bob Anderson. A #1 on iTunes, it delved deep into the cultural influence of swords in television and movies. The second film, ‘Sons of Fire’ will follow an army of gamers and developers who love the sword just as much, but the filmmakers need your help.

Forging a “real” digital blade and then taking up that weapon and using it in great battles and epic online quests sure is a ton of fun. The second film will leave no digital stone or sword unturned; exploring our love with the blade in games.

In order to truly explore where this fascination with the sword leads, Galatia Films needs your help in getting their finishing funds for the movie and is offering great rewards for those willing to become backers. Will crafting systems and digital blacksmithing become more real than ever? Will the martial prowess and historical movements in digital space become more like their deadly counterparts? Galatia Films, will be exploring these questions and more in the sequel.

Galatia Films is teaming up with both the Starz’ Spartacus series and The Chronicles of Narnia films to help tell the story. Lead actors and sword stunt trainers from this movie and TV show will be interviewed. Additionally Galatia Films is proud to announce that key executives at OnRPG/MMOhut including Darren “DizzyPW” Henderson and MMOHuts spokesman James “Bl0nde” Hunt.

If you like epic swords in games or in the movies, then you will absolutely love this film. Make this film a reality, support Sons of Fire Kickstarter page today before time runs out!