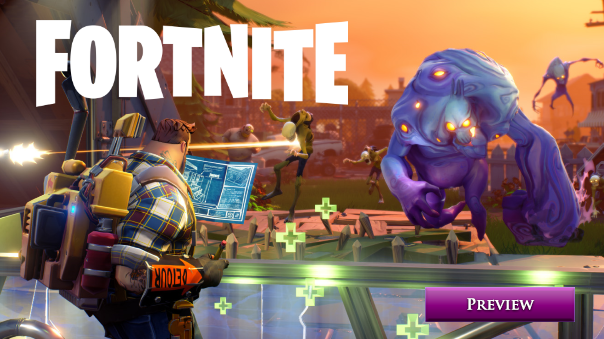 Fortnite, one of several new paid early access games that opens up this year, looks to offer an interesting take on survival and fort building games. I spent around a week or so playing around the PC version of the game (it is also available for PS4, Xbox Live and Mac). Here’s a short rundown of what I’ve experienced during the Early Access.

Fortnite mixes gameplay elements from survival games, where you can gather resources on instanced maps, while throwing you in Borderlands-like shoot outs against the husk. Half of your time is spent on gathering resources that you need to create everything you’re going to be using: from traps, to weapons, to ammo, and most especially to your fort’s building materials. The other half of your gaming experience in Fortnite focuses mostly on trying to defend against the husks as you stand your ground in a variety of missions. 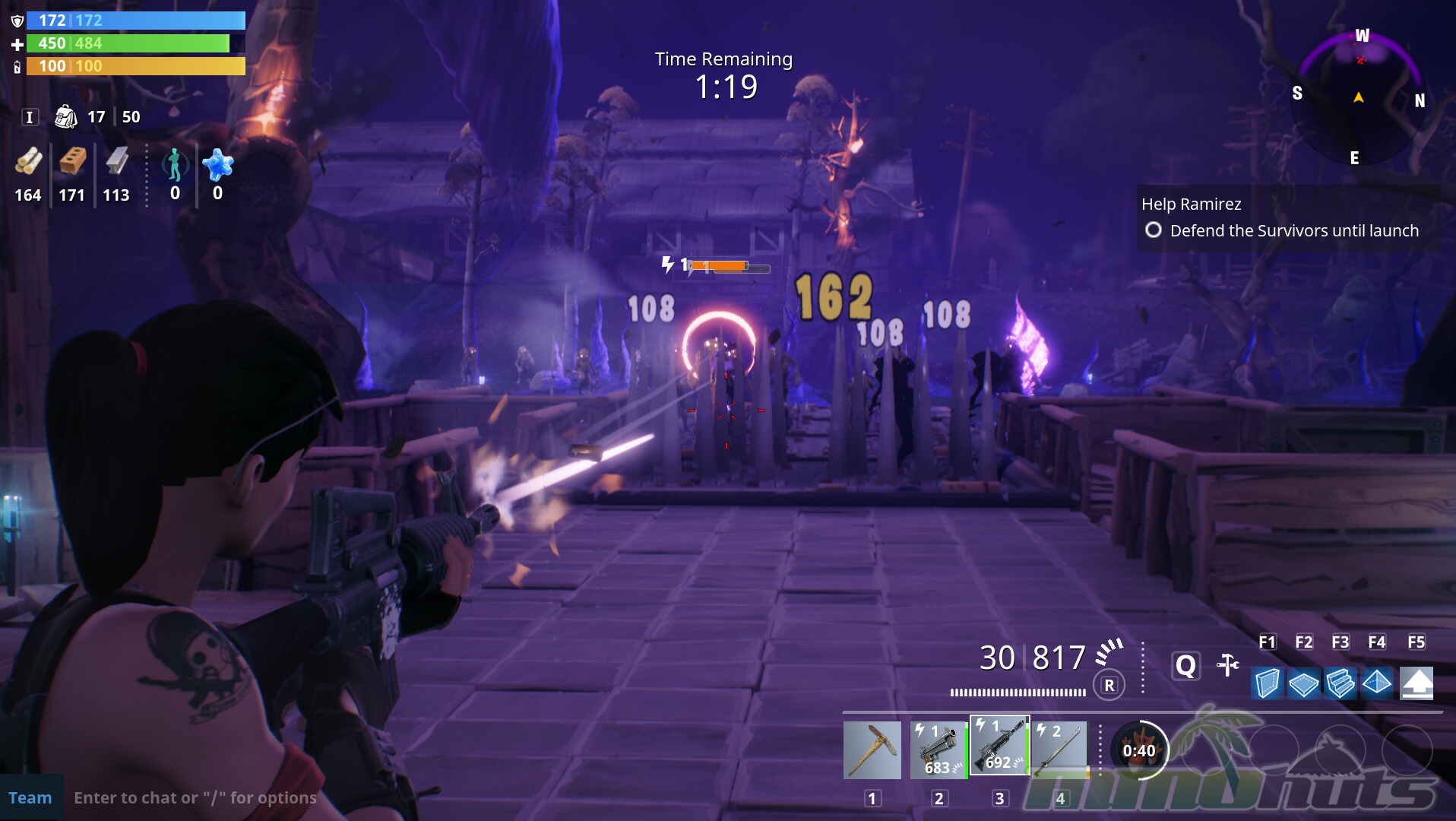 Defending Against The Husks

The game’s core gameplay is pretty straightforward. But the beauty of Fortnite is in the complex underlying gameplay elements that Epic Games has woven in to the experience.

In the early stages (or if you buy them with V-Bucks, Fortnite’s cash-based premium currency),  the game throws you a lot of Llamas that you can open up to give you goodies. Yes, you read that right: paper mache llamas are this game’s loot box. Having tons of Llamas in your inventory means that you’ll have tons of schematics, heroes, and survivors to sift through and manage.

The number of these items will overwhelm you at the start, but after the really long and tedious “tutorial” stage, you’ll have a faint grasp of what you can do with every llama you open. Fortnite’s system makes sure that everything that you can get from Llamas, even the normal or common drops, will have a use for you in game.

One of the more obvious features that you’d have a lot of expectation from in Fortnite, is, well, creating your own forts. I love that Epic Games made building your base real easy. With a few key presses and a few mouse clicks, you’ll have your base set-up in no time. 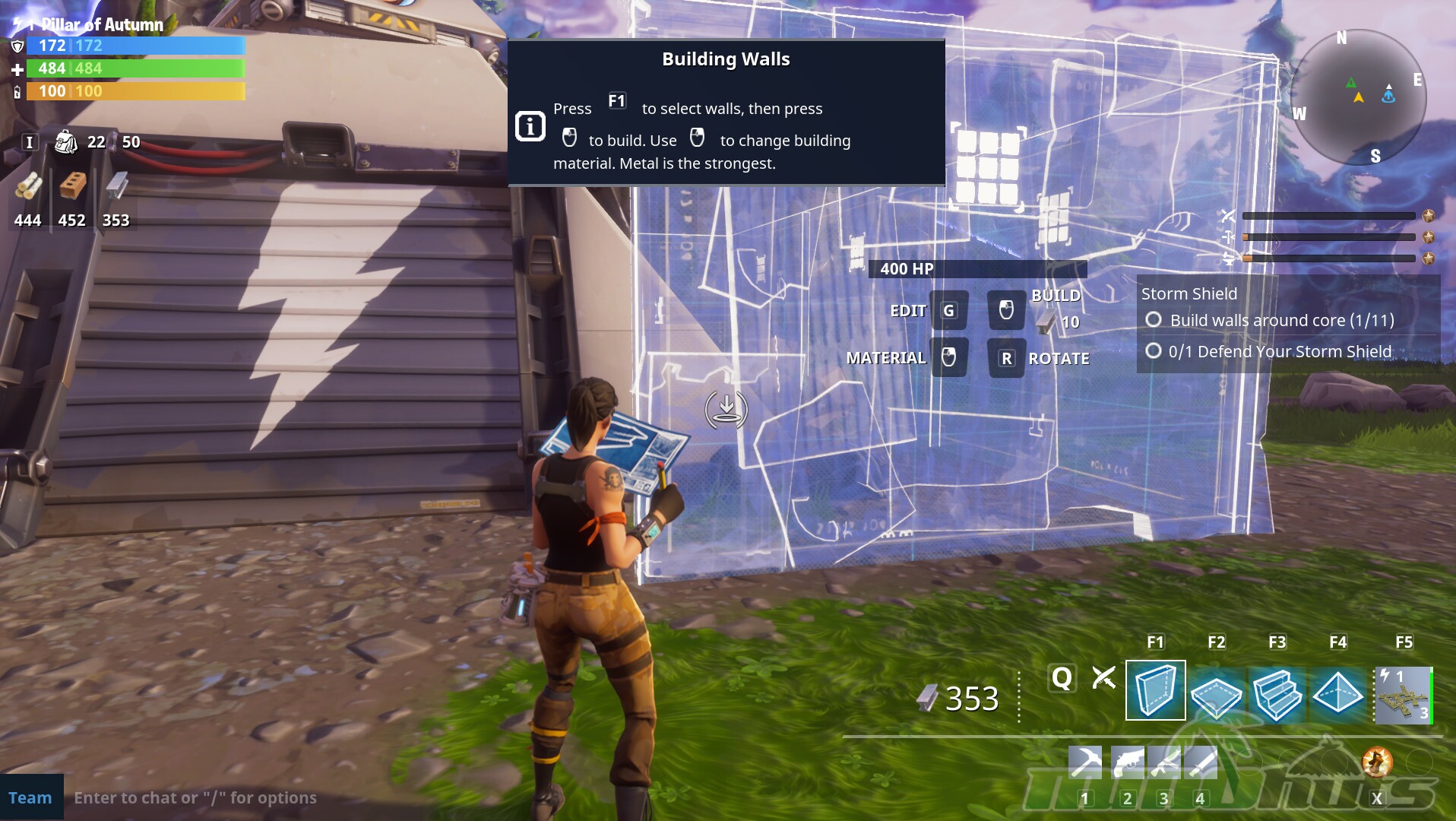 Learning to Build a Wall

But with the ease of building structures in Fortnite comes the grind of gathering resources to create them. With the game capping off the amount of materials (brick, metal, and wood) you can carry to 999, you’ll find yourself switching often between your homebase (or storm shield) and gathering from the various instanced maps.

If you’re looking for a reason to complain about Fortnite, then the grind to gather resources would be it. I actually spent around 2-3 hours gathering and building my home base to look just right, which I would say was time well spent.

After my first few days of playing the game, I really felt the grind in trying to power through levels 1-15 in Stonewood. This early stage cluster in Fortnite was made as a tutorial of sorts where players can understand and play around with the game elements. I must say that Fortnite is a game where you can’t just jump into it and ignore the game’s helpful prompts. Doing that actually made me lose myself in game and wonder what’s next for me. 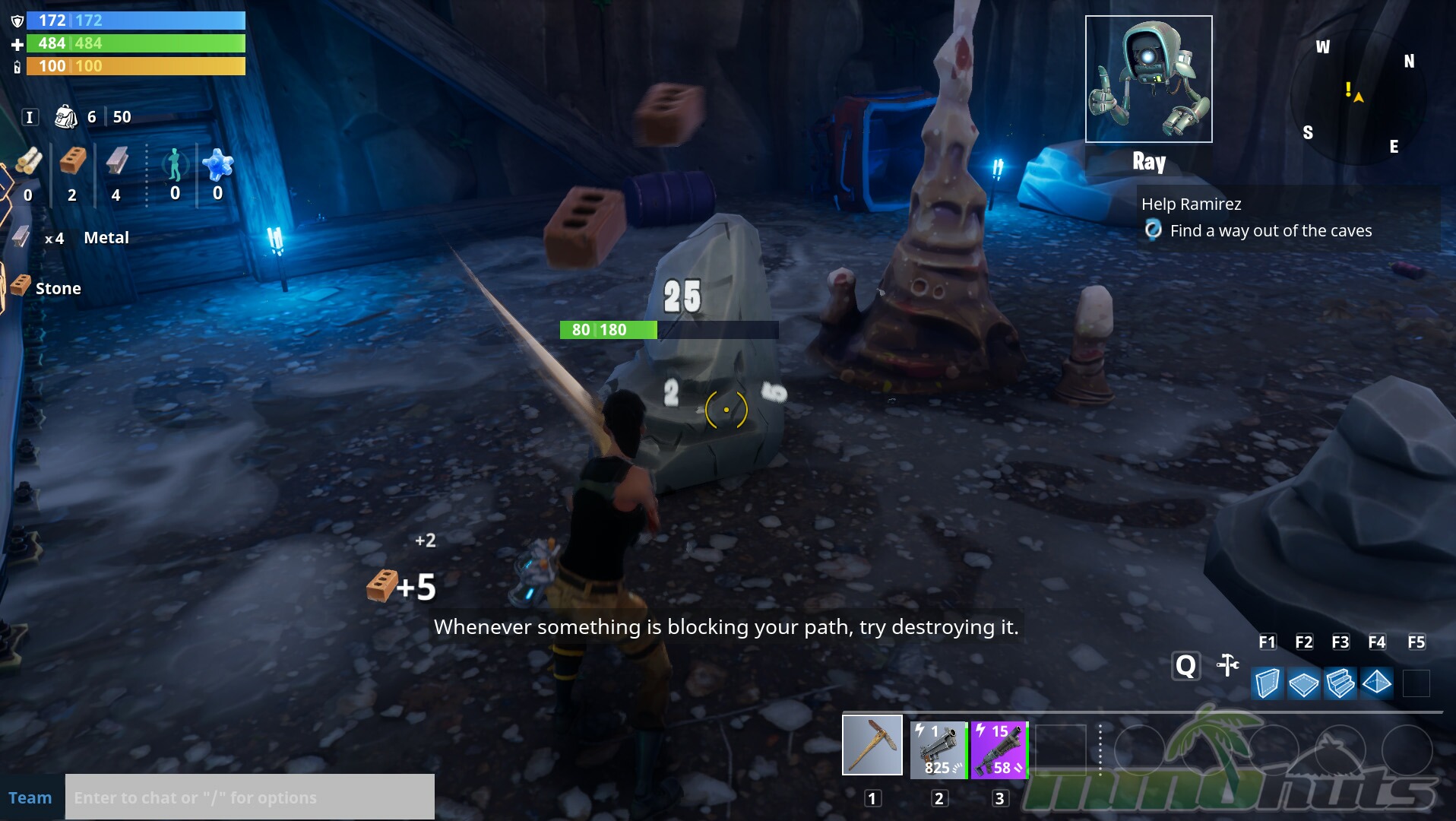 Mining Away For Resources

Without a doubt, Fortnite is one of those games that feels really tedious and grindy, especially in the early stages. You’ll be doing most of the same thing in each stage, usually trying to shoot your way through the husks. However, once you break through Plankerton, the game’s difficulty curve ramps up to “over 9000!” levels. The strategies you’ve set yourself to follow during the early stages won’t work as easily now in levels 19-46. Epic Games is also really pushing you to work with people as the missions were made to not be easily done by solo players (even with defenders).

There were a lot of moments in Fortnite that forced me to actually catch my breath with the way the game just throws husks at you like there’s no tomorrow in the mid to high levels. Even with your gadgets equipped and higher level heroes and abilities, the game really punishes you in each wave. Epic Games needs to find that balance, where players jumping into new level tiers won’t feel like they’re jumping over the great wall of China, before the game’s release. Fixing that would stop people from getting fed up and leaving the game.

One of the biggest issues the game has, at least at the playerbase level, is the misconception that the game is totally open world, where you can build forts and have them stay there till they’re destroyed. The only permanent fort you have are in the four level clusters that you unlock as you finish the story quests. 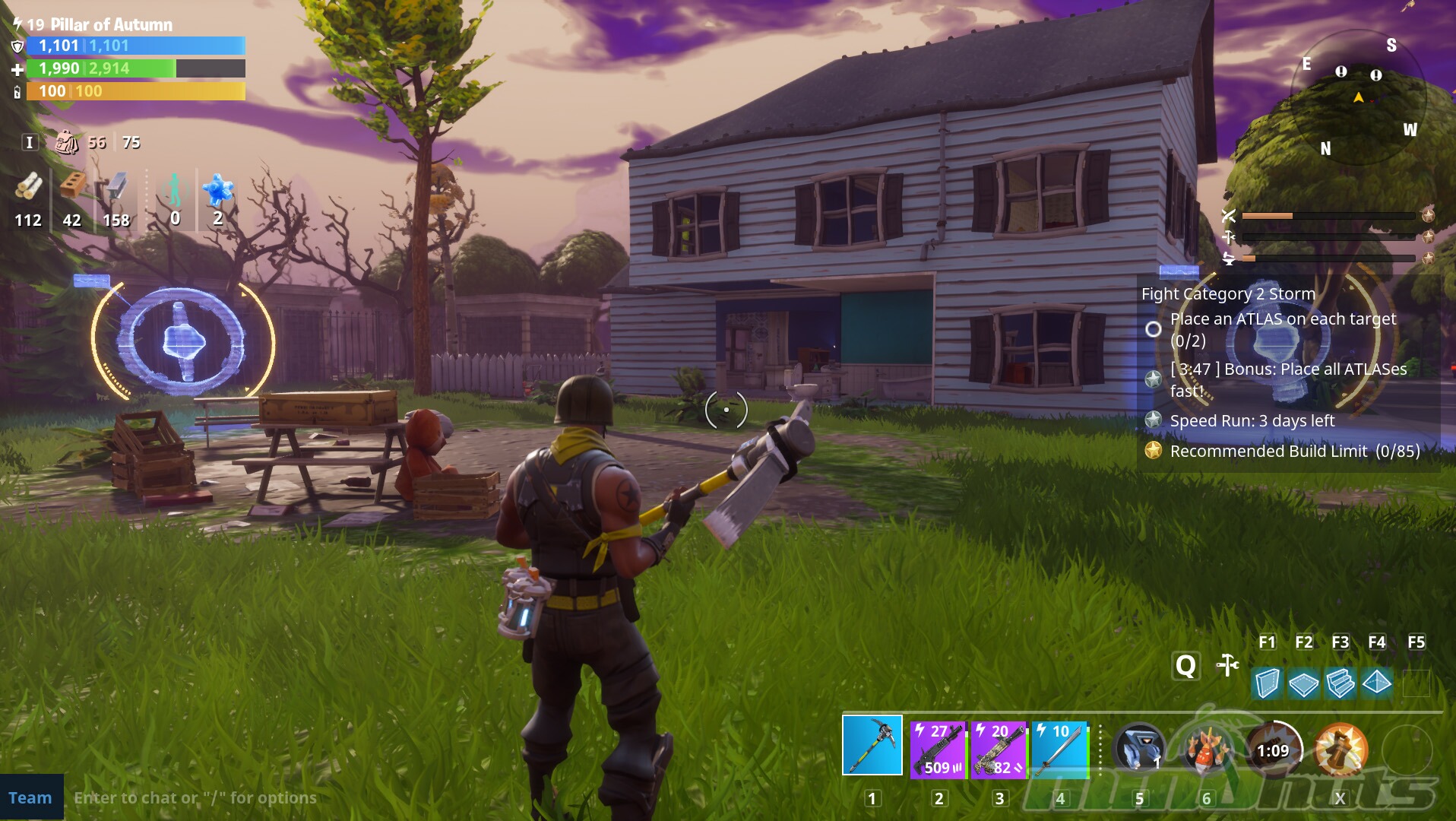 This isn’t really too bad, because it both works with the overall gameplay and fits the world building that Epic Games has presented. What Fortnite brings to the table is different from the preconceived notion, and still works in my opinion.

Fortnite, with all its bells and whistles, is an acquired taste. It’s grindy and stressful at times, but the payoff is the satisfaction of seeing your fort stand strong against the hordes of husks and mists. It’s a game that is better played with friends than solo. However, Epic Games needs to have a workaround with the lackluster matchmaking. While their Discord channel is a good way for people to come together and find groups, it’s always best to have a really solid matchmaking system native in the game instead of relying on third-party software. It leaves an impression that the game wasn’t made with these concerns in mind, which is bad for a title so reliant on party play.

Another concern for me is how the game will stay balanced after it launches. The advantages early access players have is significant compared to those who buy the game at a later date. I think that Epic Games is hoping to have a strong and stable community composed of game veterans before that happens, and it seems they are well on the way to reaching that goal. However, they really need to work on the difficulty scaling and matchmaking for it to appeal to new players come 2018. I hope that they work on these changes before Fortnite’s F2P phase begins.

Note: A game key was provided for preview purposes.