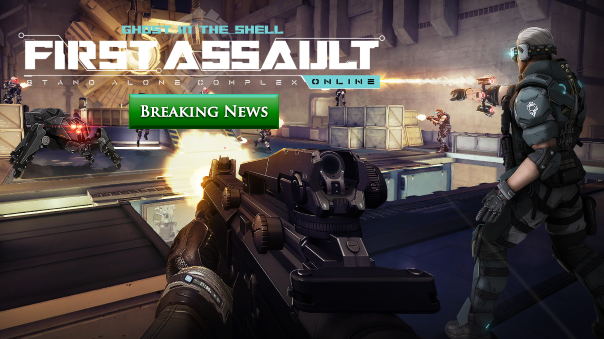 Get your cybernetic augments ready and prepare to dive into the world of Ghost in the Shell once more, as Nexon America and Neople are set to go full steam ahead with the open beta release for Ghost in the Shell: Stand Alone Complex – First Assault Online. For those that can’t already tell from that incredibly long winded title, this is a competitive multiplayer FPS title based on the popular anime series by the same name, which features an elite cybernetic law enforcement team simply known as Section 9, who investigates and fights against cyber-crime and terrorist activity.

While taking a ton of liberties with the animated series, GitS Online includes every feature it can to resonate with the show, such as cybernetic equipment changes and upgrades for your character, tons of augmented skills that can be used in battle, and several different operatives that players can unlock straight from the show, including Togusa, Batou and Major Motoko Kusangi. This game pulls absolutely no punches when it comes to delivering the GitS fan service.

But I’m not quite here to sing the game’s praises, but rather to give you guys a peek into one of the new game modes and features that will be included in the open beta version of the game.

The main attraction showcased in the new version is the Ghost Assault game mode where operative players have to use stealth augments, as well as quick wits and cunning, in order to avoid being chased and caught by cyborg enemy players, resulting in a quick and deadly game of cat and invisible mouse. At first, when I gave this mode a try with a few fellow members, I honestly didn’t have much of a clue what was going on, as I was playing on the robotic terrorist side, just running around looking for enemy players. Not realizing how I was supposed to track the enemy players down, it took me and my team a few lost rounds to finally figure things out: In this mode while playing as the robots, you’ll have a small sonar that tracks the closest stealth enemies nearby. As you follow the sonar, once an enemy player is in range, an afterimage of the enemy will flash red for a brief moment. That will mean that you’re in killing range of the enemy, which you can make short work of using your arm knife weapon. Of course, the enemy isn’t going to let you take them out so easily, so the enemy player can either shoot at you with a pistol a couple of times to either kill you or just slow you down. Each enemy ghost player only has a pistol with a single clip, magazine or revolver speedloader loaded into it, but it’s still enough to take down at least one robot, provided that they don’t miss most of their shots.

Playing as a cyborg, you and your team are going to have to work together in order to trap enemy ghost players into a corner and eliminate them one by one, because once an enemy ghost has been taken out, their cybernetic brain will be exposed within a few seconds, and hacking this brain will disable the cloaking devices for all other enemy players for a short amount of time. With two and a half minutes on the clock, ghost players will have to survive until the time hits zero, and if even one ghost player manages to survive when the time is up, the ghosts players win, so when playing as a cyborg, no enemy can be spared.

Now, when playing as the ghosts, it feels very much a different kind of game, as using your cloak to your advantage is a lot harder than it sounds. Because the robots have a sonar system that can track an enemy’s general direction every few seconds, it means that there’s no generally safe place to hide and just wait out the match. You’ll have to keep moving and be wary of your own teammates’ position, because if they manage to take out just one player on your team, it could easily spell out the beginning of the end for you and your team.

Two major opportunities that the enemy robot team doesn’t have over the ghost team, however, is the ability to hack the cyber-brains of their killed allies in order to respawn all of them back into the game. Of course, that same cyber-brain can be used by the enemy robot to disable your stealth camo, and a good team of enemy robots will more than likely be hovering around the body to their use as bait, so you can’t just walk right up to it and start hacking away. However, if you time and coordinate everything just right with your teammates, you can go ahead and hack the brain up, giving your team a huge advantage.

There’s also the advantage of being able to find primary weapons on the map and use it against the robots. While these primary weapons are not customized for any specific firing style and only have a single clip or magazine loaded into them, it obviously gives a lot more firepower for the ghost players to use in order to defend themselves.

With the several rounds I played in Ghost Assault, I honestly started to get into it more and more. While playing on the Robot side felt like a breeze most of the time once we all knew what we were doing, there was handful of tense, aggravating moments when me and my team just couldn’t track down the last few enemy players that kept eluding us at every corner, as well as the fun, but frustrating moment when an enemy player managed to hack a cyber-brain in time, causing our robot murder fun time killing spree to be undone in a moment’s notice.

And while I was playing on the ghost side, there was so many nail biting moments when I did everything I could to hold on and survive, like backtracking around corners when I felt an enemy was on my trail, juking their movements in between sonar blips to confuse them and throw them off from my general direction and generally just trying to run away like a frightened Japanese school girl.

Still, there’s going to be a lot more to the open beta release besides just a new game mode. Two new maps are going to be included in the game called Headquarters and The Underground Base, along with a brand new operative called “Kuro”, who was designed specifically for the game, but will also be used a link between the game and the actual Stand Alone Complex storyline. Like I said before: they’re not holding back when it comes to pleasing their fans.

Perhaps one of the biggest changes to the game based on user feedback is the Permanent Chipset System. No longer will players only be able to rent chipsets which give a light boost to some stats such as increased running speed or decreased reload time, and not only that, but they’ll also be able to stack chipsets to increase their effects and defects.

All in all, the new changes for Ghost in the Shell: Stand Alone Complex – First Assault Online (Geez, that’s still a mouthful) really help to bring the game up to par with only a handful of quality F2P shooters out there. And if nothing else, it’s easily being made as a game by GitS fans, for GitS fans.

For more info on the game and the open beta, visit our profile page!