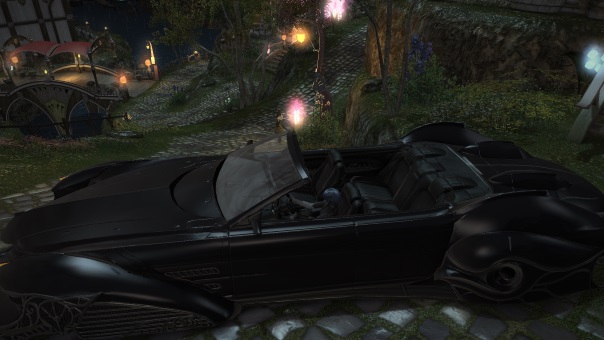 The Final Fantasy XV crossover with Final Fantasy XIV is in full swing in Square-Enix’s MMORPG, and though it is planned to end on May 27th, you still have time to get in, complete the three quests, and earn the best prize of all: The Regalia. The ultimate prize of this crossover is a four-seater mount that plays one of the most mellow Final Fantasy XV tracks. You do not receive the Regalia for completing the quest chain though – that comes later. It does require some MGP (Gold Saucer currency), but I go into that below. The actual quests to get through to the end battle are fairly easy. In order to begin this quest, you must first be level 50 on a DoW/DoM class (so not a crafter/gatherer) and have completed “The Ultimate Weapon” Main Story Quest. The actual quest chain begins near the Aetheryte in Ul’dah (x8.5, y9.7).

Kipih Jakkya is your point of contact alongside Noctis of Final Fantasy XV. At Black Brush, you meet a strange young man with an awesome black car, that being Noctis and the Regalia. The major point of the quest “The Man in Black” has you completing the “Like Clockwork” FATE, which takes place in Central Thanalan (The Clutch). You’ll fight a giant Magitek Trooper/Mech, but even if you’re the only person doing it, Noctis will still help you fight. It’s a pretty cut-and-dry battle, don’t stand in the big AOEs, hit it in the face. You’ll do a lot of traveling around the world with this quest, but there are only three major battles. That was the first one. This first battle’s pretty easy, and the next one is if you just listen to Noctis. You’ll also receive Noctis’ Fingerless Gloves as a reward.

From there, “In The Dark of Night” has you traveling around Gridania, but starts in the same location as “The Man in Black”. Ultimately, you find yourself in East Shroud, and there’s a solo boss fight (thankfully with an assist from Noctis), where you fight Iseultalon. Honestly, this fight is pretty easy too. The fiend has a tail whip it uses twice, and whatever the safe spot is for the first, it will be opposite of it on the follow-up swing. The major point to be aware of is he’ll do a little dance, and behind you, a pair of pillars will appear.. You need to run to those in time, to avoid taking massive AOE damage. Noctis will run to one, and you need to head to the other one. Otherwise, you’ll just take the damage anyway. Not a difficult encounter, Noctis doesn’t take a whole lot of damage in this one. Your reward here is Noctis’ pants. I hope he has extras of these. This is supposed to be a PG-13 game!

“The Messenger of Winds” is the final quest, and here’s where I ran into a bit of trouble. Noctis gives you this quest in The Knot (New Gridania – x11.4, y11.3), and Noctis just wants to unwind. You’ll have a chat with Kipih Jakkya, and after more cutscenes, your goal is clear: Fight Garuda! This isn’t the same Garuda you’ve already fought, this is Garuda from EOS, though it does take place in The Howling Eye. For this fight, you have the power to Link Strike, much like you did in Final Fantasy XV *as* Noctis. Noctis was taking a lot of damage for me, so my strategy was to play as a White Mage, turn Garuda away, and heal him as appropriate. This was a lot safer than relying on him to not take damage (but it can be helped by making sure to stack when required, and turning Garuda away).

The key in this fight is to hit the Link Strike button in rhythm with Noct to deal extra damage. If you get off rhythm, it can be hard to get back on it, but it seemed to just work out for me eventually. Every so often, Garuda does a huge almost room-wide AOE attack. Then you just target one of the Monoliths, Warp Strike to it, and you’re out of range. This is the easiest time to get back onto the Link Strike rhythm for me because you both go in about the same time. The fight took a little longer as a healer, but not by much. It didn’t seem to matter what I was wielding, I did roughly the same amount of damage on Link Strikes. Plus I could Protect/Heal/Regen Prince Noctis. With Garuda dealt with, you receive Prince Noctis’ Jacket and Boots. But what about the car?

Completing this quest chain unlocks the “Ironworks Vendor” in a variety of locations, but I focused on the one in the Gold Saucer (in front of the Mini Cactpot Vendor – x5.2, y6.3). From him you can unlock the Regalia Type-G Title (200,000 MGP), Modern Aesthetics – Lucian Locks Hairstyle (20,000 MGP), and the Noctis Lucis Caelum Card for Triple Triad (10,000). Now, I don’t really play much in the Gold Saucer, so this was a grind for me. Fortunately, I know people who spend time there and pointed the way for me. Completing the Challenge Logs on a Weekly Basis is a great way to build some MGP, but the biggest bang for your buck is to complete the Weekly Fashion Challenge from Masked Rose (x7.2, y7.4). Completing a brief quest will unlock this weekly challenge for you. This is a pretty easy 60k MGP a week, in most situations. Since it’s supposed to be a mystery, the game doesn’t tell you what you need. Fortunately, there’s a Twitter account that knows more than me, Miss Kaiyoko Star. Miss Kaiyoko Star puts up a list of everything you need to know for the Weekly Fashion Report on their Twitter, so if you don’t follow already, go follow (linked below)! Kaiyoko’s weekly guides have been a godsend for me. You have until the end of the month, so if you didn’t go to the Gold Saucer already, get on that grind!