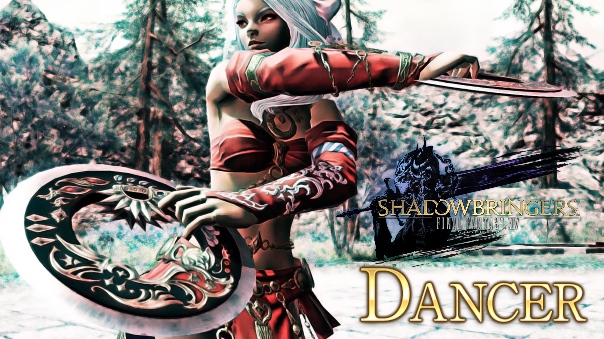 They have style.  They have grace. They’ll throw chakrams at your face.

Fans of the Final Fantasy franchise have mixed views about the dancer class across the series. First appearing in Final Fantasy V, the class was considered a support, using its Flirt and Dance commands to control and disable opponents.  In fact, dances in general have been about debuffing opponents to make them easier to deal with. Even in Final Fantasy XI, Dancers were considered healers and debuffers, so it came as a huge surprise when it was announced the class would be a ranged, physical DPS class for Shadowbringers, akin to Bard and Machinist.  Most expected it would be a healer type, given its role in Square Enix’s previous MMO — myself included.

Instead of the knives its predecessors predominantly used, FFXIV’s Dancer uses Throwing Weapons.  Though throwing weapons is a bit of a misnomer, because every single weapon available to the class currently is a chakram of some type or another, despite tathlums being more akin to sling stones in real life versus their depiction in game.  Also notable is the fact Dancer is no longer a debuffing class. Most classes lost any form of debuff against a monster that wasn’t damaging in Shadowbringers, so this might not be such a surprise. Instead, the class gains some pretty significant buffs they can grant to their party, which I’ll talk about later.

First, though, let’s discuss their main weapon skills, and oh boy is this a doozy.  You have one basic attack chain that looks like this:

Both deal respectable damage, but both have a 50% chance to unlock a second, more powerful skill: Cascade into Reverse Cascade and Fountain into Fountainfall.  The two follow-up skills don’t chain together, since you have the chance to proc none, one, or both of them using your basic chain. So your basic rotation would look something like this:

Is that enough RNG for you?  We’ve only just begun. Reverse Cascade and Fountainfall both themselves have another 50% chance to proc a Fourfold Feather.  This feather can then be used to cast Fan Dance, which is an oGCD ability you can use to weave in between your normal attacks.  You can stack up to four feathers at a time (hence the Fourfold part of the name) So that makes your rotation more like this:

As the late Billy Mays would say, “But wait, there’s more!”  At level 66, you will unlock Fan Dance III, which has a 50% chance to activate whenever you use a Fourfold Feather.  I think you see where this is going:

Needless to say, if you’re not a fan of RNG, you might want to give Dancer a wide, wide berth.  What about their AoE capabilities, though? Surely that can’t be quite as bad, right? Well, that’s where you’re wrong.  Here, have a taste of the AoE combo for Dancers; hopefully you’ll notice a trend:

That’s right.  Windmill and Bladeshower are the base AoE abilities for Dancer, which combo together.  They have a 50% chance to proc Rising Windmill and Bloodshower, respectively. Both of those abilities have a 50% chance to proc a Fourfold Feather, which is used on Fan Dance II for AoE, which furthermore has a 50% chance  to proc Fan Dance III after level 66. Importantly, all of a Dancer’s AoE attacks are considered point-blank, a.k.a. you’ll need to be in melee range of your opponents to connect with any of them, excluding Fan Dance III.

That’s just the basic attacks though.  Surely the class can’t get any more complex, right?  You’d like to think that, wouldn’t you? We haven’t even covered the dances themselves yet.  Dancers have two dances: Standard Step and Technical Step (at level 70). Upon using either, your four basic, single target attacks get changed to four dance steps, you lose the ability to use anything else other than these step actions, your class role actions, or En Avant, which is the Dancer’s movement ability.  You’re then given two steps to perform for Standard Step, or all four for Technical Step, in a random order. So Standard Step may give you the following to perform:

Once you’ve performed the actions, you can use Standard Finish (the same button as Standard Step).  Depending on how many steps you completed, you’ll do a powerful attack (500/750/1000 potency for 0/1/2 steps), and give yourself a damage buff (2/5% for 1/2 steps) for one minute.  Technical step may look something like this:

Upon using Technical Finish, the same thing applies — an even more powerful attack (500/750/1000/1250/1500 potency for 0/1/2/3/4 steps) and a damage buff (1/2/3/5% for 1/2/3/4 steps) to the entire party for 20 seconds.  These potencies may seem pretty high for what’s considered a support class, but given you’re unable to do anything else while you’re dancing, it’s an equivalent trade. Standard Step only has a 30 second cooldown, so you’ll be able to keep that buff up for the entire fight, but Technical Step carries a 2 minute cooldown, so its use is best for when party buffs align.

The real utility in Dancer, however, comes with Closed Position.  This unique ability grants one party member as your Dance Partner, and allows the dancer to share the effects of Standard Finish with them.  It also allows the sharing of Devilment, which is a 20% buff to both Direct Hit and Critical Hit for 20 seconds (every 2 minutes), and Curing Waltz, which is a small 200 potency heal that also heals nearby party members every 30 seconds.  The range on Curing Waltz is infinitesimally small, however, and nearby party members practically means standing on top of each other. Still, for situations where stacking up is necessary, having you and your partner putting out two heals can take some load off of your healers.

Like Bards and Machinists, Dancer also has access to a party-wide damage reduction ability in the form of Shield Samba.  While 10% reduction doesn’t seem like much, it can be a huge chunk of mitigation the healers don’t have to worry about, especially in a full party.  I mentioned En Avant earlier, too, and it would be remiss not to talk about it some more. This defensive ability is a dash forward 10 yalms. Do keep in mind forward is very literal, so if you’re trying to escape a telegraphed move, make sure you’re not actually going further into it.  At level 68, you’ll unlock a trait to store two charges of En Avant — the ability has a 30 second cooldown normally — and at 78, a third charge. Being a ranged class to begin with, Dancer certainly has the tools needed to survive most anything avoidable.

The last two abilities the dancer receive utilize the Espirit gauge that unlocks when you receive the first ability at level 76.  When under the effects of a dance, your Espirit gauge will raise whenever you or a party member uses a weapon skill or casts a spell.  The chances of that actually happening are unknown, but seem to be around 15% from my estimation. Once you’ve reached 50 Espirit (the gauge increases by 10 each time it triggers), you can use it on an ability called Saber Dance, a powerful 600 potency attack – on the global cooldown, mind – that will also hit enemies around the target for 50% of the damage.  After your dances, this is your most powerful attack, so prioritizing it is important.

Finally, at level 80, Dancers receive Improvisation.  For 15 seconds, your Espirit gauge increases only while in combat, and the speed it increases depends on the amount of party members you’re with.  This effect ends if you take any other action, however. That being said, it does have a secondary bonus that will increase the HP recovery of everyone nearby by 10% as long as you’re channeling the ability.  This can be used in several situations where the boss is untargetable, or when your healers need that little extra oomph to make sure everyone survives.

So that’s Dancer, in a nutshell!  It’s random, it’s flashy, and it’s as close to a true support class as you can get in Final Fantasy XIV.  There are no DPS classes in the game that wouldn’t appreciate doing more damage, and with Dancer’s unique Closed Position ability, you can grant their wish at all times.  Technical Step and Finish gives your entire party a boost, giving the class a huge role in any high-end content. It provides a nice bit of mitigation in Shield Samba every 3 minutes, it provides some additional support for healers using Improvisation, and can even provide some light healing with Curing Waltz, even if the range on that particular ability needs some work right now.  While it may not put out the numbers more dedicated DPS classes can, the fact it makes any job in the game better is what drew me specifically to the class. Its RNG certainly isn’t for everyone, but it will certainly attract its fair share of players its pizzazz.