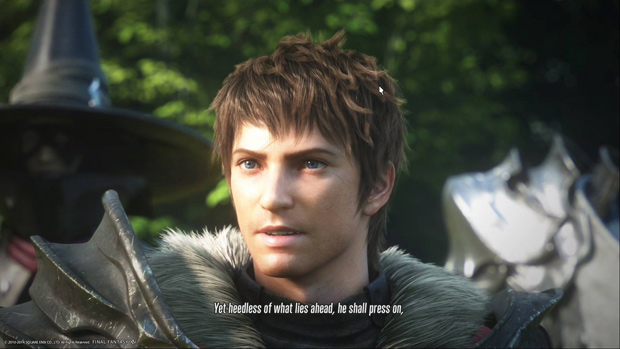 Applying a Mega-Phoenix to a downed ally

Console MMOs are not a new or exciting thing for us as players. The Xbox had Phantasy Star Online; the 360 and PS2 both had Square-Enix’s perennial title, Final Fantasy XI, the MMO that still to this day rages on as proof that console MMOs can still succeed. However, when Final Fantasy XIV initially dropped several years ago, I was not the only player that was horrified with how the game was conceived. In a word, it was unplayable. There were a heap of problems, bugs, and general errors with the game, enough that the president of Square-Enix issued a public apology, and made the game free-to-play while it was being redeveloped from the ground up. 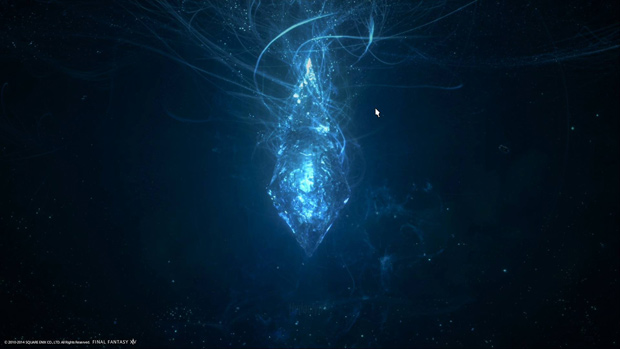 Though many players were leery that the company could not deliver after its initial boondoggle, Square-Enix would not disappoint. Final Fantasy XIV: A Realm Reborn is a beautiful game that, with a bit better marketing, could take the world by storm. It takes some of the things that made Final Fantasy XI so wondrous (being able to play as anything whenever you wanted), and some readapted features of other larger MMOs such as Guild Wars 2 (Fates appearing on every zone) and World of Warcraft (queuing up for dungeons instead of having to walk there and advert for a party). It is worth noting that all players who purchased FFXIV: ARR for the PS3 receive an automatic upgrade for the PS4, if they also own that particular console. 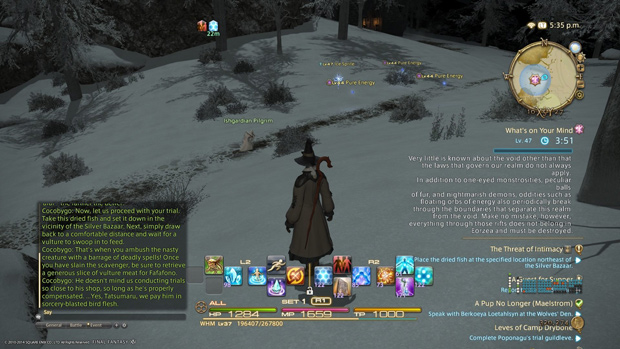 Telegraph in the Time of Cell Phones

While this is a spectacular title on PC, and even on console, it suffers one violent, deadly flaw that, without proper preparation, can make coordinating with others in-game miserable: communication. Voice-Over IP is a powerful tool, with programs like Skype, Ventrilo, and Teamspeak revolutionizing how players organize for dungeons in other games such as World of Warcraft. However, there is no native Voice Chat for Final Fantasy XIV on any console, though many clans do have their own private server that can be accessed on Skype/Vent through your phone or PC. I have to say, having a PC next to the console just to play an MMO is a tad ridiculous. If that’s the case, why not just play on the PC? To PS4 players however, one can still use the console’s built in voice chat if all of your friends playing are on a PS4, much in the way that FFXI players on the 360 could use the console’s voice chat so they could communicate while they play. 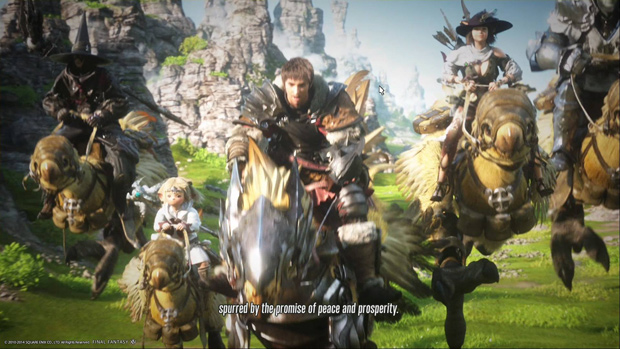 All hope is not lost, however. There is a feature built into the game ported over from FFXI that auto-fills in certain parts of your text, aptly named “Auto-Translate.” Originally this feature was put in place because Final Fantasy XI does not have servers simply for Japanese/French/American players. Everyone played together. So, Square-Enix came up with a system that allowed them to auto-translate important ingame phrases so that all players could understand advertisements and group communication. A rousing success, but a very tedious way to communicate if that is all you have. Fortunately you can also hook a keyboard directly into your PS4, much like you could on the PS3 and chat that way. I highly recommend it, even if you have to get a cheap spare keyboard so you do not have to constantly plug/unplug your PC keyboard. Without voice chat, this will make talking to players a truckload easier. One of the other minor issues with text is that it was awfully small in the first beta on the console. However, you can resize/move your UI around at will, and there’s a helpful how-to on the FFXIV site, located here. 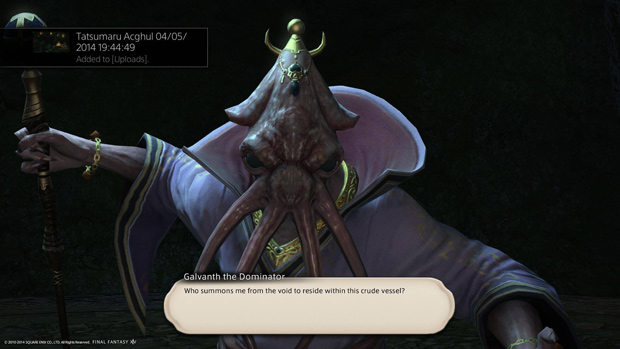 You Can Check Out Anytime You Like, But You Can Never Leave

There are a few things one should be aware of, when you are updating your account from the PS3 to the PS4 version of the game. There are benefits, but there are potential drawbacks as well. I do feel the benefits far outweigh any negative that might present itself. Namely, if you upgrade your account from a PS3 to a PS4 account, you cannot go back. Your account is permanently locked to PS4 consoles. Meaning you can’t log back in on your PS3 if say, someone is playing Call of Duty on the PS4. So this is certainly something to keep in mind before you make the leap. Though it is not all downsides! You gain access to the game days before PS4 users who are buying the game fresh (April 11th, whereas it drops on the 14th). All of your characters, servers, skills et cetera will transfer, since all of the important information is located on SE’s personal servers. However, all macros, aliases, and equipment sets will have to be redone. That is quite the chore as I learned myself, but well worth it. 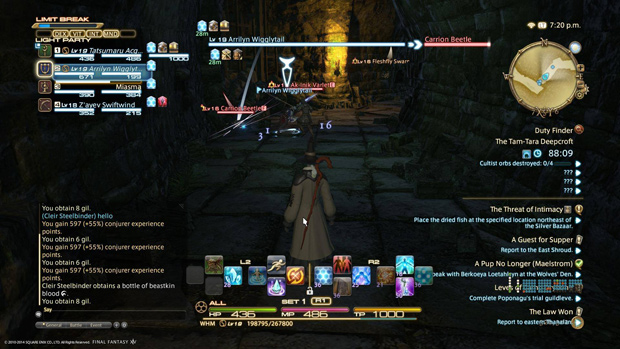 However, the coolest feature to me about playing on the PS4 is owning a Vita. Yes, you can Remote Play FFXIV on your Vita, in the event someone else needs the Television! As long as you have a nice, solid internet connection there is no hassle in using the Vita for your MMO needs. Or in the event you simply do not wish to sit at the TV anymore and might want to lay in bed and play portable; I absolutely loved Remote Play, and am glad to see that FFXIV can utilize one of the fancier features offered on the PS4. 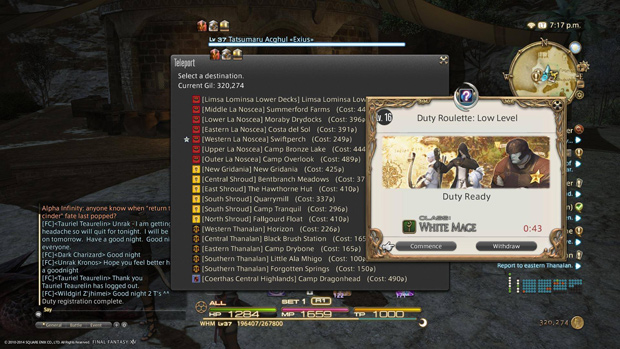 Always A Hill To Climb

There is always a challenge to conquer in Final Fantasy XIV. Just because you hit the level cap does not mean you are done, not by a long shot. Unlike some other MMOs, it is not simply time to do dailies every single day just to farm. Sure, there is farming in XIV (and it wouldn’t be an MMO without it!), but there are simply so many other things to do in the game. You can resume leveling other classes to enjoy trying new things; or you can opt to do other storylines, learning the great lore behind the vast world that Square-Enix has given us as players. There are the Eidolons, and the increasing difficulties such as Hard and Extreme. 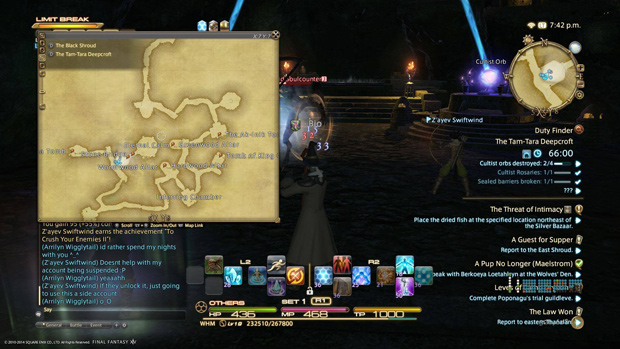 There are always new challenges coming; currently, the Coil of Bahamut quest grows, having just added the “Second Coil of Bahamut.” New storyline quests at various levels have been added to increase our understanding of the saga of Eorza. New trials, new challenges, and not to mention the Lord of the Whorl, await challengers! Rare spawn timers have been adjusted, and combat has improved for players. Entire piles of new items, such as dyes, material, and equipment have been added for everyone to discover. Even housing has gotten some changes! However, housing is still ludicrously expensive without a titanic sized clan to back one up. One of the few things that vexes me about the game is how expensive guild housing is. There is talk of new classes/jobs to come such as Red Mage, but I have seen very little official information. I was admittedly hoping they would appear this patch (2.2), but alas.

The entire host of content updates that came from Patch 2.2 for Final Fantasy XIV can be seen at this link. There is even a transmogrify option (Glamours), which appears to be a more common theme in games thanks to World of Warcraft and Diablo 3. It is an option that I love personally; most every piece of gear for cloth wearers looks plain and drab until level 50. Finally then it becomes worth looking at, unless you are a White Mage. So the option to glamour my gear and make it look different is quite the boon. 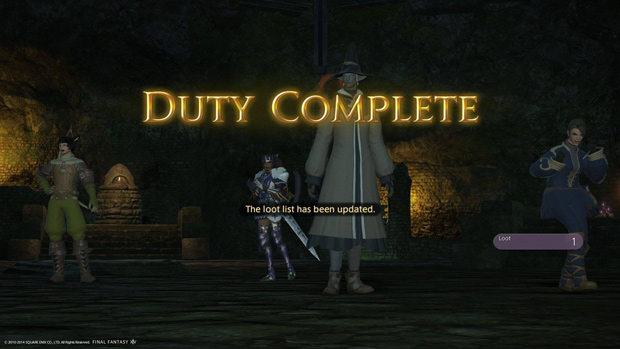 And That, As They Say, Is That.

Final Fantasy XIV is a game that has come a long way from 1.0. I will not be rating this title, as it is simply a first look at a console beta of a game that is already in existence. Later in the year, when it has had time to continue to grow or falter, we will no doubt take another look at it. But for now, I am pleasantly surprised at how far Square-Enix has gone, and I have no doubt that they will continue to back this project, giving it quality content that will wow players for years to come. I cannot wait to see what comes next, whether it is a new class or job, or simply quests and more beast tribes to explore storylines with. A bit more of a social media push could take this game to heights they have yet to even dream of.

I’ll grant you that the UI is incredibly cluttered, but any MMO fan can deal with that, or shrink it down if it really bothers them that much. It is a staple in World of Warcraft, so a little clutter does not bother me personally. No MMO is ultimately perfect; there may have been a few that are close to perfect for their target audience, but Final Fantasy XIV feels like a true title in the series. It promotes teamwork and unity, overcoming impossible challenges and striving constantly for the next big battle. Final Fantasy XI was a step in the right direction, but there was no way for you as the player to solo; well, almost no way. In XIV, you can work alone for most things, but teamwork offers greater rewards for those brave enough to step up.