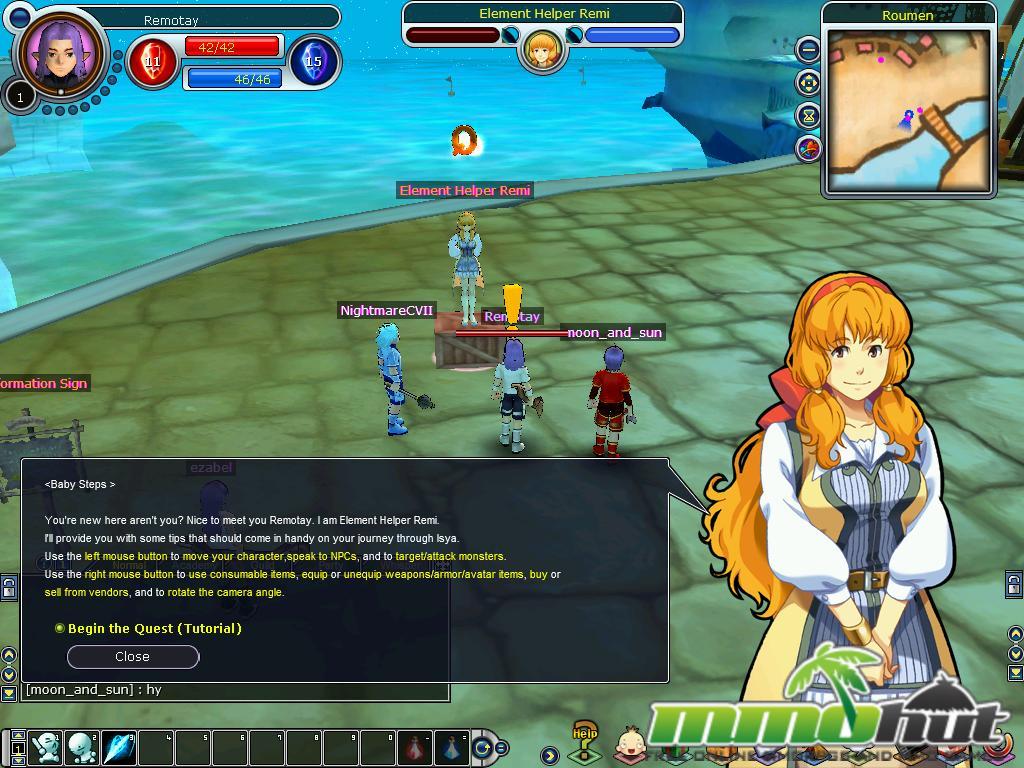 Launched in 2007 in the United States by Outspark, Fiesta is a classic and well-known free-to-play anime-style MMORPG. Similar in ways to Fly For Fun, Asda Story, Dream of Mirror Online, and Mabinogi, Fiesta’s cel-shaded graphics and simple gameplay introduced many players to free-to-play MMOs. After a few years in the MMO market, Fiesta Online is still going strong, and there’s a few good reasons why.

Like any game, getting started in Fiesta Online requires going through character creation process. At the start of the game, you may choose only one of four classic classes – fighter, cleric, mage, or archer – and your gender. Character customization is extremely limited, offering only the chance to change your face, hair style, and hair color, each with only about three options each. For those concerned about the lack of classes, be reassured – each class becomes stronger with advanced classes at level 20, 60, and 100, the last of which offers a choice between two final specializations. Customization also comes in the ability to choose what extra stats are assigned each level in the “free stat” system.

Fiesta’s tutorial system is very limited and hands-on. For new players, a helpful NPC will offer a simple tip on picking up the first quests before sending them on their way. Tutorial tips come along instead with a bird-head alert in the upper right of the screen, offering explanations of each crucial game element, from combat and leveling to upgrading items and the mentor system. The alert also serves a dual purpose to let you know when new quests are available, and from whom. While the bird serves as a helper for those new to MMORPGs, many experienced players may find it aggravating, especially as it appears for each new character. 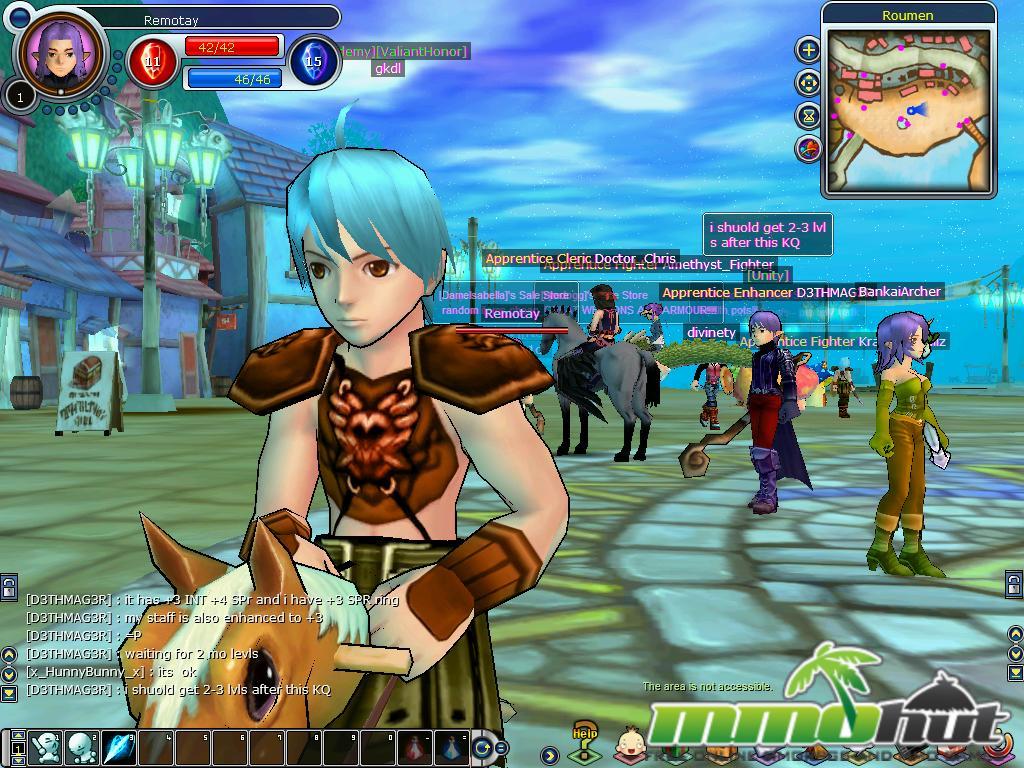 Like many MMORPGs, Fiesta features a quest system to help players level as well as earn useful rewards. However, leveling takes the style of older MMOs, in which grinding is more crucial to gaining experience than questing. In fact, new players will discover this element before level 5; quests are given at a level before they can be reasonably completed by a new player with no assistance. For this reason, many players choose to grind out their early levels and skip quests entirely, as early level rewards are purchasable from vendors.

… and the Value of Friendship

The other option in starting off to the right foot, of course, is to have the help of friends, or at least, the kindness of passing strangers. A mentor-apprentice system exists for high level players to help out lowbies with bonuses for both, which can be one of the most efficient ways for a low level player to earn their experience. High level players may also choose to pass through and offer buffs or free potions and buff scrolls to low level players. Either of these ways can offer a powerful boost to players to make them strong enough to handle higher level mobs without being weak and risking death, or long rests after each enemy’s death. The final point to be made of this is that Fiesta is a game geared primarily for group efforts; solo players will struggle often without outside help or long grinds.

Like many classic MMOs, Fiesta utilizes a skill-on-use system, in which players may both auto-attack enemies and input skills used on an action bar, as they choose and are available. Special HP and SP stones are available to use to restore health and spell points, respectively. In between fights, players can also use “Home” to rest in their mini-house (a mushroom on default), and regenerate their stats. 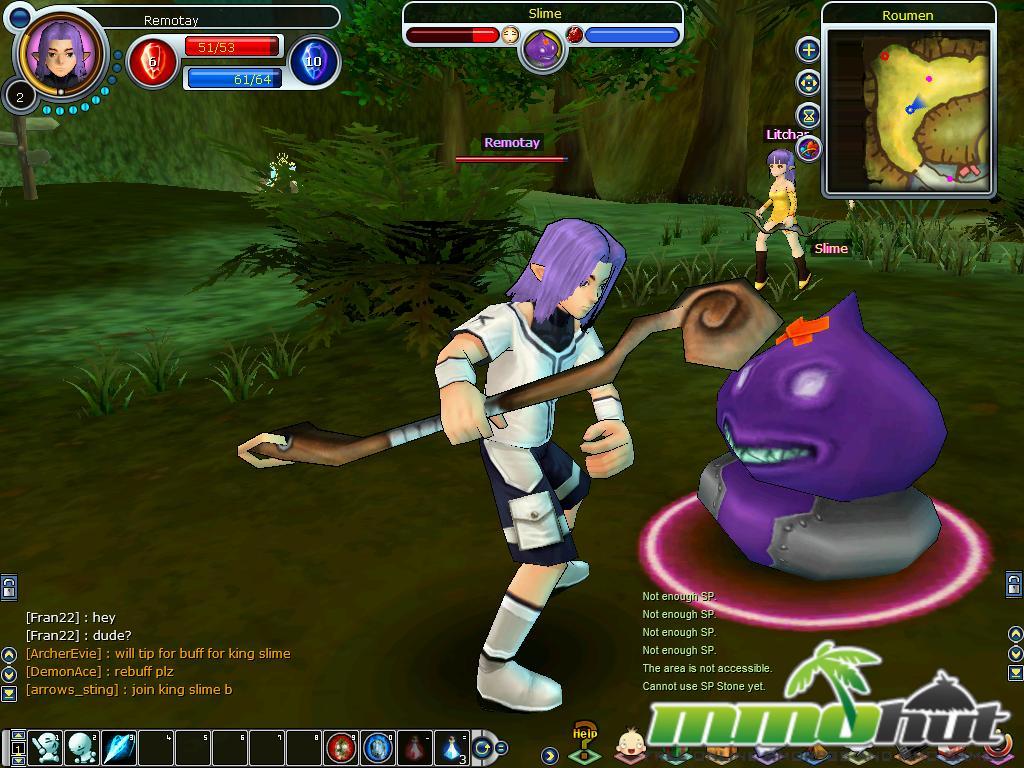 To earn money – used for buying gear and other useful items – players must sell what they find on the enemies they kill. While some “junk” is dropped, most of the items found are useful for the game’s crafting system, called Alchemy. Players can learn professions in this system as soon as they are created, and may choose two total professions from five – allowing them to produce enhancement stones, potions, scrolls, or change items into a higher or lower quality.

There’s more to do than grind, quest, and craft in Fiesta, of course. For players who prefer PvE, Kingdom Quests become available every two hours. Designed for players anywhere from level 5 up and separated into level spans, they can be joined individually or with a party. Each quest has its own victory conditions that can be achieved by the players inside within a set time limit. Each player inside will earn a present box if they are successful, and may earn anything from materials, scrolls, and potions to enhanced and rare equipment.

For PvP fans, once reaching level 20, several different zones become available for player versus player battling. Each city has its own battle zone, and several battlefields also become available. Guild wars are also available for those who are socially inclined to join a guild and participate in group PvP. The player versus player experience is only designed for showing off skill, and sometimes earning items and other perks like titles; experience is not rewarded.

Fiesta is easy to get into, with plenty for players to do in both PvE and PvP. It makes a particularly good introduction to free-to-play MMORPGs, with an active and helpful player base and plenty of regular maintenance from its publisher. What holds Fiesta back mostly is its grinding nature: any player who hates grinding is going to find Fiesta boring or frustrating. If you don’t mind a balance between grinding and quests, and enjoy a game that rewards cooperative gameplay, Fiesta has a lot to offer.