An Extraordinary New Hero Arrives in Star of Heroes 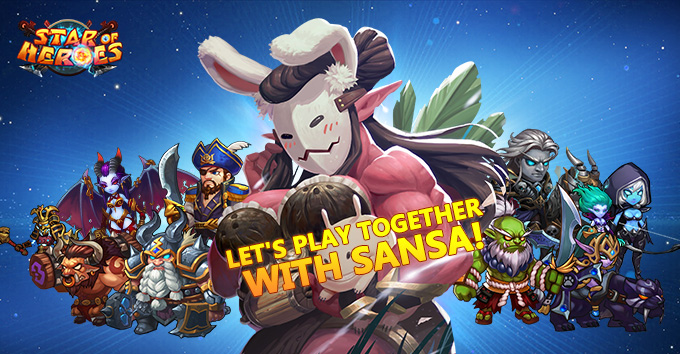 Star of Heroes is excited to announce the release of its brand new hero at 9:30 a.m. GMT on July 8, 2016. Every player will have an opportunity to get this new hero by engaging in LOYGAME’s event: https://www.facebook.com/starofheroes/.

New hero Sansa is an extraordinary front row tank with impressive healing skills. She is the only hero in Star of Heroes that can build a shield for every ally and convert these damages which are absorbed by each shield to HP. Recovering HP for the weakest ally instantaneously is another charm of her. As a front row protector, Sansa not only holds off attacks from enemies but also causes severe damages to front row enemies by striking and stunning them with her shield. The other unique skill of her is to enhance her power by absorbing and utilizing the radiance of the moon. Players who get Sansa will surely be unbeatable on the battlefield if they choose the right allies as a powerful team.

Every player will have a chance to win this remarkable hero for free by taking part in the game’s facebook event, “Share to Win Sansa”. Players will receive 100k gold (in game currency) if they share the new hero post with friends and write down their server name as well as in game name under this post during the week-long event. Lucky players who are chosen by Star of Heroes will be rewarded any of the top three star heroes among Sansa, Swordmaster, Disc Knight and Fox Spirit.