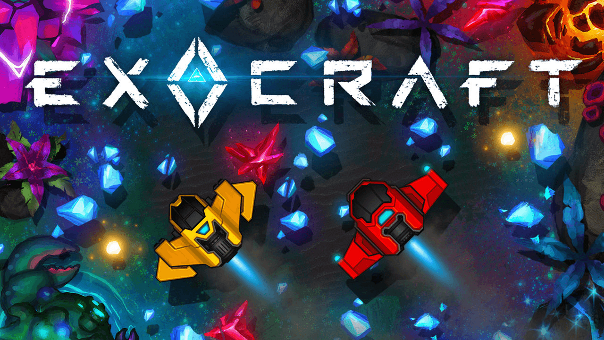 That’s probably a big part of why I was originally drawn to Exocraft. The core gameplay essentially revolves around building a bigger and better spaceship as time progresses. Now, this is something you can definitely do, but it’s going to either require an inordinate amount of grinding, or just biting the bullet and buying some of the game’s premium currency, Gems.

Gems are the only thing you can purchase from the cash shop, but they’re used pretty much everywhere in the game. They can also be obtained through game play, which means the game isn’t, by my standard definition, pay-to-win, but it really does push the envelope of that definition, due to just how slow you obtain the useful currency without spending real cash. That being said, the game itself can be fairly addictive, and I hate to just tell people to stay away. Sometimes a little mindless grinding can be cathartic or relaxing after a long day. If that’s the sort of thing you find enjoyable, or you don’t mind kicking a few bucks to the devs to support the game, then perhaps Exocraft is something that you’d enjoy. Let’s break it down into some specifics.

You start with a very basic ship. You have a cockpit, some wings, a single drone bay, and a single cargo hold. Each of these contributes to your ship’s three statistics: defense, offense, and cargo space. Now that you’ve got your ship, the game prompts you with a brief tutorial to get you acclimated with the game’s systems, such as buying, installing, and upgrading new parts, harvesting crystals and gems, and painting your craft.


There are quite a few pieces and options, but it gets very expensive, very fast.

The tutorial is adequate on these points, and the game’s basics are very simple and easy to understand. Your goal is to fly around and harvest crystals and gems from nodes, then return to base where you will sell the crystals for currency. Which is called crystals, but whatever. The nodes come in two forms: salvaging wrecks, and mines. The wrecks of ships dot the landscape of the nameless planet you’re on, and you can harvest them without opposition. This makes them a good early source of income, as your starting ship won’t be terribly powerful at first.

Whether mining or salvaging, the harvesting of crystals also relies heavily on the use of elementally charged drones. These drones operate in opposition to the guardians of the crystal mines in a rock, scissors, paper sort of fashion. The three element types are fire, water, and electrical. Water puts out fire, electrical zaps water, and… fire.. Um… burns electricity? Well, again, whatever, it’s just a game, it doesn’t need to make total sense.


The team bonus occurs when more than one person attacks a node. You don’t need to be in any sort of group. Doing so results in higher payout for everyone, but each person gets their own reward that others can’t touch.

When you first buy drones they’re rather small and feeble. As you mine nodes and attack guardians they will become more powerful. They’re not invincible, though, and the guardians will attack not only your ship, but the drones as well. If the drone is defeated you have 24 hours to visit the drone bay to revive it. Whether or not this is worth it is rather questionable, as purchasing a new drone costs 25 gems, but reviving one is 75 (both with a crystal price attached as well, but this is less relevant. Gems are much harder to come by.) So you have to ask yourself if the levels obtained by the drone are worth the increased cost of reviving, or if you’re not just better getting a fresh one and starting over.

There’s more to drones, yet, however. In fact, drones are really the most complicated bit of the game, so I pray you bear with me. Upon reaching 4 stars, a drone may evolve, if you have a power core with which to infuse it. Evolving takes a good deal of time, but can be accelerated by using gems. In fact, I had an 8 hour evolution pending when I last played, and each subsequent evolution takes more and more time. The game really seems to try to nudge you towards purchasing gems. Sometimes more aggressively than I like.

When drones evolve, they change not only their stats, but also their appearance. In fact, they sometimes even begin to appear like the guardians of the planet. Maybe this is a hint as the the origin of the drones? I dunno, there’s really no story going on here at all.

Seeing as bay slots for additional drones is quite expensive (again, the cost increases, I believe based on the number of bays you have, but it could also be based on the level of your captain, I’m not sure), evolving them is a good way to increase your strength without needing a whole new drone.

Another facet of the game is the fact that you’re not actually limited to one ship. You can buy additional slots in your fleet starting for 500 gems. Seeing as you can buy 600 gems for $9.99 USD, this is a pretty pricey endeavor. As I said, you could harvest the gems through game play, and pending you don’t have to pay for any replacement drones, and you decide not to add any pieces to your primary ship (or replace any if they’re damaged through combat), you could probably harvest up the 500 gems you need in a good 5-6 hours.

And this is where the game just falls apart for me. Everything. Requires. Gems. Even, as I mentioned before, painting your ship. Which, mind you, you’ll need to do regularly, because the pieces you buy from the shop, or find through gameplay, are all different colors. So either you look like a unicorn took a dump and your ship came out, or you burn through gems.

Despite this, I did see a few higher level players with some pretty cool ship designs buzzing around the game. It’s obvious that some people feel compelled to play it. I never did ask anyone who was higher level if they bought gems, but I have a distinct feeling that’s the case. As for me, I think I’m pretty much over it after a solid seven hours or so that I put in for the review. Exocraft is strangely addictive for a while, but it wore off for me. I actually kind of wish it was a phone app, as I think laying in bed and playing it would be a good way to fade off to sleep (and I really don’t mean that as an insult, I pretty much play games to fall asleep every night, as it distracts my brain from my otherwise racing thoughts.)

It doesn’t have an early access tag on Steam, but it has a large number of bugs that can detract from the gameplay, mostly to do with enemies being indestructible. There are ways around this (mostly involving recalling your drones and going to another node), but that’s not an excuse. These same bugs have been around for over a week while I’ve been checking the game out.

Also, when I was working on other things, and didn’t log into the game for a few days, the dev(s?) actually sent me an email asking why I hadn’t logged back in. I felt this was frankly really creepy and stalkerish. Like a guy showing up at a girl’s house when she wouldn’t return his phone calls. At this point, I really just feel like telling them, “It’s not me, it’s you.” Overall, I’m going to give Exocraft a 1.5. I feel like it’s going to have a certain appeal to a very small audience, but for most people it’s better to just skip this one.