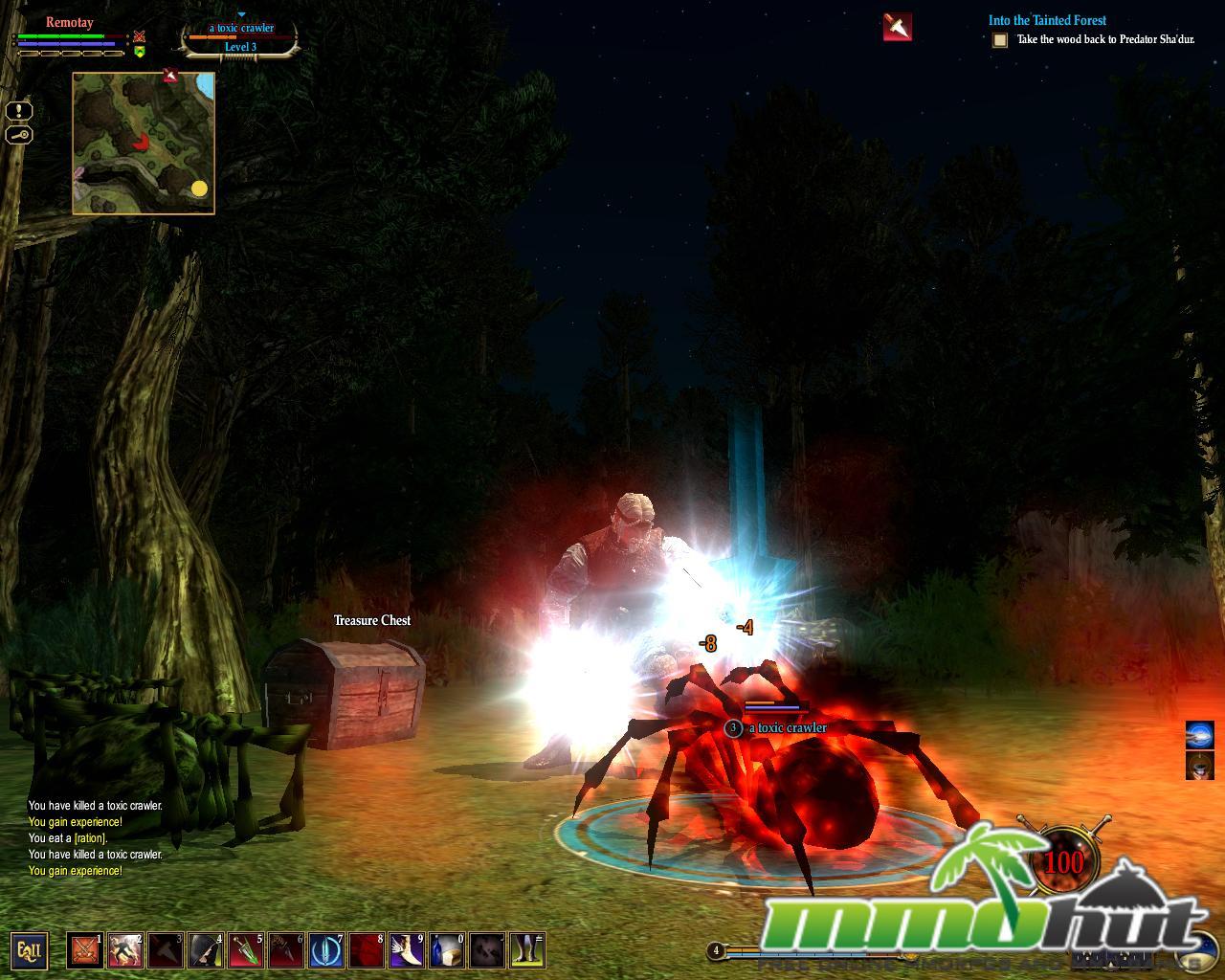 EverQuest II is an entirely new MMORPG that is was based off the original ‘EverQuest’ game. It features vastly improved gameplay and graphical elements from its predecessor as well as voice acting for some of its NPCs. Frankly, I applaud the folks over at Sony for deciding to make a new EverQuest game rather than just releasing another expansion, as the original game today already has some 14+ expansion packs, with more on the way! To be fair though, at the time of EverQuest II’s release, the original only had 12 or 13 expansion packs. If you’ve played the original EverQuest before and didn’t like it, I strongly recommend giving EverQuest 2 a chance, as the game is vastly superior to its predecessor in nearly every measurable way. The game has enjoyed countless updates and tweaks since its launch in 2004 as a subscription based MMORPG. Since August 2010 though, the game has relaunched as a free to play game with a cash shop. The free to play version does have its restrictions, and is dubbed “EverQuest II: Extended”.

Like the original EverQuest, EverQuest II is set in the same fantasy world of Norrath, but set 500 years after the first game, in a sort of ‘parallel universe’ rather than a direct sequel. Nearly all of the notable places of the first game exist in EverQuest 2 with the addition of several new places to explore as well. Story wise, EverQuest II takes place in a period of time dubbed the ‘Age of Destiny’, where Queen Atonia Bayle of Qeynos, a benevolent sorceress, works with her allies to rebuild Norrath. The overlord of Freeport however, Lucan D’Lere, rules the evil forces in the game in order to conquer the world. One of the game’s most interesting aspects is that the world of Norrath actually feels alive, as NPCs actually talk amongst themselves and guards patrol the town. Listening in on NPC conversations is usually pointless, but sometimes quests require it, which makes the world feel alive. Many of the game’s quests actually involve interacting with NPCs too – not just clicking “next, next, next” like most MMORPGs. The interactions are usually pretty fun, as different choices in dialogue can lead to different outcomes.

Players start their adventure in the world of Norrath by first creating their character. Like the original EverQuest, EverQuest II offers an enormous amount of variation in terms of playable races and classes. A lot of game’s races and classes are aligned with a particular faction. The game has six ‘good’ races [Dwarf, Fae, Froglok, Halfling, High Elf and Wood Elf], six neutral races [Barbarian, Erudite, Gnome, Half Elf, Human and Kerra] and lastly 7 ‘Evil’ races [Arasai, Dark Elf, Iksar, Ogre, Ratonga, Sarnak and Troll] for a total of 19 playable races. The game also has an incredible number of playable classes, with some classes being restricted to certain alignments. Even so, there are a whopping 24 playable classes in EverQuest 2. All I can say is wow! The sheer amount of variety in this game is simply astonishing! I should mention though, that free users only have access to eight of the 24+ classes in EverQuest II and four of the 19+ races. The race and class restrictions are pretty major, but hopefully more variety will be offered to non-paying players. 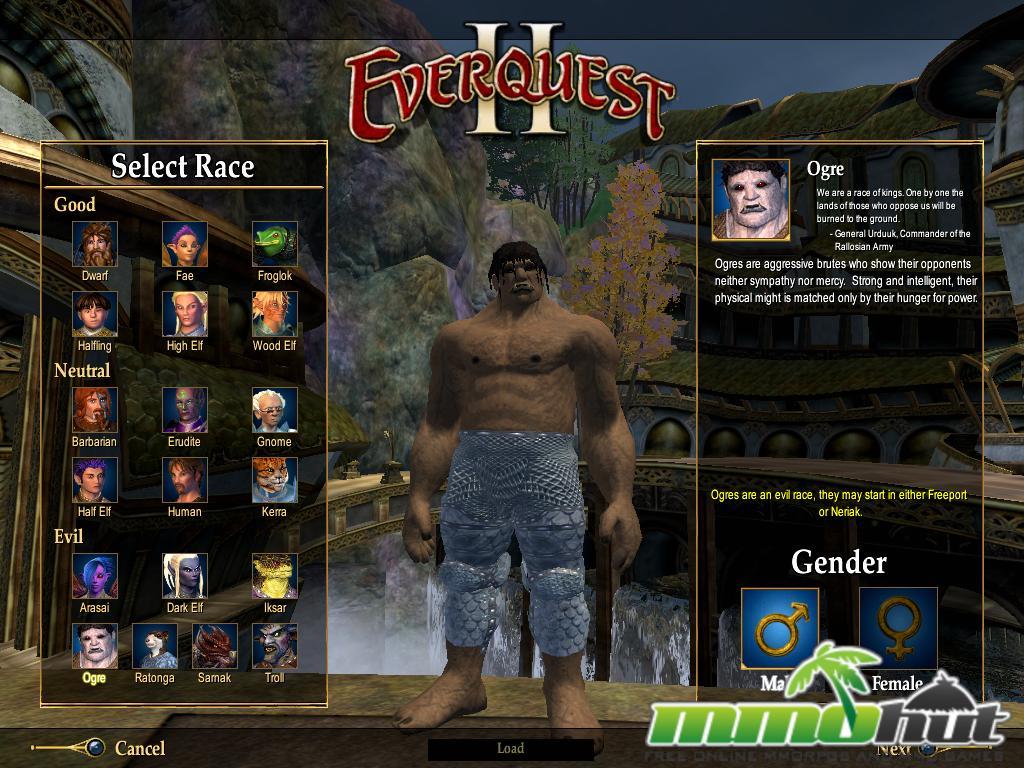 One enormous improvement in EverQuest II over the original game is the faster paced and smoother combat. I remember that the original EverQuest had combat that felt buggy and broken. Luckily, EverQuest 2 has combat that feels a lot more like World of Warcraft, as combat feels incredibly smooth. Gameplay for ‘melee’ oriented classes has also been drastically improved with the addition of numerous combat skills. I remember that the original Everquest didn’t really have specific ‘combat skills’ for melee classes which made playing any non caster class incredibly boring, as the only thing a melee class could do was auto attack, and that’s it. Seriously. I’m not kidding. All a warrior did was auto attack and wait. In EverQuest 2, melee classes have many skills they can use while fighting. Skills are automatically learned as you level up as “apprentice” rank skills. Players can upgrade each of their skills by obtaining and scribing higher rank skill scrolls into their spellbooks. Each rank is basically a stronger version of the same spell and the scale goes Apprentice, Journeyman, Adept, Expert, Master and Grandmaster. Free to play users cannot improve their skills beyond the “adept” ranking. Much like the original EverQuest, World of Warcraft and Alganon, as players fight they’ll gain skills in things like “Defense, Crushing and Focus based on what weapons and skills they’re using. On the PvP front, EQ2 originally launched with very limited PvP, but today offers much more variety in the form of battlegrounds, arenas and duels. PvP isn’t a major focus of the game, but it’s there for those who want it.

One of EverQuest II’s strongest aspects is its in depth progression system. Aside from leveling, players can improve their characters in numerous different ways. Firstly, every single race in the game has several racial abilities. On top of this, each race has its unique set of “traditions” which players can learn once every 10 levels. Think of “traditions” in EverQuest II as a separate talent tree. Since players only receive one “tradition” point every 10 levels, it’s impossible to learn every ability in the “tradition” tree, which helps make each character unique. As players level up they can further develop their characters by unlocking character traits, which permanently boost one attribute, every 8 or so levels. Again, it’s impossible to have every character trait, so no two Half Elf Wizards are the same! On top of this, players can continue to learn new class-specific abilities every 10 levels starting at 14. Once reaching level 14, Wizards for example, will have the option of learning one of four spells (Immolation, Solar Flare III, Ice Spears II and Firestorm). Players can only learn ONE of these skills and only one of them. Upon reaching level 24, players will be able to chose from four new spells. On top of all this, starting at level 10, players can convert some of their experience points into Alternative Advancement (AA) points, which can be used to learn special skills and abilities. There’s a ton of variety in the alternative advancement department, which allows players who reached maximum level to continue advancing. You can see from the way the game is designed, that no two characters are identical. The sheer amount of skills, traditions, and alternative advancements make EverQuest II one of the most in depth and varied MMORPGs ever.

The fact is EverQuest II is loaded with quests. There are literally more quests to complete in the game than anyone has the time to do. Well maybe not anyone, but still. I remember that after I completed the game’s tutorial area and entered the city of Qeynos I saw literally dozens of quest NPCs eager to give me tasks to do. After walking outside of town to fight some monsters, I saw numerous guards who were also quest givers. Practically everywhere I looked I could easily find a quest to complete. The quests in Everquest II, like many MMORPGs range from traditional ‘kill X amount of Y monsters’ to ‘deliver this package to the guy across town’. Sure most of the quests aren’t too innovative (some are!), but there are lots of them, which is certainly a good thing. You’ll never need to out-right grind, as there are always quests that need to be done. 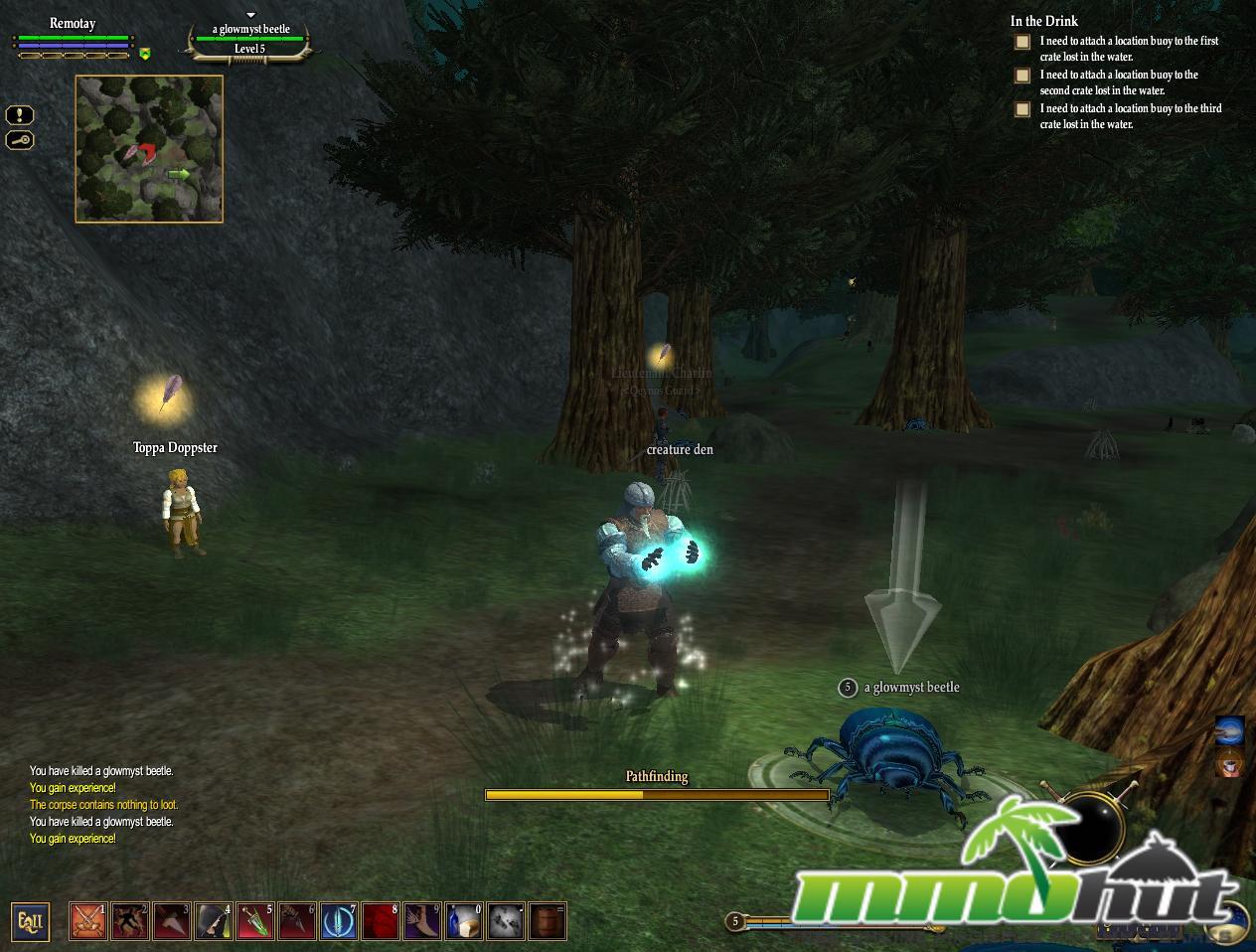 EverQuest II has a crafting system that can easily compete with the crafting systems in pay to play games like World of Warcraft, Ultima Online and Dark age of Camelot. The way crafting works in EverQuest II is rather simple. Players can learn a trade skill at level 10 and 20. The game has 14 trade skills ranging from weapon smithy to carpenter. For a full list of trade skills just check out the Wikipedia page in the ‘links’ section. Players can easily sell their newly crafted goods in the game’s marketplace, which acts as an auction house. Raw materials for crafting can be obtained by gathering them or killing enemies.

While playing EverQuest II, I did notice a few drawbacks. The free to play restrictions are rather annoying. They range from minor nuisances like caps on the amount of gold your character can carry and chat restrictions to major things like restricting certain races and classes. One of the my biggest complaints is the restriction on skill ranks. There’s a huge difference between “adept” skills (The maximum rank free users can learn) and “grandmaster” ones. Another issue worth mentioning is that game is pretty demanding. You’ll need a fairly high end computer if you expect to be able to run this beast without lag, especially if you expect to run it on a high resolution.

EverQuest II is easily one of the best free to play MMORPGs out there. The game has a boat load of content, an incredible amount of variety, an enormous game world and some of the best character customization in any MMO. Free to play users have must deal with several annoying restrictions, but it’s not a deal breaker. The game also has top notch graphics and sound, so if you’re looking for a fun fantasy MMORPG, EverQuest II is certainly worth the download.