EVE Online Sees the Return of The Guardian’s Gala 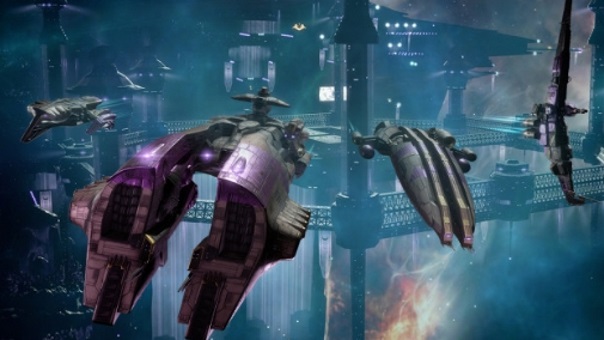 Starting today, players in EVE Online can take part in this year’s Guardians’ Gala, which has them fighting off the fierce pirates of New Eden, while also earning exclusive rewards in the process. Last year, the Guardian’s Gala was set upon by capsuleers, and this time, the Angel Cartel are back, and more prepared than ever to do battle. Otuwiri and Khaitetha have sworn vengeance on the capsuleers after last year’s humiliation and will be laying in wait for unsuspecting pilots who think they can make a quick few kredits by crashing the party. This event will last from February 12-25th.

The New Eden Store will also offer rewards in honor of Valentine’s Day, such as new Spirit SKINs for additional hulls, Agency Combat Boosters, Facial Augmentations, modules and more, for the duration of the Guardian’s Gala event. Taking out both Gala hosts and outlaw attendees will secure points that can be used to claim rewards via The Agency.

CCP Games have also announced the introduction of CCPlease, which is a high-level visual roadmap to provide players with an overview of upcoming quality-of-life fixes, improvements and more on the way to EVE Online. It is a part of CCP Games’ commitment to providing concise, clear information on EVE Online. More info on CCPlease can be found in this link. EVE Updates on the other hand, will continue offering a detailed insight into each content update.

This month’s update to EVE Online, released today, provides a number of such quality of life tweaks, including the ability to share broadcast settings and overview filters, along with the ability to copy current industry jobs lists. Players will also benefit from improvements to finding items in their personal assets, as well as the addition of a hit point percentage display for drones.

“The Guardians Gala is one of our most popular recurring activities that sees a lot of participants from our community each year,” said Paul Elsy, Senior EVE Universe Community Manager. “This time around, capsuleers can get their hands-on exclusive rewards such as SKINs, Cerebral Accelerators and Facial Augmentations upon challenging the Cartel’s finest combat pilots.”