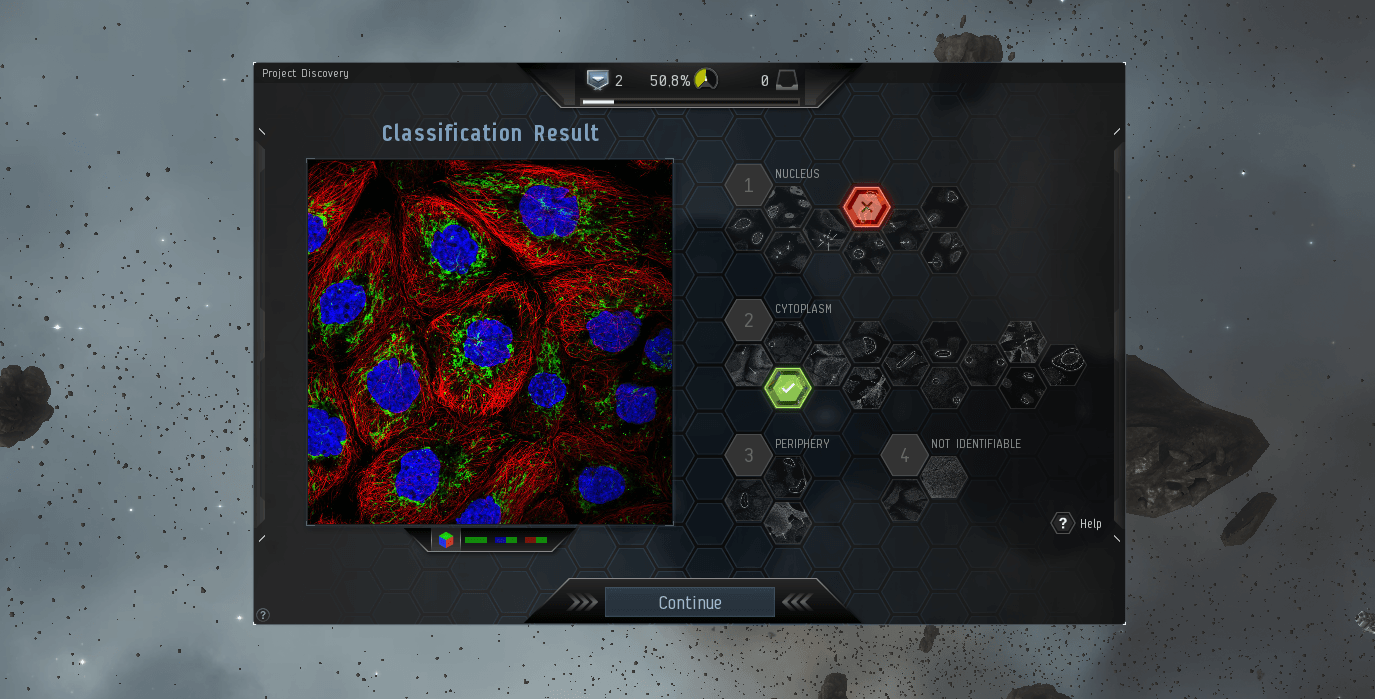 CCP Games, in cooperation with the Human Protein Atlas, MMOS (Massively Multiplayer Online Science), and students from Reykjavik University , has brought the ability to contribute to real-world scientific research to the gaming sphere in a fitting and scalable way within the perfect setting for such an effort—the thousands of solar systems of the massive universe of New Eden.

Many endeavors in scientific research require substantial amounts of human processing on enormous sets of data. Examples of such processing include annotating images to indicate where anomalies are present (e.g., finding stars in an image of the night sky) or classifying images into one of several categories. Performing such tasks computationally is very difficult, but non-experts can learn to do so proficiently with only minimal, example-based training. Project Discovery leverages the “human computing power” of players in EVE Online.

“We were approached by MMOS to see if we could leverage the incredible human capital of EVE player intellect to contribute to scientific research and we were immediately thrilled at the prospect,” said Andie Nordgren, Executive Producer for EVE. “To see it finally get out of a very successful testing stage and into the hands of hundreds of thousands of players worldwide is a proud milestone for us. We hope our example sets the stage for many other successful collaborations between science and gaming to come.”

The Science Behind Project Discovery
The human body consists of 100 billion cells that, for each individual, carry identical DNA. The DNA within your cells provides the genetic code for 20,000 genes that are translated into proteins. It is these molecular building blocks of your cells and how they are expressed in your various tissues that define who you are.

Project Discovery is done in co-operation with The Human Protein Atlas, a Swedish research project. Researchers at The Human Protein Atlas are working to identify all proteins our genes are coding for, and their spatial pattern of expression, to ultimately understand their function and connection to disease. Their goal is to create a map where proteins can be identified in different cells and different organs. Over 13 million images of cells have been generated and those images need to be analyzed for them to achieve their goal. Recognizing patterns in all those images would be a massive undertaking for a small team of scientists, but if a large number of gamers participate by playing Project Discovery that task is much less daunting.

Players of Project Discovery will be helping the scientists to understand protein function in cells by recognizing patterns in protein localization within colorful fluorescent microscopy images where specific proteins have been marked with fluorescent probes called antibodies.

Participants categorize protein patterns from images of cells into different categories of structures in the cell that belong to the nucleus, the cytoplasm and also the periphery of the cell.

There are no pre-requisites for contributing to Project Discovery, so everyone from EVE trial-players to savvy veterans can play. There is also no requirement to participate as part of the overall experience of playing EVE—those happy to use their spaceships for solar domination may continue to do so without participating in Project Discovery. Controls are in place to verify the validity of crowd-sourced results through consensus comparison and other methods, and new items have been added to the Sisters of EVE loyalty points store to spend accrued analysis kredits on new items including unique clothing and a new type of booster.

There were other big changes in today’s EVE Online release, including: