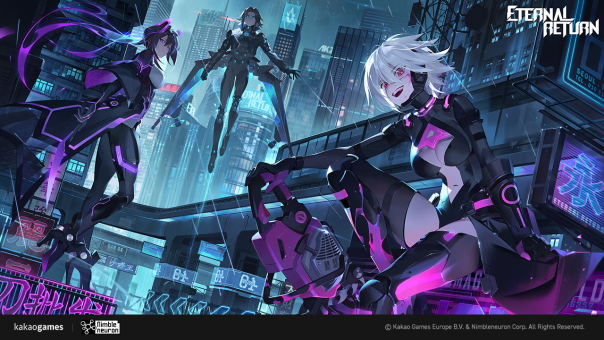 Kakao Games and Nimble Neuron are delighted to announce Season 7 of Eternal Return will be launching on September 1, with players able to begin unlocking content from August 18.

Season 7 – also known as Neon Aftershock – will come with a new Season Pass. The rewards include new exclusive skins, in-game items, and many more rewards. Additionally, a Season 7 pack will also be available, which comes bundled with the Season Pass, 4 new characters and 12 skins, emote, tombstone and an exclusive Pass skin. The pack will be available with a 70% discount until the new season launches on September 1.

Neon Aftershock will introduce a new escape mechanic, which will only be available in Ranked matches. To add some diversity to battles, players have the opportunity to escape! By discovering an exclusive item when looting slain animals or air supplies, players can create a Rootkit that will help them access the escape area.

Depending on how many people you play with, the way escaping works operates differently. For solo players, up to two players can attempt to escape, but may duel one last time before leaving the island, or come to a mutual decision to escape together. If playing as a team, every team may move into the escape area. However, only one team is allowed to escape the island safely.

Along with the exciting new mechanics, an array of additional changes will also be coming in Season 7. The in-game stat Skill Amplification will now calculate damage stats in a more intuitive and simpler way. Players can also find 7 new one Augments added to the game to customize their loadout in new ways.

Finally, improvements have been made to players’ Saved Plans, along with the added ability of the map providing guidance on where to go on Lumia Island in order to complete the player’s build.