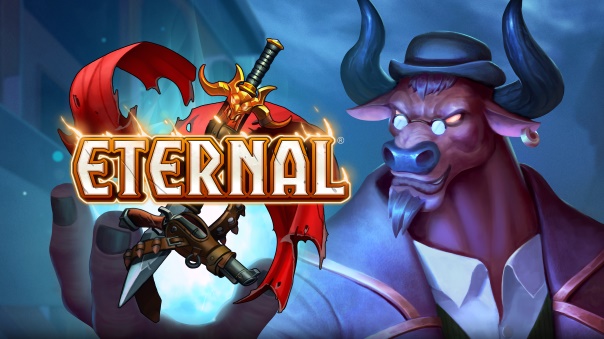 One of the biggest things I hear about CCGs (online or otherwise) is that Card Games are “Pay to Win”. Many people think that simply by having great cards that they’re always going to win. Dire Wolf Digital has produced a card game in Eternal that will certainly feel familiar to fans of Hearthstone and Magic: the Gathering, but stands up on its own with new card traits, a fun fantasy setting, and a system that I’ve found to be generous in terms of acquiring new cards. I met some of the Dire Wolf Digital developers of Eternal a few years back, when Eternal was still in development, and really enjoyed what I played/experienced. The only reason I did not dive in is because I tend to dive in too deep to CCGs, and have to be careful.

It’s not the best card game I’ve ever played, but it really made an impression on me with how easily I received cards/packs, and the freedom to build whatever deck I desire. The goal is the same as most other CCGs – beat the opponent down to 0 life, with a deck of 75 cards. Players play Sigils that add an overall Mana Pool, and give “Reputation”. That’s one of the only requirements to play cards – certain cards will have sigils on them, denoting how much Reputation of a faction/color is needed to play the spell.

Something that is both a pro and a con, depending on how much card game experience you have, is the Tutorial. It’s in-depth and very long. I’ve heard people have been turned off by that because they “know how to play a card game”. But I did see Keywords (card abilities) in this game that I had not seen before, so it was good to have a practice ground to try these out with. The tutorial takes you through stages as one of the main characters of the franchise, and while it was annoying at first to be hand-held through every important step and feature, I wound up appreciating it. Though I have played CCGs since the mid-90s, and though this game does feel familiar, it’s not the same as Hearthstone, not the same as Magic. So this ultimately helped me feel at home with the flow of a standard match, the types of cards I’m bound to come against, and the RNG of this game. Eternal’s RNG is one of the only major drawbacks to the game – with a 75 card deck, it can feel impossible to get the cards you feel like you need in any given situation. If you aren’t consistently getting your Sigils or creatures that can give you Sigils, matches will stop going your way pretty damn fast.

Eternal’s system consists of Five Colors/Factions, Multi-Faction Cards, and Neutral Cards that can be used by any Faction. Each has its own style and many will feel familiar in style from other card games. Each Faction has their own Units (Creatures), Attachments (Equipment), Sites, Spells, and Power Cards. Then, of course, there’s rarity – Common (Grey), Uncommon (Green), Rare (Blue), Promo (Purple), and Legendary (Orange). The rarity of a card is easy to see, with a colored border around the artwork. Right now there are also nine sets of cards in the game, coming to 1051 cards, according to Numotgaming’s Eternal Card Index.

It can be very daunting to enter a card game with so many potential cards and deck ideas, especially one that uses a Shard/Dust system (known as Shiftstone). Dust Systems are my absolute least favorite style of CCG; I’ve really grown used to MTG Arena’s Wildcards, which let me craft any card in a rarity that I need. While this can certainly feel overwhelming, there are quite a few ways to get cards and card packs. The biggest thing for me, though, is that the card packs give 12 cards in them, instead of the smaller 5-8 other games are offering. There are also plenty of cosmetics to spend money on, and bundles for new updates. Speaking of updates, what could be the best feature for Eternal is this: When cards are changed/updated/nerfed, the game will let you know that you can break down those cards for their full value for a limited time. If they’re no longer useful to you, you can get rid of them and use that Shiftstone on something else.

So before we get into the flow of the game, where else can you get cards? You have single-player options to unlock more cards, which I think is a definite boon. There are several Single-Player Campaigns that unlock more cards. Some of these Campaigns are free, whereas the Premium Campaigns cost either Gems or Gold. Each win in those Campaigns will unlock a playset of cards, and these cards are unique to their campaign. Thankfully, you can see exactly what card sets you’ll receive in these campaigns. You can also spend additional gems to turn these into Premium Cards. It doesn’t make them better, but it sure makes them look cool. Many of these campaign battles have extra conditions to them, such as both players receiving a Time Sigil with every passing turn, extra damage, and other challenges. These will require you to consider carefully how each battle is approached and can certainly make you a better player if you keep these moments in mind. Next is the Gauntlet, which is free. You take a deck you’ve created, and battle a series of increasingly more challenging AI opponents. Each victory will give you a chest, which will have gold, cards, perhaps even card packs in them. There are seven battles, and you go until you lose twice or win them all, whichever comes first. The final single-player option is the Forge. This is a Draft Mode (2500 gold or 250 gems), where you build a deck from new cards and do battle with AI opponents. For those who prefer to Draft versus other players, the Versus Column has “Draft” where you build a deck out of four packs, and compete against other players. Then there are Events, Casual, and Ranked. In order to access Events, you need to play five Versus Matches.

Deckbuilding is fairly intuitive and easy to get into. You can build a deck with one color, or five colors, that’s entirely up to you. But it’s important to be aware of what the Reputation cost for the cards you’re using is. I recommend doing some research on popular styles of play and what each Faction’s style is. None of the factions have a unique trait that no other faction can use, but the creatures and spells certainly have a style their own. There are Sigils that give more than one Reputation (up to 3 types at once), and that can be used to see what factions have synergy with each other. At the end of the day, you can do just about anything you want in Eternal. So here’s a brief rundown of each faction:

Now that you’ve built a deck and have tested it a few times against the AI, the actual flow of gameplay is pretty simple. Both players draw 7 cards, and have the option to mulligan down to 6, if the hand they pulled isn’t suitable. There’s the Main Phase, where you play a Sigil (if you have one), and cast Spells/Units/et cetera. During the first turn, cards in your hand with “Pledge” can be cast as Sigils instead. Units that are summoned can’t attack the first turn they’re played unless they have Charge. Then players have the option to attack the other player, and defensive creatures are picked. From here, Fast Spells can also be cast if any affect combat. Flying creatures can’t be blocked by non-fliers. Then the second Main Phase, where spells and units can be cast. Ultimately, Eternal plays out like a standard CCG, but with a considerably vast library, tons of keywords to learn, and plenty of solo play if you aren’t up to PVP. That’s one of the major draws for me. Sometimes I want to play a card game, but I’m tilted from a few losses, so instead, I’ll play against the bots, and practice.

I’ve had a very positive experience getting into Eternal. It’s available on Xbox One in addition to PC, and it plays great on both. It has so many options for ways to play, build, and approach the game. I’m not crazy about 75 card decks personally, because as I said earlier, one of the big problems for this game is finding the right balance of Sigils to Cards, and actually *getting* the cards you need. So while you can build five-color decks, I have had the most success with two to three colors. I also want to point out that their pre-con decks you unlock are actually really solid decks. I’ve been playing a lot with “Feln Cunning” Pre-Con, which actually features several Legendary cards. Now, they’re no match for decks with tons of high-level/high-power cards in them that also synergize with each other, but I’ve won more than I have lost with the pre-con decks.

That’s definitely a point in their favor. Those decks have helped me figure out how I want to approach my own personal deckbuilding. While I do wish there weren’t “Premium Campaigns” that cost real money, because they really do give pretty solid cards without having to use Shiftstone/Card packs, it is still helpful. Since this is a free-to-play game, it’s a good way to support the game and get useful playsets. You can also gain card packs and gold simply by playing certain factions. As you play, you’ll level up the factions you use, which is ultimately beneficial. Can you get amazing cards by spending real money? Of course, you can. But will it give you the knowledge to know what to do and when? No, that’s only by spending time in the game. Eternal is an amazing card game, and I look forward to seeing what else Dire Wolf Digital has up their sleeves. Not to mention that it’s 100% crossplatform, so you can take your collection anywhere you go.

Real Money was spent on Eternal, but it came out of the reviewer’s pocket. Eternal is available on Steam, Xbox One and iOS.