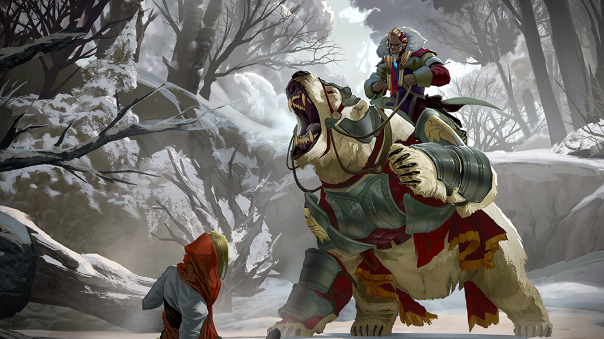 Dire Wolf Digital released a new expansion for their free-to-play digital CCG, Eternal today. Known as Defiance, this expansion adds 278 cards, and offers three exciting new card mechanics to explore: Pledge, Amplify, and Renown. Pledge cards can be played as Sigils on their first turn, Amplify will let players increase spell effects, based on their existing power, and Renown abilities can be activated as soon as a spell or weapon card is directly played on it. Sites were also introduced in Defiance and is a new card type that produces three spell cards. Upon completion, its affiliated Hero card can be summoned. The Defiance expansion tells the story of the fate of the Kosul Empire, as its exiled heir Svetya prepares to reclaim her crown and avenge her family.

The newest expansion will cap off a busy month in Eternal with the game’s official release on Steam and Xbox One. Eternal also saw the introduction of its esports program with a $5,000 cash tournament that will ultimately culminate into a $100,000 World Championship.