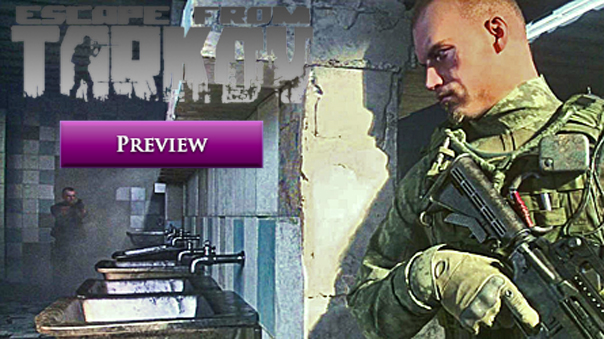 Escape from Tarkov is finally away from the dreaded “NDA”! That means not only can we talk about it, we’re going to! The first question to be asked is, “What’s Escape from Tarkov? I mean, we’ve seen videos, footage, but…“ Escape from Tarkov is a survival/shooter with MMO Elements, with a sort of session-based shooting feel to it. But it’s not session-based per se’. You have a main story, where you complete a scenario. The scenario will have several “raids,” which are open areas with several exits, that you have to survive. These exits will be based on storyline, so I imagine depending on what you do, they will change. Completing one will unlock the next, and completing them all will unlock a Free Roam mode, on a huge [15 sq. kilometer] map. You can also return to earlier areas for more quests, missions, loot, or to continue murdering other players! This game takes place in an area called Tarkov, a fictional city in Russia. You play as either the Russian or American faction [or as a Scav, but that’s supposed to be a lot harder and not necessarily recommended], and it’s probably the most intense game I’ve ever played. 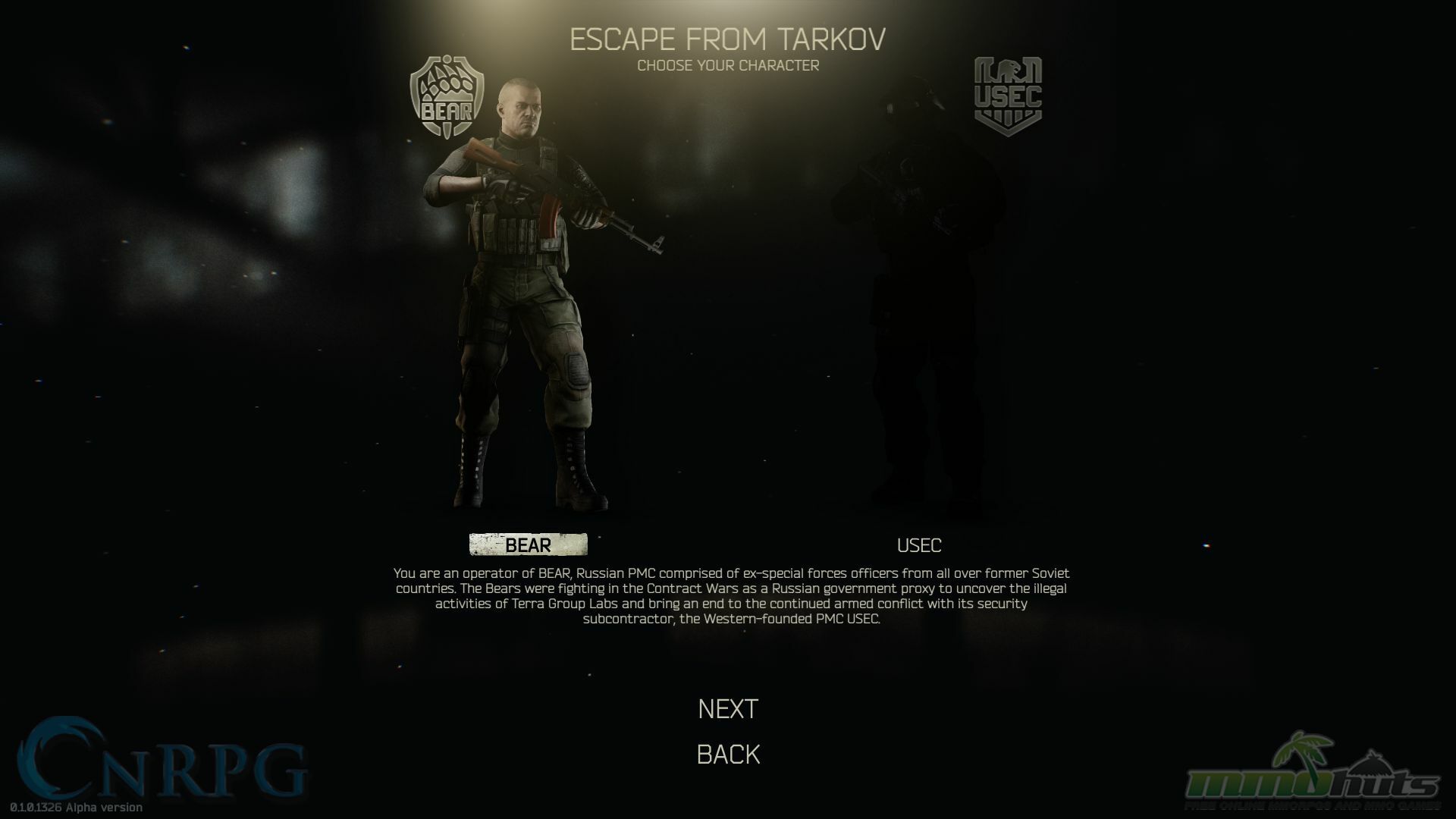 Seriously, ever. I’ve played pure PVP games before, and MMOs where you can be looted [Hi, Ultima Online!], but if you die in online mode [the Alpha has an offline/PVE mode but that is just for testing purposes], you lose everything that you brought with you. I cannot stress that enough. There’s no going back, hoping that no one looted you. You have one life, and you can’t get back into the session. That’s the end for you, comrade! You don’t lose all of your items, because you have a collection of stuff, but any Rubles, maps, ammo, medkits, all of that stuff is gone! Now other players can loot you, but I don’t know the specifics. I assume they’d get all of the stuff you were carrying. But while we’re talking difficulty and intensity, you can suffer from illness, starvation, dehydration. You can catch hypothermia, or you can die from injuries sustained such as the following: falling from rocks, catching on barbed wire, or a bullet to the head. 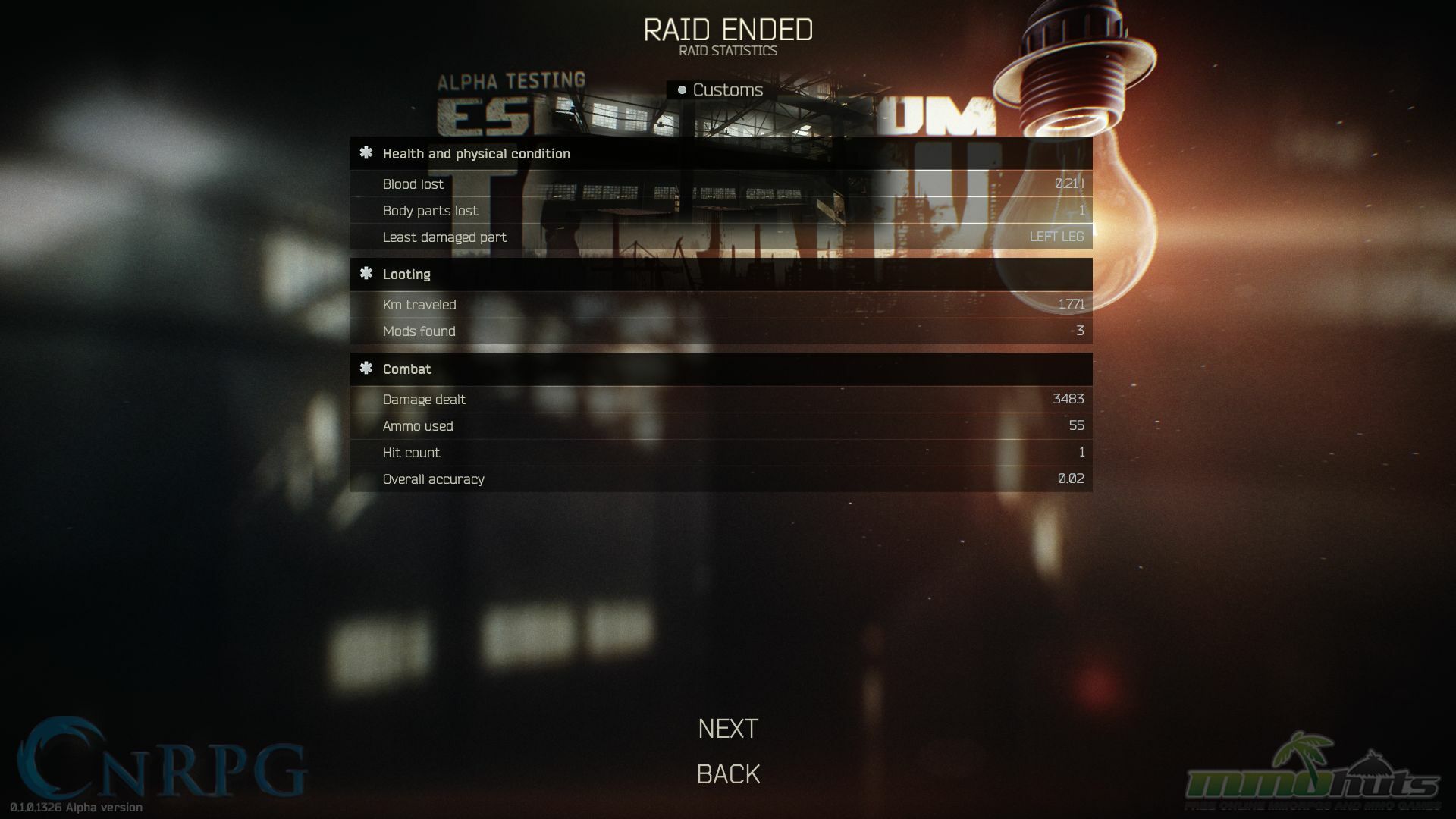 This is a dangerous world they live in, and the dev team truly capture the hopelessness and dread that fills this world. Everytime I heard a bullet fire off in the distance, I tensed up. The sound of boots scraping across gravel made me wonder if it was a friend or a foe. There is no mini map, no hand-holding, no hope. The combat’s intense, but you can hide behind cover, crouch, or drop prone. You don’t “stick” to it like Gears of War though. I have noticed that open gunfire tends to be very quick. If you land shots, people die pretty damn fast. And if you run into a group of Scavs, NPC or PC, it’s incredibly dangerous. I tried to be cool and drop prone, with a sniper rifle. A bit of lag happened, and I fire up into the clouds. Now I’m laying on the ground, in a field, and three Scavs with AKs are there. Can you guess the outcome?

But how does it work, exactly? You select a zone, and will be entered into a matchmaking queue. Both factions will spawn in, and from what I understand, players can go in as Scavs to try and kill either side. The raid locks, and other players can’t enter if you log out/rage quit/get murdered. If you do quit, you automatically lose anything you found, or had on you at the time. They take quitting very seriously, because this is a serious game. It’s no CoD, no Battlefield, no Verdun. This feels more like real life than anything I’ve played for a shooter. 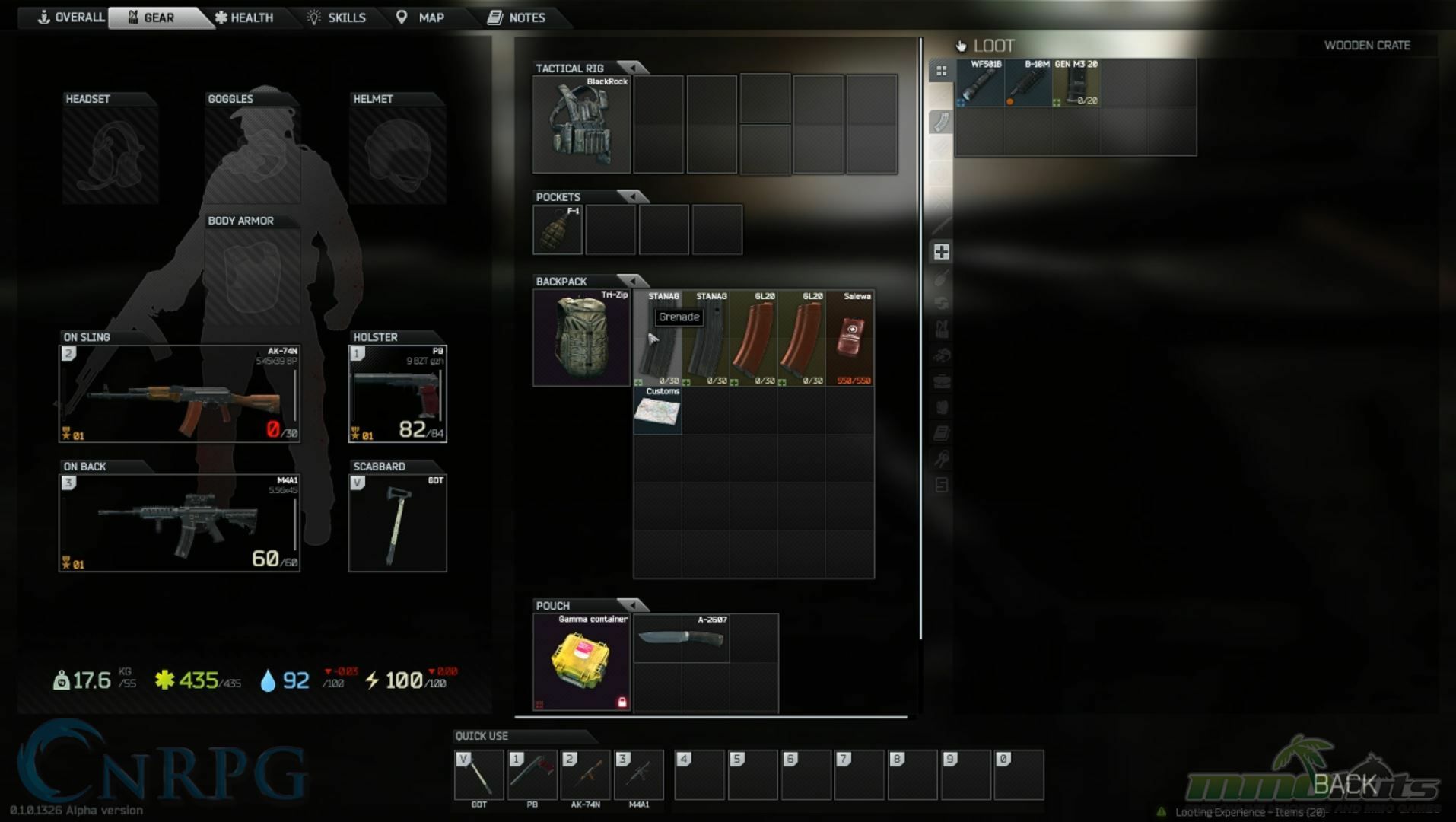 The goal is to escape, and you’ll likely have to work as a team. There won’t be an “Offline” easy mode that I can see. You have to go stage by stage, progressing, fighting forward without dying. It’s the ultimate game of survival. The game has no regeneration or healing factor. If you break a bone, scrape something, start bleeding, I hope you have something to take care of it, like some fashion of medkit! Otherwise, you have to deal with it. You can give friends one of your medkits, thankfully. But other than that, you better get to the end, or kill the other team first! There are no safe spaces; unless you survive. The only space that is safe is one that’s not in a raid.  If you’re in a match, you better play safe and smart. I mean, you can lose blood pressure if you bleed too long and I can only imagine you’ll die from bloodloss. I had a point in time where I had spent half an hour wandering alone in the dark with no players anywhere in sight and no flashlight [because I lost my only one in a previous death and didn’t buy another], and wound up tangled on a bit of barbed wire. I thrashed and struggled against it until I died.  Or the time where I was exploring out in the wilderness one afternoon, and fell to my death, breaking both legs from a long fall from a rocky outcropping.

Once you survive with your loot, [or die horribly and lose everything], depending on how you performed, how much stuff you looted, you gain exp to gain levels and learn skills [Which are not available in the Alpha!]. You only have one character for now, but it seems like maybe you can play one per faction. There is a locked slot for now. You can grow in power, and acquire really fantastic, unique/rare weapons, but it won’t mean a thing if you aren’t good with them. This isn’t going to give you homing bullets, or any fantasy nonsense. 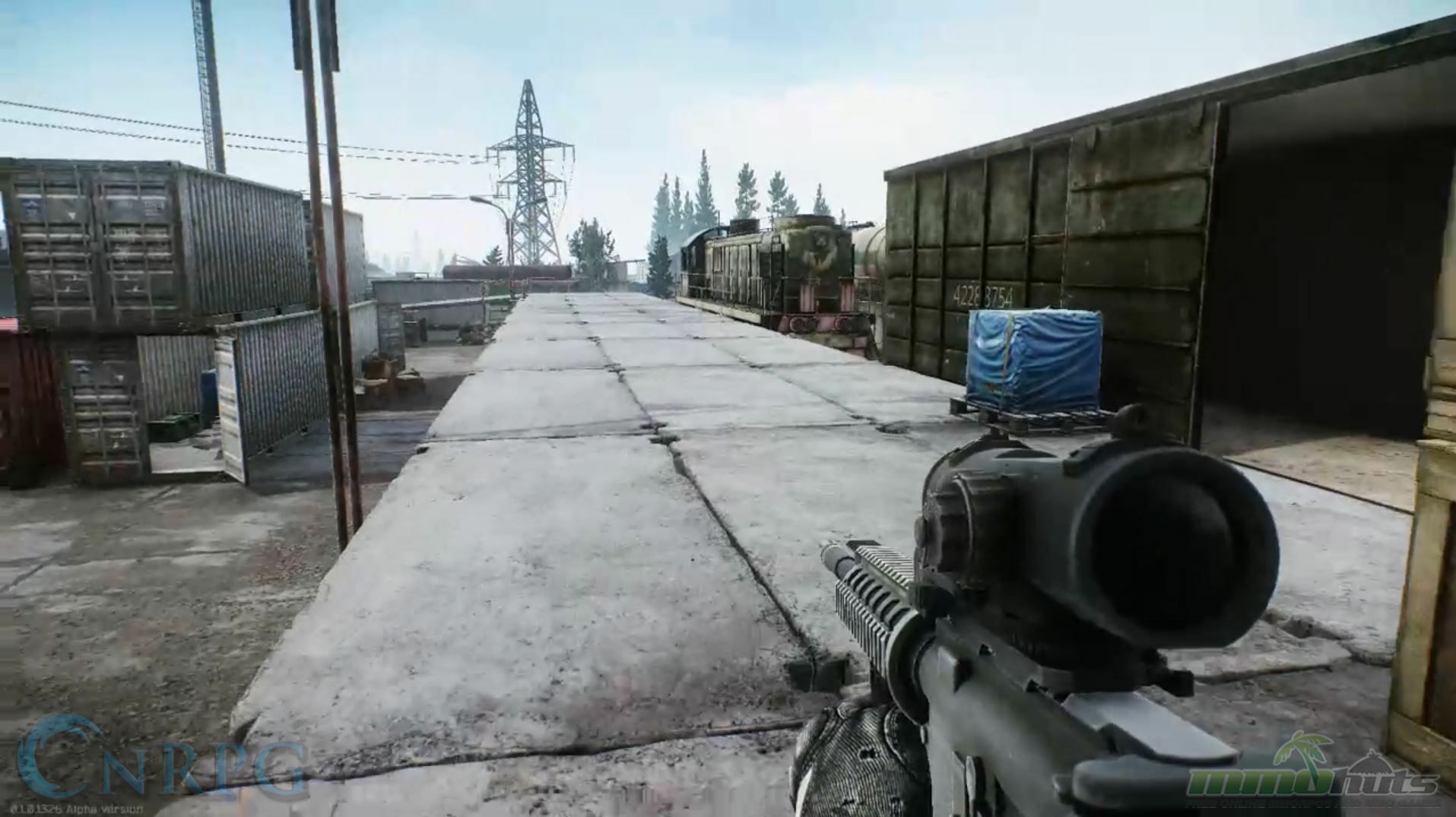 One of the big worries I had/have is concerning money, prices of things, and what happens if you foolishly lose a ton of stuff late in the game’s existence. The majority of your money will come from selling stuff you don’t need to the Traders, or finding Safes or cash storage out in the world. Or from the dead bodies of your foes, but I can’t imagine you’d want to bring too much of your personal money into a Raid with you. There’s no need for it, because you can’t exactly bribe another PC. Unless you can do player vs. player trading with your teammates. It seems to me like it’s going to be very hard to survive if you start to fall behind, unless you get into a clan/guild. There will be clans, and I cannot see you playing this game alone. The nature of this world is survival, and you aren’t Mad Max. You aren’t going out into the waste alone to save the day. Play this with friends. As I said, at present there are Traders (NPCs with certain items for sale) that changes as time passes. The more you spend with them, the better your relationship with them, and as in all things, More Reputation = A happier player. Clans will have a stash too, so you can go farming with a few skilled players, build supplies for your team, and I can imagine players will be able to sell stuff to other players/clans for money. I also like that the Traders can/will be in conflict with each other. They might have friendly [or not so friendly] rivalries, and spending with all of them can probably hurt your standing with them. 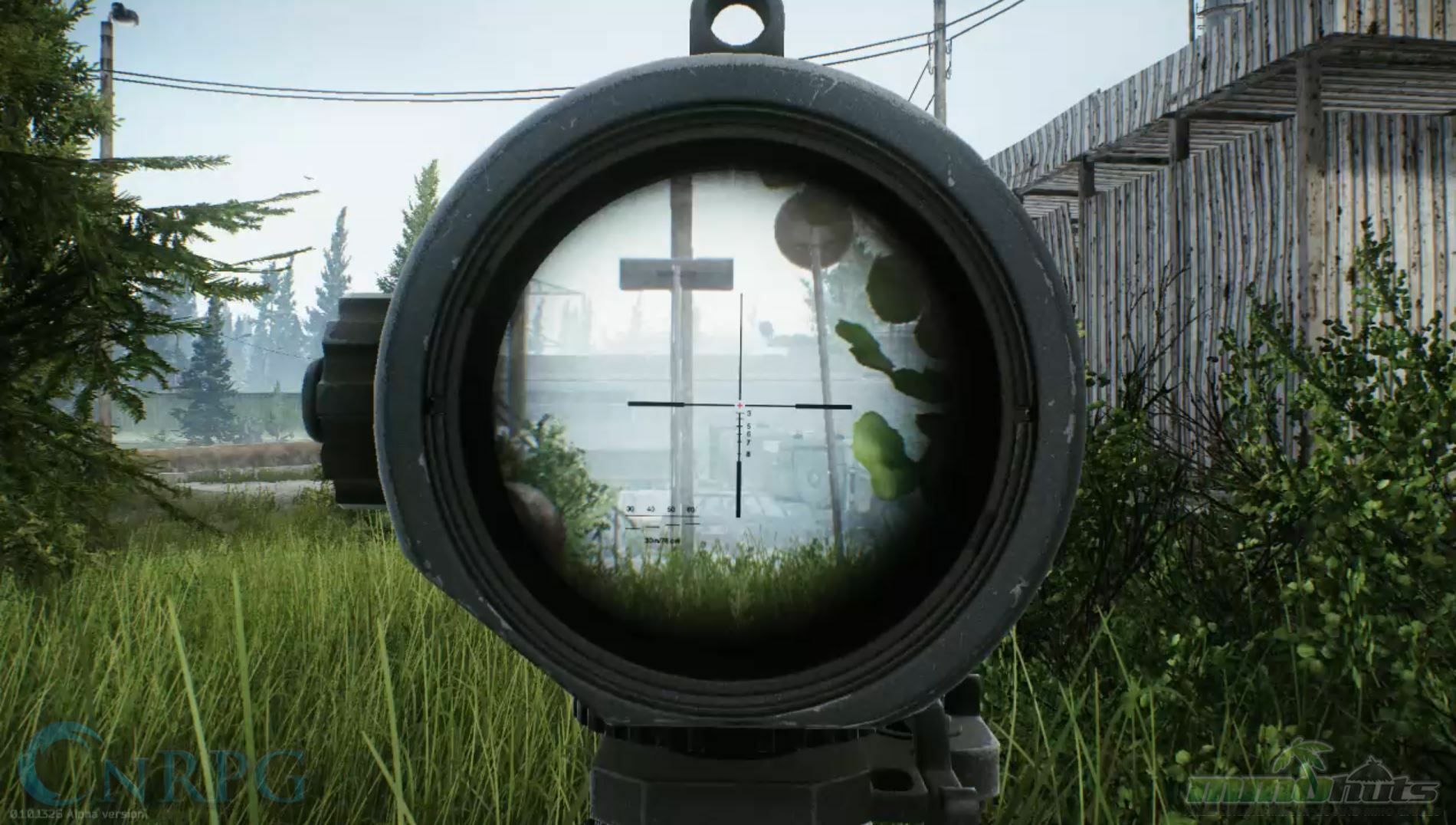 I’m so [so so] bad at Escape from Tarkov. I’m mediocre at best at shooters, sometimes excellent. However, this game is so intense, so serious that I was not prepared. I had no idea that the little things could stop me from breathing. I spent a bit more time in the PVE mode to really explore and try my hand at the world than I did against other players. The PVP matches I did play though? Holy damnit they were insane! I loved it, no matter how bad I was. I appreciate the effort put into this engine, this game.  This is not a game for someone looking to casually have fun and try to “survive.” If that’s your gambit, this is probably not for you. This is a hardcore game for a hardcore audience, something that doesn’t come around just any day. Kudos to their team, because they are trying to make a game that embodies the words “realistic” and “intense.” Boy does it live up to that. 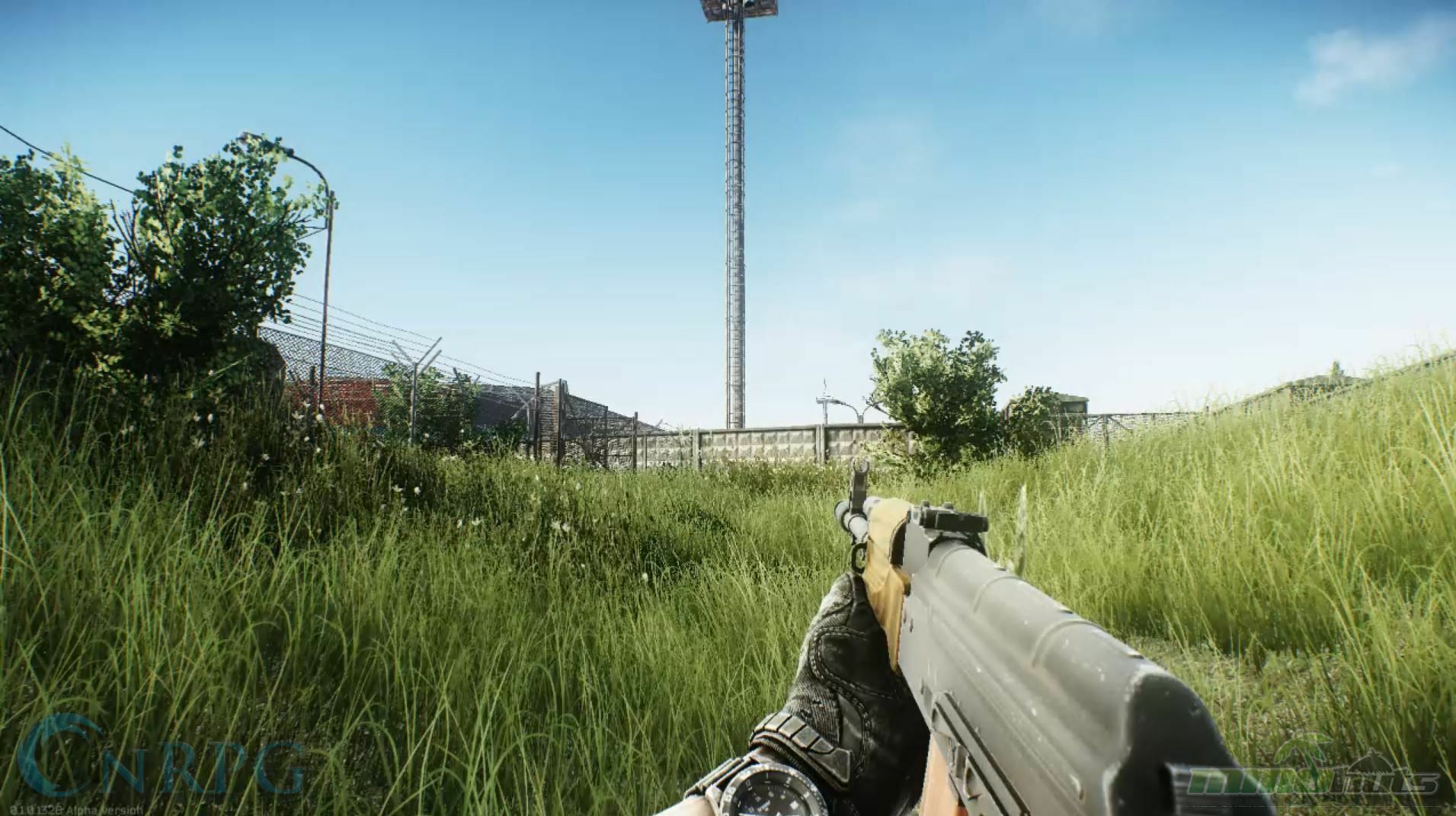 I had some pretty serious latency/lag issues, even in PVE, which was frustrating, but I understand that optimization is still being worked on, this is definitely in Alpha. Not to mention it’s requiring a whopping 16 gigs of ram to run smoothly! There are going to be issues, bugs, and I found a few of them. For example, don’t have a PS4 controller plugged into your PC while playing Escape from Tarkov; it will leave you spinning and aiming at the sky. I had to unplug it, and CTRL-ALT-DELETE, but not close the game… If you close the game you’ll lose everything you brought with you to the fight. 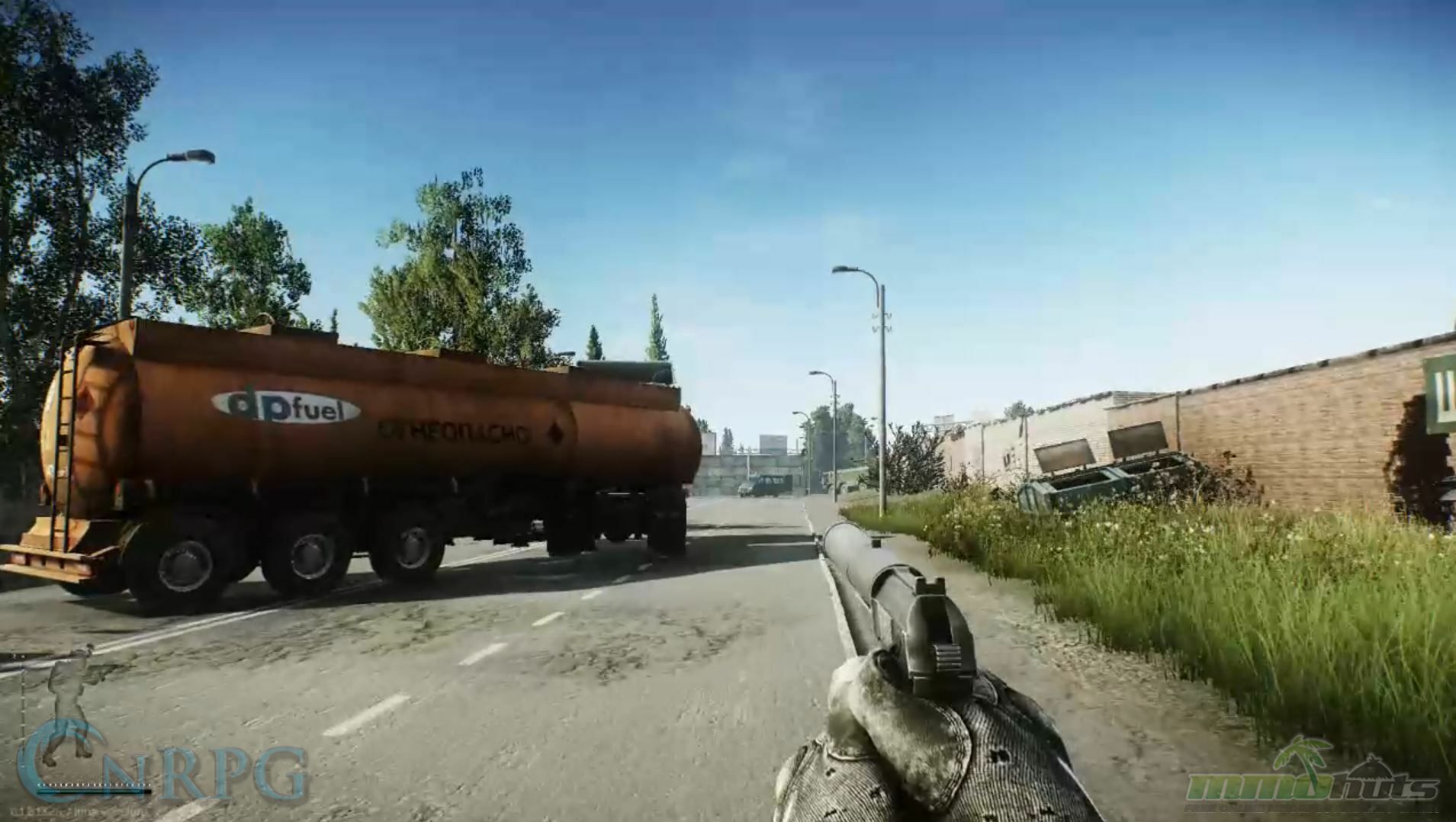 This is not a game for the timid or faint of heart. It’s not gory with gallons of blood spilling, but it’s probably the most realistic game I’ve ever played. I would be creeping through a grassy field, and suddenly a shot rings out and I nearly jumped out of my damn chair! It sounded like it was right behind me. Turns out… it actually was. This game is in Alpha, and still has a long ways to go, tons of maps to come, updates that will no doubt happen. It’s exciting, and no matter how bad I am at it, I enjoyed immensely trying to find my way through an unfamiliar territory with nothing but my wits, guns, and a prayer. Escape from Tarkov is not to be missed if you want to be challenged, and want to play a realistic survival shooter.