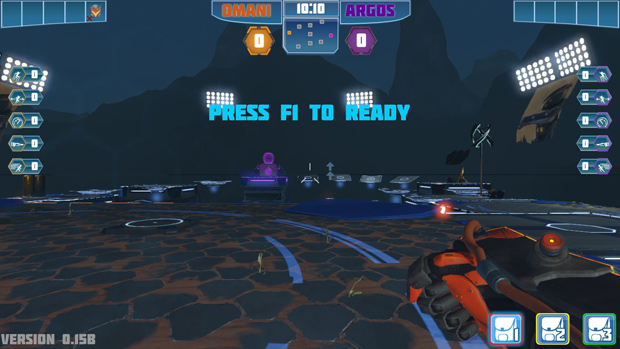 I would like to start by saying that I like the idea for Epigenesis. I was never a big Halo fan, but it really felt like Griffball, suspended over pits of doom. The premise of the game is a futuristic setting on Earth, with two factions competing in this violent, fast-paced game of Quake-inspired combat. There are two main factions in the game, both vying for control. First, we have the gray and violet clad Gladiators of Argos. From what was once Asia, they became one with the kill-or-be-killed jungle; there, only power rules, and the only way to get somewhere in life was to kill the person above you. The law of the jungle rules Argos.

Next we have the African Omani Nomads. They lived between the North African deserts, and before that, the ocean floor, which explains the armor they use to protect them from the pressure and the denizens of the deep. Their armor is adorned with curious shade of oranges and browns that allow them to blend in with the heat of the desert that is their new home. It does not matter which faction you choose, only that you choose one. It is a game filled with fast paced action, violence, and close calls: each map has several platforms that hover over a bottomless void that threatens to engulf anyone who does not to make it from one platform to another. If you are anything like me, you will fall. A lot. 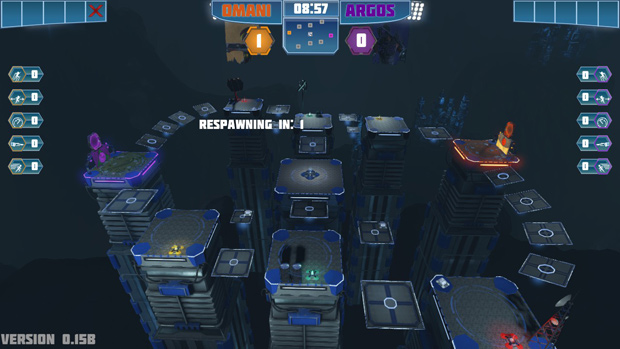 Time to Play The Game

Epigenesis is fairly simple, but still requires a little bit of strategy if you want to win a decisive victory. The matches are ten minutes long, with ten people (five per side). When you join a match, you pick your faction and then press F1 to signify that you are ready. Each side of the map has a portal that you throw the ball (located in the middle of the platforms) using your mouse. Players carry an item called a “Gravity Cannon” that allows them to push or pull a friend or foe. This can be amazing in many ways: you can throw enemies off a rooftop to their death, or a friend up to a goal to make the game-winning point. There is also melee on the F key that can assist you in stealing the ball from other players. You also have a type of pulse blast that you can swap between. 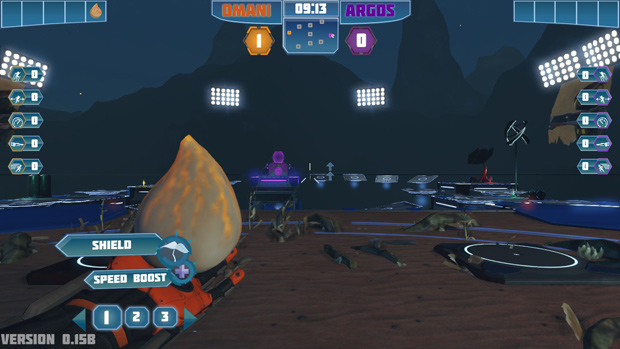 There are other things of note on the map, such as power-ups. These can help you in a variety of ways, which only have one use. They are:

Each time a player scores, their team gets to claim a platform as theirs, via planting a seed on that platform. The game is over when you have the most points, or when you can plant a seed on the enemies’ main platform. My major problem so far has been that I have not had a single opponent in any match except one. The one match I found with players pitted me in a two versus five match, and it was a rout from start to end. From what I have read, the game is primarily played in Europe, so the prime hours are very peculiar to those of us on the other side of the pond. 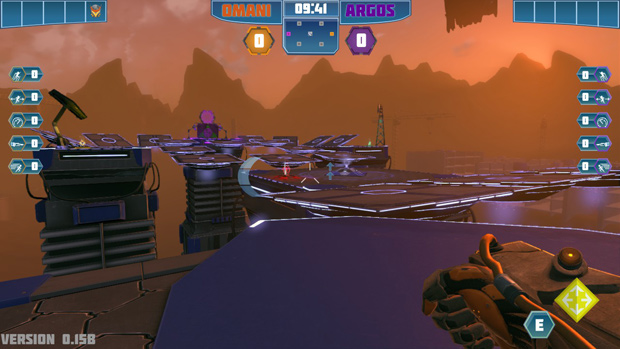 This game has so much potential to be fun and entertaining; regrettably, as it stands right now, it is far from playable for the American audience. I live on the East coast, and my gaming times can vary from mornings to evenings. But I have tried everything from 3am to 9pm and have had virtually zero luck finding a full game in the beta. In conjunction, I do not know anyone else who is involved, so I cannot even one on one. I have however, played most of the maps in single-player multiplayer rooms. That’s an odd phrase to have to use. But I have gotten a feel for most of these interesting, unique maps, and I do have to say, they really do call back to the old days of shooters. But single player, without any foes to compete against, is no fun. They could at least add the option for bots, so that players who have no one to play with can still improve while waiting for full launch. Even Call of Duty has bots, and it hasn’t changed since its inception.

However, Epigenesis is beautiful. The vivid colors and unique, interesting maps really paint a wonderful picture, and the lore for this game could be fantastic if they put some out there. There could be so much more to this! While it is good that it feels like an early 90s title, there are negatives attached to that as well. There was very little in the way of story or anything to draw me in, other than “Futuristic Basketball.” I think this title has the potential to be fantastic. But as it stands, from what little I have had a chance to play, I am a little let down. 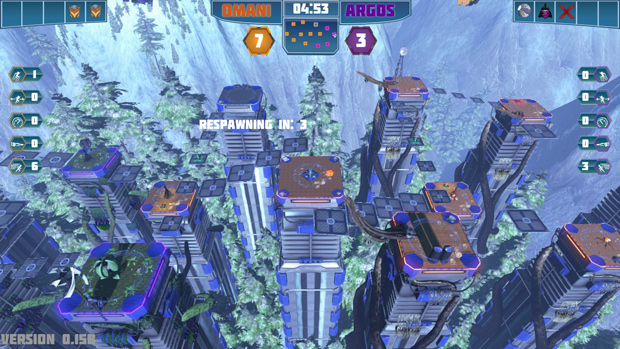 I feel that this game still has a long road to launch. I am not positive that it is ready to be released to an audience at all. While normally, I’m very bad at sports games and shooters, I could not say very much about this. I desperately wanted to enjoy it, as a call back to my youth, but I was really expecting something more. These graphics are not bad, not at all. The character portraits are detailed, and very nice. The maps are beautiful and varied in where the platforms are placed. However, this is about all the good I can say here. While these things are pleasant to look at, they do not in any way enhance the game or make it more enjoyable.

The controls are a little stiff, but still responsive. It was sort of hard to get used to playing without my controller, but luckily the tutorial does teach how to play the game. It teaches you the power-up items, the double jump, and similar useful things to know. Beyond the gameplay there is a glimmer of customization options to increase replayability. There are apparently loadouts you can put together in the options, but there is nothing in the tutorial that explains or gives you any idea on what these could possibly do. There are no bot matches, and only one real game mode that I saw.

The in-game sounds were pretty cool, I have to say. The title page music was very drum-and-bass, techno style music, which I guess can fit the sci-fi/future setting, but it was very overpowering. I felt like I was listening to very repetitive dubstep. The in-game music was a little different, and a bit easier on the ears. The sound affects for weapons and power-ups were pretty cool sounding, though, and certainly felt like they belonged.

We’ll be revisiting this game closer to full launch to see if it can get ironed out and provide a better experience once an actual playerbase is inside and testing it out.