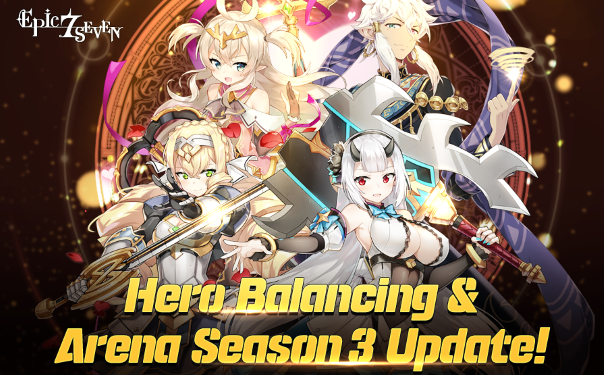 Epic Seven has released its first update from its “Roadmap for Change,” a series of upcoming changes revealed during its Birthday Conference. This update applies hero balancing changes, adjustments to Check-in Rewards, and improvements to flat-statistic Equipment. Per press release:

First, the Hero balancing changes targeted Heroes who were difficult to utilize in PvP. Following these changes, there will be many more potential team compositions in PvP modes, such as Arena and Guild War. Additionally, the 3★ Moonlight Heroes Gunther and Otillie received respective adjustments to their survivability and ability to contain enemies, greatly improving their previously lacking performances.

Changes to Check-In Rewards were some of the most popular changes announced during the Epic Birthday Conference. Players are now able to receive high-value rewards just by logging into the game every day, including a 4-5★ Hero Summon Ticket, Artifact Summon Ticket, Galaxy Bookmarks, and Mystic Medals.

Lastly, flat Attack, Defense, and Health statistics on Equipment received major boosts, bringing them up to between 150-250% of their previous values. This was a change that was suggested during the Player Conference held on July 31st. Smilegate plans to bring gradual changes to Epic Seven through constant communication with players.

Meanwhile, the special Side Story “Reingar’s Chaotic Full Moon Festival” is taking place from September 5th to 26th. In this Side Story, players will not only be able to enjoy the story that unfolds around Yuna and the Academy City Reingar but will also be able to acquire a variety of in-game items, such as Catalysts, Skystone, a new 4★ Artifact, and Yuna’s Exclusive Equipment. On top of that, an increased drop rate event for Yufine, a Dragon Warrior from Wintenberg, is being held from September 5th to 11th.

Smilegate Megaport’s Department Manager Sanghoon Lee commented, “As we release the first update after the Epic Birthday Conference, I really hope that our players enjoy the changes we are bringing to the game. As mentioned during the conference, we will bring gradual changes to Epic Seven to make it more enjoyable for our players. We ask for your continued support.”