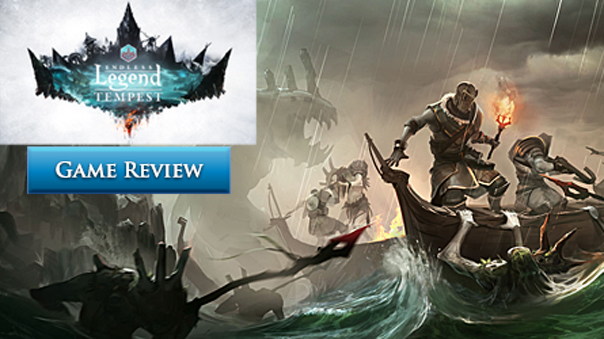 Tempest is the latest DLC for the highly acclaimed 4x fantasy edition of Endless, Endless Legend. Where most 4X Strategy games focus on a galactic scale and take place in space, Endless Legend focuses on a single fantasy world steeped in the rich lore of the Endless. I’ve been following Endless Legend closely since its release, and have played each of its expansions, covering them all for OnRPG and MMOHuts. Tempest is no different, and this may just be a contender against The Guardians for my favorite DLC to arrive thus far. With this new DLC, you will be introduced to a new faction, get to experience new sides of the Endless, and explore the world in ways that you previously couldn’t. That’s right! Tempest is a sea-faring themed DLC and it greatly expands all things water within Endless Legend. So let’s hop right in and see what Endless Legend: Tempest brings to the plate! 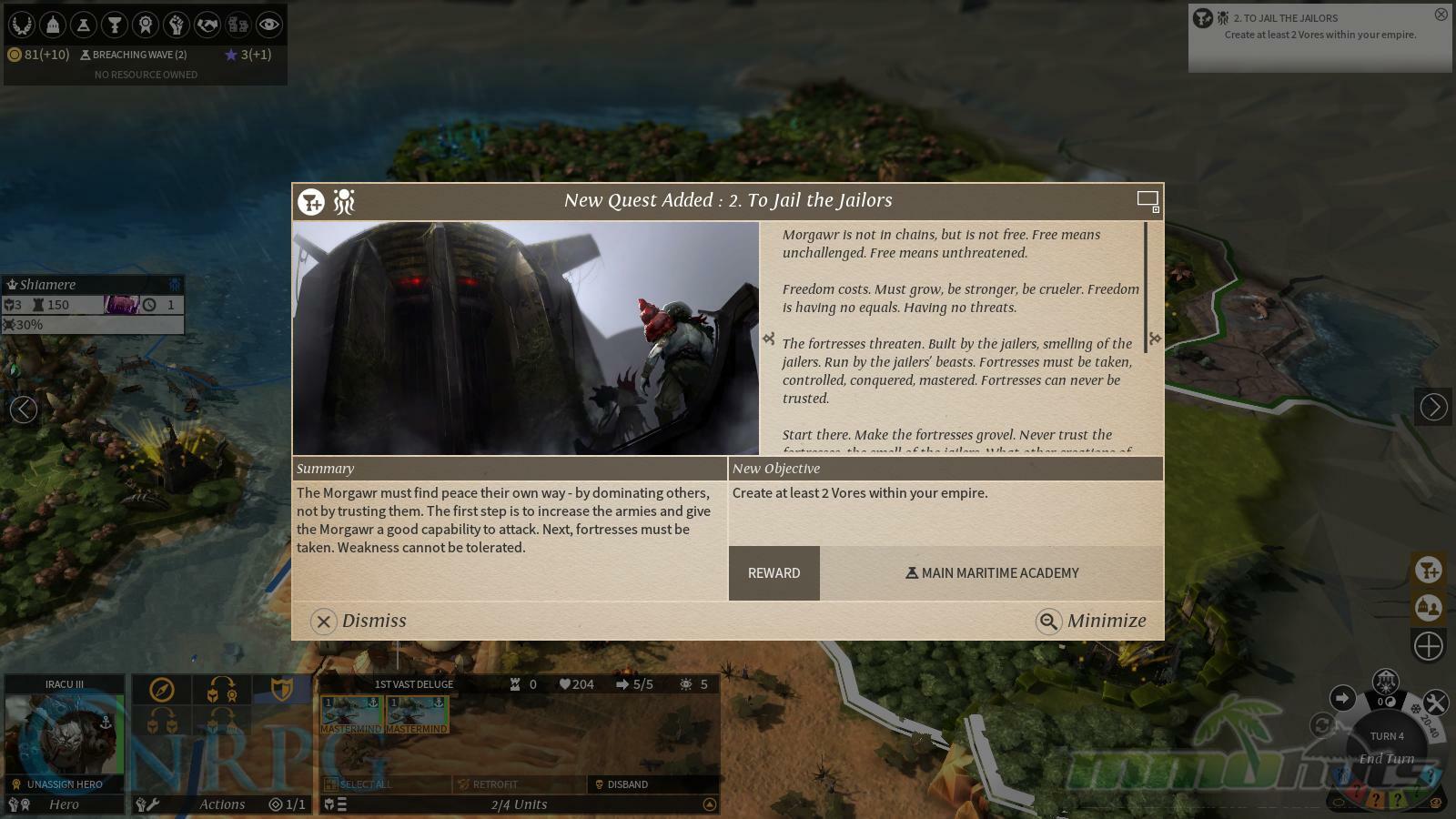 As would be expected, a DLC brings new content. As I said in the introduction, the primary theme of Tempest is all things water. To that end, a new water-heavy faction has been introduced to the game. This new faction, the Morgawr, is definitely aimed at ruling the seas of Auriga, with many of its units being weak on land but powerhouses at sea. They get a slew of faction abilities that give them bonuses to things like travel over water tiles.

Of course, new quests and events have been added to the game. Early on, you’ll run into a quest that introduces you to the new Sea Fortresses and ‘arcane structures.’ The Steam page for the DLC says there are over fifty new quests added. It’s great that Tempest has come out right around the same time as Endless Space 2 is coming out, because we’ll be getting a double dose of Endless lore. Well, relatively speaking. 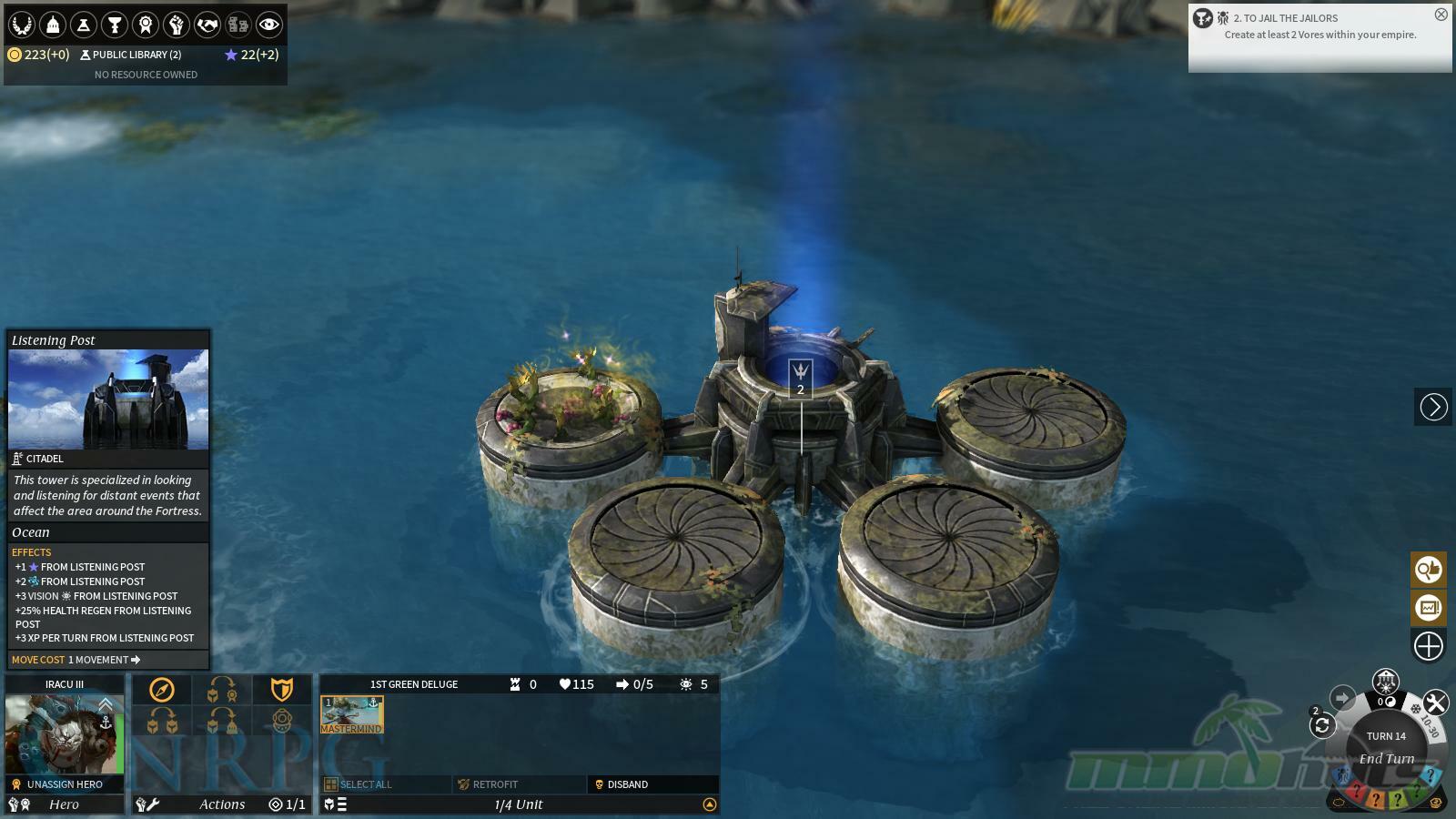 Tons of new sea mechanics to get used to.

Riches can be found in the sea, but first you must get past those that guard it. There are options when dealing with these guardians, which is nice. I love 4X games, especially those set in the Endless, because you can often accomplish your goals with no violence. Not always, though. You can obtain luxury resources and other rewards from these relics, but the guardians can be fierce and may attack you if you happen across their patrols. This is a neat feature that makes the sea-portion of Auriga gain a new sense of exploration, but with a twist that makes things more exciting. 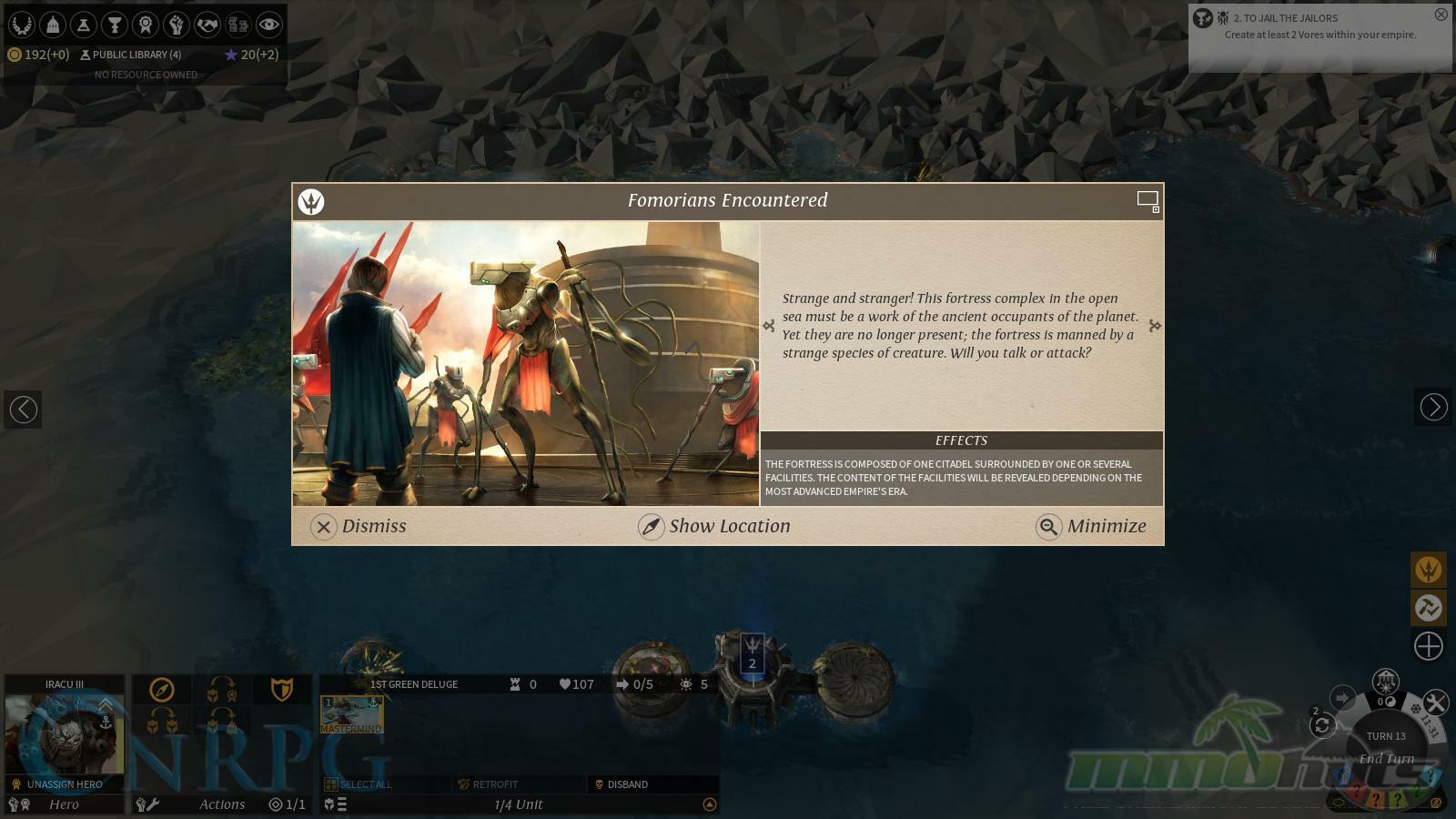 Plenty to explore and discover in the sea, including a new minor faction.

A new minor faction has been added to the game, the Fomorians. These guys protect Sea Fortresses that can be found while exploring the waters of Auriga. This weren’t as exciting as some of the other sea-based content, at least for me. They do offer benefits, of course. Not least of which is that they can be found in strategic locations that may give you a hand in taking on the other players.

What game with sea-based content would be complete without a Kraken, or equivalent giant sea monster? From the Tempest the so-called ‘Hungering Maw’ has emerged. It’s about what the name suggests: A giant monster with an equally giant mouth that hungers… often for your ships. Needless to say, this is a thing to avoid. 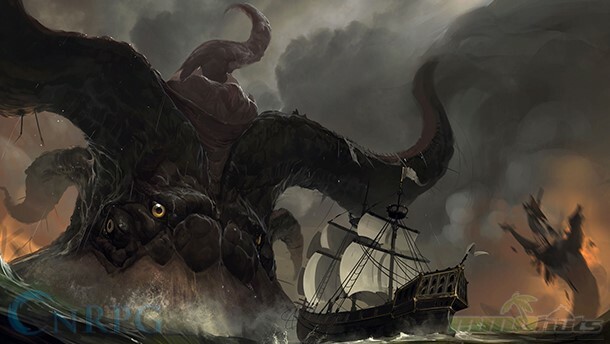 Don't get cocky with your new seafaring units and think you can take this guy.

The Morgawr are the result of a symbiotic relationship between the sea life of Auriga and something else. That something unifies these sea creatures under one consciousness; many bodies with one mind. While they may not be the top-dog on the land, the Morgawr is a faction built for the sea, so you’ll focus most of your strategy around making use of that. For example, the units get a bonus to sea movement that gives them a leg up against the competition. It’s the ultimate way to experience the new sea-based content. 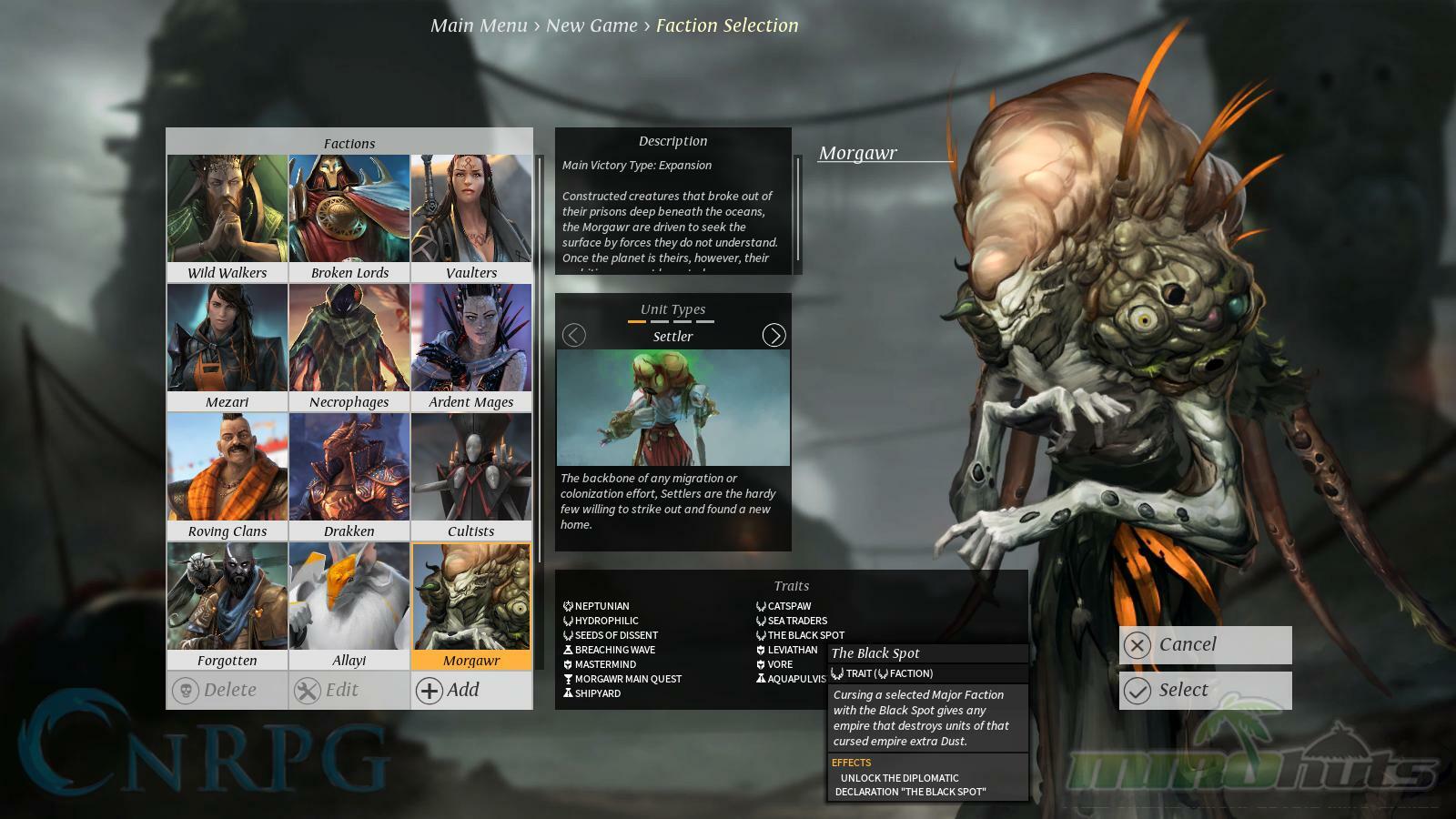 The Morgawr and their black spot ability makes for one of the best races added yet.

Of course, you can’t do everything by sea. You’ll still find yourself spending time on land. But the power over water can’t be ignored. The Sea Trader gives you a hefty bonus to Ocean Control in sea trade. Another example is Neptuanian, which takes away the movement cost of embarking and disembarking from ships. Probably my favorite thing, though, is The Black Spot. This is an ability that lets the Morgawr select an empire, declaring upon them the Black Spot, which gives whoever attacks them dust bonuses. And these bonuses aren’t restricted just to you; any empire can attack those with the Black Spot and get rewards, which is a nice way to help entice others to take on your enemies. It’s a bit like the Pope excommunicating someone in Crusader Kings II.

With the new faction and units, there’s obviously going to be new artwork put into the game. Generally, the Morgawr have an awesome design and look neat. I especially enjoy the models and animation for sea travel. But I have to say that, in my opinion, the show goes to a relatively small addition. The hand-drawn storm and cloud markers on the map when you’re zoomed out just enough look fantastic. It’s the one art addition to the game that came in Tempest that I just had to stop and appreciate. The storm clouds and lightning strike animations when you zoom in closer to storms are also neat. It is touches like this that bring the game map to life, and that life is part of the reason I enjoy Endless Legend so much. 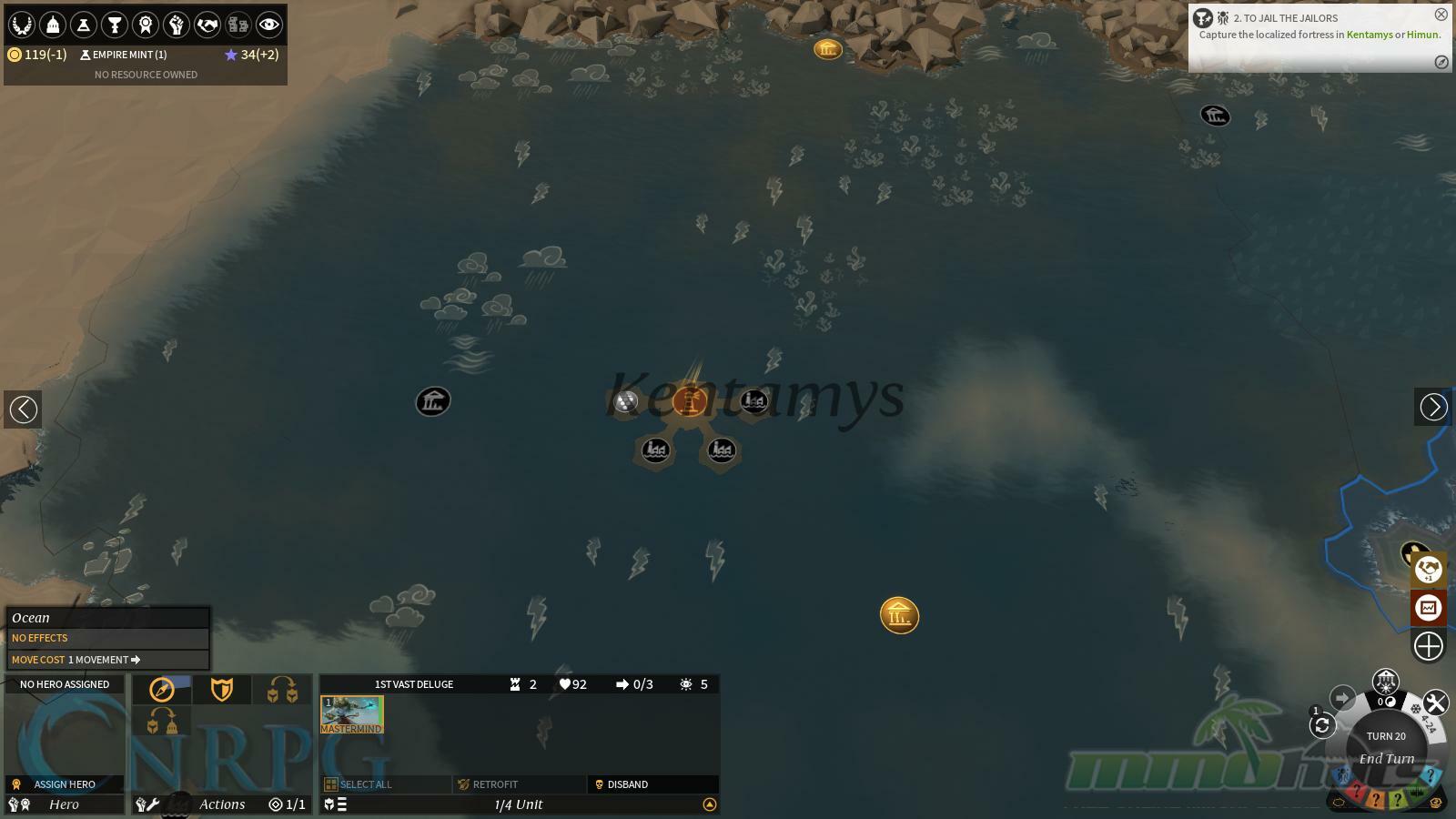 The sea is vast. Plan accordingly.

Four new tracks have been added to the game. These tracks have been created by FlybyNo, which is also the creator of the original sound track for the game. Below is one of the new tracks, Leave the Depths. It fits the Morgawr fairly well, I think. It starts off slow and pondering, but builds up into an intensity. The Tempest OST is more than pleasing. Personally, I feel that it fits the expansion perfectly.

Personally, after experiencing Tempest, I’m still partial to The Guardians. I just enjoy giant monsters. But, that doesn’t mean Tempest fell short. It’s exactly what I want from an Endless Legends expansion: It adds a ton of gameplay content, new quests and events to help expand the lore of the Endless, and redefines the gameplay not radically, but enough that when you do a play through with the expansion it feels like a fresh game. The new faction was fun to play with and the new artwork was superb. While you certainly don’t have to get your hands on the Tempest DLC for Endless Legend to enjoy the game, you would be missing out if you passed it up.