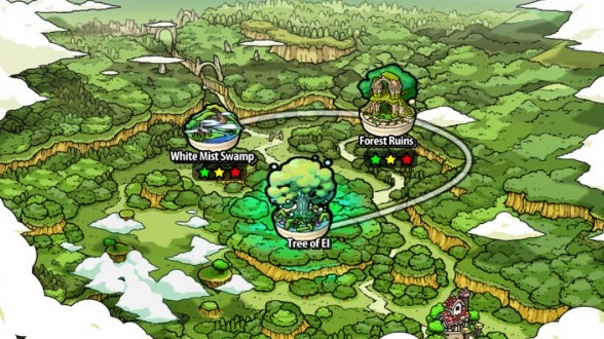 Elsword is a side-scrolling, fast-paced, fighting MMORPG developed by KOG Studios. When the game was originally created, it was to be a reboot of fellow side-scroller Grand Chase, another creation of KOG Studios. Elsword (the character), Aisha, and Rena were near identical to characters from Grand Chase, but were scrapped when different producers took on Elsword. Because of this reboot mentality, there are many similarities to Grand Chase; however, there are a few key differences, such as the job class system, that it diverges quite a bit from its predecessor.

Nexon published the game initially, releasing it in South Korea on December 27, 2007 and it has been free-to-play since launch. Many different publishers have taken the mantle to bring Elsword to many different countries, such as NHN Japan, Gamania, and Kill3rCombo, which allowed releases in Taiwan (10/23/2009), Hong Kong (11/9/2009), Japan (3/17/2010), and North America (3/23/2011). Elsword also has had 6 manwas written that take place within the story of the game itself called ElType, 4 are focused on the “El Search Party” while 2 are centered on the character Chung. 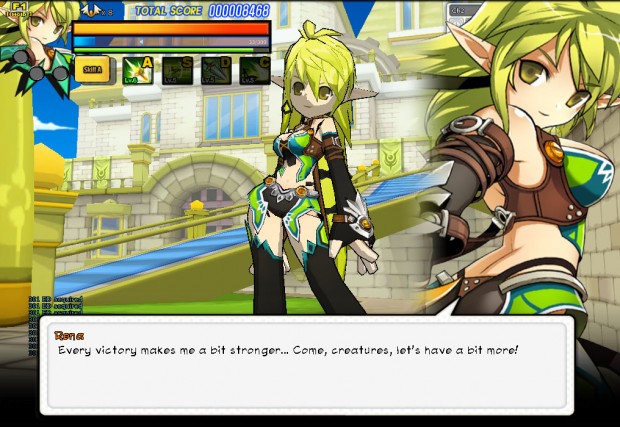 When I began playing Elsword, I had not realized that side-scrolling MMORPGs existed. It reminded me of the NES days, but more specifically that of a Zelda game where it hybridized RPGs with side-scrolling. The nostalgia took a back seat once I started to delve deeper into the mechanics of managing my MP, aiming my shots to maximum effectiveness, and utilizing various attack combos to slowly climb my combo meter higher and higher.

Spells and special skills use both an MP and a cool down system. When in cooling, there is a countdown that lets you know exactly how much longer you need to wait until it can be used again, which is useful for those long cool down abilities. Combos use a collection of “Z” and “X” along with direction keys. The best part for new players is once you have started using a combo key, it instantly expands your entire possible tree of combos and highlights as you continue along your combo. You gain more combos as you gain new classes, so there is still some learning when you achieve those changes.

The possible playable characters are limited to 6 possible choices, each gender locked. However, each character is not a cookie cutter mold of each other, as at level 15 each playable character has the choice of taking up one of 3 advanced classes which advances further at level 35 with a story arc for each class advancement. You have Elsword, the great sword wielding adventurer; Aisha, the former greatest mage of Elrios; Rena, an elven ranger who protects her allies with a bow; Raven, an atoning swordsman with a Nasod claw for a left arm; Eve, a Nasod who wants to bring the coexistence of humans and Nasods; and finally Chung, the nobleman who wields a giant cannon as if it were nothing. 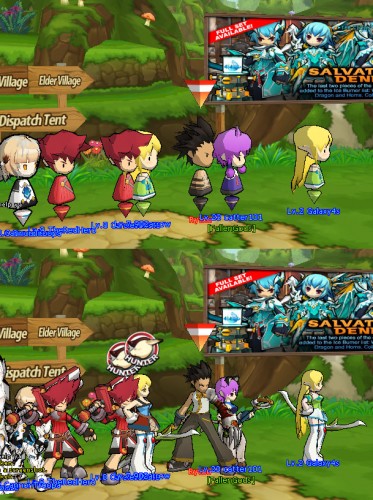 There’s a large lack of customization in the game, outside of playing dress up with the characters. The characters are gender locked; their hairstyles and colors are locked as well. However, the money store comes with costume pieces that you can wear over whatever equipment you’re actually wearing to maintain a set look, though without it you’ll constantly be mix and matching colors and gear types based on what you pick up along the way. One nice feature though that other titles in the F2P spectrum often lack is the ability to mix cash shop pieces with actual gear to create a hybrid look rather than just being naked wherever any of your pieces lack a cash shop covering.

There is one unique thing I did notice. You can actually press F6 and change the view of yourself and all other players into a Chibi art mode when not in a dungeon. This mode disregards all equipment, but it does make for a cute and funny looking approach to heavy populated areas such as towns. It’s a nice way to improve performance while also sidestepping the usual graphics of everyday MMOs or even other side scrolling RPGs where everyone is very humanoid looking.

Once More unto the Breach, My Friends

Ah yes, the quests. It’s quite easy to find the quests, with people on the map with large yellow exclamation points floating over their heads. There are many times where you have to replay levels in order to finish quests, though on different difficulties. Each level has 3 difficulties, Normal, Hard, and Intense. In order to help figure out where a quest is, when you click on the map of the different areas there’s a large golden Q on top of the level. Since some quests must be accomplished on harder difficulties, they add the golden Q to indicate that you’ve chosen an appropriate map and difficulty level to accomplish your activated quest. It might seem like a small benefit but you’ll be glad when it saves you from having to grind out an easy map only to realize you wasted your time.

Teaming is actually quite easy in Elsword. Even if you’re going to solo, you have to create your own team. If you create a team, you can leave the designed member count on 4 and then people can click “Join Team” to quickly jump in. The creation of your team is automatically broadcasted so you won’t have to put much effort into finding party members if you want to. After your new teammates join and click ready, you’re all set to start the countdown for the actual quest. The group stays together after the boss is defeated and can either do another quest or leave the team. From my experience, it most common for a group would disband instantly after the quest was complete. 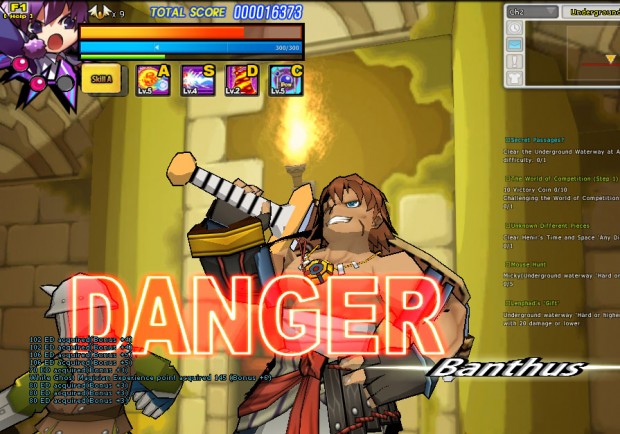 The old side scrolling nostalgia was really what I enjoyed the most of Elsword. The lack of customization was a large drawback for me, though the expanding classes from the base characters did help some. The customizable fashion idea is something that I enjoy on the surface, but it really should allow you to overlay regular equipment you like aesthetically while maintaining the better gear’s stats. Their systems for teaming and questing made joining up with others in the community and avoiding running unnecessary maps a snap. Overall the game offers just enough nostalgia, skill-based combat, dress-up, and Manwa story-telling to keep its target audience enthusiastic for each update.