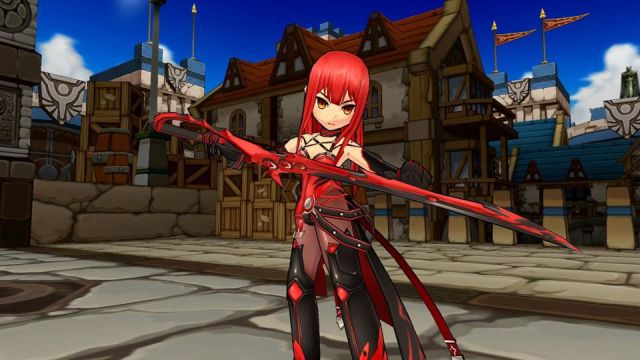 KOG Games, a leading developer and publisher of popular free-to-play action MMORPGs, today announces the launch of the latest episode in the “Darkness is Coming” character series with the new, sultry 2nd Job for Elesis, Crimson Avenger.

Facing impossible odds, Elesis hardly fought off the demons that ambushed her in Feita. However, she lost every Knight in her command. In order to survive the onslaught herself, she sought out the energy from the nearby Dark El, but at a cost that she was not prepared to handle. Her mind drifted into darkness and with the blood of her fallen Knights coursing within… her heart succumbed to the darkness within and her mind began to twist. From the blood-soaked nightfall, Elesis strikes as the Crimson Avenger. If her life dangles by a fine thread, it’s not important. All that matters now is vengeance.

When players advance Elesis from the new Dark Knight Job Path to Crimson Avenger, additional skills are incorporated into the new, exclusive Blood Hit attack system. The damage dealt by certain skills gets a boost from the power in her blood. When Crimson Avenger’s HP reaches at 20% or less, the activation of the Blood Hit skill then uses up an amount of HP equivalent to 20% of an applicable skill’s damage, and effectively deals 40% more damage. Visit www.elswordonline.com to learn more. The volatile Crimson Avenger’s Blood Hit skill will turn the tide of battle in a heartbeat.

At level 35, Elsword players have the opportunity to take Elesis from Dark Knight to the sultry and vampiric Crimson Avenger. Wield shadow and blood as the ultimate weapons and control the battlefield with reckless abandon. Elesis has reached her apex form. Lady vengeance will rend the demonic army limb from limb, and cast a warning into the night… with their blood. Darkness is Coming!

Here are some more awesome events!

Lunar New Year:
Celebrate the Lunar New Year with Elsword! Get New Year firecrackers and more from the in-game Lunar New Year Scroll. Also, there will be Shiny Qipao costume suits and deals on Ice Burners and Fossil Readers in the Item Mall for a limited time.