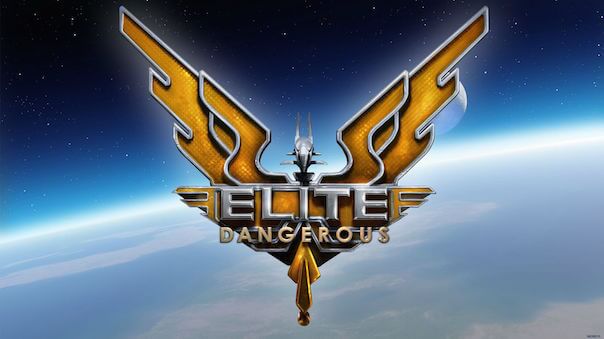 Elite: Dangerous is a beautiful open-ended galactic adventure that delivers on most all of its Kickstarter goals and design promises. The fourth in a series of games that spans many gaming generations, Elite: Dangerous carves out a piece of history for itself by being the first 1:1 scale explorable representation of the Milky Way galaxy with over 400 billion star systems. This one is quite the looker with up to 16k texture scaling and technically impressive simulations of trade and real-time constellation positions. However, despite the technical and graphical achievements there are some major mechanical and narrative issues within Elite: Dangerous that threaten its longevity as an open-ended MMO.

In Elite: Dangerous you take on a variety of space faring roles starting out in a small outpost roughly 100 lightyears (LY) from Sol – our solar system – and 100 credits (CR). 100CR is not very much, and 100LY is quite a distance in the beginning. All players start out in a free and fully insured “charity” Sidewinder ship, affectionately referred to as the ‘Sidey.’ With little cargo room and limited jump range, the Sidey is just enough to take on some courier missions, tiny trading endeavors, and small-fry bounties. Because of the Sidewinder’s limitations, new players won’t be able to go very far until they upgrade some components or buy their own Eagle, the starter fighter, or Hauler, the starter trading ship. Purchasing a new ship is the first real step towards Elite: Dangerous’ ultimate goal: To become ‘Elite’ ranked in Combat, Trade, and Exploration.

The main roles of Combat, Trade, and Exploration define the sub-roles that players can actively take part in, these include the following: bounty hunter, mercenary, pirate, smuggler, trader, miner, and explorer. Fulfilling these sub-roles solely depends on the outfitting of a ship. For example, being a miner requires a mining laser, a decent size cargo hold, and a mining refinery in an internal compartment. Of course, different ships have different sized compartments, hardpoint configurations, and power resources, so some ships are more specialized for a couple of sub-roles over others. 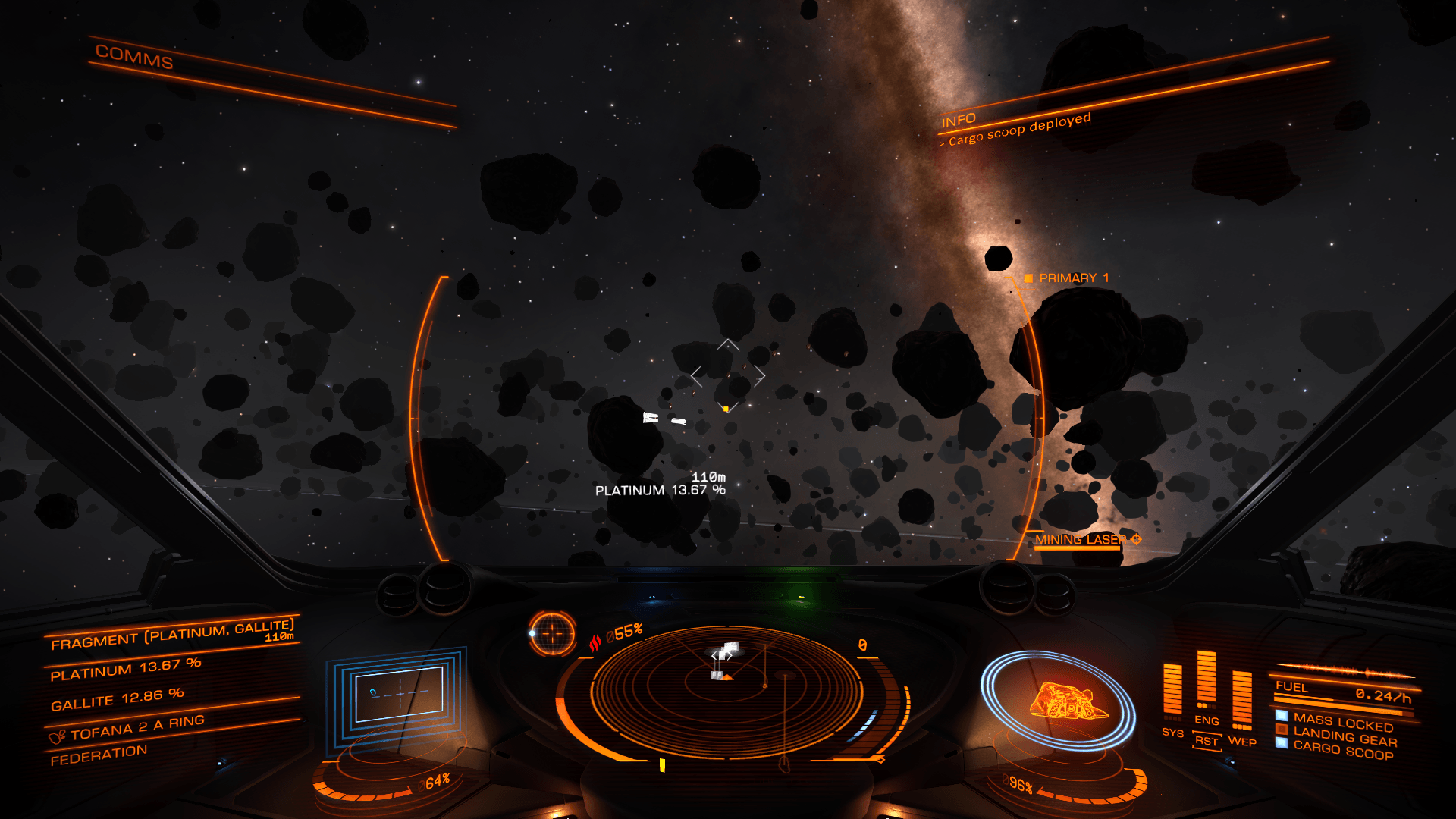 Players are never locked into a specific sub-role at any one time, but switching roles requires going to a neutral or friendly station or outpost with outfitting options and plonking down some credits for the correct components for the job. Mixing and combining roles occurs quite frequently; crossing the mining, trading, and exploring roles in an hour long mining run is not too uncommon in semi-remote system. Role switching is well done in its ease and variety, and it’s refreshing to switch between roles on a whim to try another angle at making credits.

The ‘Elite’ title is the highest pedigree a pilot can achieve in the Elite series, and each of the three main roles has this title at the end of their title ladder. Each of the main role title trees starts out with shameful titles like ‘Harmless,’ ‘Penniless,’ and ‘Aimless,’ but they progress to more noteworthy ones like ‘Competent’ and ‘Dealer’ on the way up to ‘Elite.’ These title ladders give scope to the main objective of the game, but they’re not actually as important as the acquisition of credits and new ships. Titles play somewhat into the universe building that players take part in, for instance, you’re less likely to mess with someone of a higher combat rank than yourself, but titles don’t actually mean anything in the grand scheme of things. Stations and outposts will never turn a player away because they’re not of a high enough rank in a main role, so titles are mostly around for showing who has played the most so far, as well as all important bragging rights. For now, titles as they currently exist are alright, but giving them more meaning down the line would be appreciated.

Meaningful progression comes in the forms of ships and credits; the larger and better outfitted the ship you fly, the more capable and badass you are in relation to everyone else. Like cars in real life, certain ships show off a player’s economic status more than being useful, for example, the almost impossibly expensive Anaconda that costs a fortune to repair and outfit.

Acquiring new ships is very straightforward and only gated by how quickly one can make credits. Purchasing a new ship requires going to a friendly station with a shipyard, and trading in or storing your old ship before buying the new outright. There is a bit of an issue with ship swapping though: There is no way to transport a ship other than by piloting it yourself, so if you have several ships then you’re stuck playing musical chairs with them being haphazardly parked across the galaxy. 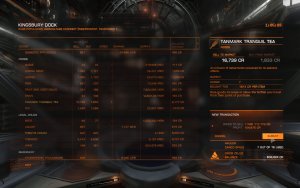 That said, credits are the most important aspect of progression; if you want to get to ‘Elite’ rank in any of the main roles then you’ll need to find a way that really brings home the bacon, but right now there is only one way to do this: Trading rare goods. Over the course of 80 hours of play, I split my time between mining (~100K CR/h), bounty hunting (~75K CR/h), faction/courier missions (~50K CR/h), exploration (~25K CR/h), and rare goods trading (~750K CR/h). Trading rare goods is by far and away the most unbalanced and dominant strategy for bringing in credits; doing anything else is simply a waste of time. Rare goods trading is so safe and easy I would recommend that every player abuse it until they have enough credits to bootstrap themselves into a combat, long-distance, or super-high capacity ship so they may actually pursue ‘Elite’ status in any of the main roles. If decent ships were not so insanely costly or if bounties and faction/courier missions paid out more then this would not be an issue, but for now, sub-roles are very much economically imbalanced.

Factions, Influence, and The Story
The universe is always in political flux… sort of, but not really.

Elite: Dangerous launched with an ongoing story, mostly surrounding the current affairs of The Empire. At the time of writing, the Emperor is extremely ill, there’s political turmoil abound, and the borders of Empire space are being rewritten by war with The Federation. In-game story arcs like this influence the state of the populated star systems; each star system has a measure of influence and political stance with each of the three major powers: The Federation, the Empire, and The Alliance. Additionally, each star system has influence measures for each of the sub-factions of people that exist in the system; these range from mining companies to civil disobedience groups. The political state and sub-factions of each system determine the types of missions that are available from local stations and outposts, trade goods going both in and out of the system, and what types of goods are considered contraband. As a result, Elite: Dangerous has a changing web of politics, conflicts, and trade.

It was originally promised that, “Players will decide the fate of the Empire as they take sides in a conflict which threatens to push the entire galaxy to war. A new Emperor will rise, and you will decide who takes the throne. What comes next will be determined by player actions,” however, this doesn’t seem to be the case.

Players may choose to engage in local system missions, bounties, and trade at any time, and as a result faction and sub-faction influences shift and player reputation with major factions change, but faction and sub-faction shifting part seems to only be a theory right now. Over the course of a couple weeks, dozens of players on the Elite: Dangerous forums and subreddit have instigated three civil wars in the Lugh star system in order to change it from Federation controlled to Independent, but none of the wars “stuck” and the player driven effort fizzled out and failed. As a result, nothing in-game has changed, but this has prompted Frontier Developments to tweak their faction-influence model. So far, the influence and reputation mechanics are either very shallow, or are not quite working properly. In either case, these mechanics are not living up to the dynamicity that was originally promised. 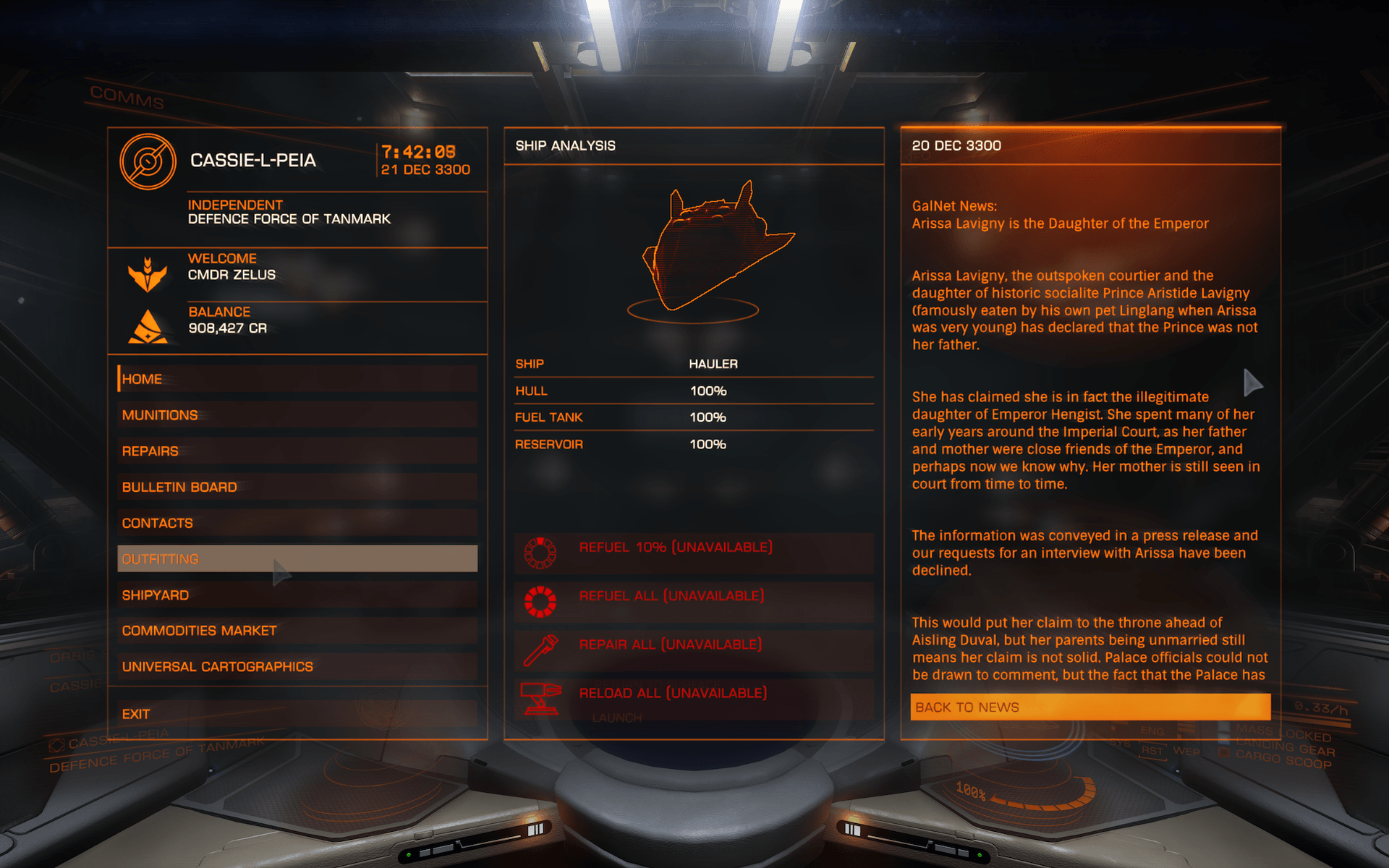 “It’s easy to read up on the ongoing story when trading and refueling.”