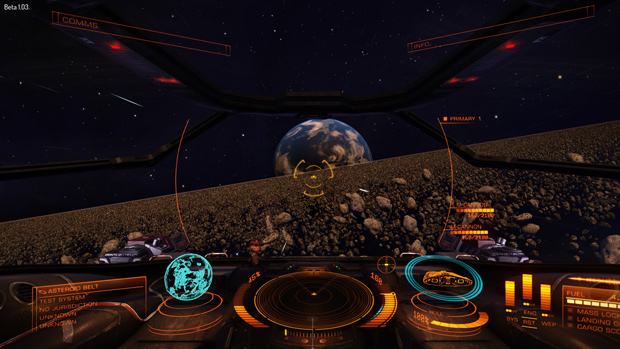 Recently I was assigned by my editor to have a look at a game called Elite: Dangerous, so I could update the community on the game’s progress since the most recent look at the game by one of my colleagues. I went into this experience knowing absolutely nothing about the game – I never even knew it existed before I was directed to it and invited to explore the beta. For better or worse, I went into Elite: Dangerous with fresh eyes and no bias for or against the game. What follows is an accounting of my experiences with it, in its current beta state. 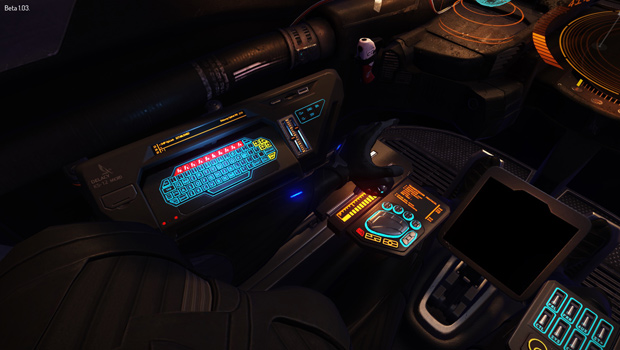 Anyone who knows me or my reviews can tell you that I’m an immersion freak. In fact, most of my favorite games are practically simulations. Given that Elite: Dangerous is built to be as immersive as possible, it stands to reason that this game might quickly become one of my favorites. But it’s more complicated than that. With my big monitor and surround-sound setup, do I feel like I’m in the cockpit of an interstellar fighter? I do. I can free look around, see all of the controls, even see my own boobs, or the pull of the trigger finger when I fire my weapons. The entire experience is just utterly rich and engrossing, and for fans of space flight simulators, I imagine the game is abit of a promised land.

After all, the intentions of the development team behind Elite: Dangerous are to make something with the comparable depth and community espirit d’corps as EVE Online. That’s a tall order, but the possibilities are fascinating. EVE is a success, but often what keeps it from being a runaway success is the alienating, cold gameplay that is quite impersonal and difficult to get into, for most people. Even in its current state, Elite: Dangerous has a far more engaging approach, with gameplay that’s atmospheric, tactical, and action-packed. It’s a recipe for success. 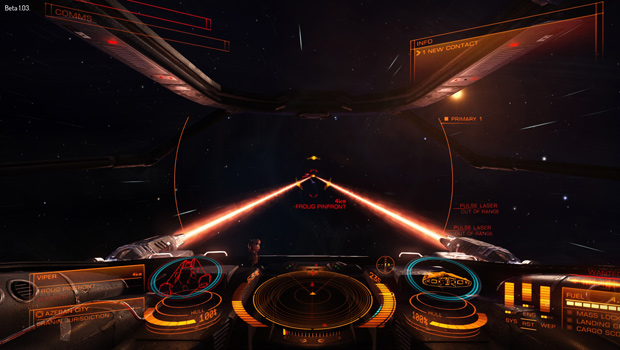 There’s just one problem! In its current state, Elite: Dangerous is extremely difficult to play. You might be thinking that’s rather the point, it’s a simulation, and not just any, but one that drops you in front of the controls of a complex spacecraft – in space. That’s just it, unfortunately. There’s a huge difference between flying on a planet, and flying in space. In space, there isn’t the constant, reassuring point of reference called the ground. When you’re upside-down in a jet, you know you’re upside-down and have a much easier time re-orienting yourself. In space, there’s blackness everywhere, and it’s terribly easy to not only get turned around, mixed-up, and lost, you’re also likely to get a bad case of motion-sickness. I know I did. It was not fun. 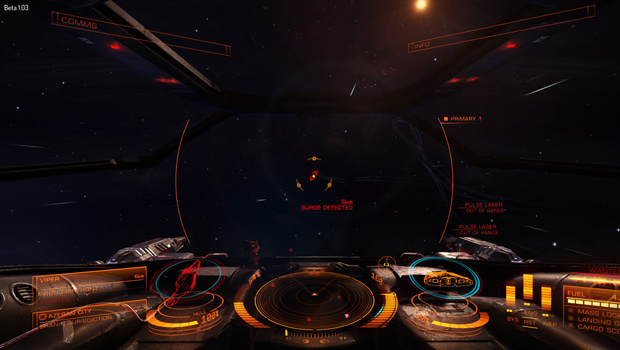 Nausea aside, this sort of thing usually gets better with acclimation and practice. The game has a radar system that’s meant to help you orient yourself and nearby objects better, but I found that it had limited range, was often difficult to read, and left me confused more often than on target. I hope they put more work into the radar HUD, because it’s absolutely critical to use properly when engaged in dogfights, or even just trying to ram floating containers in the tutorial. There are ways the game can be made easier to play without sacrificing the spirit of the immersive atmosphere, and beefing up the short-range radar and adding some more positional-marking HUD elements would be huge for that. 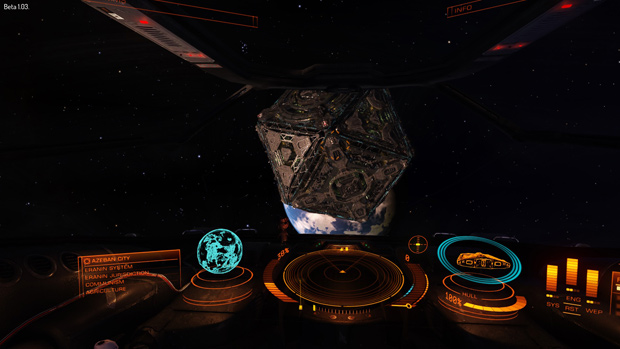 This is just the basic gameplay. It has promise. Now, the macro-game is meant to be vast. Allegedly, Elite: Dangerous wants to add in economic systems, elaborate space stations, large corporations and guilds, a complex law and security system, and plenty more. I couldn’t really find much of this in my exploration of online play. What I did find was an endlessly spinning cube that was apparently a space station, and some NPC police cruising around it. My efforts to ‘dock’ in this space station were initially met with death, since I mistook one of its many nooks and crannies for a docking port. It was harrowing and hilarious when I got caught in said crannie like a shoe in a washing machine, and was quickly pounded to death by the rotating walls of the space station. 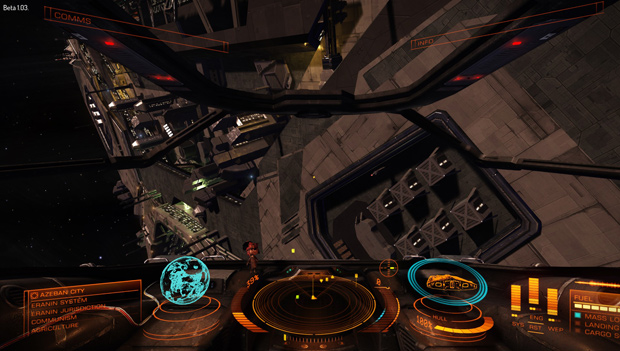 When I respawned, I was inside the station in a new ship – that’s one way to get indoors, I suppose. I found that the dock was in fact on the topmost part of the station, rotating in a much more gentle motion, and far easier to slip into. It was a good note for the future. What followed after that was me spotting a red-marked ship scrapping with the local police. I thought I’d have some fun and get involved. What followed was a wild goose chase through the system, with me helping to gun down the outlaw, only to have the police inexplicably turn on me once he was taken care of. Had I accidentlly shot a police craft? Were the laws for interfering with police business in this sector punishable by death? We may never know. What I do know is that I died trying to flee back into the space station. It was fun, and a little nauseating. 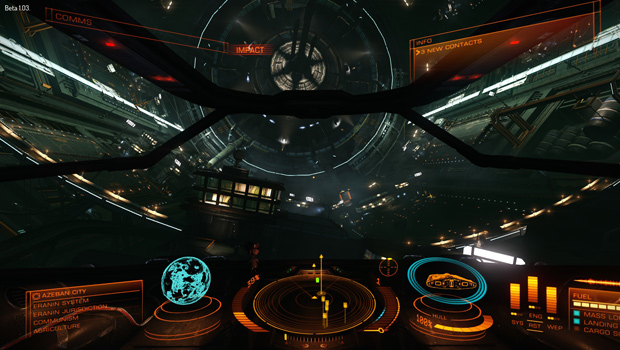 I looked far and wide, and couldn’t really find anything else to the game beyond this small area. Perhaps right now the beta is sparsely populated. I would have loved to pilot different kinds of ships, perhaps something small and nimble, but I couldn’t for the life of me figure out how that was to be done. I thought about visiting the forums to see if this was all the game had to offer, but that would have killed the point of a glancing review. So here lies my experience, untainted and pure. The takeaway is that Elite: Dangerous has an incredible base to build on. What I played felt more like an alpha than a beta, but this could be because there were many features hiding beneath the arcane murk of the game’s starting experience. Very little is explained. The single-player tutorials are quite rich, though. If only there was something to guide you gently into the online portion.