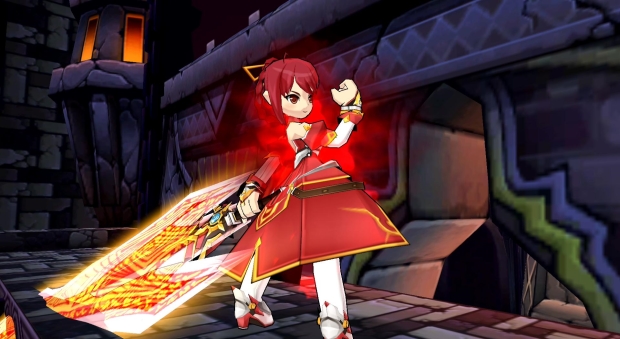 Following the advice of Hoffman, the village elder, Elesis leaves her post as Captain of the Velder Knights. Free from her duties as Captain, Elesis can now focus all of her efforts on finding her brother Elsword, and purging Elrios of the demon infestation.

As the fiery Pyro Knight, players will experience both in-close and medium range melee attacks combined with a wicked ability to cast fire at range. Elesis will wield her epic Claymore and cast fiery death in a flagrant display of hybrid melee action. With the ability to burst into the fray with a number of AOE effects, The Pyro Knight Job offers players more than just a typical melee or fighter-type game experience.

If a more traditional, upfront and personal, searing melee brawl is the preferred style; players can choose option number two and play as the vicious Saber Knight. With a keenly focused attack agenda, the Saber Knight deals big damage in a big way! Though still the master of the fiery family blade art, the Saber Knight Job focuses on in-close, direct damage offset with both greater defense and HP. As Saber Knight, Elesis takes the fight to the enemy.

The choice is yours. Strike fear into your enemies with intense sword attacks and wildfire as the fearsome Pyro Knight, or eradicate your foes with the hard-hitting, precise and overwhelming aggression of the Saber Knight! Either way, swordplay expertise combined with calculated fire attacks becomes Elesis’ strengths. The mighty Red Haired Knight prepares herself to defend an entire kingdom.