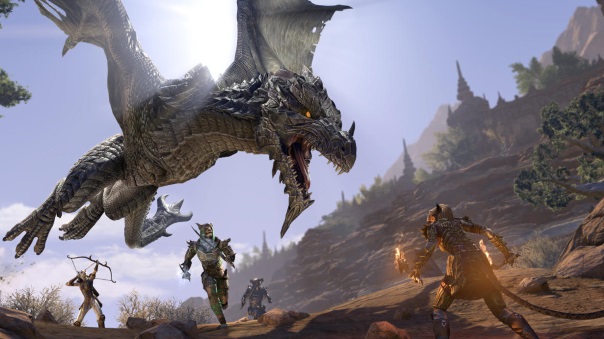 Note: The Elsweyr expansion is still in the PTR/Testing Phase, and things may change between now and then.

Elder Scrolls Online’s latest Chapter, Elsweyr is well on the way, and over the weekend, I spent a little time in the PTR for Elsweyr. This gave me the opportunity to take a peek at the upcoming story, the new Necromancer class, and in general, just explore this beautiful new addition to Tamriel. These expansions are called chapters instead to appeal perhaps, to the Elder Scrolls fanbase, and to make them more personal/story-related, instead of the impersonal “expansion” title. It’s a marketing thing, but there’s nothing wrong with that. One of the other things I love about the ESO chapters, is they always appeal to new fans as well as the returning fanbase. As someone who does not play ESO half as often as I’d like, I can always step into the new expansion/chapter content without having to have completed the main story, hundreds of other quests, and also the best gear on top of that. I can just make a new level 1, jump into the new story, and take it as fast or slow as I please.

The ability to just wander and explore as I please, while also enjoying dedicated storylines is one of the hallmarks of Elder Scrolls Online, and I’m very interested to see how this new, year-long story is going to play out. This is the first year-long story/season coming to Elder Scrolls Online – Year of the Dragon. All of the story/chapter content coming this year will build around a new story, where the Dragons have woken and have decided that humanity just isn’t all that necessary. I won’t spoil anything about the chapter’s story, because it picks up almost as soon as you’re out of the tutorial (but once you’ve completed it, you don’t have to do it again gratefully). This is not a story that’s going to make you wait too long. Morrowind did kind of start slow, but Elsweyr will right that wrong for sure.

Visually, I love Elsweyr. It reminds me of what The Barrens in World of Warcraft would look like if it were on a prettier game engine. It feels like the African Savanna, and it’s gorgeous. The wildlife reflects that too, with armadillo/burrowing mammals, ugly birds that lurk and hover, and of course, the mysterious Khajiit race. This is their homeland after all, and it’s got three things to watch out for: Poachers, Necromancers, and Dragons. Dragon Hunts are a new world encounter that you should definitely not try alone. They are not easy to hunt, but the rewards are certainly worth it. There are also, of course, new Delves (solo content, usually attached to a quest), and a new 12-player Trial, Sunspire. Sunspire will have players doing battle with a group of Dragons in the temple of Alkosh, and will absolutely be a challenge.

But what I really enjoy, more than the area, more than the aesthetic of the world, is the Necromancer class. When I first saw the Sorcerer, that’s what I mistook it for. I still played the Sorcerer, but secretly, I wanted to master the dark arts. Okay, maybe not secretly. Necromancer is (mostly) a beginner-friendly class. I say mostly because many of the skills it can use cannot be used in polite society, or around non-adventurers. Many of the dark arts are illegal, because for some reason, manipulating the flesh and bone of the dead is “forbidden”, or “repulsive”, or “horrific”. I don’t get it, myself. However, Elder Scrolls’ Necromancer class, like the Warden, can Heal, Tank, or deal DPS. This means no matter how you want to play, the Necromancer has you covered. In my livestream, I said something incorrect though. I stated the healing tree required life to use spells, but that was just the one skill, their cleansing ability. So, apologies for that.

The Necromancer is a whole heap of fun, but I am admittedly disappointed that their summons doesn’t last all that long. They typically show up, do their thing, then crumble back into a corpse. The Skeleton Mage I believe lasts the longest, outside of the Colossal Undead ultimate. You can shoot fiery skulls, swing a massive scythe of undead energy, encase yourself in bone armor, infect the ground around you with the power of the grave and more. There are three Skill Trees with this class, like all the other classes. Necromancer features Grave Lord, Bone Tyrant, and Living Death. Now, I love the Necromancer, but they are incredibly mana hungry from level 1 on, so I can see the potential in Stamina builds. Personally, I stuck with the mana powers, instead of morphing them the other way. I also really enjoyed building them with medium/heavy armor, and one-handed weapon+shield, because if I run out of mana in the early going, I want to still be able to protect myself.

Grave Lord – Imbue the undead with fire, ice and lightning magic to destroy anything in your path. The Grave Lord raises the undead to fulfill tasks, usually involved in destroying your foes. Once your opponent’s armies are weakening and falling, raise those too to aid you in combat. It’s also important to note that the Grave Lord tree can generate corpses, that can be used to empower other abilities. If you hover over the tooltips, the ability will tell you if a corpse adds a new effect ( more damage, et cetera).

Bone Tyrant – This is the tankier tree for the Necromancer. You can extend your life and erect barriers of bone around your body to aid you. The bones of the departed are to protect you, after all. Just because someone has died, doesn’t mean they no longer have a use. Bone Tyrants can also drain life from their foes, and place a Bone Totem at their feet, which boost protections for nearby allies, and also roots enemies for 4 seconds.

Living Death – If you prefer to aid others, you can still utilize the dark arts. You can draw from the power of life and death to replenish your own health, as well as your allies. You can also resurrect your allies to bring them back to the fight. The grave is no bar to your call. Living Death masters can also heal in a group with Live Amid Death, and even conjure a Ghost to help them heal, with Spirit Mender.

All told, Elsweyr is going to be very exciting, and I’m looking forward to what this chapter brings to the game. There are new houses to buy, the new Daedric Artifacts System for Alliance War, the Guild Finder tool (which I definitely need for this new character), and so much more. The world of Tamriel is growing ever more vast, and though Elsweyr isn’t a titanic new continent to explore, it is a fun new nation, and Zenimax does a great deal with the land on offer. It’s beautiful, scenic, and those Khajiit are without a doubt snappy dressers. But there’s something amiss in the Elsweyr Confederacy – undead are running rampant, and there are whispers of horrific, mighty dragons looking to extinguish life as we know it. Get ready for a brand new experience in ESO!