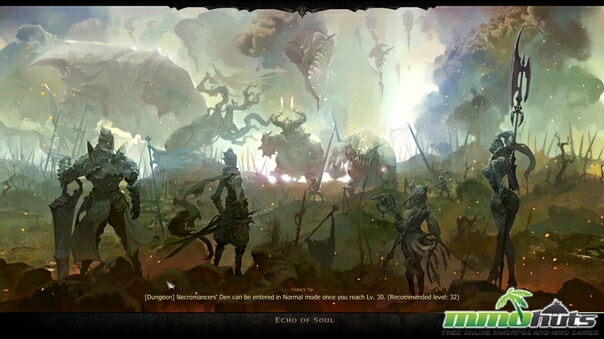 At Pax East earlier this year, I attended a private party where I was made privy to some gameplay of “Echo of Soul,” a new title coming from Aeria Games. Echo of Soul is a fantasy-styled MMO from Korean developer Nvius, which will also be free-to-play. It will sport some pretty unique features that I ultimately feel will help it stand out in the current market, glutted with MMORPGs. I don’t style it a “WoW Killer,” or anything of the sort, but that is mostly due to me thinking that’s a ridiculous term. The classes are tied to a gender already, so there’s a little lost in customization, but there are several options to design the character in a way that you’d like, as well as equipment for style, which I always think is pretty cool. 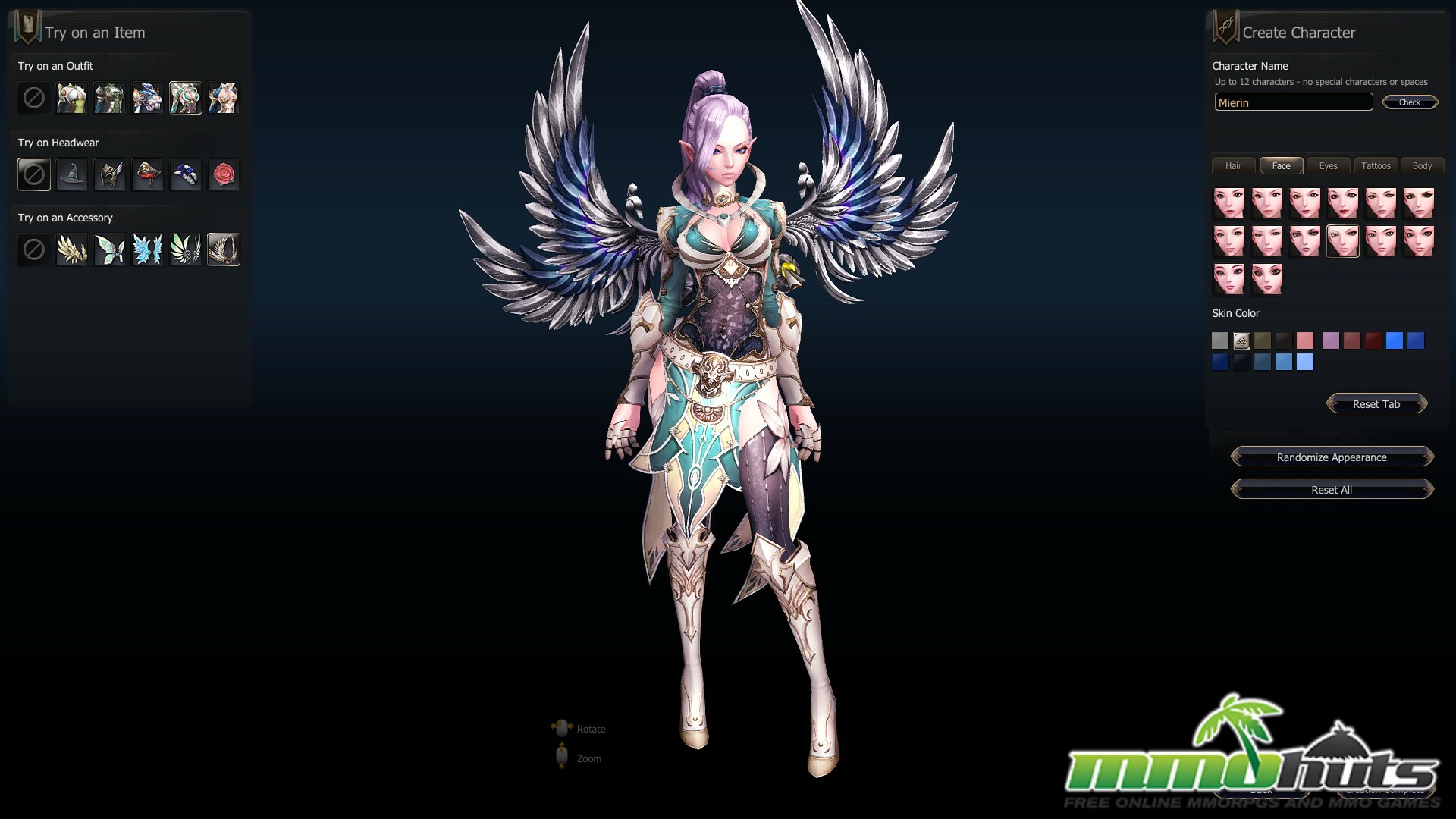 Despite gender locked classes, customization is quite nice.

I have already had an opportunity to play Echo of Soul, and even had a shot at doing a higher-level dungeon with a couple of other press members, including my boss; and one of the things that really stands out, that makes Echo of Soul a title all its own is that there are no healers. That’s right: No dedicated healing class at all. Healing is the purview of the entire group, and if you are not paying attention and working together, your team is going to die when the tank is obliterated. Despite this change to take experienced players out of their element, most of the mechanics are very newbie friendly, and the in-game help includes voice overs to explain exactly what you need to do in the event you don’t care enough to do the reading. Echo of Soul is quite special, and is going to smash its way into the public eye!

All The Worlds’ A Stage

The game takes place in a standard fantasy world, with evil armies, destruction around every corner, and you as the hero, trying to set things right again. There does not seem to be much in the way of technology, lending me to the thought it is high-fantasy, which is in no way a bad thing. While the world is beautiful, I have to say, the massive amount of loading times can be very annoying. Anytime you move to another part of an area, indicated by a swirling portal, you load into the next area instead of it being a more free-loading style of game (RE: World of Warcraft). While this is not really a bad thing, and is just time consuming if nothing else, there are smaller areas in between quest hubs, tiny maps with a few enemies and the occasional quest. These I found to be incredibly annoying as time passed, but at least you get a mount very early! The winged-llama mount that you acquire in an early quest was fantastic, and adorable. Not a huge speed boost, but it nonetheless makes up for that tedium.

Yes, this is a quest-based game; you will be doing a lot of quests on over 80 maps; it might seem like it gets boring fast, if you don’t care to quest, but fear not! There is another option. A pretty useful way to level is the “Infinite Hunting Grounds,” where you can enter small maps with a non-stop ability to quest and kill enemies, and gain rewards. I’ve passed through a few on my way to level, but I wanted to explore more of the game instead. There are of course dungeons, and solo dungeons which are much more challenging if you are ill-prepared. Take me for example, I joined one for a quest at level 12, not having taken a Path. Paths are alternate ways to build your character, and each class has one, with its own strengths, weaknesses and difficulty. Needless to say I was close to dead weight compared to my more prepared companions. 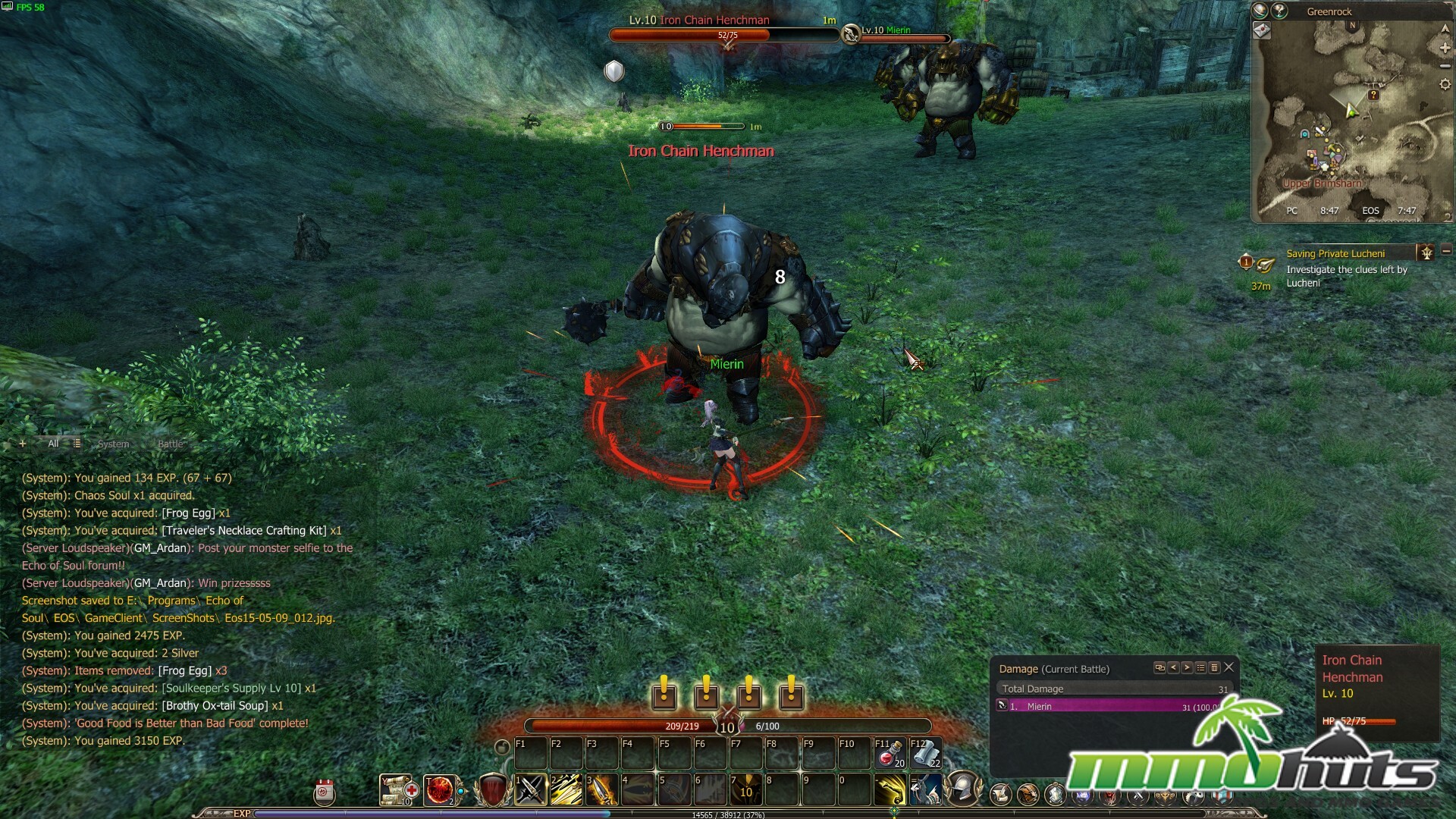 Learn to dodge and utilize heal skills before you tackle dungeons.

As a side note on being dead weight, one cannot simply stand still and pew pew in Echo of Soul. Each class has its own dodge ability, and to avoid taking tons of damage from enemy powers, one must be aware of unique mob animations and pop your dodge when necessary, keeping an eye on your surroundings to avoid being boxed in in the process. It’s not as gimmicky as it might be in other action-oriented MMOs, where you can dodge almost at will; no, it has a cooldown, but a fair one. It might be a little more rough on characters who are always in melee’, but practice will make perfect.

Souls play a huge part of this game, it’s not just a catchy title! As you progress and kill things, you will notice you are acquiring “Souls.” These souls can be purified at a Soul Sanctum, which is located in pretty much every civilized portion of the game. They are divvied up amongst the four types of Souls in your “Soul Satchel.” Hope, Courage, Innocence, and Peace; these virtues are the types of Souls you can purify as you play. You can only purify them in town at a Sanctum, unless you have friends! There’s also “Co-op Purification” which will be taught with a quest; you don’t have to be in the same party or even on the friends lists of each other. Simply right-click them and it will prompt them to see if they wish to help you. 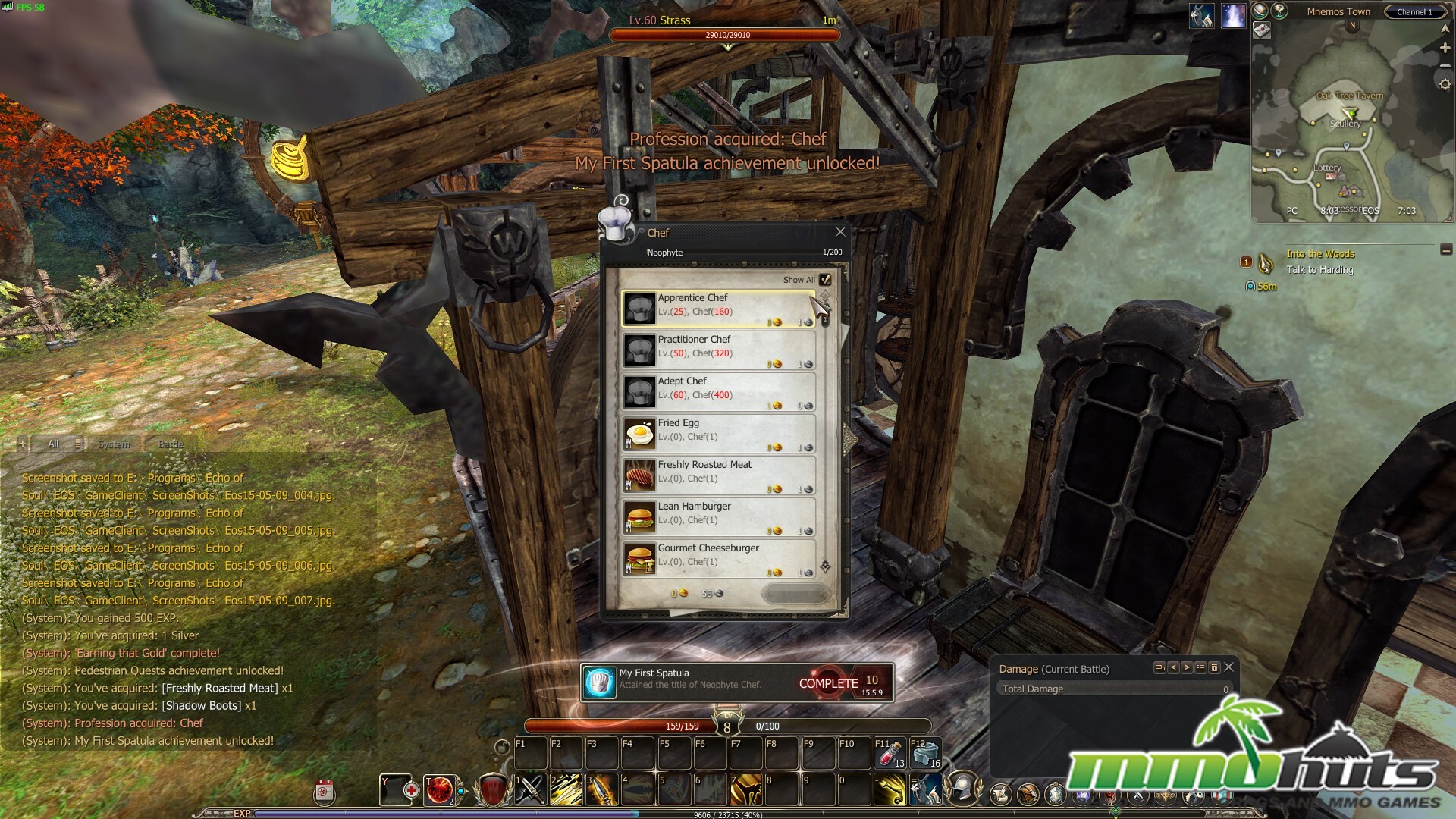 There's plenty of side crafts to discover, like being a chef!

Purifying via cooperation is cheaper (you gain more purified souls), but Soul Sanctums can be more convenient when you are alone/everyone around is idle. The cost is 2 chaos souls to do a normal purification, 1 in co-op. Now what do these do? Each of the above virtues has a benefit when you equip the soul. These are called “Soul Skills,” and have a fairly long cooldown. They are not passive, and must be activated, but the catch is that you use the souls you purified to activate the power. If you run out of Hope souls, you can no longer use “Guidance of Hope” which gives you an increase to Crit Acc, Piercing, Attack Speed, Casting Speed, and Experience! They are definitely worth using, but only at the right time, unless you simply have tons of souls just lying around. While I hope more of these skills get added or get made unique per class, as it stands, it is a very special system, and I feel like it will draw players in pretty easily. It is a very cool concept all told.

Putting On The Shemp: Excited but Wary.

Yes, there is a cash shop. It’s a free-to-play game, so this is probably safe to assume even without playing the game. Most of the items are not available to be seen yet, so I do not know how “pertinent” it will be, whether it will be a requirement to play easily, or if it will simply be cosmetic. There is a “Leveling Aids” tab, so I imagine it will at the very least have boosts. Though there are Founders Packs that can be purchased before the game is released, I do not know if they will be around after.

Back to the gameplay though, one interesting change being done in Echo of Soul is a focus on manageable damage numbers. From the outset, the hp and damage dealt are incredibly small. At level 15 I was dropping 20-30 damage crits, and impressing those around me in the process! I don’t know how it will be at max level yet, but I have a feeling it will not scale to ridiculous Blizzard-Numbers.

Now before I close out these impressions, I have to share an unusual favorite part of this game. While most MMOs involve running around following the back of your character’s head/ass, Echo of Soul has a great reason for flipping the camera front side. No it has nothing to do with helping your gameplay experience. Though one of the biggest, coolest, and most adorable things about Echo of Soul has nothing to do with actual gameplay! 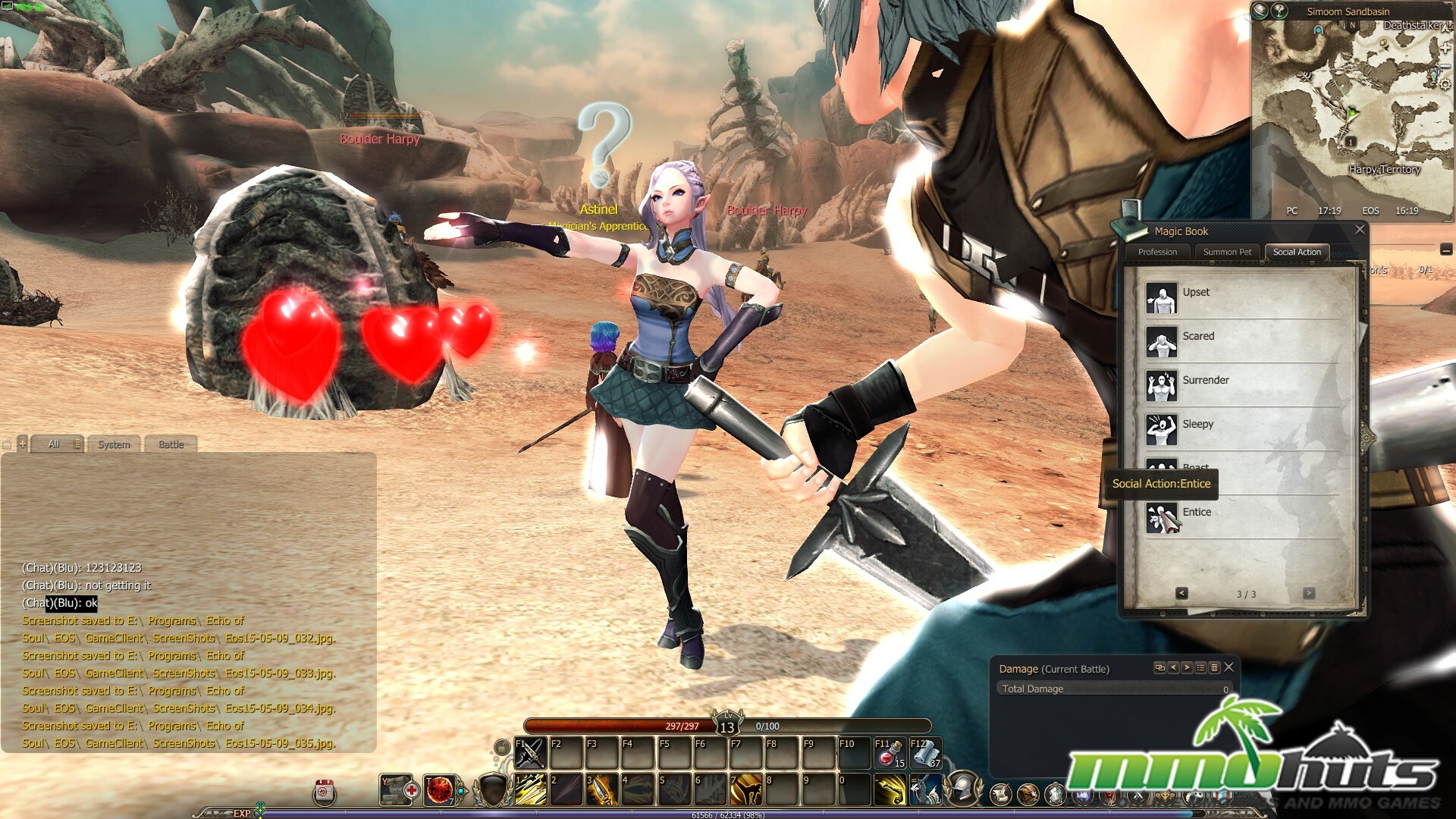 The emotes make Echo of Soul. No hyperbole.

Attached to this article should be a small set of gifs that shows off some of these cool emotes, filled with anime flair, floating hearts, glowing auras, lots of expressive faces and waving! They’re so grand, that they had to absolutely be mentioned. It was one of the first things my boss stumbled on during the preview earlier this year, and seeing my powerful magic girl waving and smiling cutely just filled me with joy. They will look different for each character, but will always be a joy to see. It’s little things like this that can draw me into a game, seeing the small touches that make it unique and special. Look forward to Echo of Soul; it’s going to capture players and really change their perspective of a free-to-play game.

Continue to Echo of Soul Emotes and Raffle Details >>