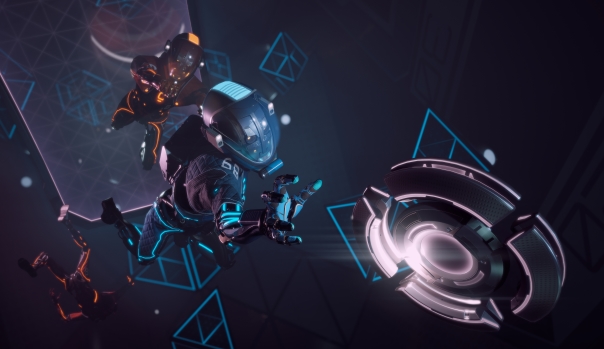 Echo Arena is a zero-gravity hockey-like game that takes place in an arena obviously inspired by Ender’s Game’s battle room. The physics of the game involve Newtonian conservation of momentum. Like Ender’s Game, a player can grab onto geometry in the arena, push off of it with their hands, and float without losing speed until they bounce off a wall or floating ‘star’ (to use lingo from Ender’s Game).

Using the Oculus Touch controllers, or the Vive wands with Revive, players use their physical hands to maneuver around, aim their thrust jets, and optionally punch other players in the face.

The game has received a positive reception during its beta tests. Posts about Echo Arena during the first beta almost took over Reddit’s /r/Oculus subreddit for a while. While player counts
have not been published, the waiting lobbies I have been in have seen a constant stream of players coming in and joining matches.

The game is also entertaining to watch and due to its similarity to sports like soccer and hockey, may draw a crowd of players who are not interested in playing the game or cannot afford to get required hardware. Unlike games like League of Legends, where knowledge of the game is a must to actually understand what is going on, in Echo Arena any spectator can understand grabbing a disc, passing, and players struggling to punch each other in the face. With the right support for viewing angles during a match, and the right commentators, I can envision this game really taking off.

The timing couldn’t have been better. Oculus has just released a $400 entry point for virtual reality hardware which appears to be selling like hotcakes. I see Echo Arena as one ‘killer app’ of VR.

The VR Challenger League for Echo Arena, sponsored by Intel, Oculus, and ESL is starting on August 24th, and players are already beginning to form teams and dream up coordinated strategies and tactics to get an advantage. The U.S. military has had “Ender’s Game” on its reading list for a while, but this may be the only game where tactics from the book can be directly applicable to the physics of the game.

Another interesting observation is how physically demanding the game is. When I started playing, I could only get in a few matches before I was out of breath and my throwing arm was in pain. This is the first time I’ve ever received the advice of “doing pushups” to get better at a video game. VR games may get an entire generation of video game junkies in shape.

Whether this game ultimately succeeds is anyone’s guess, but when I am floating around in zero gravity, looking down at my robot body, and pushing myself off of a virtual object towards the enemy’s goal, I feel like I am getting a glimpse of the future.