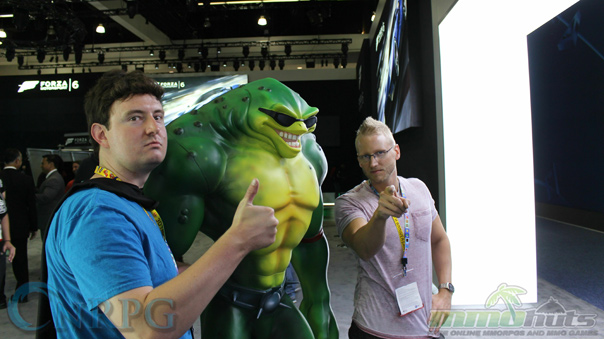 Gameloft announced their new free-to-play mobile game, Siegefall, ahead of E3 last week, and it comes out next week – surprise! While at E3 this week we stopped by Gameloft’s booth to gather as much information about Siegefall as we could before its release. As a quick overview, Siegefall is a beautiful tactics and base building game set in the realm of fantasy. Within the game there are multiple campaigns, varied melee and ranged units (including dragons and trolls!), card mechanics, and PvP base invasions. 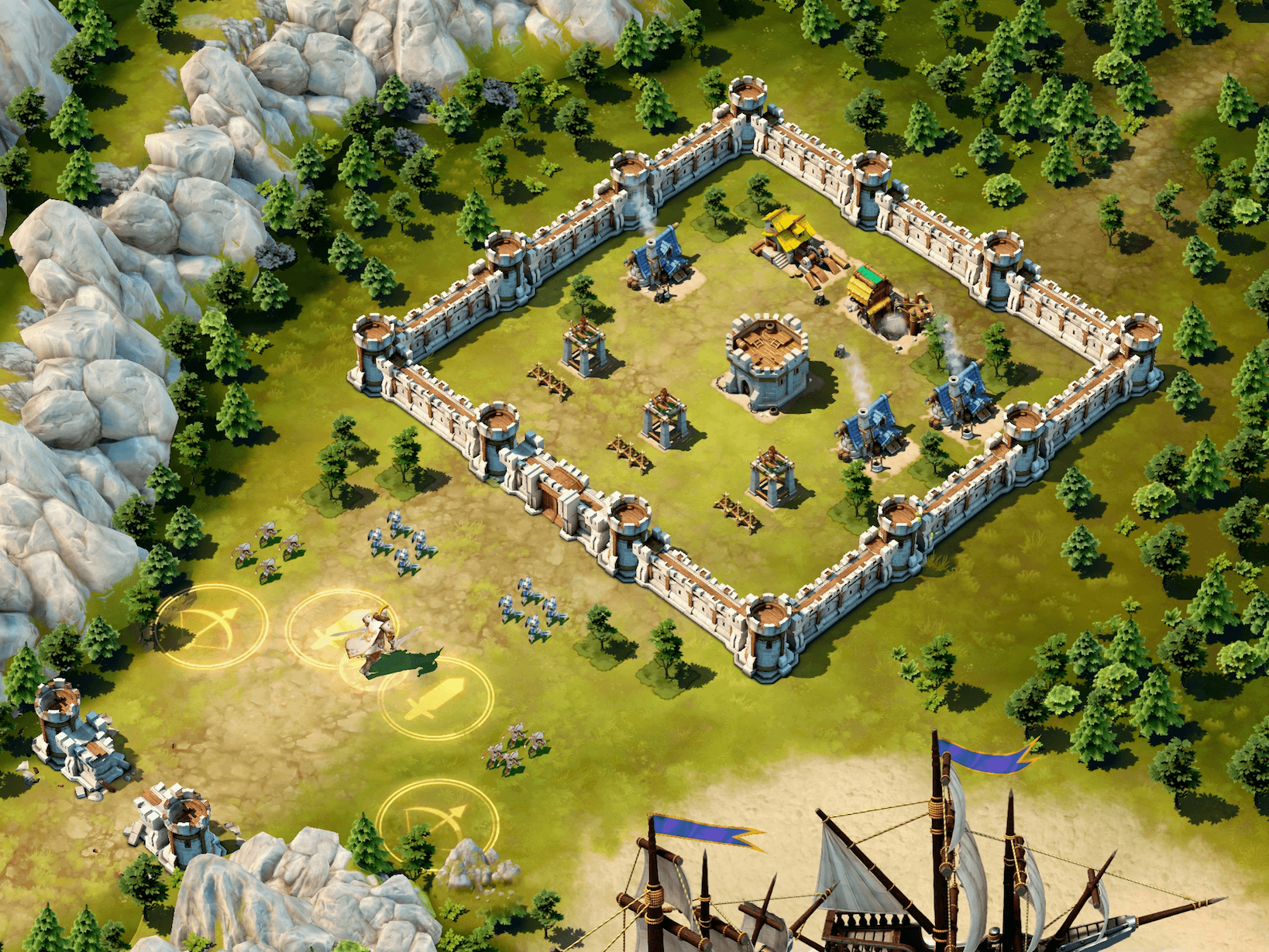 Graphically, Siegefall is really polished and a delight to look at. The art style is clean, units and buildings are easily distinguishable, and the animations are solid. All tapping and dragging of units, cards, and the camera feels responsive with elegant UI animations. From an audio standpoint, what we have seen is par for the course for the fantasy setting (sword clanking, fiery explosions, etc) with the exception of some well voiced lines. Although not every piece if dialogue is voiced, but enough of it is such that it’s a noticeable when it does occur. 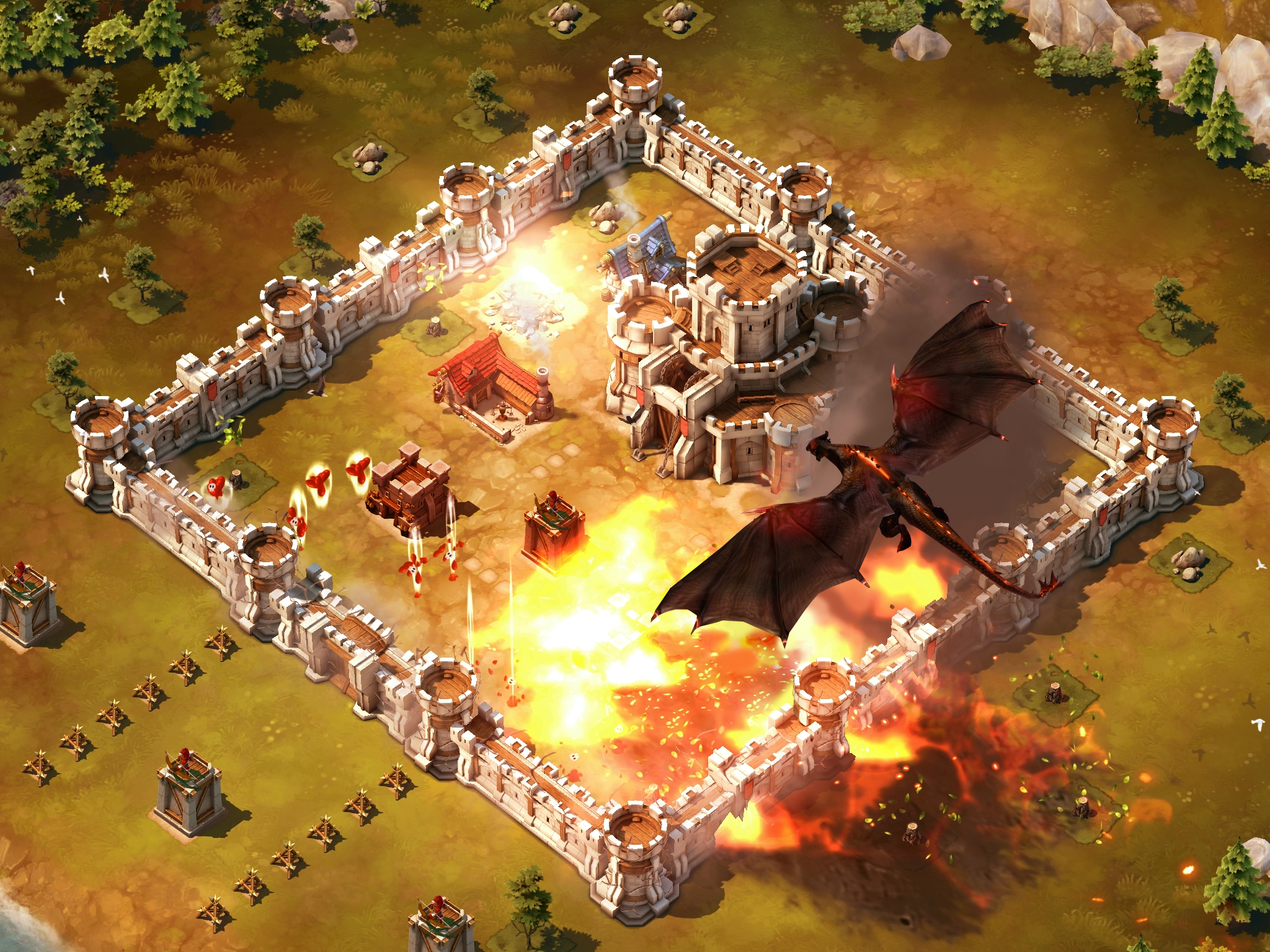 “Rain hellfire upon them!”

During our time with Siegefall we played through almost half of the first campaign and the tutorial, taking about an hour. We sort of rushed through the first 15-ish levels in an effort to see as much content as possible, but we think that the typical player with more time on their hands will take a bit longer than that to progress – also, levels will increase in complexity and challenge as time goes on. The overworld map acts as a campaign selection screen, a progression meter, and the gateway to the PvP base invasions. At launch, the game will come with three campaigns, featuring 25 levels each and a “challenge mode” set of levels that are more difficult. 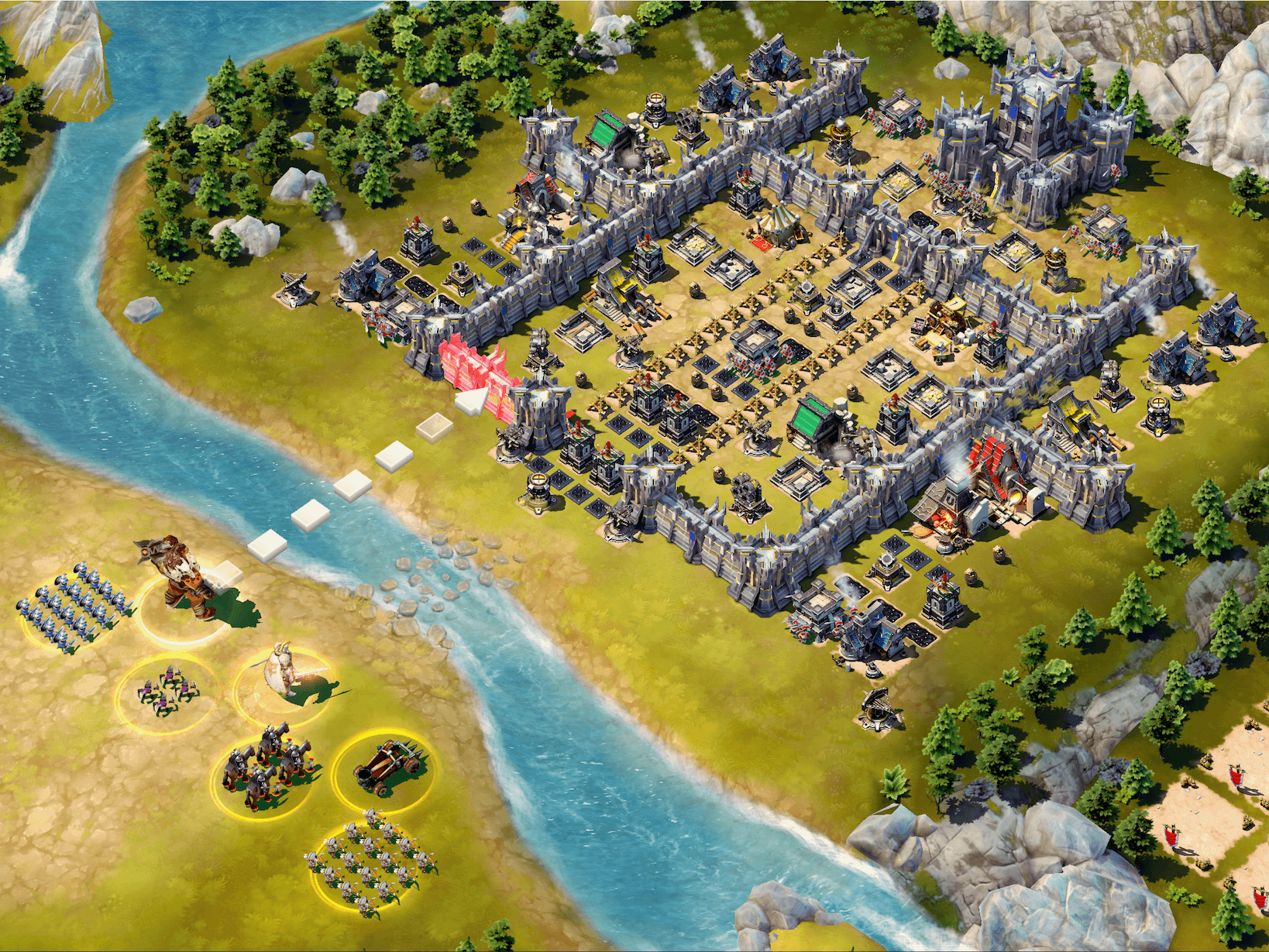 “Attacking is real simple – just drag an arrow from your unit over to the enemy.”

The main gameplay in Siegefall is a mix of the main hero’s movement, sending your units charging against enemies, looting and reinforcing units, and playing cards brought into battle. Controlling the main hero is as simple and sliding your finger from him to a point on the map or an enemy. Your recruited units will charge at the nearest thing to kill almost mindlessly after the first attack unless you have a special card to give them a new order with, so expect to lose a lot of them. Loot is automatically gathered when enemy units or buildings are destroyed, and is used to recruit more units at the initial spawn point on the map. Cards are selected before going into battle, and are played by swiping them upward from the bottom of the screen to the area you want them to tae effect, and plying them feels a lot like flicking a card in Hearthstone. Many cards are damage and healing AOEs, allowing you to quickly help out your forces or your hero as they progress through the map. 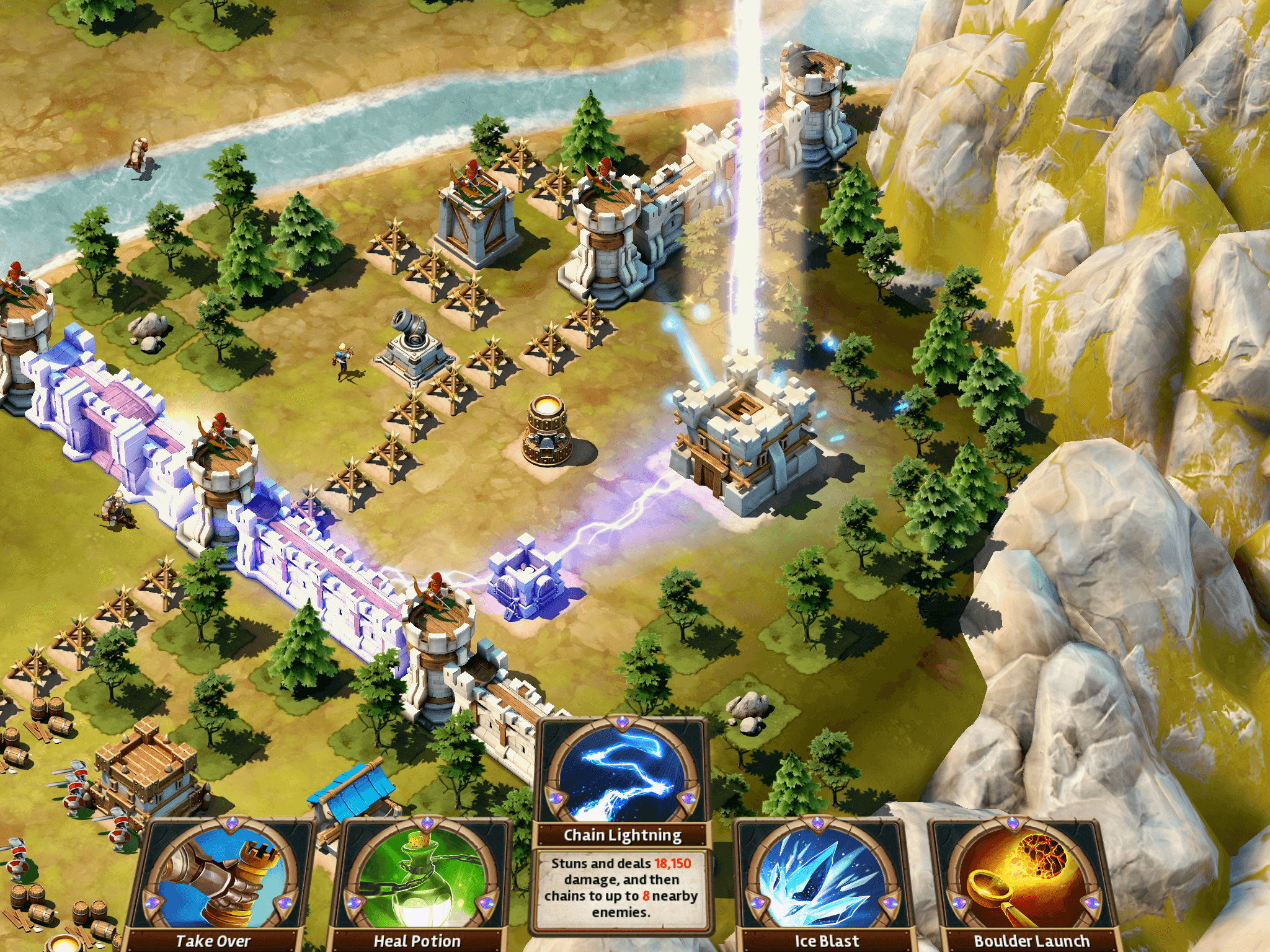 A majority of the battle time involves microing the hero unit; navigating him around sentry towers or tar pits is crucial to his survival. If the hero is lost during gameplay, he can be resurrected at the cost of loot acquired in the mission. The rest of the battle is all about carefully watching your units and assessing whether or not you need to assist them with your hero. While the hero unit is really good, not all units are cannon fodder. Trolls aren’t slouches, and the playable dragon cards are really useful for taking control over a dire situation with a huge, screen-sized, AOE. 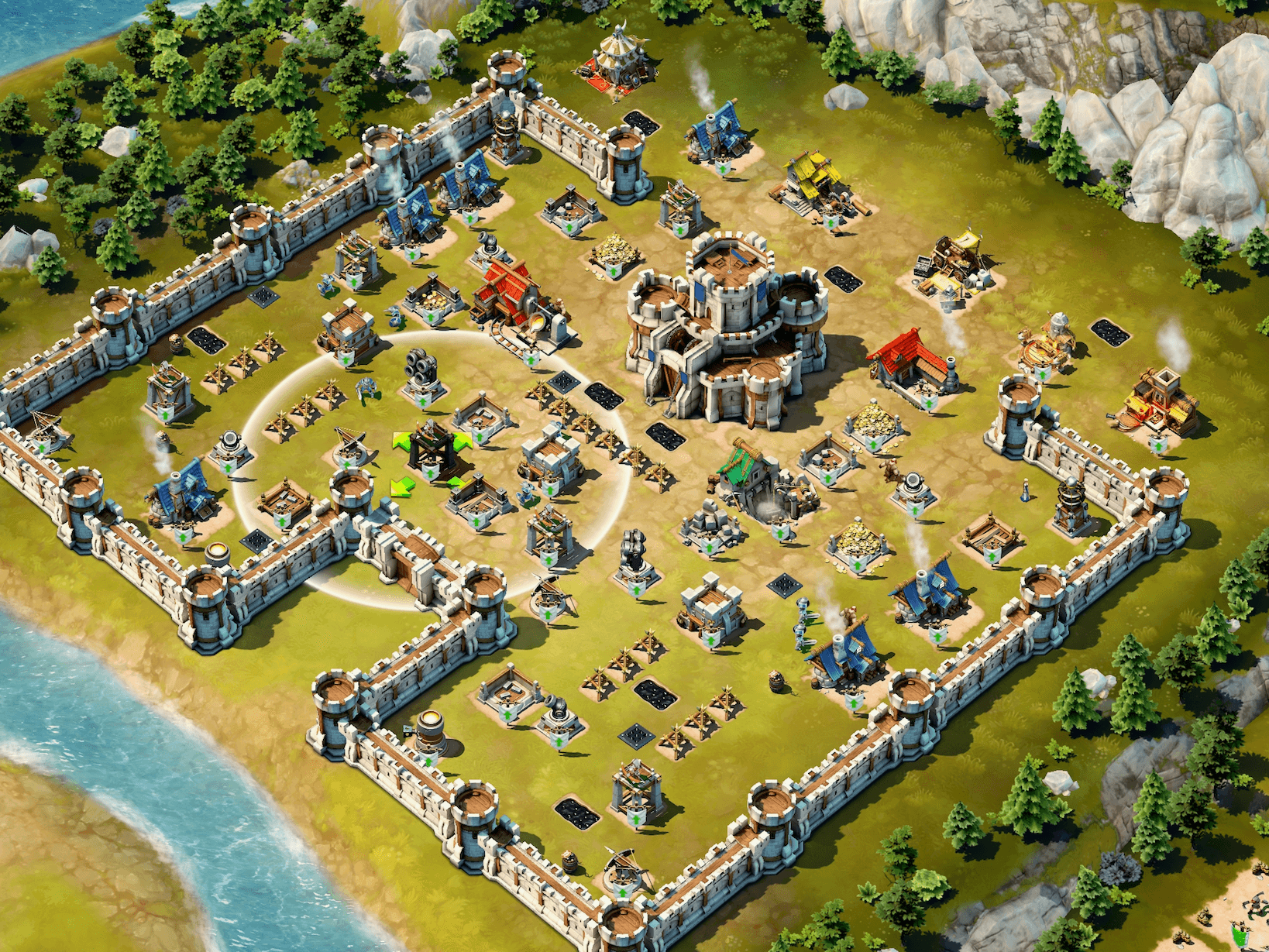 “Base building is important, and shows off how much you rock at this game.”

While not in combat, it’s all about collecting additional resources that have accrued at your main base, preparing for the next battle, and queuing up upgrades and placing defenses for your base that will protect it against invasions. Collecting resources involves tapping specific areas on the base, and their rate of production is tied to how many upgrades have been completed at certain buildings. Preparing for battle requires “scouting” the next level ahead and selecting which units are going to come with you for it. Upgrade queuing is exactly as it sounds – spend gold, which is rewarded for completing levels and looting enemy buildings, to start upgrades. Upgrades with less than 60 seconds to go can be immediately finished if you’re active about managing your base, and they can be completed instantly from start to finish with the expenditure of gems. Gems are occasionally rewarded with hero level gains, overall stat achievements like looting 100 buildings, or by purchasing them. Gems act as the game’s primary micro transaction, and they’re not required to play the game. Base defense construction doesn’t require much time, but it does require gold so you need to balance upgrades, recruitment, and upgrade costs. 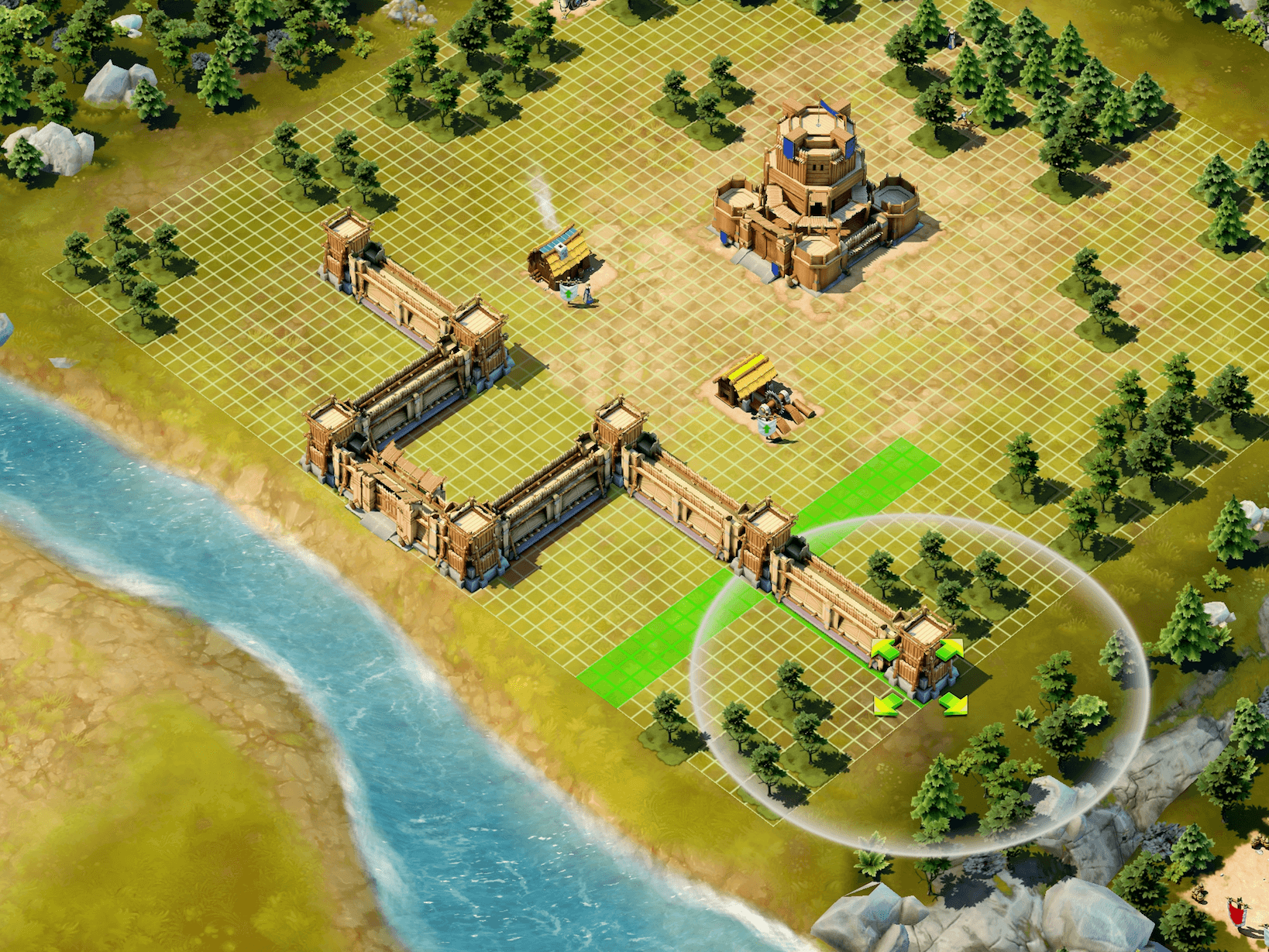 “Building base defenses is a real good idea, and you have to start somewhere – just saying.”

Overall, we see Siegefall like a combination of a mini Age of Empires and The Mighty Quest for Epic Loot, but on a mobile platform. Many key elements that make both of the aforementioned games successful are present in Siegefall, like unit microing, base upgrades, and base defense from players. Although our hands-on time with Siegefall was brief, we think it looks really strong and poised to be a hit on release. Siegefall will be launching on both iOS and Android simultaneously, and it’s probably best played on a tablet. We’ll be bringing you a review of the game soon after launch – so check back soon!

Continue to Sights of E3 wrap-up!