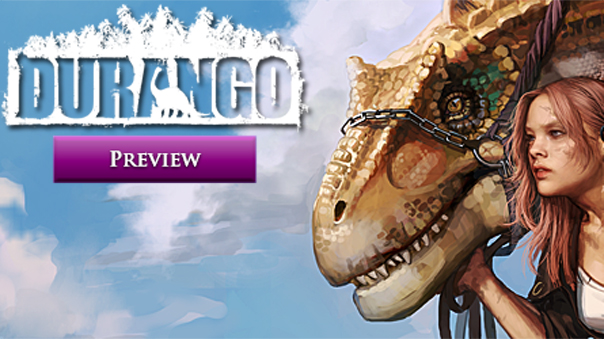 Durango is an upcoming free-to-play survival MMORPG from Nexon and What! Studio. It’s a game where your character is transported to a different world named after the game title where dinosaurs still roam the world. Your task from then on is to survive in this harsh world using the materials you can get from the land, cast away style, and eventually create your own little world as you progress and learn more. 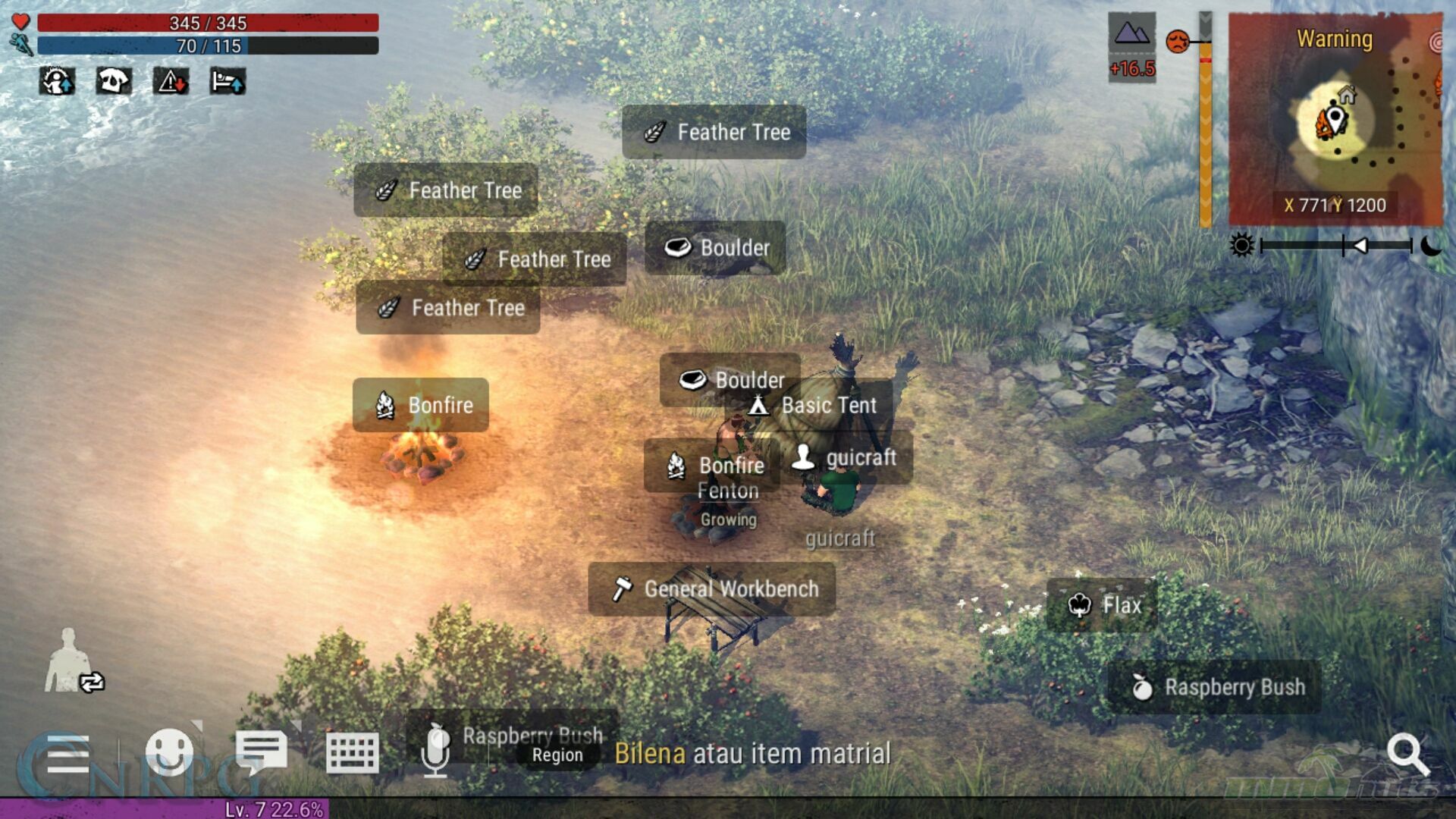 The UI is awesome, if you phone has a large enough screen to work with it.

You are transported into a tropical world called Durango as your character experiences scenes that feel taken right out of the Korean zombie movie, Train to Busan. But instead of zombies, you get dinosaurs attacking your train. Once you reach your destination in Durango, you need to survive by crafting whatever you can out of whatever you can find safely. You need to harvest food, craft materials and tools and even hunt dinosaurs for not only sustenance, but also clothes and weapons.

Durango utilizes a lot of gameplay systems that are made famous by survival games such as H1Z1 and Don’t Starve or its multiplayer version, Don’t Starve Together. To those who aren’t familiar with the mentioned titles, this means the game requires you to farm these various resources to play and thrive in game. After settling down in a location that you decide as your home, you would then need to explore your home island, and the other subsequent islands that are opened to you to gather more resources and, at the same time, create communities. 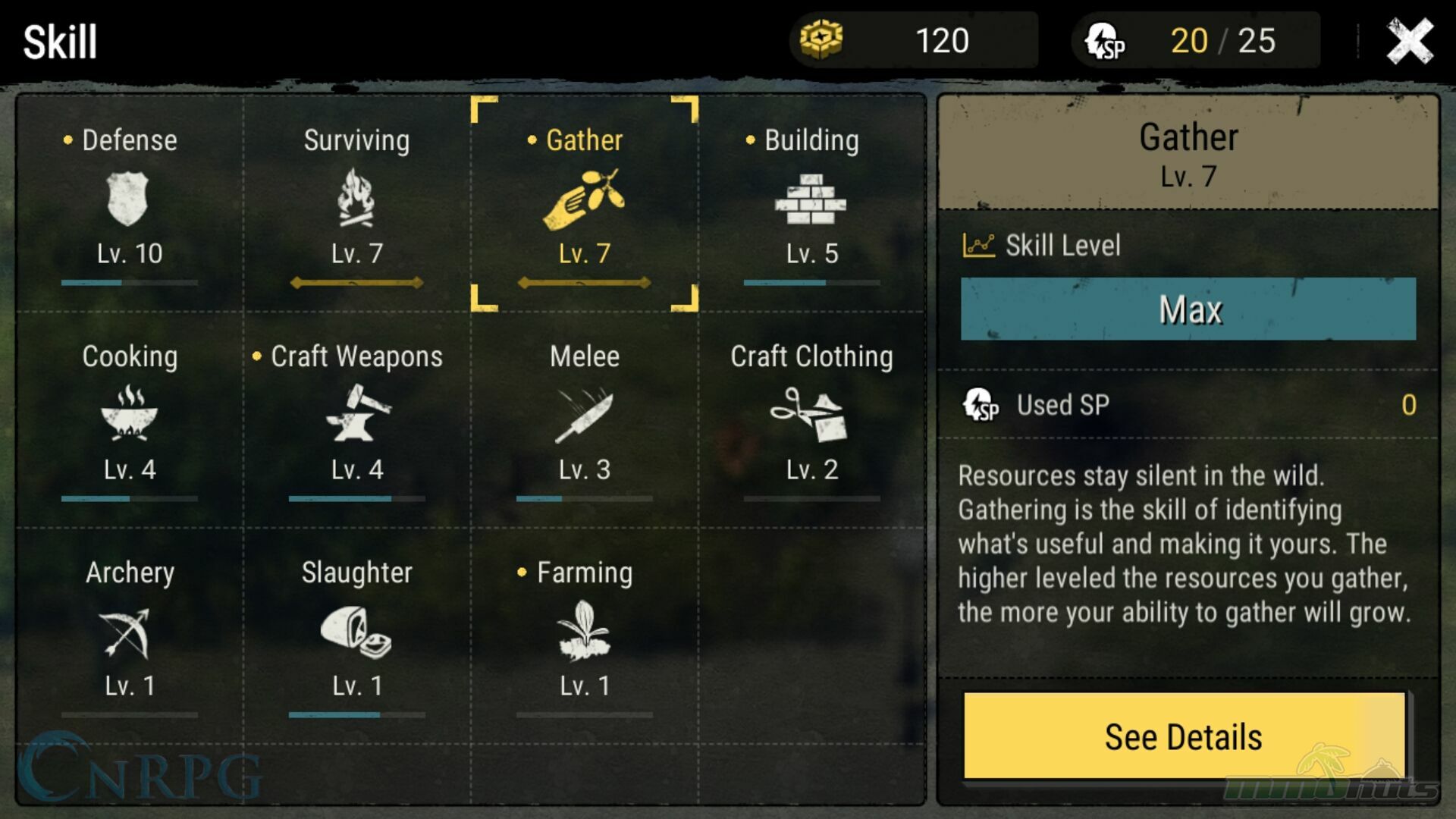 Progression feels really natural and free flowing. You get better at the stuff you do more!

What’s really awesome and surprising though in Durango is that this is the first time I’ve experienced a mobile survival game that let me immerse myself in a similar manner as the PC survival games I’ve previously played. What’s more is that, unlike some titles, I actually meet up and even interact with people playing at the same time as me.

One of the really awesome elements in Durango is the skill tree system that you are introduced into earlier on the game. Depending on the chosen character you have, you will be given a specific boost in one of the skill trees that is integral in game. While the specialization does help out at the beginning of the experience, you can just as easily switch specializations further down the road depending on what kind of gameplay you’d like to have. What if you decided to start as an engineer, but once experience the game realized the role of hunter was a better fit? Then just invest time in hunting low leveled dinosaurs and go through the motions of learning to hunt, kill and slaughter said dinosaurs and you’ll effectively change your class in no time. 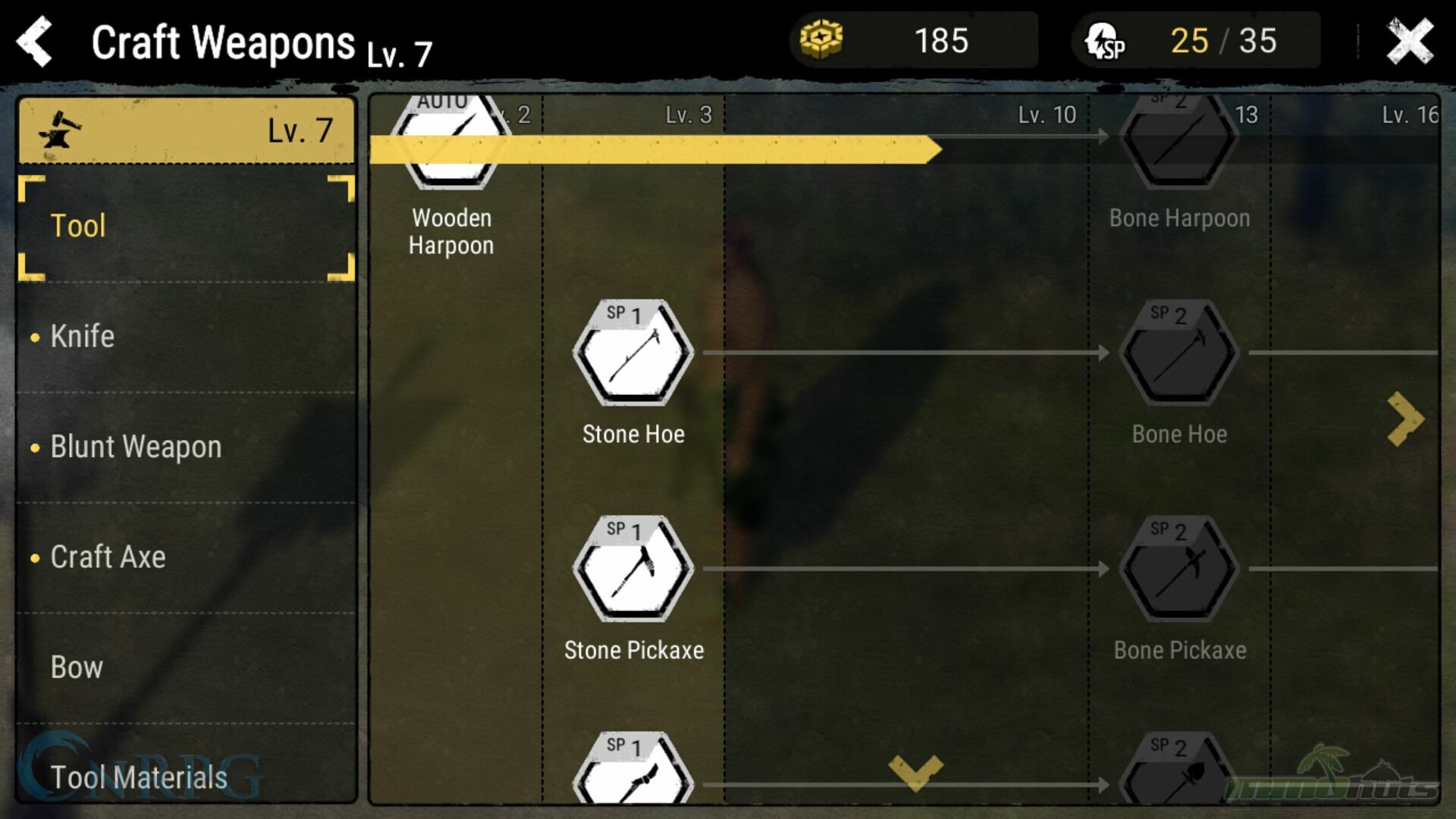 One of the things I really loved with my experience in Durango is the way your character growth feels organic. The game allows you to grow into the gameplay preference you have in the world instead of forcing you to just follow through a predetermined set of prerequisites to become a certain class. Though this changes as you discover the radio school system, where you would have to go through the hoops of accomplishing tasks to learn a specific skill set. But, you still have the option to opt out of it midway without the loss of any of the skills your character learned along the way.

The game plays out like a truly sandbox title which is still unheard of on the mobile platform, and it’s such a great and immersive experience that I never actually expected from a mobile title till today. 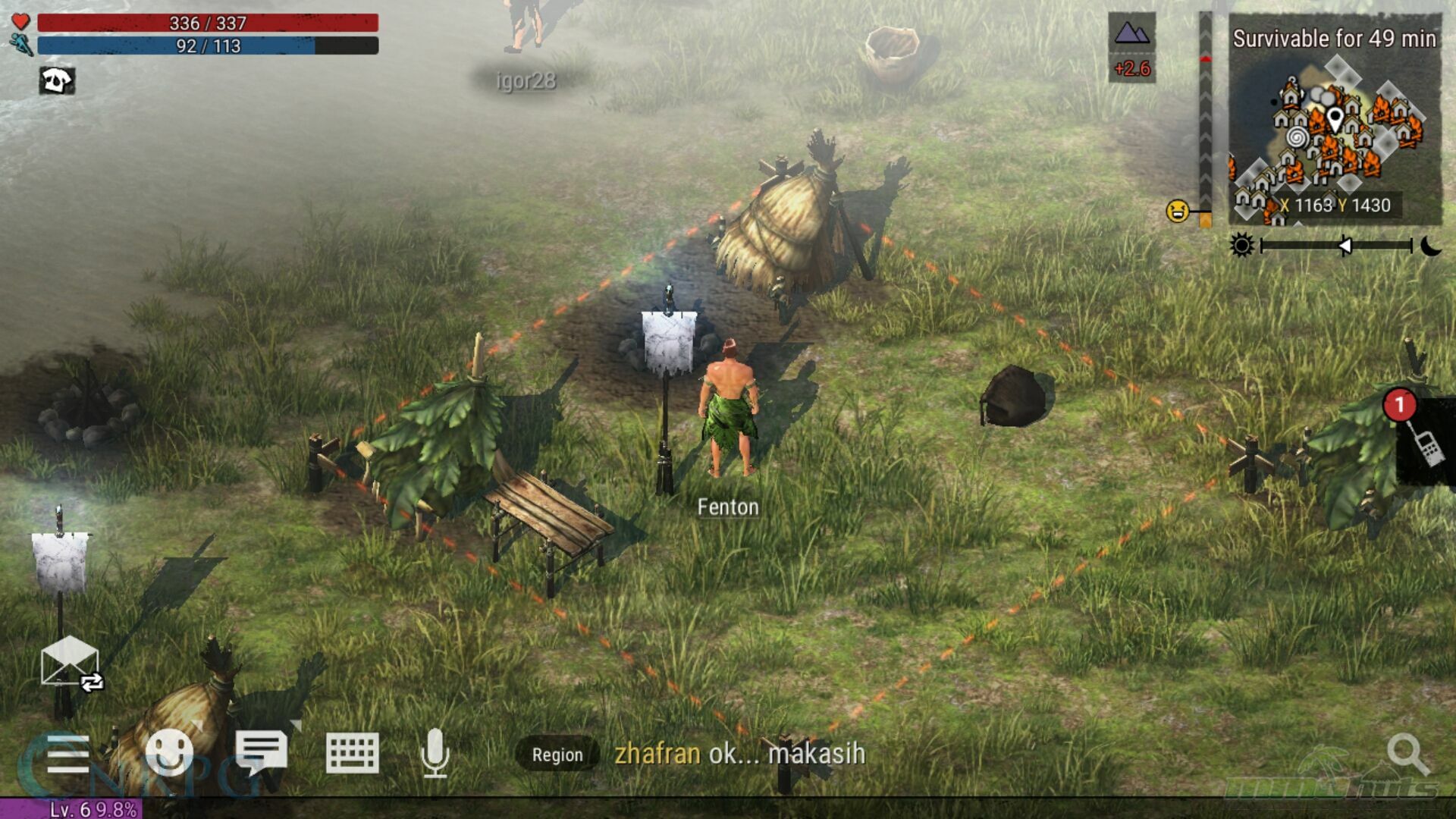 The visuals are amazing and clear.

I really liked the concept that instead of the already overused zombie apocalypse as the background of the game, Nexon decided to play on the idea that your character lives in a world where dinosaurs exist. This is not only a refreshing theme, but it also opens yourself up into a world that’s rarely explored in video games up until recently.

I’ve had it with the zombie apocalypse and zombies in general, and I know I’m not alone. That’s why Durango is such a breath of fresh air. There’s a reason the zombie survival titles are literally going the way of the dinosaur while ARK continues to thrive after all. 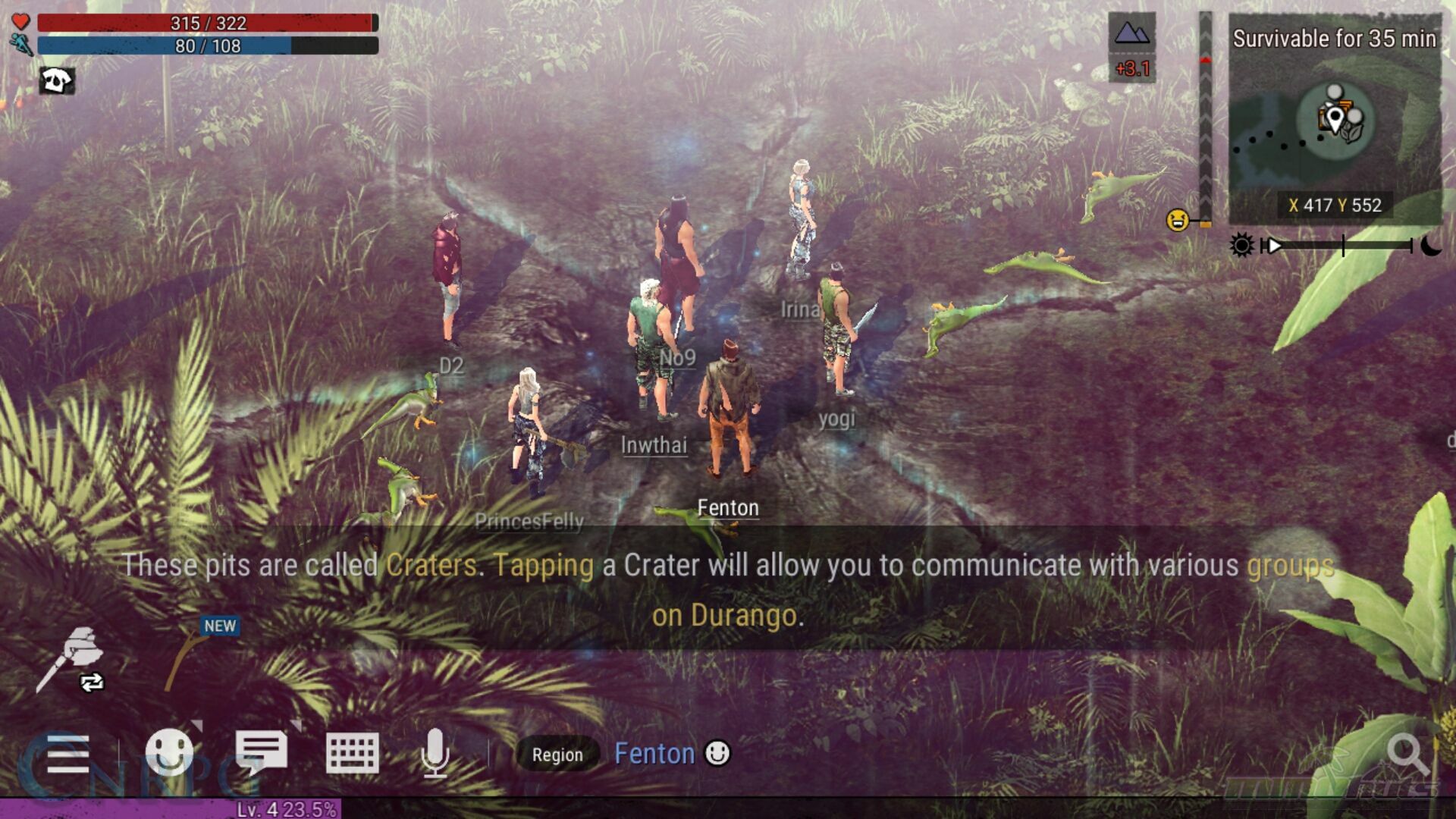 Craters allow you to easily group up with others in a hurry.

Another unique gameplay feature that’s a first for me is the way craters and unstable land allow you to explore and communicate with NPCs and other players. Craters act as warp points so players can quickly travel between lands and in-game areas to meet up with others. 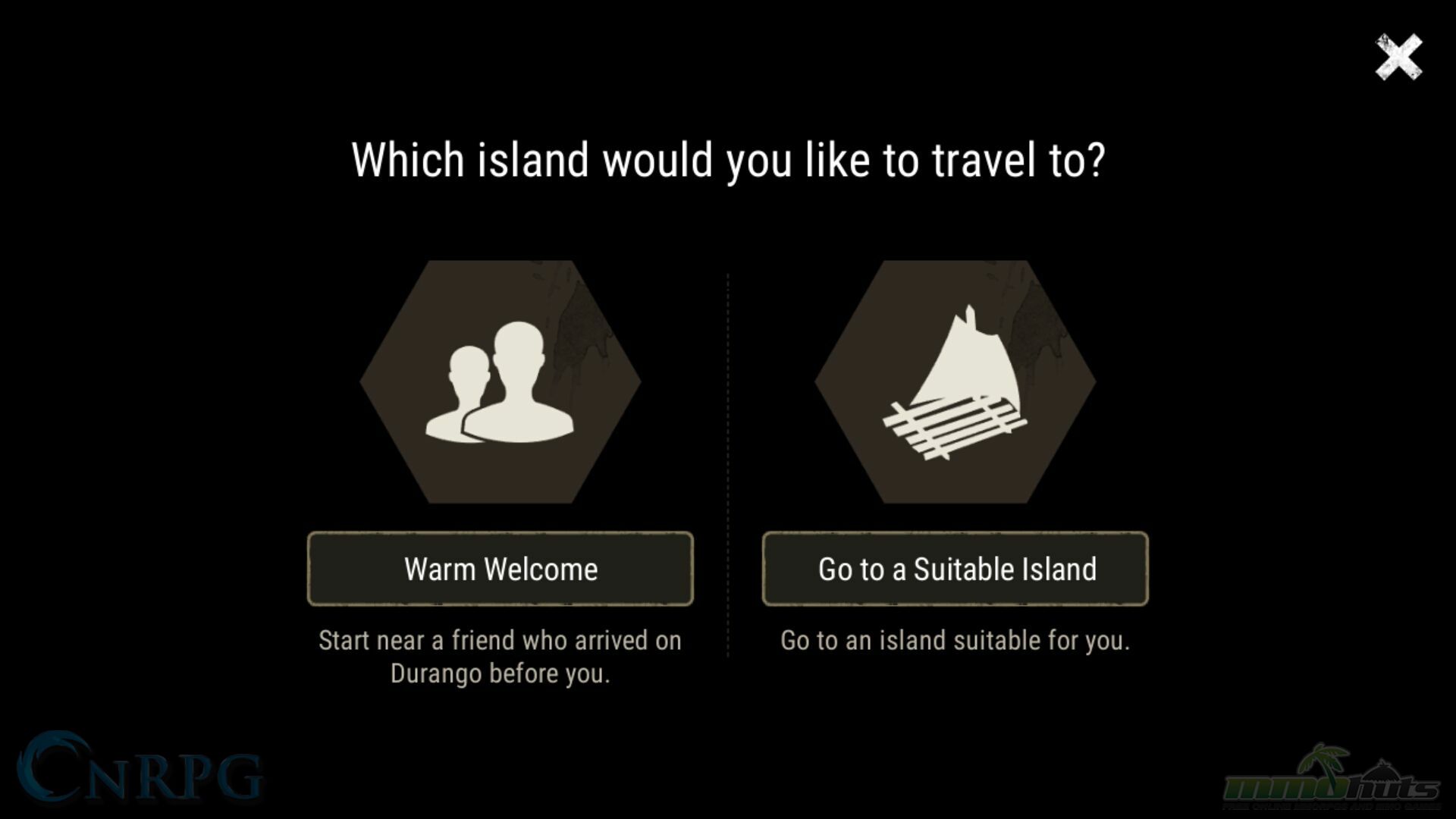 It's not optimal but you're more than welcome to live the hermit's life.

This amount of freedom is unprecedented in a mobile title and this is why I loved my Durango experience more.

There is one hitch for those who would want to get into the game however. Since Durango is a world that requires you to live off the land, the process of farming materials is unavoidable. This is a tedious and mind-numbing unskippable gameplay process which can turn off a lot of players. But if you’re the kind of person who finds games like Minecraft or Terraria to be a fun engaging experience, then Durango won’t feel any worse than what you have experienced before. 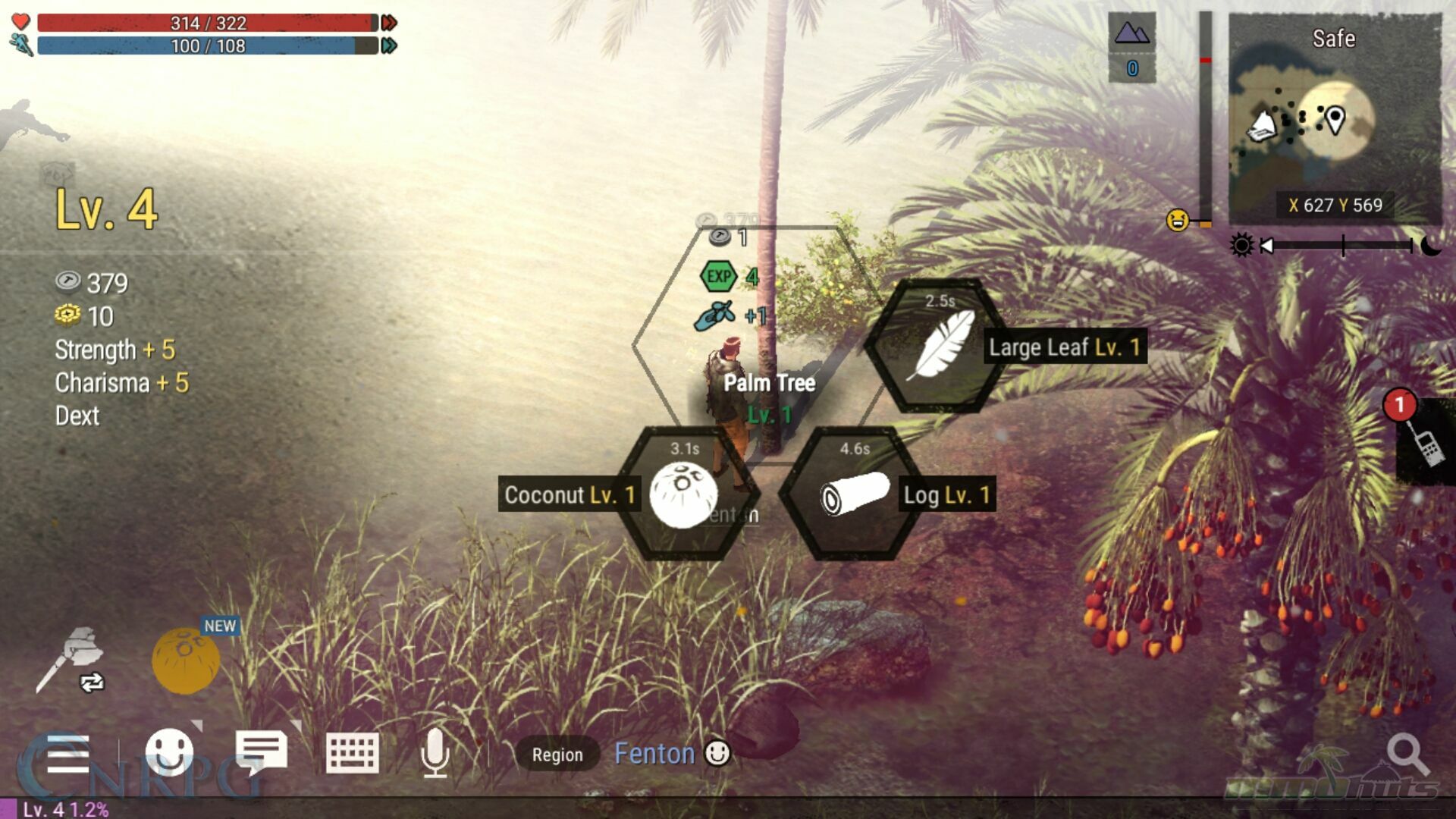 On all accounts Durango hits my checklist of requirements to be an amazing mobile game. It’s immersive, allows more freedom for the players compared to the usual mobile game trash you have on the market, and looks beautiful all the while.

There are still a few kinks with the system though, and one example that I’ve experienced is the way the perspective transitions that sometimes muddles up the view. But that’s just a minor problem that can be fixed as the game is still in its limited beta stage. I’m excited to experience the game once it goes full-force and people are just swarming into Durango to get their own dinosaur world experience in-game.

State of the Beta: Excellent
Durango is a title that’s surprisingly immersive for a mobile game. It’s a must download for anyone who would want to have their eyes glued on their mobile phones. It’s a timesink that’s only limitation is the world that it’s hedged itself into. But it’s a refreshing experience nonetheless. If you’re going to go all in on your phone for an MMO experience, Durango is the top tier choice.