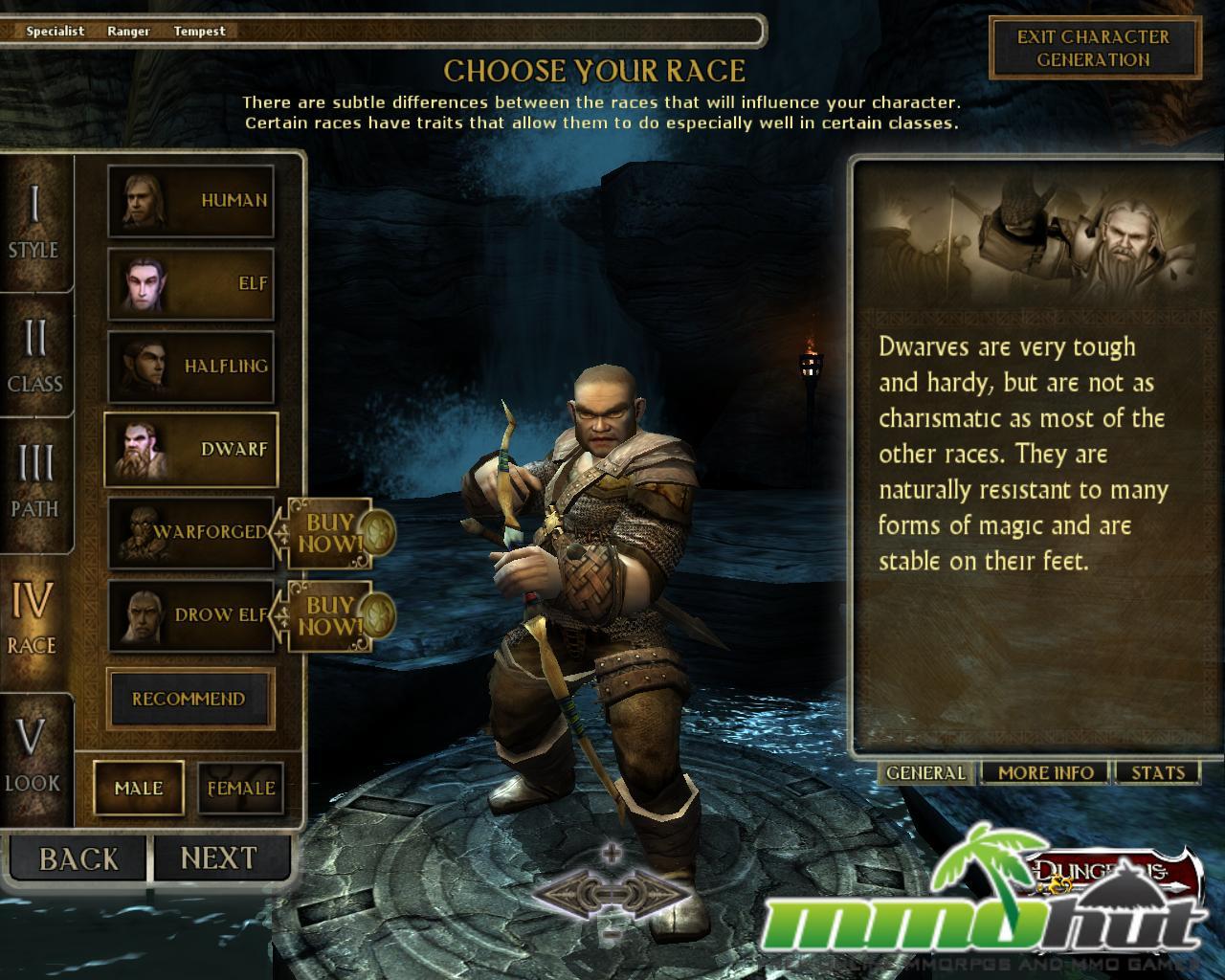 I first ran across Dungeons and Dragons (D&D for short) in a comic book shop when I was in grade school. Since then, I’ve played the venerable tabletop role playing game off and on again in my basement with bags full of dice, pencils, notebooks and plenty of hardcover instruction manuals. I always imagined D&D would make a great video game since almost all fantasy-themed video games already borrowed so much from it. Dozens of high quality games were eventually released based on the D&D franchise, including the Baulder’s Gate, Neverwinter Nights, and Icewind Dale series. Unfortunately, all of these titles lacked something that made D&D special – the social experience. You just can’t play D&D alone. Finally, in February of 2008, Turbine partnered with Wizards of the Coast to remedy this situation by releasing the MMORPG Dungeons & Dragons Online: Stormreach.

Dungeons & Dragons Online was originally released as a subscription based game where players had to pay $15 a month to access the game. During the time of release this was the standard model in the industry but with World of Warcraft as a direct competitor, things looked grim. Eventually the decision was made to re-launch the game as Dungeons & Dragons Online: Eberron Unlimited which would be free-to-play with optional micropayments as the primary means of revenue. Fortunately, all the content updates that went into the game during its pay-to-play life are included in the newly re-launched version. Major updates to the game are known as modules, and there have been a total of eight thus far. Each module has added new dungeons, quests, items, gameplay fixes and so on. Several new races and classes have been introduced through modules, such as the Monk in module 7. New players do not need to know the history of the game in order to enjoy it, but should be aware that they are experiencing a game that has had years of refinement. 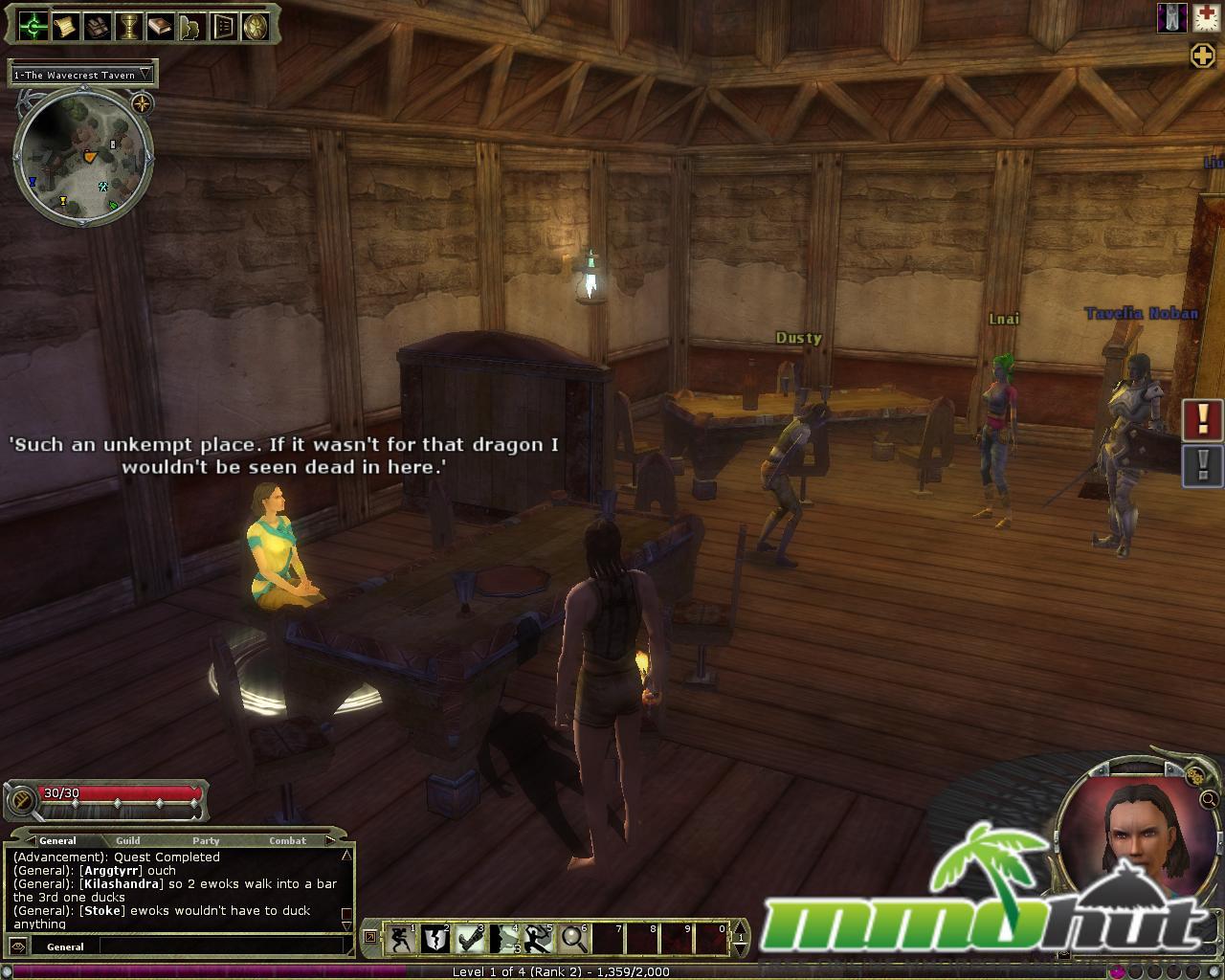 Bring Out the Character Sheets!

One of the most enjoyable activities in tabletop D&D is the process of creating a new character. Players choose their race, class, distribute stat points, skills points, and select their starting feats. The level of customization all these steps left open was mind boggling, and it was possible to spend hours researching the best build. Dungeons & Dragons Online manages to preserve that deep character creation process, but also to streamline it for players who just want to get on with it. There are three types of classes available: Melee, Spell, and Specialist. Ten of the eleven archetypes should be familiar to gamers, with the exception being the “Favored Soul” class. That class (along with the Monk) must be purchased before they can be selected, so new players don’t even have to worry about the cleric/sorcerer hybrid. As for races, there are a total of six, though two of them, the Warforged and Drow Elf, must be purchased before use. Each race has unique racial bonuses and flaws which are explained during character creation. The game offers players three predesigned ‘paths’ for each class, but also allows players to customize their skills and feats on their own. Paths can best be described as specializations. So for example a Ranger can chose to pursue skills and feats that allow him to proficiently duel-wield weapons or to perfect his long ranged bow and arrow use. Even after character creation, players can always switch paths or decide on their own what abilities to learn. The ability to multiclass adds yet another layer of complexity to the game, but new players should just stick to the pre made templates for their first character. Appearance customization is similarly in-depth with plenty of hair, nose, lip, eye, and ear options.

After the intricate character creation process players find themselves shipwrecked on Korthos Island which acts as a newbie area for the first two or three levels. An NPC guides players along a path towards a grotto where they run through a dungeon with an AI party, which includes a cleric, sorcerer, and rogue. A special buff prevents players from dying during this introductory dungeon, but it does serve as a good example of what gameplay is like in Dungeons & Dragons Online. A narrator acts as the ‘dungeon master’ and provides players with flavor text and instructions as they progress through an adventure. Dungeons generally contain plenty of secret treasures, traps, and optional areas which helps them feel like an authentic D&D adventure. I even had to use my ‘search’ skill to detect a hidden door during one of the early dungeons. Dungeons & Dragons Online loosely follows the 3.5 D&D rules which, among other things, means players have a limited amount of spells per day. Health points do not regenerate automatically while on an adventure, but players can rest at special rest shrines to restore their hp and daily spell limits. 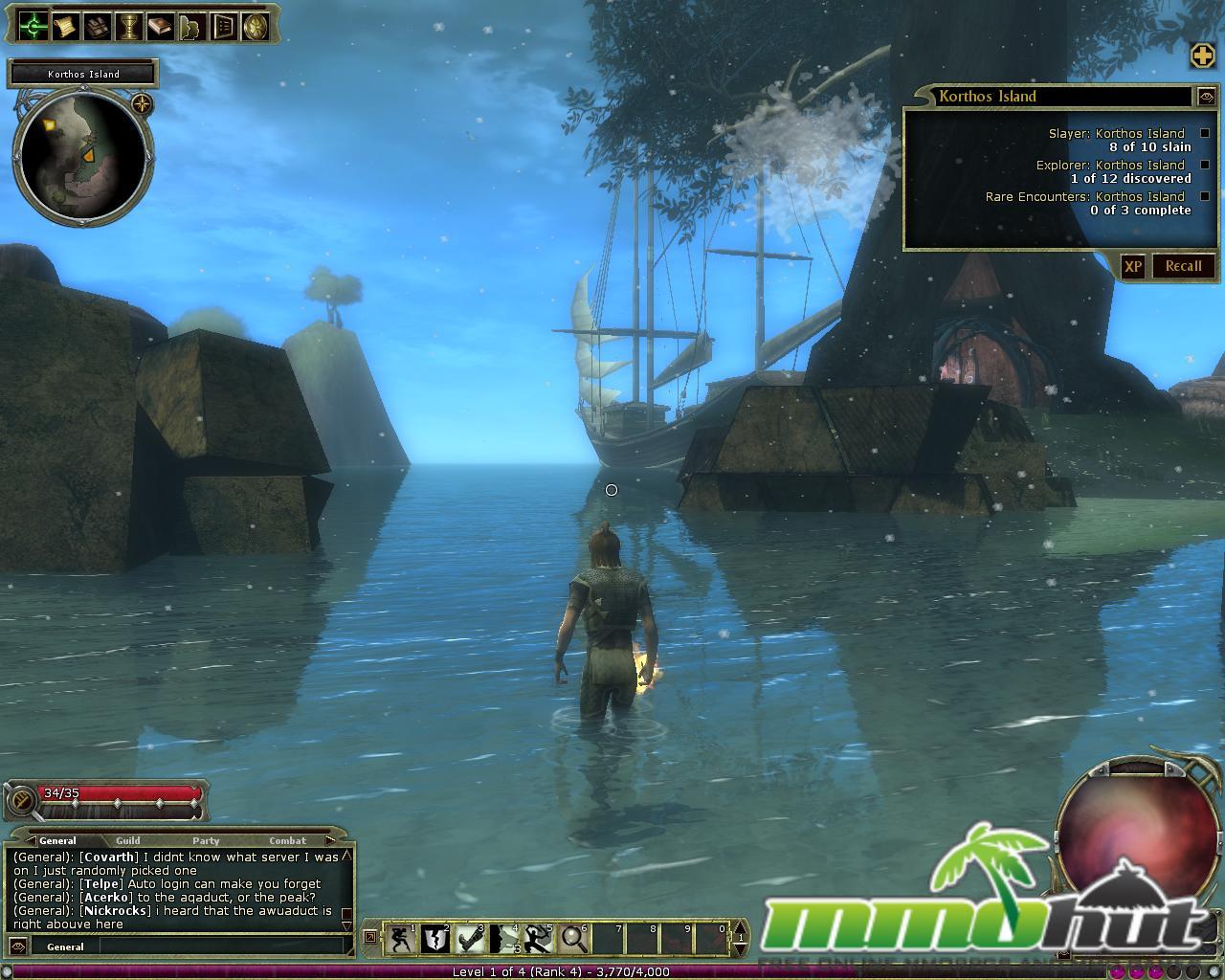 Combat in Dungeons & Dragons Online resembles the gameplay in action-RPGs where players have to click or hold down the left mouse button to swing their weapons. For every swing, ability or spell the game automatically rolls the appropriate dice on the left hand side of the screen to determine whether players hit their target and how much damage they deal. All equipment is labeled in the same fashion as the tabletop game. For example, a long sword might have a damage stat of ‘1d8’ which means it deals 1-8 damage (plus any stat or ability modifiers) on each successful attack. For melee attacks, the twenty sided dice reigns supreme and players must roll a number that beats the defender’s AC (armor class.) Gameplay in D&D Online much more closely resembles Baldur’s Gate: Dark Alliance for home consoles than it does PCRPGs based on the D&D franchise, such as Neverwinter Nights. Overall, this is a good thing since it makes the game accessible to a broader audience who are more interested in hack & slash than strategy. The fact that dungeons are riddled with puzzles to solve, levers to switch on, and so on also help make the game more attractive to gamers who grew up playing Zelda and other console action-adventure titles.

Dungeons & Dragons Online is set in the world of Eberron, which was originally a campaign setting for D&D. What sets Eberron apart from the traditional D&D fantasy landscape is the inclusion of non-medieval technologies such as trains, skyships and mechanical beings. The Warforged race is a good example of this since they were originally automatons constructed by the other races. Throughout their adventures players will encounter factories and other signs of industry, though all of this technology is powered by magic rather than fossil fuels in Eberron. The world itself is structured in a fashion similar to the way Guild Wars structures things. All areas outside towns are instanced for each individual player or party leaving only the towns as true persistent areas where players can interact freely. There are costs and benefits to this system but for D&D Online I feel it makes a good fit. Thick flavor text and lore are key components of any D&D experience and instancing is the only way to accommodate the experience of being the first person to venture into a forgotten cavern. If there were dozens of players already camping the elder gazer spawn, it just wouldn’t make much sense. Like with most MMORPGs, players are free to skip the quest dialogue but I would advise against it. There are far fewer ‘filler’ quests in D&D Online than there are in other MMORPGs. Almost every quest is tied to the ‘big picture’ of the area you’re currently exploring. For example, Kathos Island is beset by several troubles which players slowly learn are interlinked. Dungeons themselves are repeatable and come in four difficulty settings. The easiest method of clearing adventures is the solo mode which is only available to those playing by themselves. From my experience solo dungeons are a bit too easy. I plowed through every monster and boss I encountered and barely ever needed a rest. The rewards available in dungeons increase with the difficulty but the first few dungeons aren’t worth repeating since the entire first area serves as more of an introduction to the game than anything else. 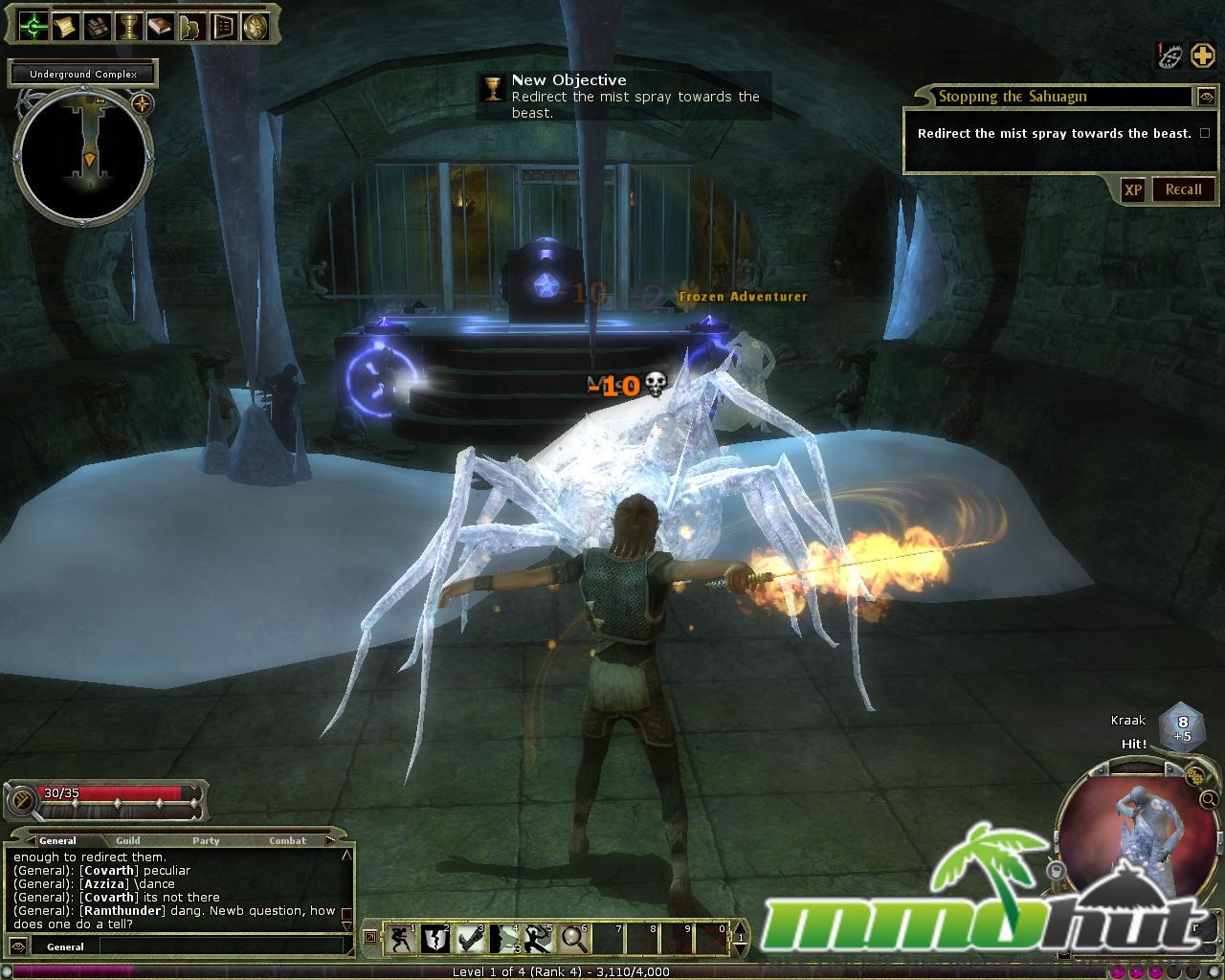 After clearing things up in Korthos Island, players are free to set sail towards Stormreach where more adventures await. Free players can experience the bulk of content available in Stormreach and its vicinity but additional adventure supplements must be purchased from the D&D Store with Turbine points. There are several in-game methods of earning Turbine points (such as hitting certain levels), so with persistence players can slowly unlock additional content. Players start with 50 points and can purchase additional points in amounts of 400, 900, 1500, and 5000. Discounts are given for volume with $6.25 buying 400 points and $49.99 yielding 5000. New classes & races cost around 590 points while adventure packs cost anywhere from 800-1000 points. New players won’t need to worry about purchasing new content for a long time since there are plenty of adventures to be had in Stormreach. The maximum level in Dungeons & Dragons Online is 20 which sounds low but the game has done a good job of breaking each level into various ‘ranks’ to keep the pacing tolerable. Additionally, the game throws plenty of equipment rewards your way with the completion of quests, so your character’s growth is always noticeable. Besides raiding dungeons, players can participate in PvP which was added in module 3. Besides challenging one another to duels, players can participate in all-out brawls in local taverns, which have free-for-all rings similar to the arenas found in the original EverQuest in towns like Qeynos. Even with these features, Dungeons & Dragons Online is not a PvP game, but having some competitive options never hurts.