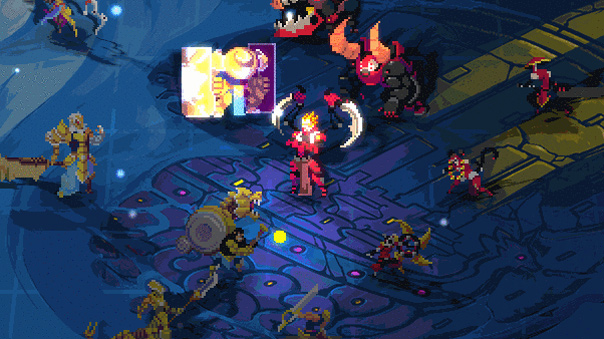 Recently I had the pleasure of sitting down with Keith Lee, the mastermind behind the now funded Duelyst campaign on Kickstarter. Duelyst, for the uninitiated, is a vivid, turn-based strategy game built in the image of golden-age classics like Final Fantasy Tactics, Fire Emblem, and Suikoden. The nostalgia may be strong for some with those titles – for others, they might mean nothing. Whatever your familiarity with the history of turn-based strategy in gaming, I can assure you that the Duelyst’s design is drawn from a fine pedigree.

One of the first things I noticed when talking to Keith was how professional and cordial he was. This is something I value in people, and over the course of our conversation I came to understand that he was leading the development of Diablo 3 back in the ancient era of 2006, when the game was still very young and Blizzard North still existed. Upon Blizzard’s consolidation of that satellite studio, Keith left the company and worked on mobile games for years. It wasn’t until recently, with the founding of a new company in the bay area and the development of Duelyst, that he’s begun a serious foray back into the realm of AAA titles.

His intentions are to bring players a high-quality multiplayer experience, with smooth matchmaking services built into the platform. What sets Duelyst apart from games of its kind is that Duelyst is not yet another soulless digital trading card game – it’s made in the image of story-driven strategy RPGs, and hosts a rich setting crafted by a diverse, cosmopolitan team of developers. It has vivid art direction (that teal and magenta title on the kickstarter page is hard to miss), and the game’s art director is actually a native of Brazil. If there’s one nation that knows color and spectacle, it’s Brazil.

The two-dimensional art direction may seem like a step backwards to some, but the decision to stick with high-quality, two-dimensional sprite art was just as much an artistic decision as it was a logistical one. Sprite art frees the creative team from the restraints of rigging and animation 3D models, some of which can become incredibly complex when designing exotic and fantastic creatures and units. The fields of Duelyst are ripe with a variety of unique beasts and soldiers, with three factions that are more than just alternate color schemes. They look positively alien to one another.

Gameplay takes place on a square, flat grid. There are no varying elevations or complex maps in terms of terrain, though there are various zones and tile bonuses on the map in order to reward tactical positioning. The decision to avoid elevation variation was primarily made so that the game could stick to its “thirty minute session” vision when it comes to multiplayer matches. This is a game designed to be all-terrain and accessible from the ground-up, with a range of platform compatibility – Mac/PC/Linux/Browser – and an out-of-the-box endorsement to sneak in sessions during downtime at work. A moving mind is a working mind!

For players that prefer to hone their form alone, there is a method of setting up virtual sessions in a limited single-player mode, allowing the player to unlock units and perfect their strategy without the pressure of ladders or competition – did I mention the game uses a ladder system? Ranking, rewards, and prestige await the most dedicated and skilled players, so there will be plenty of incentive to put time and thought into your playing of the game with your favorite faction and unit builds. The game is a fine balance of old-school mechanics and modern multiplayer.

What really sets the Kickstarter efforts of Duelyst apart from others is that the development team behind the game has designed a widget that allows backers to use the new “Dogecoin” for contributions. For the uninitiated, dogecoin is an alternative to bitcoin that was made only very recently, but is rapidly gaining in popularity as a digital currency – the name stems from the “Doge” meme. Wow. Such innovation. Very currency.

Duelyst is shaping up to be an interesting ride. It’s already reached the initial goals of development funding via kickstarter, but meeting stretch goals will allow them to expand upon the game’s single-player campaign and storytelling – something they fully intend to visit in the future, sooner rather than later, if it can be helped. As someone who loved the story-driven tactical RPGs of yesteryear, I just might be contributing a bit of cash myself to the project.

If you value tightly designed, fleshed-out strategy games with solid multiplayer, and would be happy to support the efforts of an experienced, storied team of industry veterans in the face of expanding corporate clone-games, then I would encourage you to give Duelyst’s kickstarter page a look. A game with a clear vision and responsible creators is rarer than you’d think, these days.