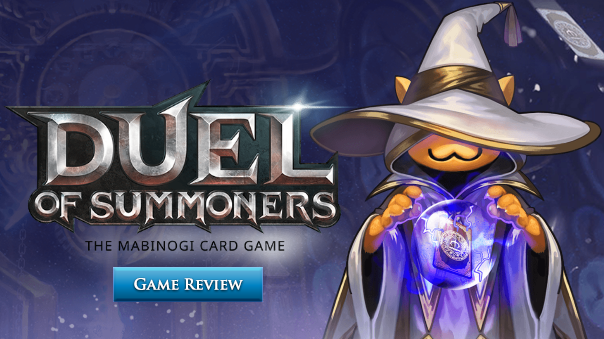 I never really got into Mabinogi, but I am a sucker for a fun card game. Duel of Summoners without a doubt fits that bill. Overall, it’s a fairly standard “bring your opponent to 0 life” CCG, but some of the mechanics are incredibly clunky. You have a series of five colors, each with their own type of summoning resource, essentially various colors of mana. The only resource that really felt different was Red, which uses Gold. There are deck Heroes, but they are not strongly affiliated with any deck type or color. There are some that go better with decktypes, I’m certain. For example, I use Xexenoa, the evil witch, but I used her in a mono-red deck and in a blue-red deck. Some of the Hero cards have abilities and traits that can help or hinder you, and some do nothing. These powers are not game breaking, but some can work against you at a critical moment. Sarah’s “Moodiness” for example, has a 20% chance to give 1 hp to a Hero that charged resources, which can give your opponent that 1 hp they need to stay alive. I’ve almost killed myself with Xexenoa before I realized her power negatively affected me as well. Her power is “-4 HP whenever someone uses Revive, +1 HP for each creature that goes into a graveyard”. The HP bonus only goes to me, at least.

You pick a Deck Avatar/Hero, and then craft a deck. You can choose to have the game “auto-build” a deck for you, but I highly advise against it. It might give you some ideas for a deck, but I feel like the three-color decks it tends to craft are risky and slow. Your deck is 12 cards in size, which is the smallest deck I’ve ever used in an online card game. You start with your deck in hand, which takes most of the randomness out of the game. You can use the Revive option to draw from your graveyard back into your hand, but it’s risky with Xexenoa as your Hero. Each turn you gain resources at random (except in a mono-colored deck) and can perform one action. As you perform actions, you gain exp (in the little green circle) and eventually, you’ll be able to level up (to a maximum of level three). It increases the power and cost of all your cards, lets you perform an additional action, and gives you some resources. I think it’s a cool system, but it’s incredibly clunky. When you level up, it takes your action for that turn, and if you’re behind you might not want to waste the time leveling up even if you need it for the action or resources. 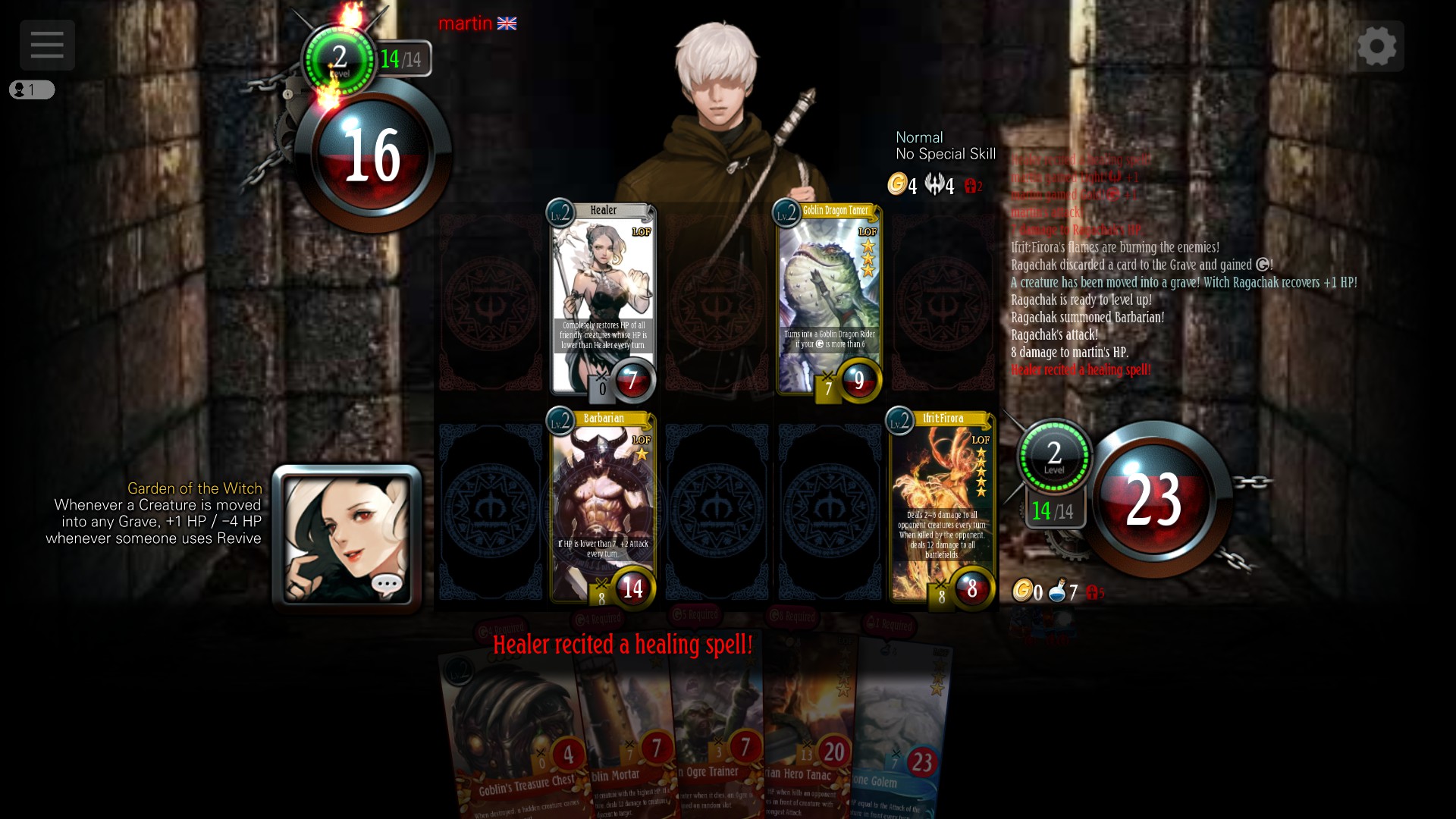 Be mindful both of resources, and card placement. Everything matters.

You gain resources each turn and when you level up. If you have no cards to play or can’t afford a card, you can “charge”, which gives you a point of resource at random. The more types of cards you have, the harder it is to get that resource. However, at the start of your turn, you gain 1 resource per color in your deck. So if you’re running 3 colors you will receive 1 for each of those colors. That’s fine, and actually helps multi-colored decks, but the “charging” of resources is random and almost never seemed to be helpful in my experience. That’s down to RNG though, so take it with a grain of salt. You can use up to three types of resource per deck, and there are some incredible combos you can make with multi-colored decks. Each color, of course, has a theme, and a set of spells/creatures affiliated with it.

You’re bound to find things that work well together, and there are cards that grant certain resources every turn or give you bonus resources of another color simply by playing them. The ones that generate per turn have to be on the field and can be attacked if a creature is in that lane. There are definitely benefits to playing a multi-colored deck, but as far as RNG went, it was pretty slow for me. I’ve seen a lot of 3 colored decks that are incredibly successful, however. The fact that you always know what cards you have at your disposal really helps with devising a strategy and preparing for what your opponent can do, and you can always bring cards back with Revive.

Let’s briefly go over card types. There are Creatures and Spells. Creatures are either going to be regular generic cards, or Powerful Creatures, which are similar to Legendaries in other games. They have names and much more powerful abilities. Spells come in a variety of flavors. They can hit 1 enemy, all enemies, all creatures, all of your creatures. They can grant resources, target heroes, and affect the game in other ways. Some creatures will have Armor also, which has to go down before you can touch their life points. 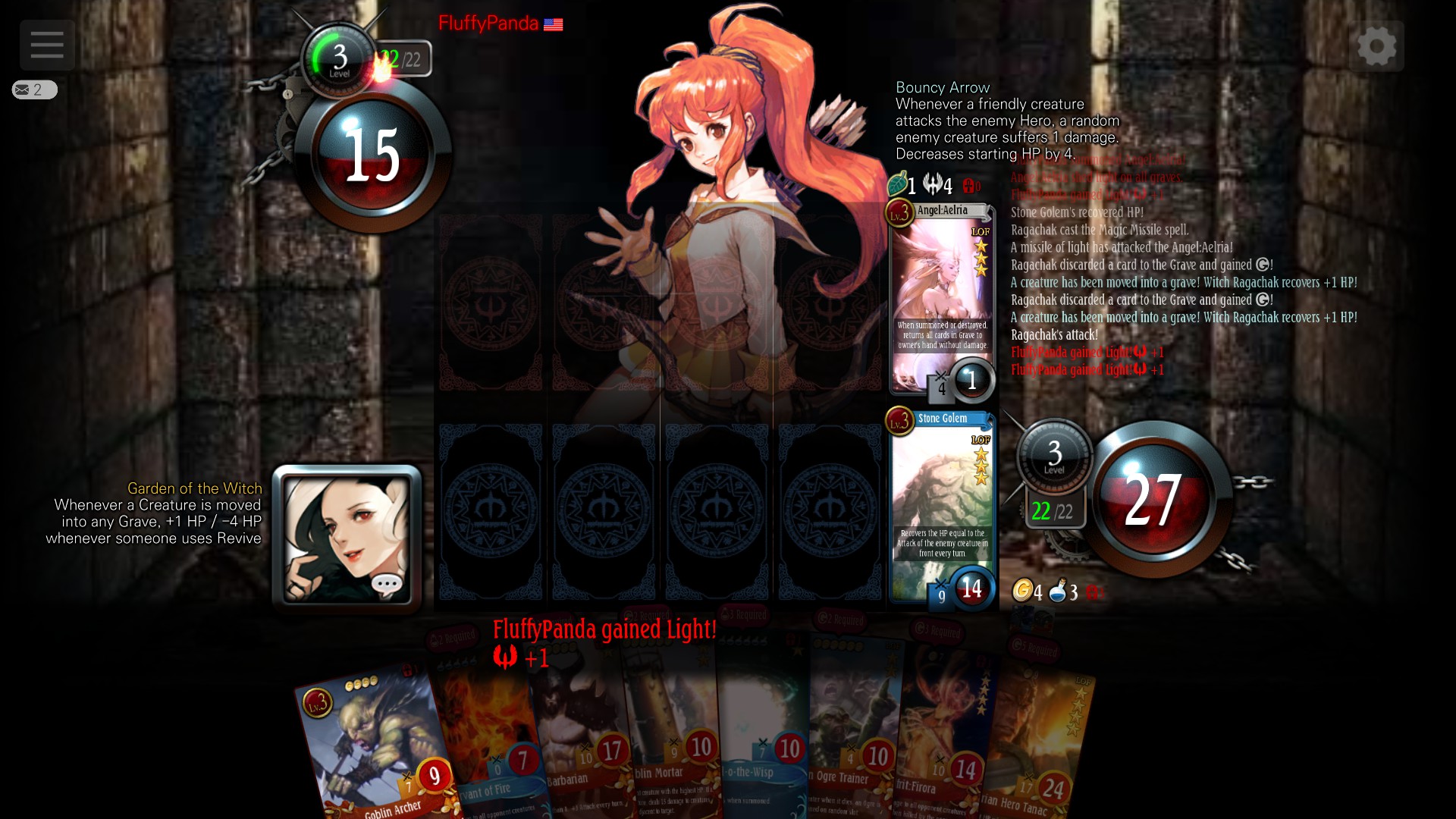 There are definite pros and cons for every deck type.

You have five lanes, and when you play a creature/card onto the table, it goes to one of these slots of your choice. Creatures do not attack the turn they come into play. You gain your resources for the turn, choose to play a creature, charge a resource at random, or revive, and then if you have creatures already on the field, they attack. Remember, leveling up takes that turn’s action (when you have the ability to do so). Also, unlike many games, creatures do not fight back! When it’s your turn and you attack that lane, the other creature does not hit back. If there’s no enemy in that lane, you attack the Hero’s life points directly.

There are some creatures who have special powers like “Attack lowest health creature” no matter the lane, or “Attack Creature with the highest health”, and those who can ignore armor, deal damage to whole rows, et cetera.  As you level up, your cards grow in power and cost. This wound up being a drawback for most of my mono-colored decks. I’d spend turns just charging resources because I couldn’t do anything else. You can discard cards from your hand for resources, so you have to consider carefully what you have to play next turn. The idea of discarding for resources feels practically required in multi-colored decks. If you “charge”, you have an up to 33% chance to find the color you need. Discarding is 100%. This mitigates RNG, which is a godsend. It’s important to the strategy of many decks, so don’t be afraid to if you’re in peril. 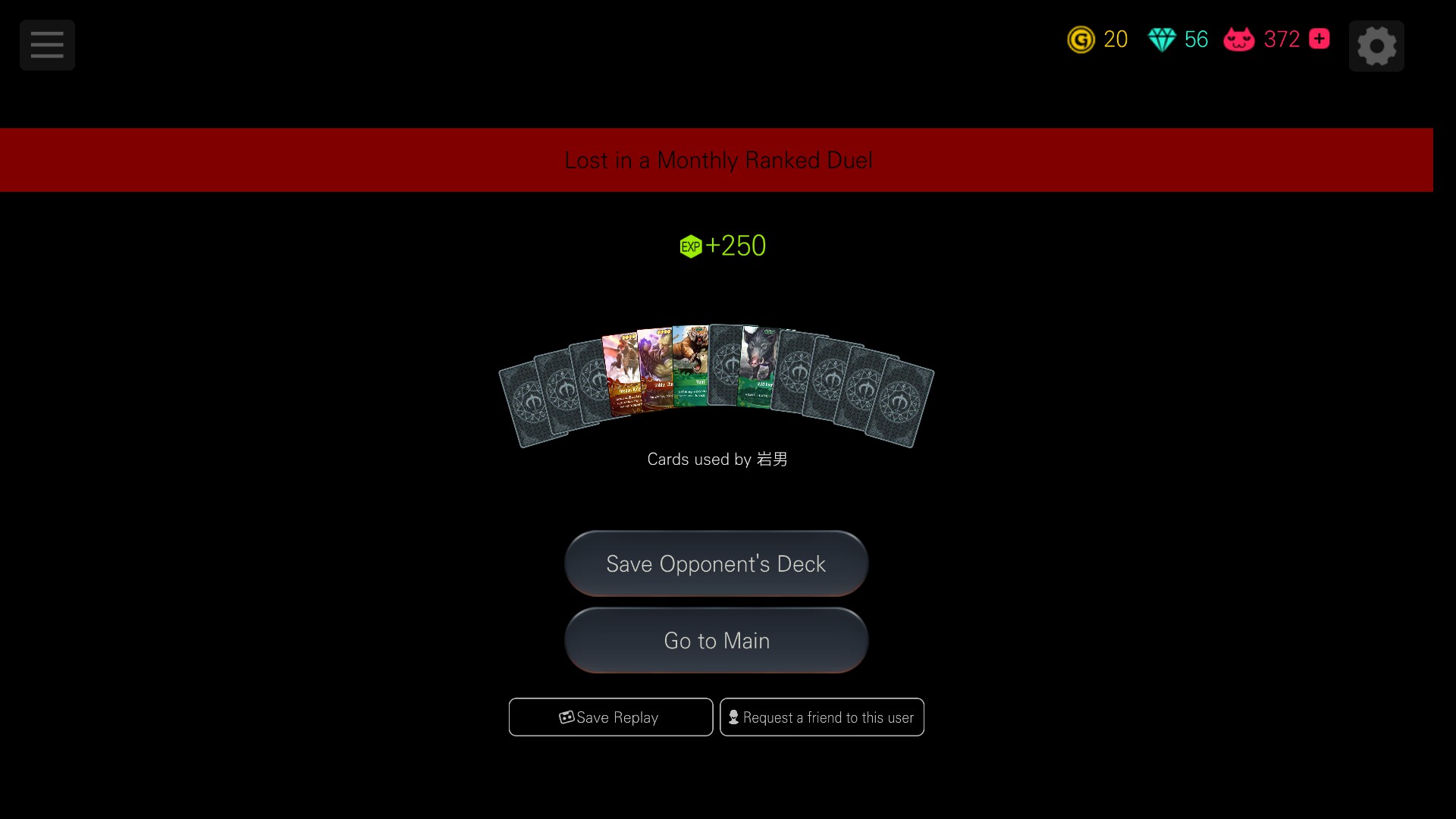 Even in defeat, you learn. You can save your opponents deck to try for yourself.

There are piles of game modes, too. You have the main story mode, which is pretty easy and is worth doing to level up your account, unlock rewards, and experience the story of the game, which is pretty entertaining. You have daily missions you can perform for rewards, and then there are the duels. You can play a standard duel against other players or NPCs (using the Cat Merchant to randomly create a deck/clone a deck), Draft Arena, the Weekly Limited Arena (certain rules every week, for example only Nature and Mana cards. Can’t use a card more than once), Monthly Ranked (Ranked Duels, rewards at the start of the month based on your standing), Event Arena (Do battle for special rewards) and Weekend Special Duels (real-time duels against other players. Silver and below get points even if they lose). It’s also very important to make friends! Befriend everyone you can until your friend cap is maxed. That way you can get/receive gifts from them, see their card shop (they might have something you want!) and to have friends to do battle with/learn from. I found it very beneficial to make friends, and even people who were under rank 10 (which is significantly higher than me) still befriended me. This also helps you complete Beginner Quests, which is helpful. 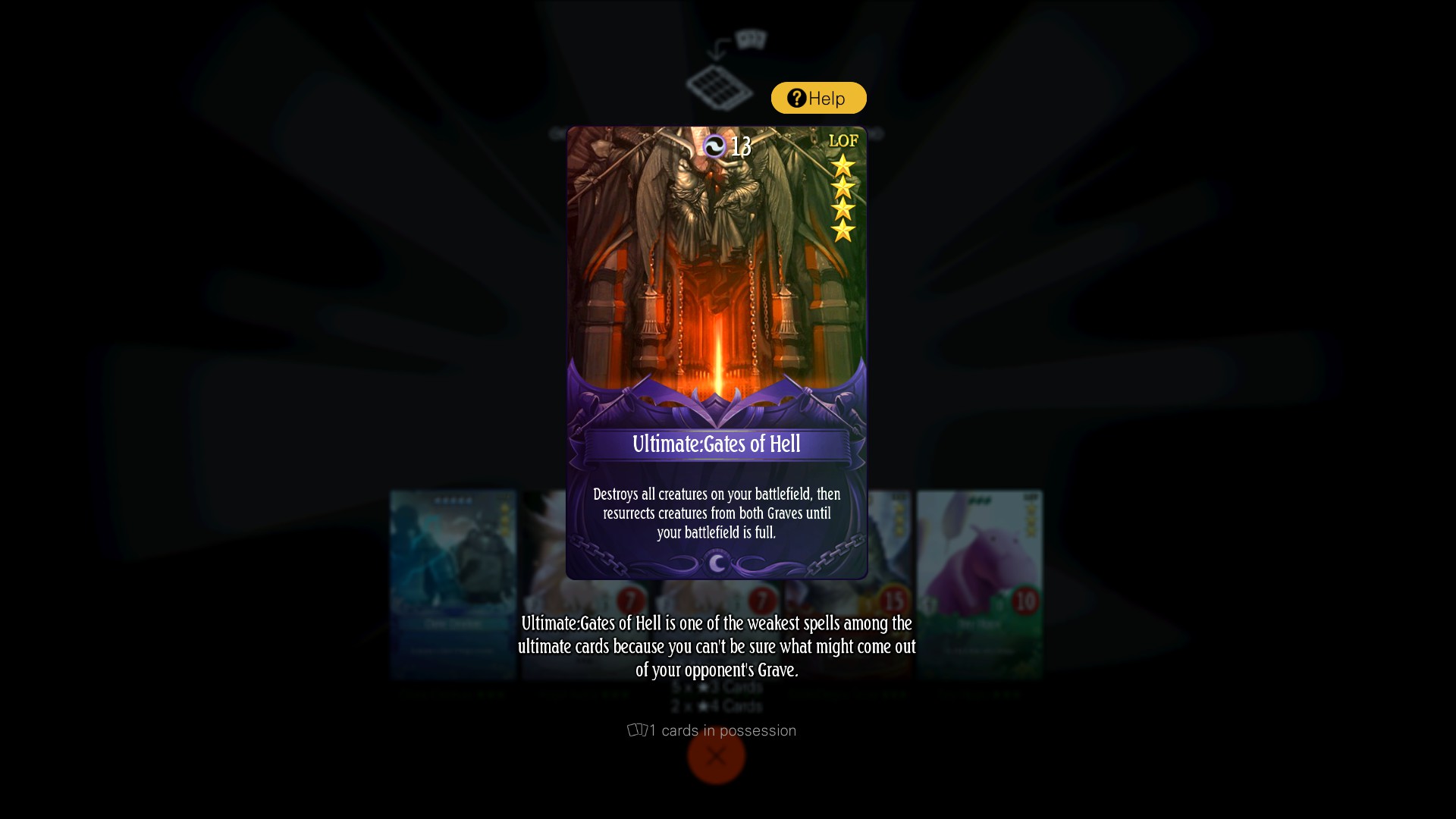 There are few, if any bad cards. Everything has a use.

The booster packs felt pretty reasonably priced to me at 30 gems. There’s also a shop for Hero skins, which aren’t necessary but are definitely cool. There’s also the Cat Shop, where you can spend Gold to buy cards you need for your deck. If you have piles of extra cards/duplicates, you can sell them at the Card Exchange Post, and there’s also a Personal Shop Board to buy cards from players. Speaking of the Cat Merchant, occasionally he’ll show up and offer a trade to you. He’ll ask for some of your cards in exchange for his. You can get advice from the game (which bases it solely on the gold price of the cards, not their actual usefulness/power for you). You can see how many copies of an incoming card you have by clicking the card itself. You can agree, try to haggle for more, or send him away for the day. I like this idea, but while the deals were solid, they didn’t appeal to me because it was seldom something I actively wanted. 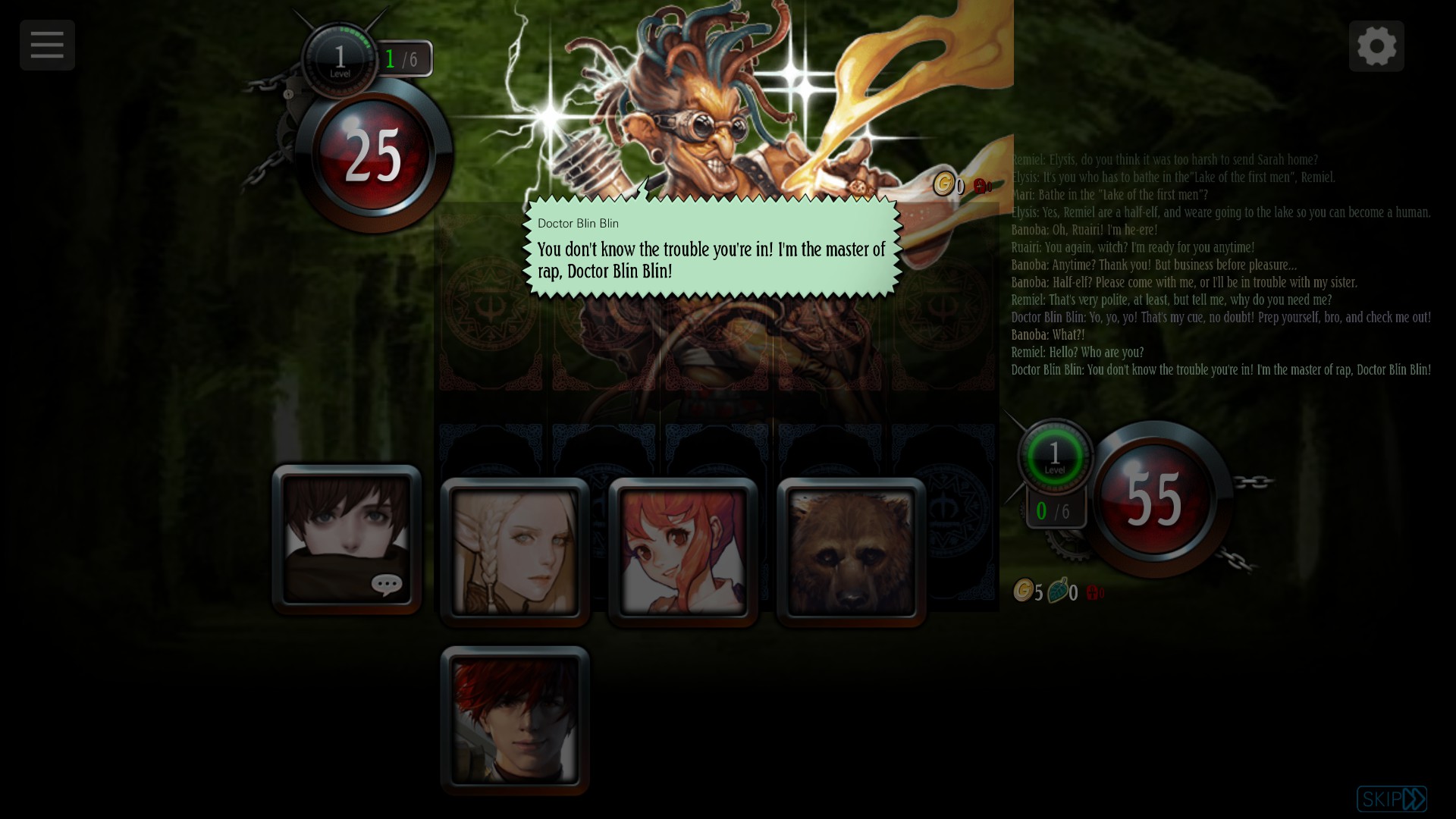 I have to say, the writing is very lively! The story and characters are all interesting.

I genuinely enjoy this card game. It’s different from other CCG’s I’ve played, and while it has some RNG (only in card packs/resources in matches), you can mitigate some of it, and the cards are definitely awesome. I do feel like the mana curve for these decks is pretty high, with lots of cards that start high cost and just get higher as you increase the level cap. I enjoy that you have access to your entire deck at the start though, so you can really do some incredible things early in the game if you build right. There are some incredibly insane decks out there. You gain rewards for winning, by spinning a wheel and can even save an opponent’s deck, if you have the same cards available. See something insane you want to use, or modify for your own uses? Then you can do that! This is an excellent port from mobile to PC, and there are merits for every deck type/way to play. So far the game is balanced and fun to play, there are plenty of modes and there are so many decks to try. The duels don’t take long, and as there’s one global server, you’ll always have an opponent. Since it’s a card game you don’t have to worry so much about your opponent lagging or anything like that. I highly recommend giving this card game a shot. Even if you don’t know a thing about Mabinogi, you’ll learn some in the story, and the card game powers/traits are universal.
Official Site
#duelofsummoners #mabinogi #ccg #review