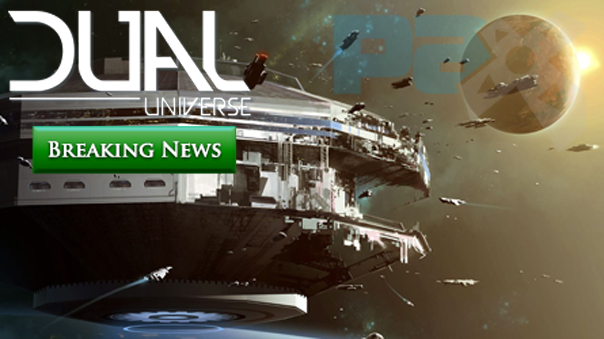 Imagine a hypothetical MMORPG where the developers just pushed every element of emergent gameplay to the limits. Beyond anything you imagined could realistically be included in a game. Let’s go Sci-Fi setting so the sky isn’t the limit. Dynamic skill use based progression that lets players train a set skill amongst a myriad of skills on a single character whether offline or online. A world with sandbox elements and fully constructible cities and heck, cities in space while we’re at it. Cities you could literally fly, like the Death Star. And on scales comparable to the Death Star, with hundreds of players working together to operate its endless weapons and systems. Ooo action combat is a must too. Oh sure why not throw in some politics for good measure, with safety zones and open world PvP built off of player created factions. Let’s see… are we missing anything? Ah yes, draw distances that let you literally see planets beyond your planet’s hemisphere that actually exist in the universe and can be flown to. Ah wait one more idea. What if when you get to that planet there is alien lifeforms you can discover. 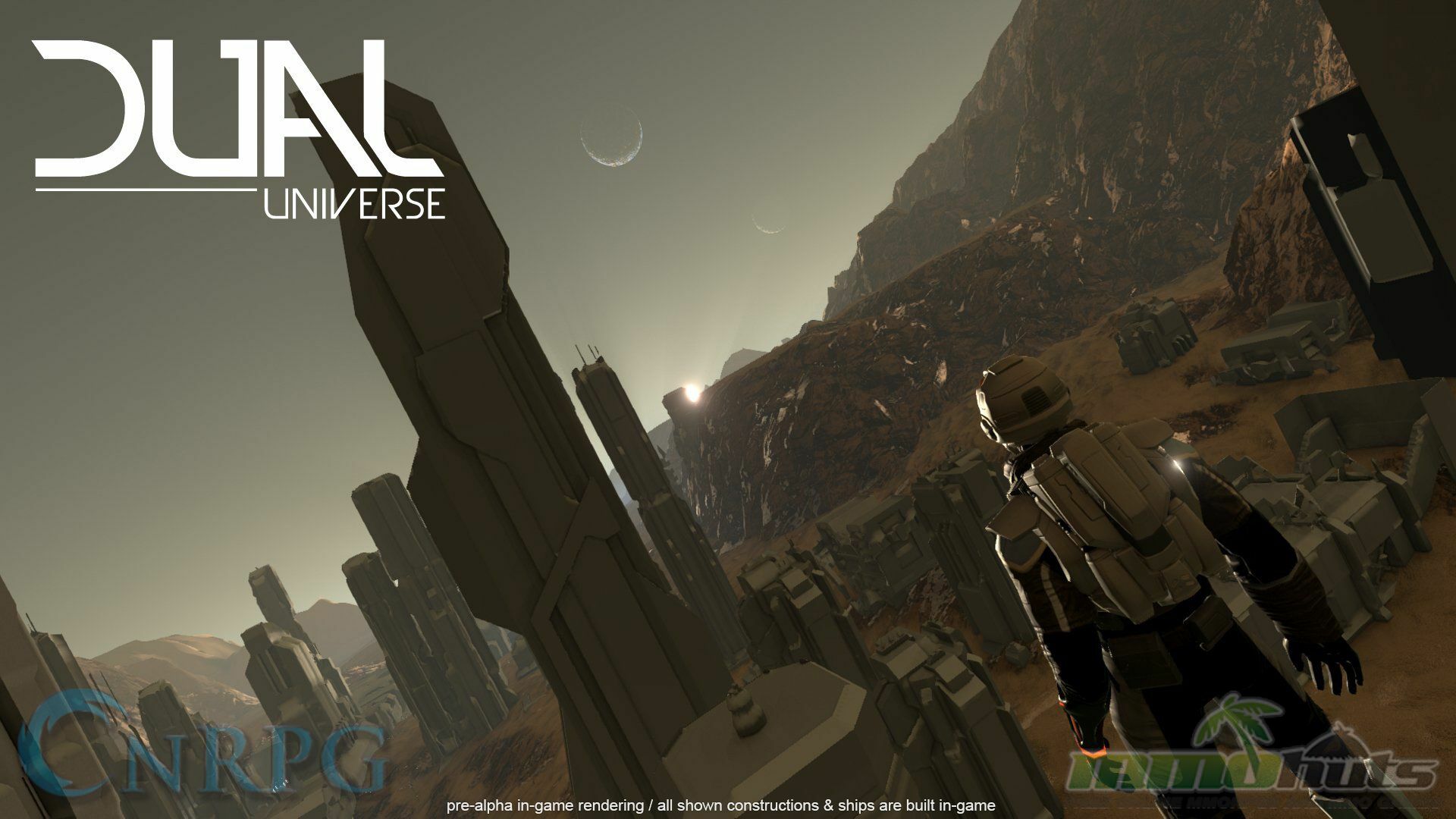 Entire cities built by the players, for use by other players.

That’s some real fantasy concepts piled together, don’t you think? I’m pretty skeptical we’d see anything like this in the next decade with how MMORPGs are going. Oh but I’m a doubter. Clearly Novaquark and the 1300 backers and growing on Kickstarter are ready to make this fantastical super game a reality. You know what’s really wild though? I’ve seen this game in action already. It’s Dual Universe. Let me show you.

It wasn’t five minutes into the demo that I felt I was being bamboozled by some sort of pre-rendered tech demo. But there was just enough glitches and unchoreographed moments to make it all believable. Too much seemed unreal. The planet was believable enough… until he flew into space and turned around. The world I saw before me was large enough to be one of the largest MMORPGs of all time. But that was all it was. Just one world! As he turned into space, countless other dots stood vigilant amidst the stars. I challenged him to show me these dots weren’t just a pretty wallpaper of a solar system. So he did. 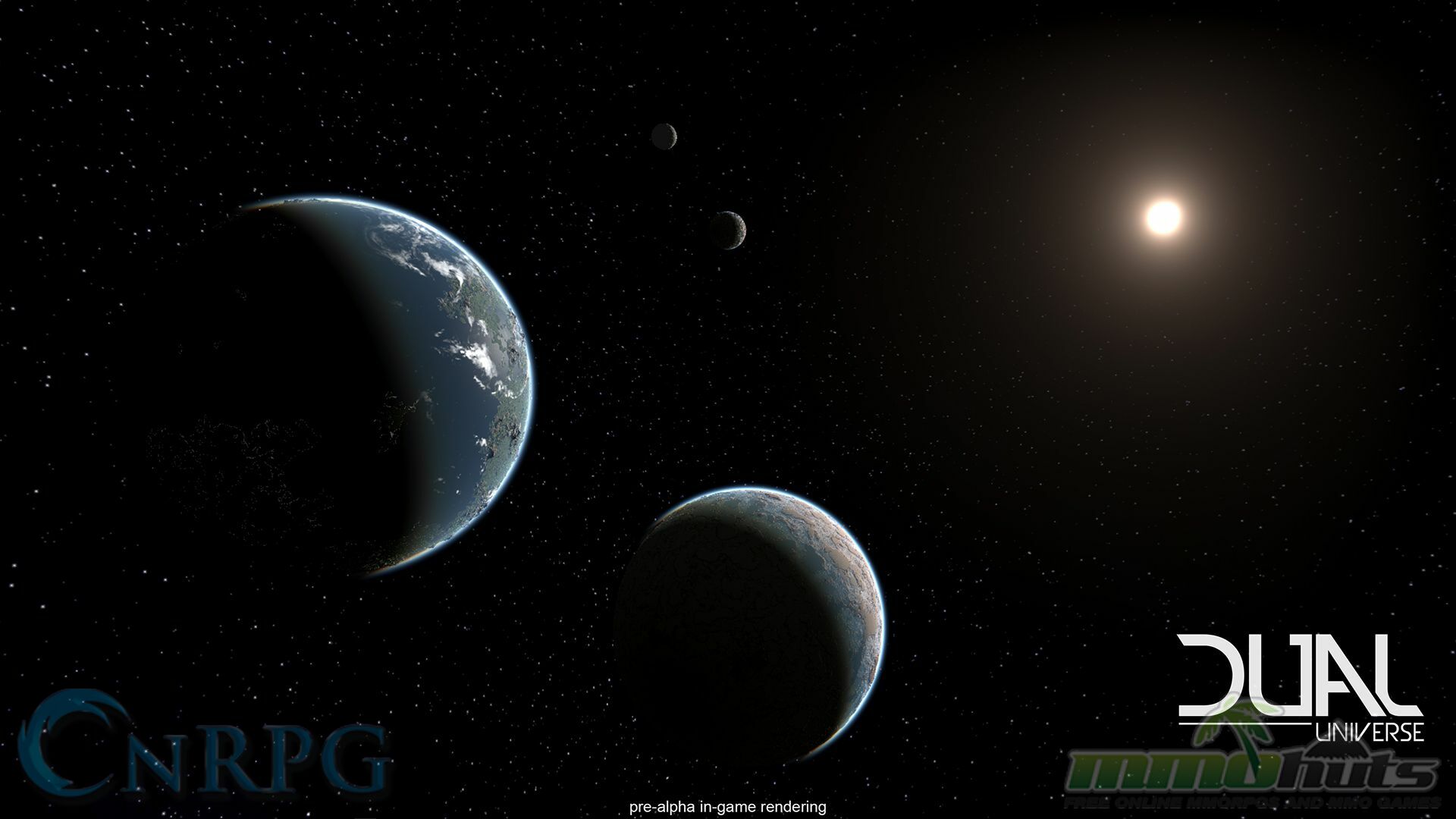 With the help of GM powers (as the distances were quite vast) we rocketed through space at blazing speed to a dark toxic world. Then a world filled with massive Redwood-esque trees. Then a rogue moon work in progress with some rough but still great by placeholder standards textures demonstrating it had been pummeled by asteroids due to a lack of atmosphere. Even the moon was huge, but every world was a fully believable to scale planet. Each seemed entirely different, and my mind immediately went to work imagining the interplanetary player driven economics that could result from various guilds running mining operations between them. But two thoughts limited the realism for me there. 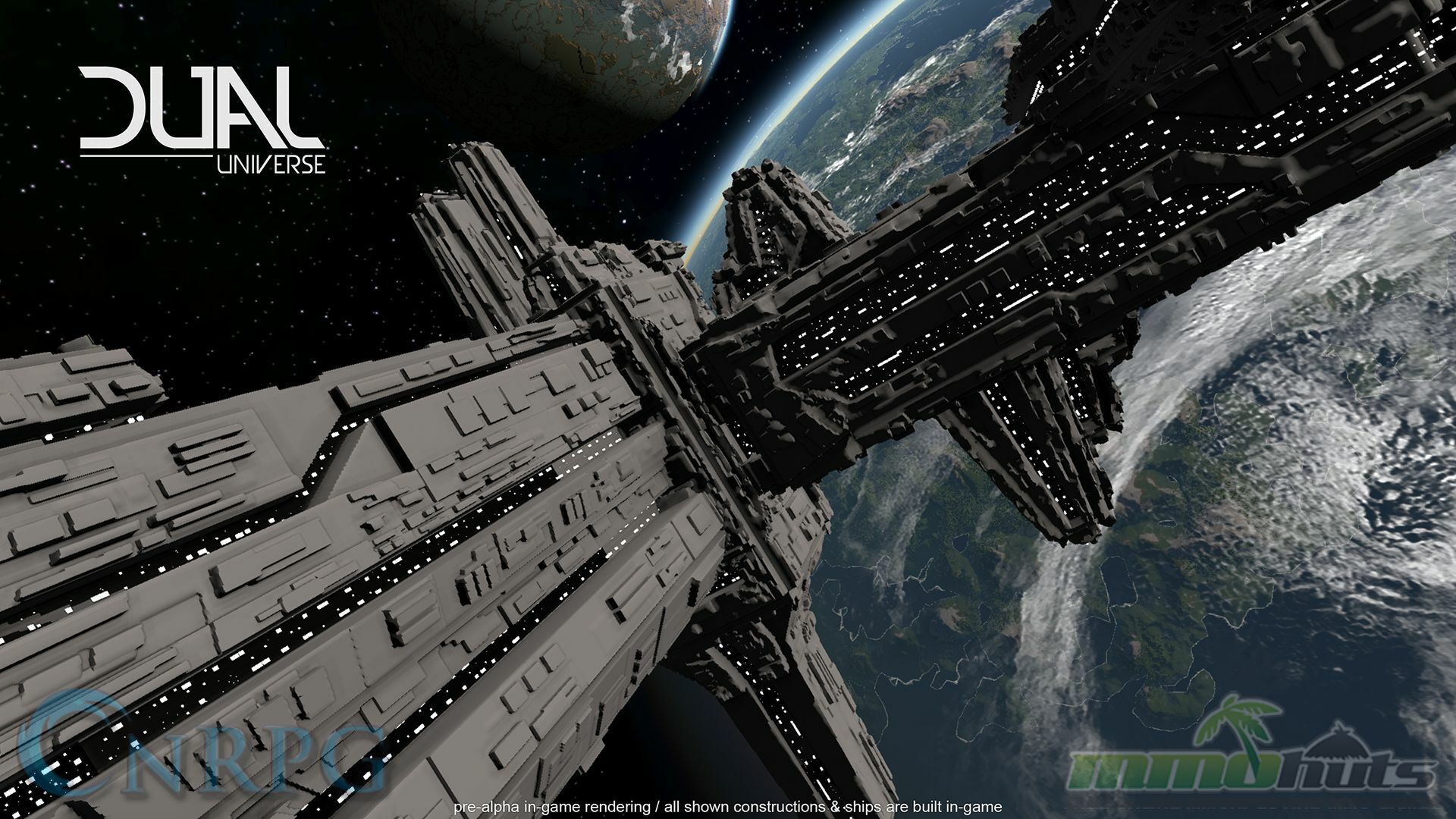 There is just no way that thing is a real space ship.

You and what army?

With worlds this large, and this many planets, I had to wonder how a player driven economy could even work. Even with a ridiculous estimate of the inventory carry capacity a player might have, given the populations expected in the major cities it just didn’t seem like a feasible business model for a player driven economy. At least… not without properly functional mega cruisers to transport players and trading goods between worlds. But at such a size, they would be huge targets for PvP players looking to make a quick buck in this open world PvP environment. Finally, could a game already responsible for running such a massive player edited solar system even handle the stress of processing all this? Again, nothing seemed possible given my knowledge of game design and existing tech. 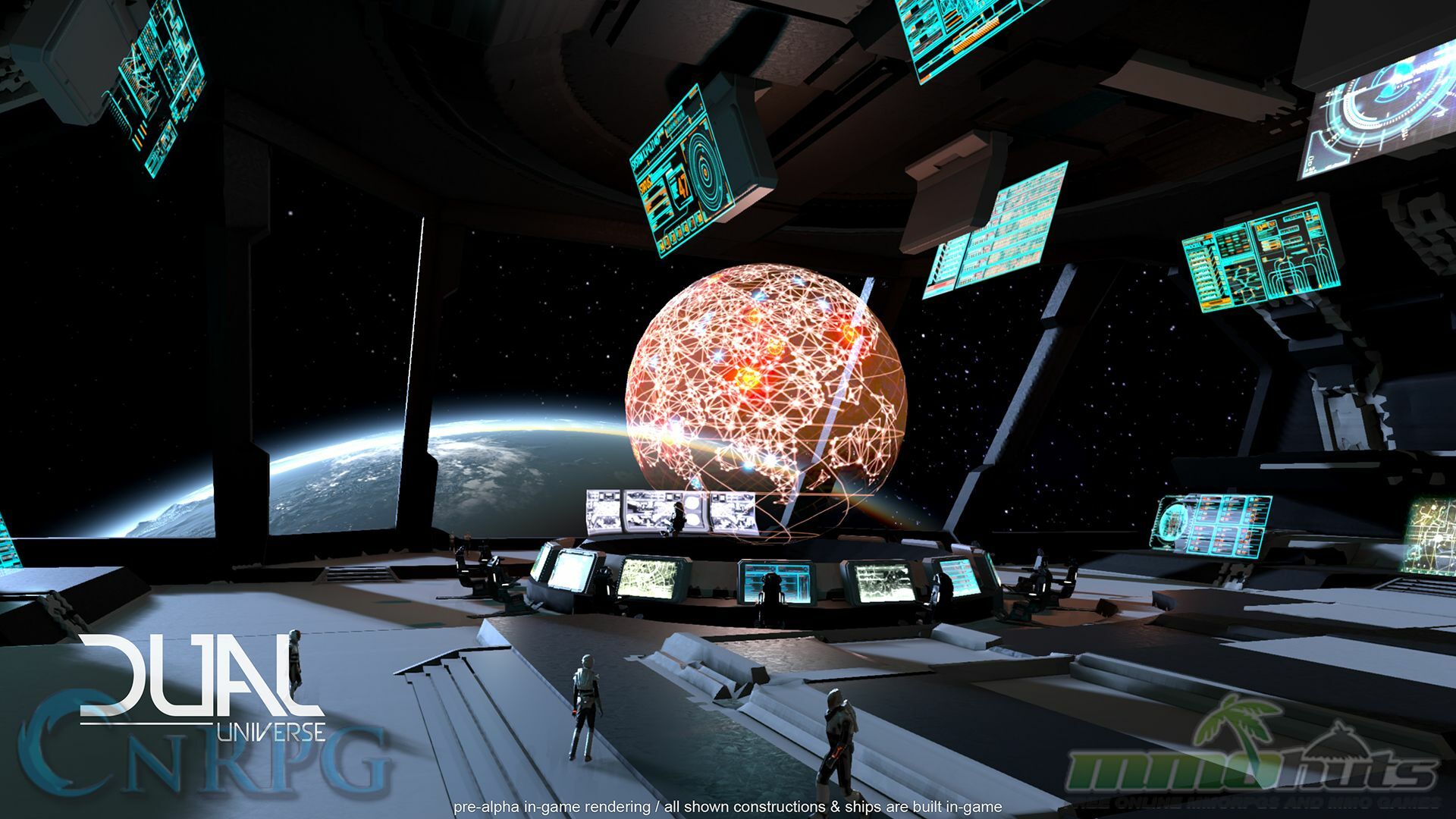 All right fine, it's a real space ship.

My first concern was answered all right, with a resounding metaphorical exclamation mark in-fact, as Mr. Baillie flew us into sub-orbit of the starting planet to approach a space station that nearly rivaled the rogue moon in size. Clearly by some of the wonky design points, this was a player created construction of epic scale. But I imagined it was nothing more than a pretty space monument given its size. After some fiddling around and GM code marking, at least Baillie found one of the exterior doors to enter the craft. Utilizing pre-rendered parts used to make crafting in the game not a complete living hell for the less Minecraft obsessed players out there, the beautiful hallway stretched on for what I’d compare to at least the length of a football field. Side routes branched out in all directions, leading to gunner positions, storage holds, ports for smaller gunships and supply ships to dock, and finally a command deck room.

The command deck room was explained to be the central controlling seat for piloting this gargantuan structure around the universe. Though it wasn’t clearly explained how, it was implied from the commander seat you could send instructions to crewmembers throughout the ship to ensure everyone was on the same page, given pirates or rival factions show up and push goes to shove. Still I was baffled. Could the game process the seemingly hundreds of players required to operate a ship like this in such a tiny location of the game world without becoming a slideshow of stutter frames? 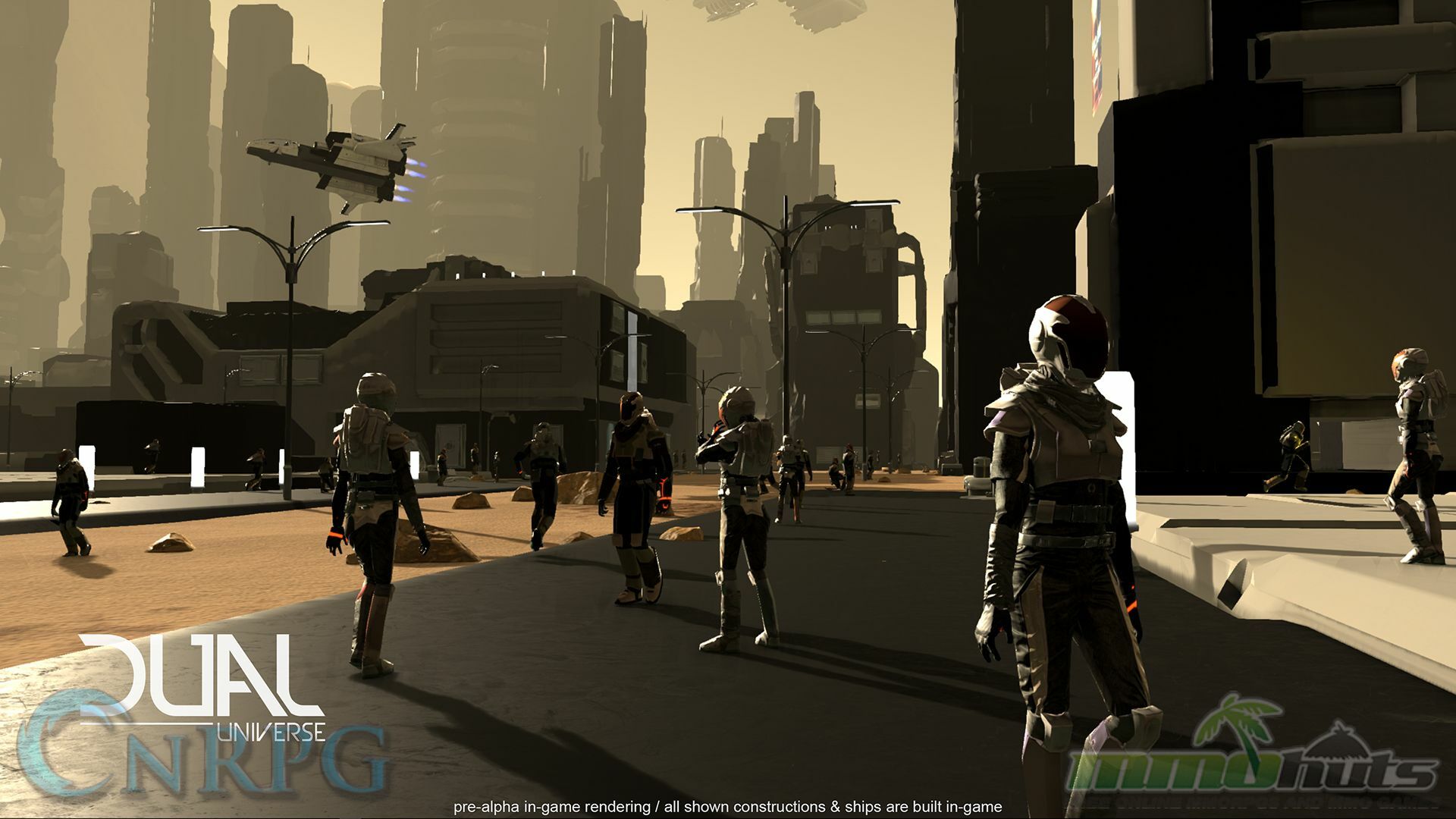 Utopia is a free market player built city with no fps drop.

While I’ll spare you the incredibly detailed answer to this question, as it’s a technical marvel that will likely be lectured about in the gaming industry for some time to come, here’s the short of it. Dual Universe operates on a smart system of servers that rapidly identifies player movement and diverts processing power to locations of heavy player population while slacking on the regions of the server without population. Sure we’ve seen systems like this, especially with the rise of on-demand server tech like Amazon offers. But on the scale Dual Universe is attempting? Not even close! Now I will take a wait and see stance on if it’s going to work because naturally there weren’t hundreds of players actively running around on this ship. But it’s not all fluff. I’ve seen the tech demos with bots replicating players, and they’re doing things at least on par with the marvels in Camelot Unchained, a game touting 300+ player siege battles with almost no noticeable frame rate drop. So there is clearly some backing behind their claims.

As a simple tech demo sandbox world, what Dual Universe is offering would be monumental. Here’s where I get excited and a bit concerned though. They want to push a massively open skill building system as well, fully customizable ships that are a mix of functional parts and player crafted connecting parts, a massive political system connecting guilds and player economy together, and cram all these moving parts onto one super server where all players are united. 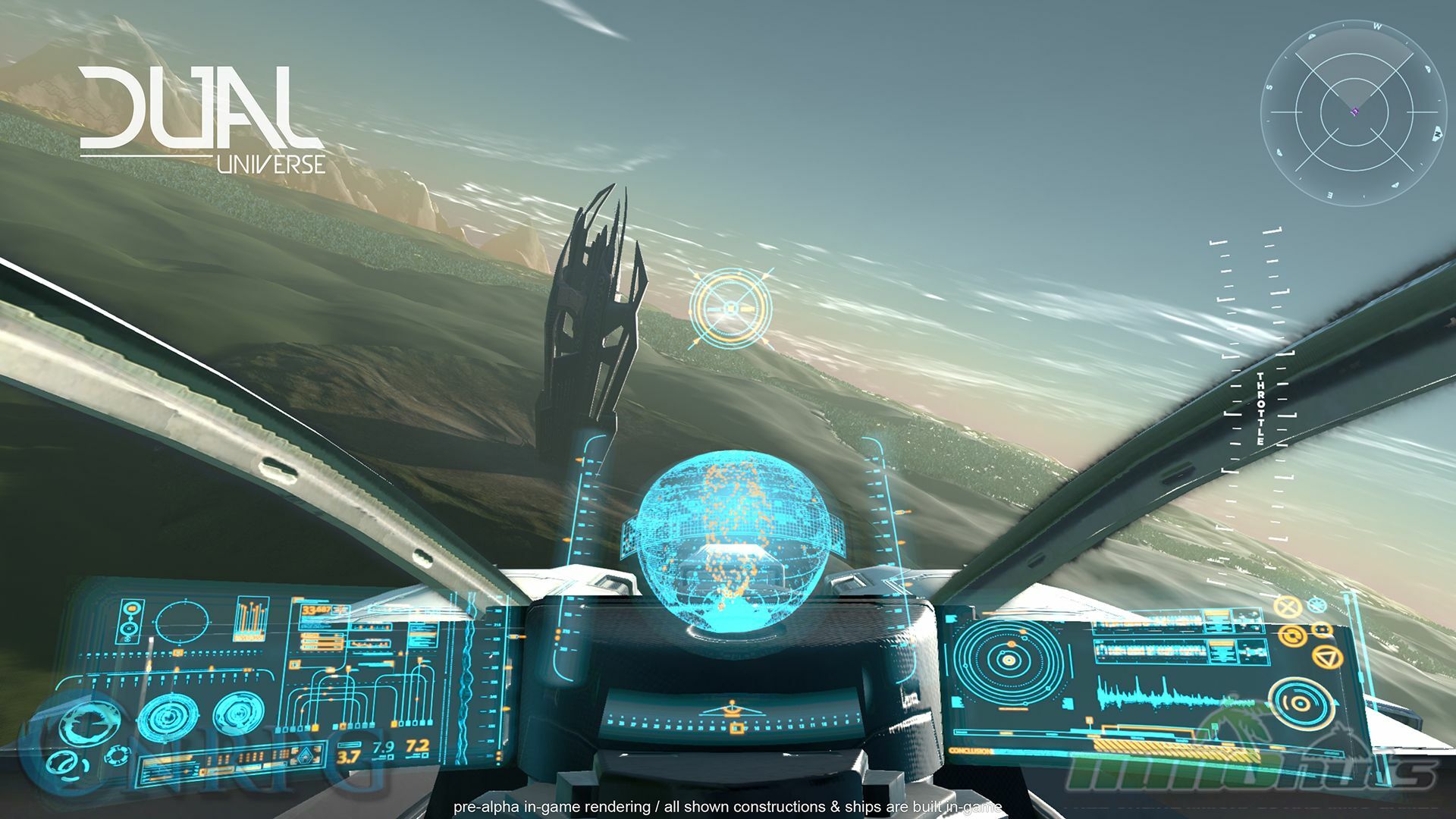 I hope they offer air traffic controller powers in this game, or that central city docking is going to get nasty!

Ambitious doesn’t even come close to describing this project. If not for the over the top mind-blowing tech demo I sat through at PAX, I’d call them mad. Perhaps they are. But that touch of madness and extreme dedication to a dream might be just what the scifi MMORPG scene needs right now. Nearly 2,000 backers on Kickstarter seem to think so after the first day of the campaign. Perhaps you think so to?

One thing that isn’t mad is that Baillie recognizes this monumental project is not something some 2 man indie group is going to accomplish. He has one hell of a team lined up and is pushing for at least $558k in funding on Kickstarter to deliver on the full promise of his dream. If you want to believe in this dream to, here’s the link. Best of luck to the team at Novaquark. A project like this succeeding is just what Kickstarter and the MMORPG genre need right now.