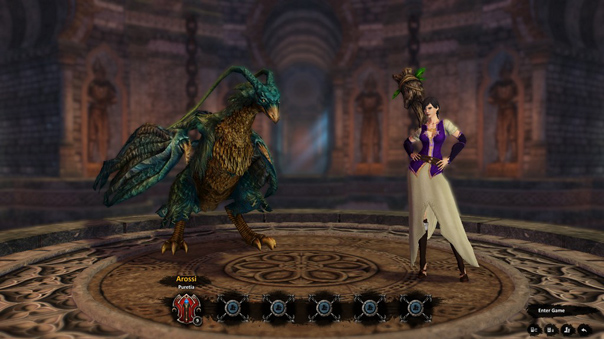 Who doesn’t love dragons? The staple of most fantasy, dragons encapsulate raw power, ageless wisdom, and unrivaled ferocity. As players, we fancy ourselves either as the greatest dragon slayers, or their staunchest allies. Dragon’s Prophet, from the creators of the popular Runes of Magic MMORPG, bring many of our fantasies to life, allowing us to battle, train, and even fly on a dragon of our very own. Dragons alone can’t make a game, however, so how does Dragon’s Prophet stay in flight when the allure of having your own dragon fades? 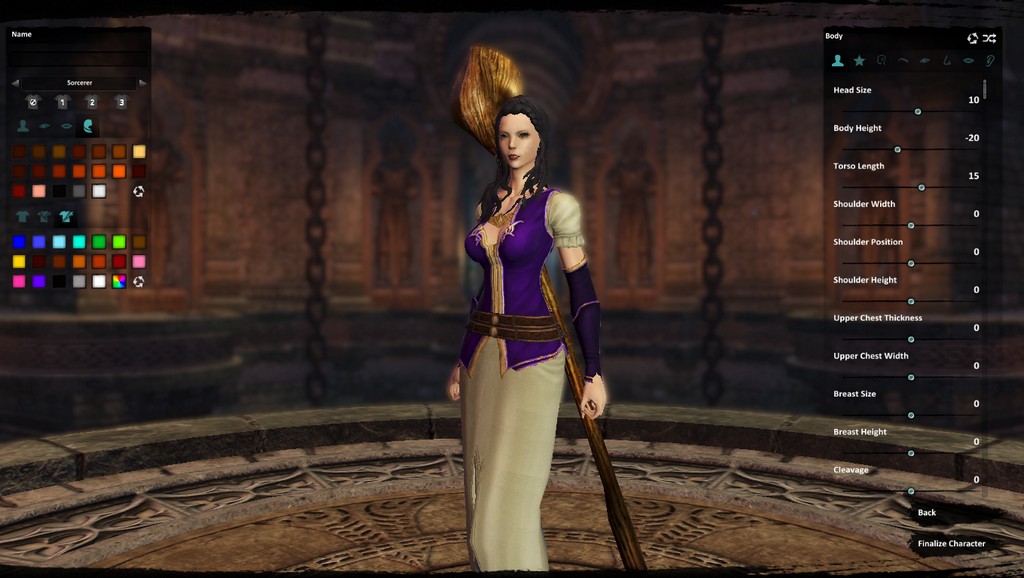 At first blow, character creation seems simple enough. Choose a male or female character, and then from the classes Guardian, Ranger, Oracle, or Sorcerer. The classes are fairly standard to the genre, with Guardians as the heavy melee class, Rangers favoring distance weapons like bows, Oracles functioning as a light melee class, and Sorcerers given the path of healing or magical DPS.

Customizing your character’s appearance, however, will leave your jaw a little slack, especially considering Dragon’s Prophet is a free-to-play game. The sometimes dreaded slider-based system makes an appearance to allow you to tweak your character extensively. While many games offer you a chance to change your height, Dragon’s Prophet also lets you adjust your torso size, arm and leg length, your musculature, your facial features, and even seemingly ridiculous options like the size and position of your buttocks. Amusingly, the one character feature that isn’t fully customizable is hair, as there are only a limited amount of preset options. Still, it’s almost impossible not to create a unique character in the world. 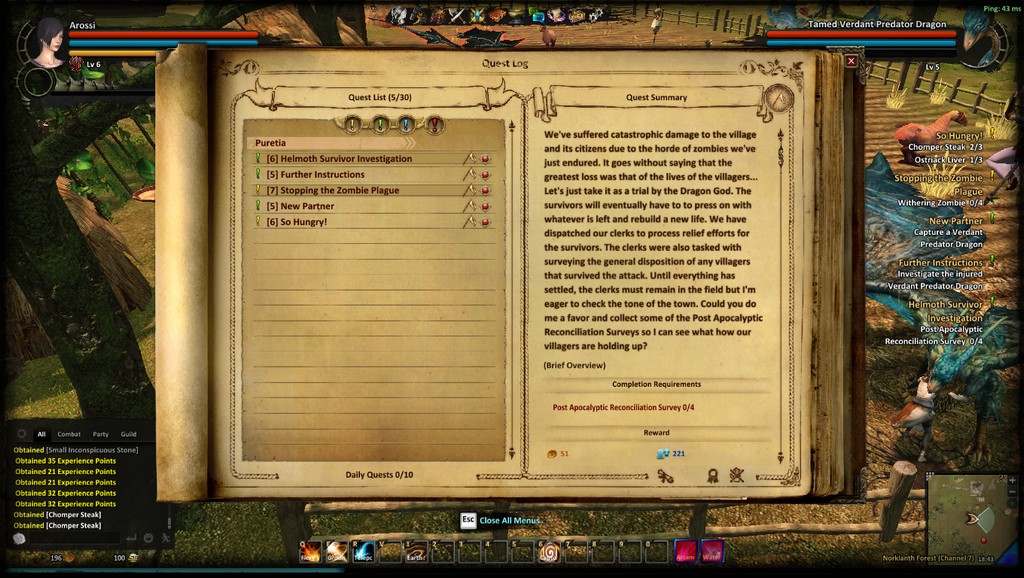 Dragons, How Do They Work?

The lack of innovation in questing is the most immediate gripe we have with Dragon’s Prophet. After a short tutorial that helps introduce basic commands like movement and attacking, you’re thrown into a vibrant world to kill the proverbial ten rats for the local townsfolk. In fact, one of the first quests you get is to kill poisoned chomper rats, while collect viscera from healthy ones. Another early quest has you play shepherd to very stubborn sheep in town. You’ll have to get used to the traditional style of questing here, too, because it makes up a good portion of the gameplay.

Luckily, though, salvation comes in the form of taming dragons. The game boasts several types of dragons to choose from: flying, ground, aquatic, and hybrids between these three types. You will be given your first taming task fairly early in the game. When you use your dragon taming skill, you’re thrown into a mini-game where you use WASD to keep an indicator in a designated area while the dragon tries to buck you off. If you’ve ever played Red Dead Redemption and done the horse breaking missions, you’ll be familiar with this bronco-busting experience. 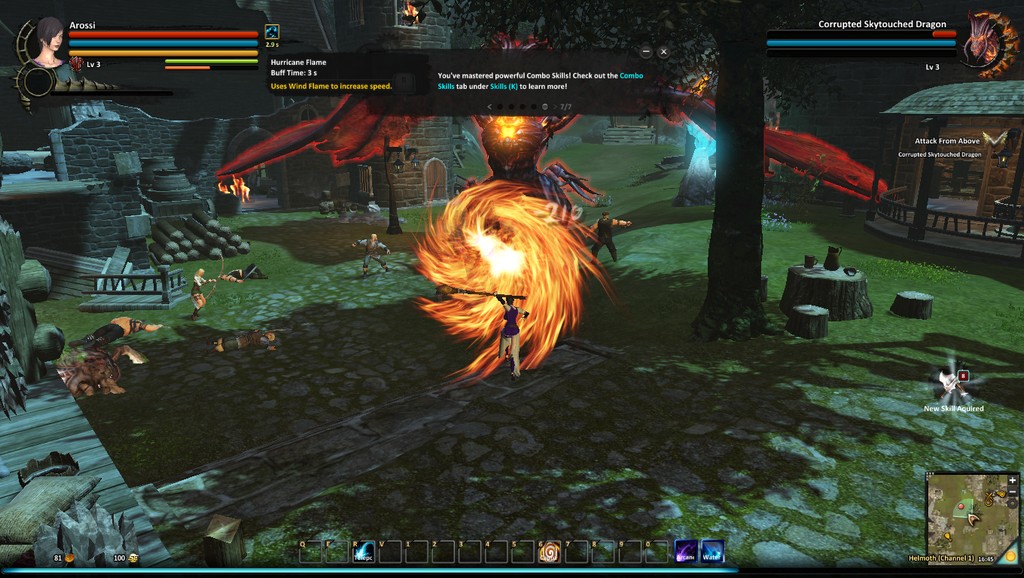 Despite the weakness of the questing system, combat in Dragon’s Prophet is incredibly engaging. At a cursory glance, it seems like a normal skill based system; however, your auto attacks are bound to the left and right mouse buttons, and these attacks can be chained into various combinations, a la Dynasty Warriors. It’s not just those auto attacks that can be chained, though. Most of your other skills also have of combinations to utilize. For example, a Sorcerer can use their Ground Fissure skill to knock enemies back, and follow up with a basic attack to do further damage to all of them. Most skills also synergize quite well: using the Sorcerer again, they can cast Fiery Dragon’s Breath to deal a good deal of damage and leave a damage field on the ground, and follow up with a Zero Dimension freeze chain to ensure the enemies take full damage.

Combat is not only combo-based, it’s action-oriented. While a Sorcerer may have to stand still to cast their spells, a Ranger, for example, can move while using their auto attack chain. All classes get an active dodge mechanic that can be used to avoid attacks, and this can also be used with some synergy to other attacks. Rangers, for example, can knock back enemies back with Griffin Rake, and immediately dodge backwards to give them plenty of breathing room to launch more damaging attacks.

You’re also able to use your dragon in combat, and choosing a dragon is as “simple” as selecting what skills complement your character best. A Ranger may find a dragon with tanking skills best, to keep enemies from getting close, while an Oracle may find something to help focus on damaging mobs. Dragons can also be trained, helping them learn new skills in the process. 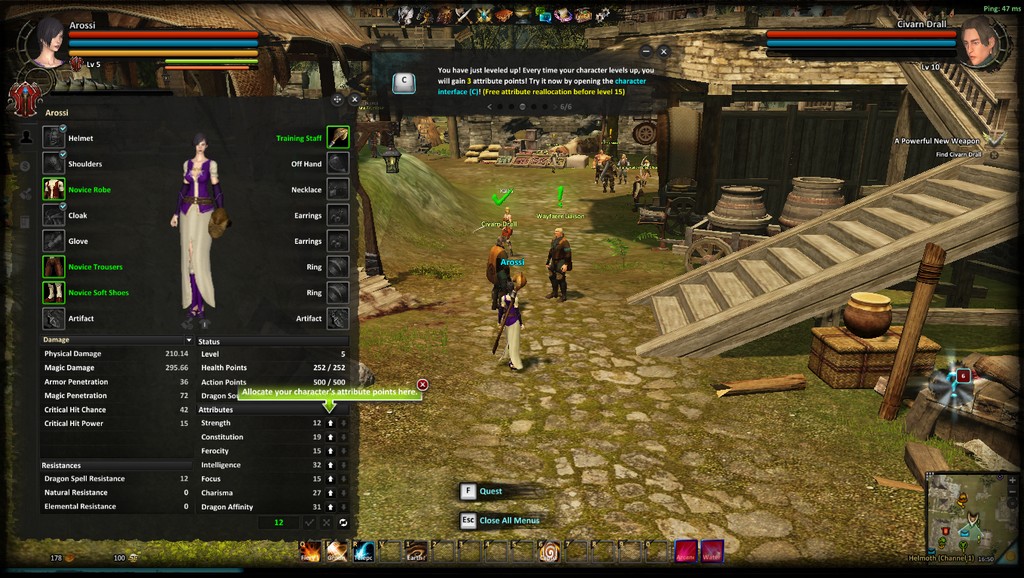 Here, There Be Dragons

Each time you level up in game, your character gains an increase in seven base stats: Strength, Constitution, Ferocity, Intelligence, Focus, Charisma, and Dragon Affinity. Strength increases physical damage and defense, constitution increases maximum health and health regeneration, ferocity increases critical hit chance and damage, intelligence increases magic damage and defense, focus increases physical defense and armor penetration, charisma extends the time your dragon can help you attack and boosts their attributes, and dragon affinity increases magic defense and penetration. You also gain three points per level in addition to the base increases to develop your character as you see fit.

At level 15, all classes gain a Mastery system, allowing each class to buff one or more of their core abilities, or even learn brand new ones. Sorcerers who use a lot of AoE abilities like Fiery Dragon’s Breath and Ground Fissure can increase the damage they cause, or add additional effects to the spells. Some skills can outright be changed through the system, such as the Sorcerer’s Arcane Missile auto attack changing into a melee ability that does magic damage instead of being ranged. The amount of points you can spend on the mastery is limited, however, so many players utilize a calculator to ensure they get exactly what they want. 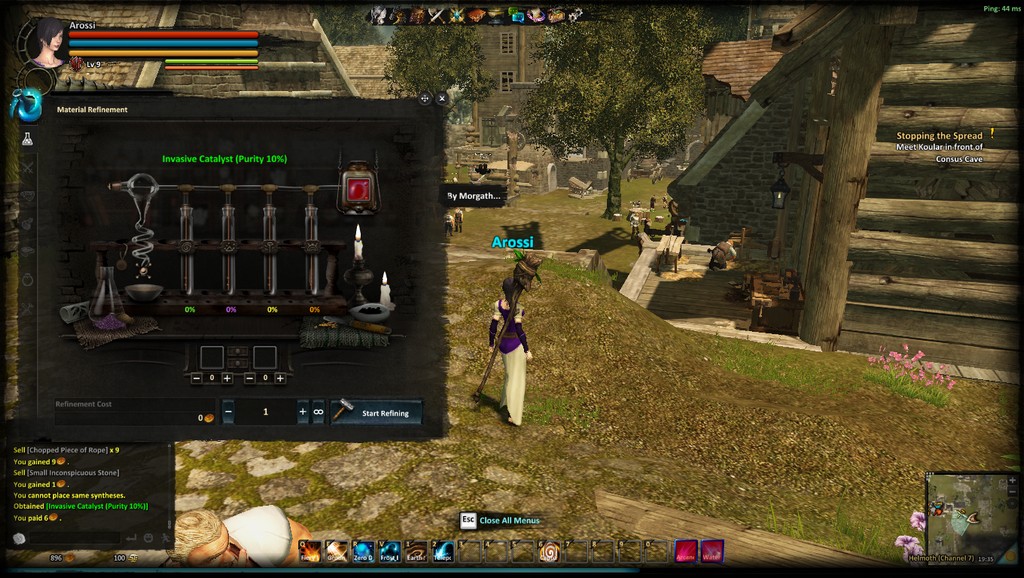 Can Anyone Make That for Me?

Crafting is a big part of Dragon’s Prophet. Each character can learn the Weaponsmith, Armorsmith, Alchemy, Chef, Tinkerer, and Carpenter professions. Recipes for each profession can be learned through leveling up said profession, and as random drops from monsters in the world. Weapon and armorsmithing produce weapons and armor, respectively; alchemy creates useful potions for healing and buffs. A chef can create various foods that provide buffs to character attributes for a time. Tinkers create jewelry as well as armor and equipment for your dragon. Carpenters create furniture for player homes, and can craft the Draconic Flute, a much-sought after item that summons dragons for the player to tame – rare, powerful dragons can only be obtained through this item.

Gathering items for crafting can be done one of three ways: nodes, monster drops, and your dragon. Herb, wood, and ore nodes are scattered around the world, and can be gathered simply by interacting with them. Monsters drop leather and cloth, meat, and a variety of other crafting materials. Finally, you can instruct your dragon to gather any of the above in great quantities, though this does require spending gold, and time spent waiting for the dragon to gather. The benefit to having your dragon do it, however, is the ability to continue playing the game in the meantime (your dragon will also gain experience, increasing the value). 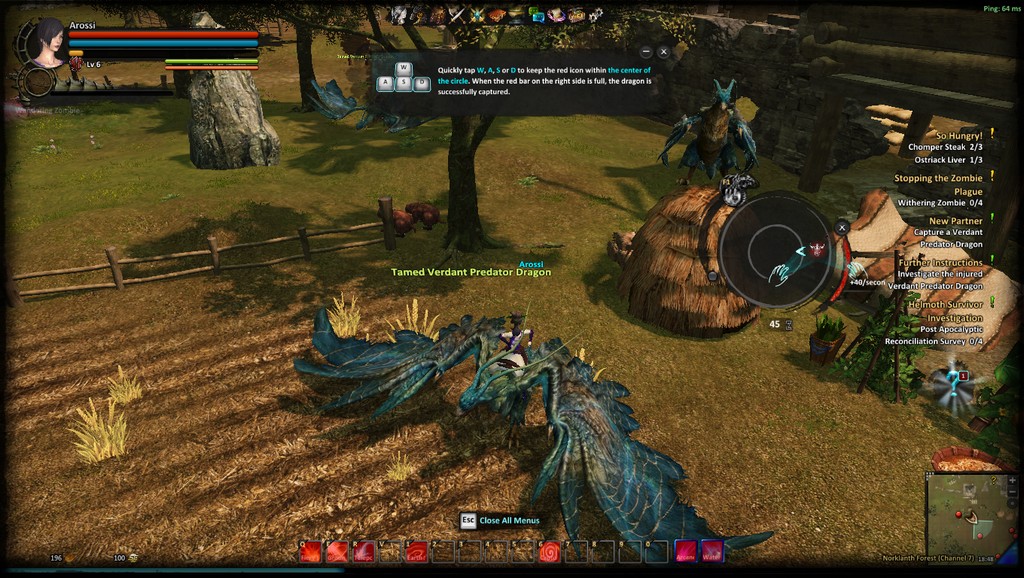 Unfortunately, there is one elephant in the room when it comes to Dragon’s Prophet: it relies fairly heavily on the cash shop to truly enjoy the game. Players are only allowed two dragons by default. If you want more, you’ll have to pay for them, at 99 Station Cash a pop (about $1.00). Additionally, inventory space is at a premium for the game, especially with the amount of crafting materials in the game. While you unlock more space at level 10 and 20, if you need the room before then, you’re looking at another 99 Station Cash per row of inventory room. There is also a slight buy-to-win aspect, as players can purchase hard-to-find item strengthening bonuses in the cash shop, giving them better equipment.

For a game with dragon in the title, Dragon’s Prophet certainly delivers. Each breed of dragon is unique, both visually and with the skills they learn. Some dragons can fly high, while others can only glide short distances, and others can only run on the ground. Choosing a dragon is often as much of a challenge as choosing how your character looks, or how to specialize. Being able to use your dragon as a combat pet and a mount adds to the feel of the game, and remains a solid, enjoyable gameplay mechanic as you level up. Combat is fluid and action-packed, which will keep players going even while trudging through boring quests. Being able to utilize every crafting profession is also a major benefit to people who want to do everything without having to create a long list of alts.

On the downside, inventory room is incredibly sparse, with a total of 40 spaces once you’ve reached level 20. Destroying items just to make room for more items to destroy became far too common, and was a clear bid for a cash shop purchase. Being able to only have two dragons as a free player was also stifling, since there are so many choices, even in the starting zone. Still, these things won’t deter dedicated players, leaving Dragon’s Prophet flying as a worthy free-to-play MMORPG.