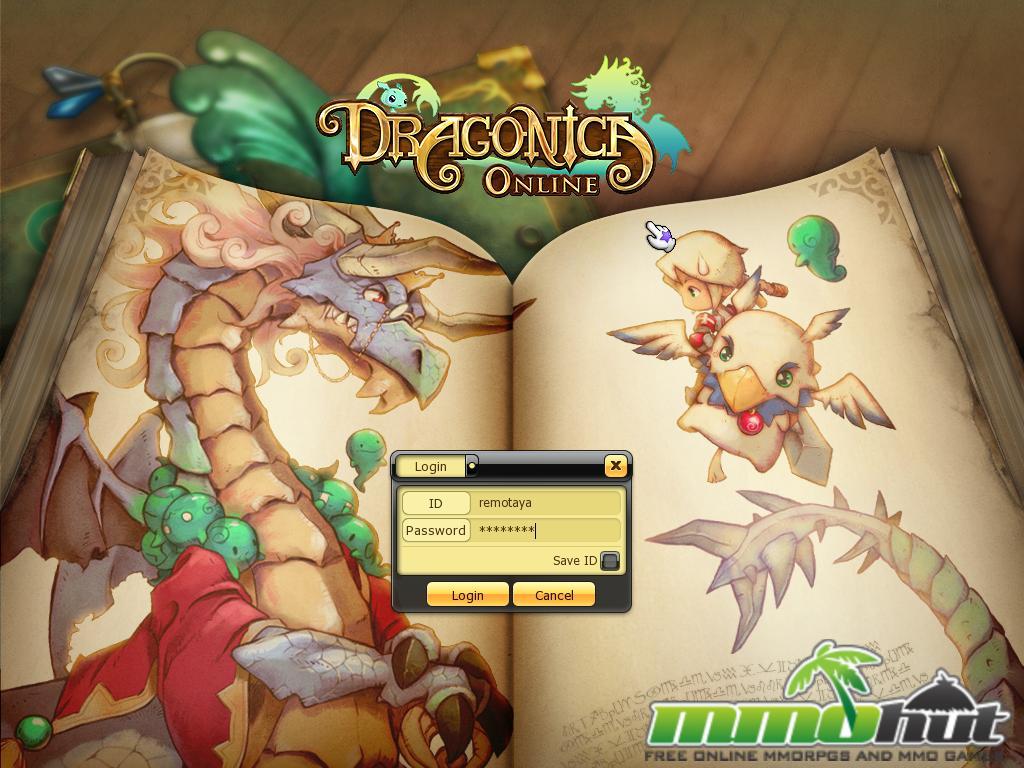 With so many free MMORPGs on the market, it’s sometimes hard to find a genuinely unique, fun game when so many MMOs these days simply copy each other. Luckily though, Dragon Saga happens to be one of those rare games that are… well… for a lack of better words, amazing. For those unfamiliar with Dragon Saga , it’s a 3D side-scrolling fantasy MMORPG with silky smooth gameplay and gorgeous cel-shaded graphics. The one word that best describes Dragon Saga is ‘awesome’, as Dragon Saga is easily one of the best free to play titles of 2009 and beyond. Why is that? Well, read on to find out!

Dragon Saga used to be called Dragonica Online, but its name changed since Gravity took over the service – and yes that’s the same Gravity that publishes Ragnarok Online, Rose Online and Requiem. From the moment I logged into Dragon Saga and saw the game’s sick opening cinematic which featured Gandalf’s (from Lord of the Rings) voice I immediately knew that this game as going to be good. The cinematic itself didn’t really sell me, but the fact that the game’s developer actually made one shows they actually care about their game.

The game’s character creation system, although nowhere near as detailed as the system in Perfect World, is quite good. Unlike most games, players have numerous customization options ranging from picking one of many hair colors and facial features. While on the topic of character creation, players in the game can choose from one of four starting classes (Warrior, Mage, Thief and Archer) with job advancements available at level 20, 40, 60, and 100. Counting the starting classes and every possible job advancement, Dragon Saga has a total of 28 classes (see chart below). 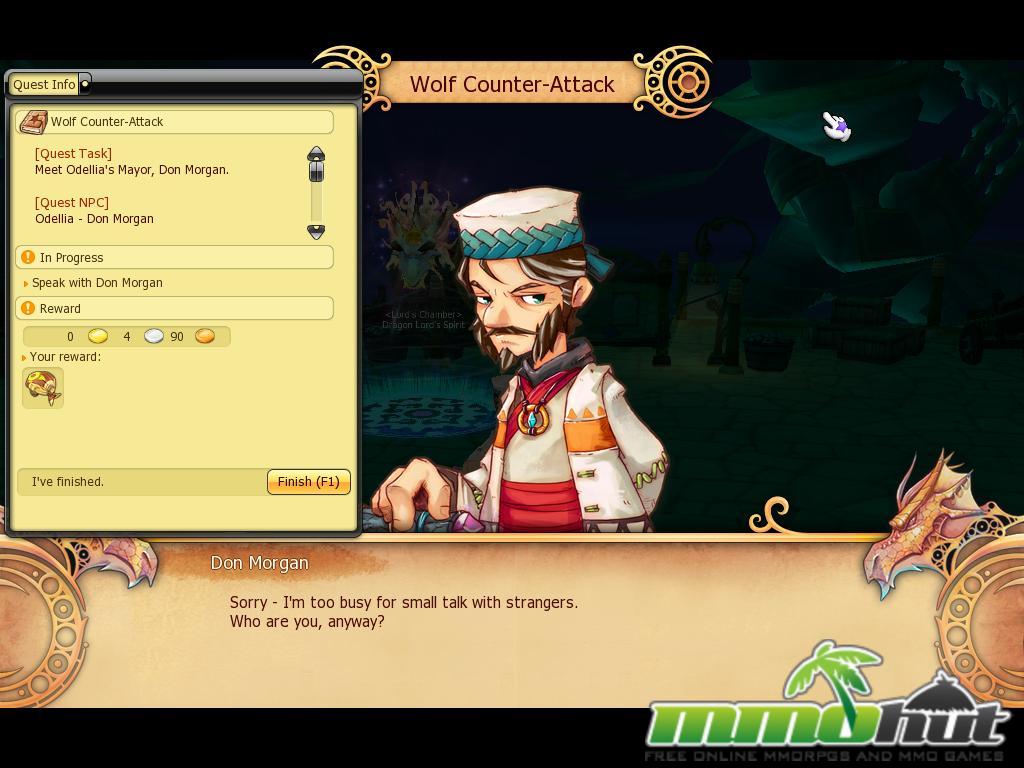 Upon actually logging into Dragonic Online players are presented with a short, yet informative tutorial which is well worth completing. A cute, flying blue cat named Poporing guides players throughout the early aspects of the game by explaining gameplay mechanics as needed making the extremely easy to pick up and learn. I guess the reason Dragon Saga is so easy to pick up and learn is that the game is translated so well into English that the tutorial is actually easy to understand. The solid translations also add to the overall enjoyment of the game, which I feel is well worth pointing out, as MOST free to play titles have fairly poor translations. Basically, what I’ve been trying to say in these last three paragraphs is that Dragon Saga is a really ‘polished’ game. Every little feature, from the interface to combat, has a ‘high-quality’ feel to it, meaning everything looks (and actually functions) great. One small complaint with the combat though, is that it does get a bit repetitive. Sure, you can use skills to vary up your combos, but mashing the same few buttons hundreds of times in a single dungeon can feel a bit tiresome.

Perhaps Dragon Saga’s most defining characteristic is its originality. Dragon Saga is really the first 3D Side scrolling MMORPG out there, at least in North America. The gameplay is also unique, but the best way to describe it is a combination of the fast paced ‘action-oriented’ combat system in Lunia Online mixed with the side-scrolling gameplay of MapleStory. For those unfamiliar with the two titles I just mentioned, think of Dragon Saga as one of those old-school arcade games like Gauntlet Legends or Golden Axe, but with a persistent world and MMO elements.

One interesting aspect about Dragon Saga is its control scheme. Unlike most MMORPGs which require the use of both the keyboard and mouse, Dragon Saga can be played almost exclusively with the keyboard, without ever having to touch the mouse. The thought of playing a game only using the keyboard may sound awkward, but I have to commend the game’s developers, as the control scheme works wonderfully after some practice. It only takes a few minutes to get ‘comfortable’ with the controls, but it’ll take a lot longer to actually master them. Personally, it took me a good three to four hours before I completely stopped screwing up my hotkeys in battle, which is one of my only real complaints with the game: it’s just too easy to hit the wrong hotkey when players are required to use so many.

One of my personal favorite features in Dragon Saga is the game’s instanced dungeons. The game has many dungeons scattered across the game world which each have five different ‘difficulty’ settings. The harder a dungeon’s difficulty is the better the loot and experience rewards. Running through a dungeon on the highest possible difficulty usually requires a full party (four players), as the enemies tend to be too difficult and too many to take on solo. One thing worth mentioning is that these instanced dungeons aren’t that long, as most of them can be completed in well under five minutes; they don’t require much time commitment.

From my personal experience, running through dungeons are one of the best, if not the best, ways to gain experience and gear up in Dragon Saga. This is because players are randomly rewarded with bonus equipment/loot upon finishing one of these instanced dungeons based on their own individual performance during the dungeon run. For example, those who finish off with an ‘S’ ranking are rewarded with much better bonus loot than those who end with a ‘C’ rank. Rankings are based computed using a few simple variables like ‘maximum combos’, ‘number of deaths’, and ‘number of hits taken’. Those who played Lunia Online should be familiar with this sort of individual ranking system, as Dragon Saga certainly ‘borrowed’ this particular feature from Lunia.

One small complaint I have with Dragon Saga’s instanced dungeons is that they’re all way too similar. Most of the dungeons are structured the same exact way – players have to defeat a bunch of random monsters before moving onto a boss fight. I’m sure as Dragon Saga gets updated though the developers will vary up the gameplay a bit more inside dungeons, but as it stands too many of the dungeons feel repetitive. 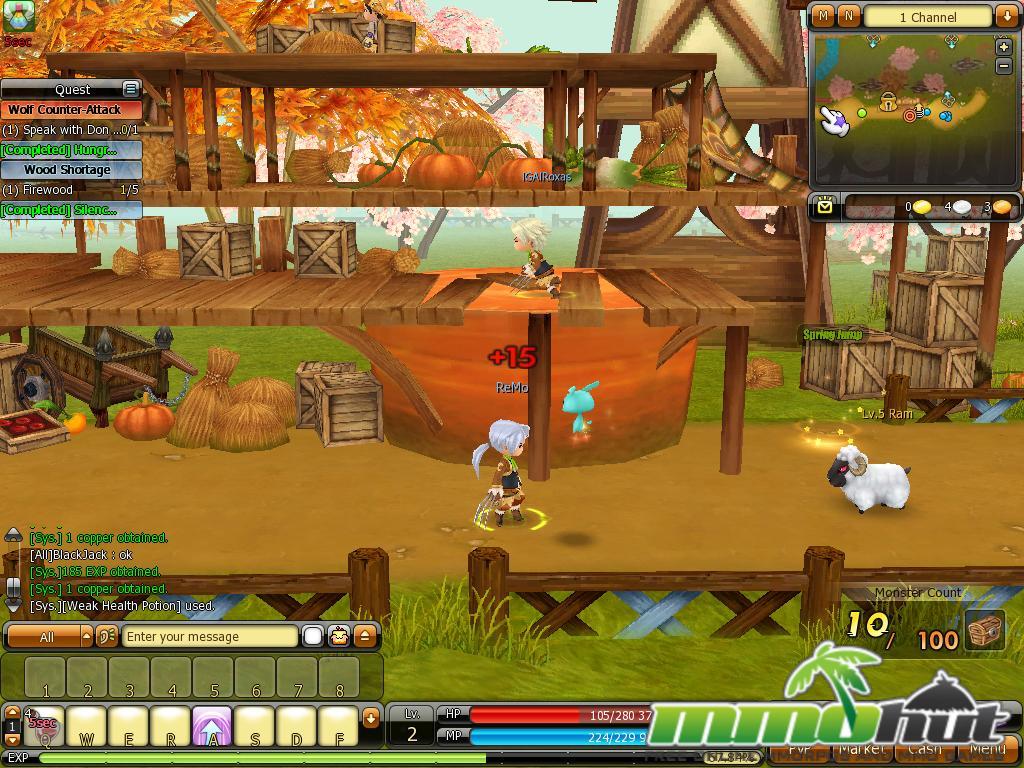 I doubt many gamers place as much importance on a game’s interface as I do, but I personally feel that when I play a game for hours on end every day, the one thing I use to interact with the game (the interface) should work well and be easy to use. One reason why game’s like Atlantica Online and Runes of Magic are so successful is because they each have an easy to use interface. No matter how good a game is, a poor interface can quickly ruin it. I can safely say though, the interface in Dragon Saga is top notch. It’s easy to use, sleek and helpful. One reason why I love the interface so much in Dragon Saga is that the game’s map shows the ‘recommended level’ for every single zone in the game while the game’s journal automatically keeps track of every monster ever fought, as well as every quest ever completed. Heck, the game even recommends players what sort of gear they should be using at their current level as well as pointing out quest locations on the mini map. Simply put, the interface in Dragon Saga is top notch.

I’ve already spent quite a bit of time praising Dragon Saga, but I’d like to point out that Dragon Saga deserves the praise. Gravity Interactive has done a phenomenal job with the game. The game does have its drawbacks though – The game does get a bit grind heavy mid to late game. Plus, in terms of playable classes, the game is a tad bit lacking – compared to MapleStory. Much of this review was spent discussing certain features in detail, but keep in mind Dragon Saga also has all the other generic MMORPG staples that weren’t mentioned in this review like PvP (starting at level 20), crafting, guilds, questing and such.

With its unique and addictive gameplay Dragon Saga is one of the best free to play side scrolling MMORPGs currently on the market. Those looking for a solid free to play title should look no further; Dragon Saga is certainly worth checking out. The button mashing combat can get tiresome after a while though.