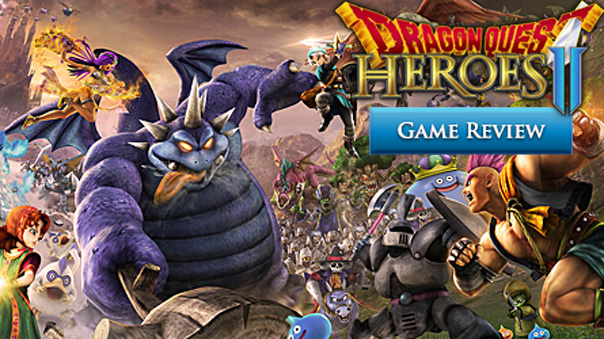 So, I played the original Dragon Quest Heroes. Hell, I’ve played every Dragon Quest game to come to America, except the “Monsters” franchise. I should get to those… anyway, I’ve played basically every game in the series, and I was insanely excited for the original “Heroes.” I’m a fan of the Musou style of gameplay, the open worldish beat ‘em up. But that’s not what Heroes did. It was more like stages, where you defended a point and summoned monsters, and it was kind of a letdown. I enjoyed it, but the more I played, the less I liked. However… Dragon Quest Heroes 2 fixed literally everything about it and so much more. I felt less stupid casting Zoom than I did flying around in a giant castle fortress. That flies. Instead of going stage to stage, like an old-school platformer, there is the main hub town, where you acquire new weapons and armor, swap party members, get side quests, stuff like that. It expanded on what worked well in the original and fixed the things that made me want to toss my Playstation 4 into the Ocean. So, let’s talk about Dragon Quest. Dragon Quest Heroes 2: Twin Kings and the Prophecies End, lets you choose between one of two cousins, a boy and a girl. The boy uses dual swords as a base weapon, and the girl uses a sword and shield. However, you can swap weapons around, to find the playstyle that suits you. Whether you want two handed axes, a boomerang, whip, bow and arrow, whatever you are feeling, it’s got you covered. This is a game series that’s all about the nostalgia for the long-time fans of the series, and I will admit, that is a big deal to me. Instead of having a bland world map that you fly around on, you leave the castle-town to head onto large open maps that connect to a variety of areas, dungeons, swamps, dank forests. Those are more like the Dragon Quest Heroes 1 feel, where you move area to area, obliterating hundreds of enemies. There are a lot of other press sites that aren’t fond of these new mazes and such, but I could not disagree more. Sure, it slows down the pace of the game a little, but is that really so bad? It doesn’t haveto be a Musou Clone. Dragon Quest Heroes is its own entity. 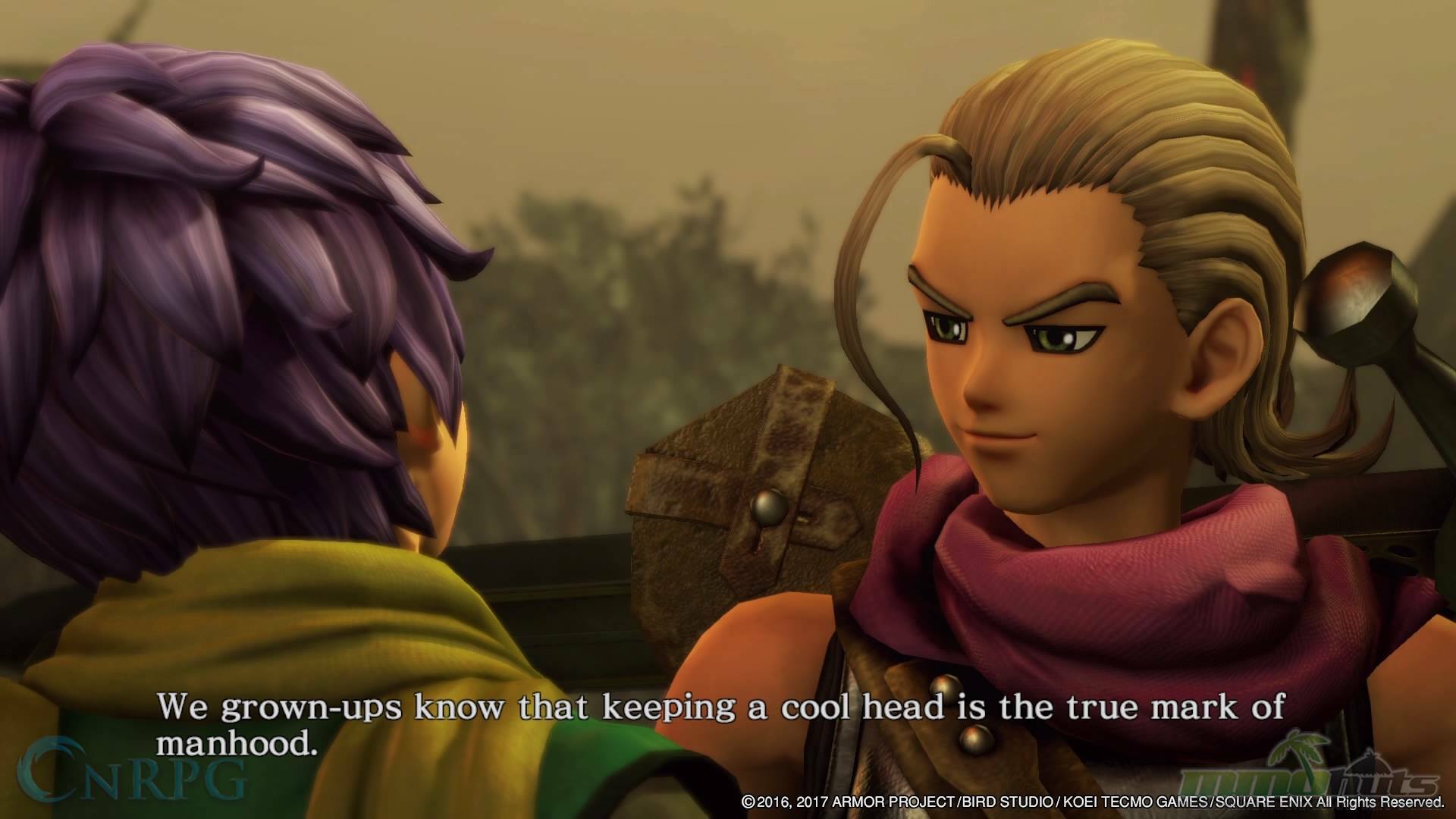 For example, eventually you hit a swamp battle, where you have to traverse poisonous, damaging zones of purple death, much like the NES Dragon Quest games. But here’s where they tie in the Medal Monsters of the last game: If you summon the Babble [little green poison monster], it will give your party immunity to poison for a temporary time. So you have to juggle using regular monsters, and using the Babble to move safely. They create tactical moments to reward your strategy, while constantly mixing in action intense horde destroying moments to keep your trigger fingers slamming. Sometimes these Medal Monsters heal you, recharge your mana, fight for you or you can turn into them! My personal favorite is the giant Golem/Goldman, punching bosses in the teeth. Personally I’m not really that wild about the Monster Medals in the game, but I will use them because it’s a part of the mechanics! It does however, fall into the trap that most Musou games fall into: The combos are easy, repetitive, and you’re going to do a lot of them. It also requires a fair amount of grinding, for levels, and for materials. Thankfully, each day has a different offering, if you check the schedule on their website. You also aren’t forced to just go at it alone forever. You can ask for help from your friends, for them to join you on a map, or go to their battles and help them out. This can only occur in the “War Zones,” the actual stage battles, not in the open world. Kind of wish they could farm in the open world with me… 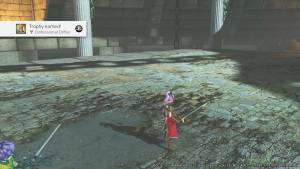 This is the calm before the storm.

There is also solo/side quest maps you can go on from the Inn, where you can tackle them solo or multiplayer. This is one of the things I find frustrating about the game though. The multiplayer part of the game is incredibly clunky; you get booted after every battle so you have to have a stupid password… there are easier ways to do this. However these multiplayer side maps are way harder than the regular game, and the first one kicked my ass because I was cocky. But you do have to farm and farm a lot. Upgrading gear, crafting new, powerful stuff, you have to put work in. You also have different character classes, like in Dragon Quest 3. Each has their own style, from Priests to Warriors. Some side quests will require you to play as one of these, or use a certain attack found on a particular character/class. These classes have their own levels, but I didn’t really find much of a reason to level them, except to change up the game just a little. I actually didn’t play as the two cousins all that much. As soon as I started getting characters from other games, I figured out what I wanted my team to be. And one of the most important things to me, at least: Torneko Taloon is in the game. Why is that important? Most of the characters that are famous and important are badass warriors, hunters, priestesses. Taloon? He was a damn merchant! Wielding a long-handled abacus, he kicks the snot out of bad guys using cool items he acquired in Dragon Quest IV. The cast is a lot broader this time, and I appreciate that. 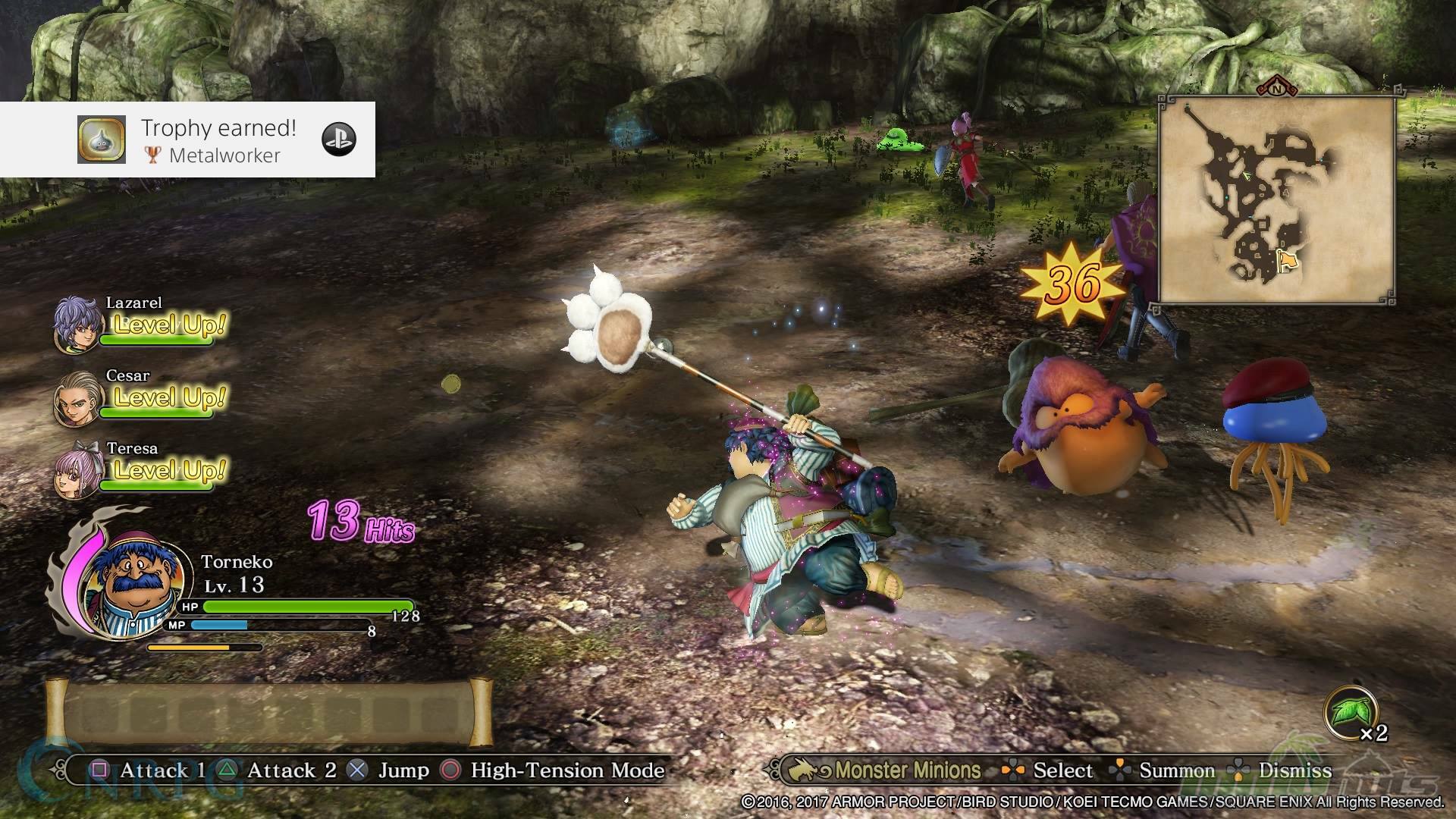 TALOON IS UP IN THIS MOTHER…LOVER.

Conclusion: Great (4/5)
I love this game, guys. It’s a step in the right direction compared to the last one. I don’t really agree that the new styles of battles are a slog but I get why someone might feel that way. I just don’t feel the same way. However, I play it in hour bursts, where I just grind, kill stuff, and enjoy the story. The Musou style of game really isn’t for everyone, and part of me feels these games are really just made for people who love the Dragon Quest story. There are so many wonderful nods to the franchise as a whole, from the music and the sound effects to the fanservice. And I don’t just mean Jessica. Fanservice is more than boobs! It’s the little touches that make a long-time fan of Dragon Quest tear up, just a little bit. Seeing characters from older games come to life in a new way, men and women who did not have a voice now do. Whether it’s Terry the Bandit, Angelo the former Templar, Torneko Taloon, the most badass dude in all of Dragon Quest… But where is Erdrick/Loto himself? That’s who I really want to see. Maybe if there’s a Dragon Quest Heroes 3, we can go from a fictional part of a fictional franchise to seeing the history of the original trilogy come to life. There are so many cool battles and adventures that they could have. Does it require more grinding than some might like? Sure. The new battles and maps are certainly different, and try to add an RPG Element to the game that wasn’t there before… but I like it. I like the monotony of battle to be broken up by a maze, or a quest, or a survival mission. There are parts of the game that feel like a bit of a tedious grind, but I feel like it’s a different way to play a Musou game.