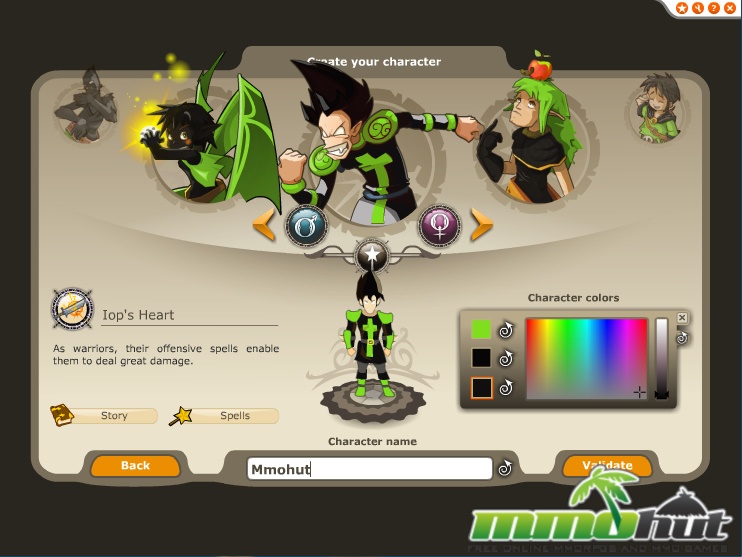 Released in September 2005 by the French firm Ankama Games, Dofus is a fantasy MMORPG developed using Adobe’s Flash software. The game boasts a huge worldwide audience with over 4 million accounts created since launch. Dofus is primarily a pay to play game requiring a monthly subscription but it does offer free players unlimited access to the beginner zone of Incarnam, the village of Astrub, and its surrounding regions. Dofus’s most distinguishing feature is its distinct turn based combat which is similar to the system used in many ‘tactics’ style console games.

Remarkably the entire Dofus game client totals less than 3 mb but after installation and patching, the total file size reaches a bit over 200 mb. Account creation is simple and is done on a single page. Server selection is a bit more complicated since your server list will differ depending on your geographic location. The game has been localized in French, Spanish, Italian, Dutch, and Portuguese and players from those regions will see servers catering to those populations. If you’re in North America like me, you’ll see the International (English language) servers of which there are currently five. These servers come in three different forms; classic, heroic, and tournament. Dofus will automatically recommend a classic server and this is the best option for first time players. Character creation is very impressive for a 2D game. There are a total of twelve classes to chose from with each represented by a different avatar. The character designs are a bit goofy, but Dofus is an animated so it fits in well within the atmosphere. You can play as a granny, treefolk, cat girl, pixie, elf, and other strange forms. The classes have odd names but boil down to standard RPG templates like archer, Paladin, Summoner, Assassin, Cleric and so on. Appearance customization is limited to selecting a gender and the colors for the character’s clothes, trimming, and skin color. 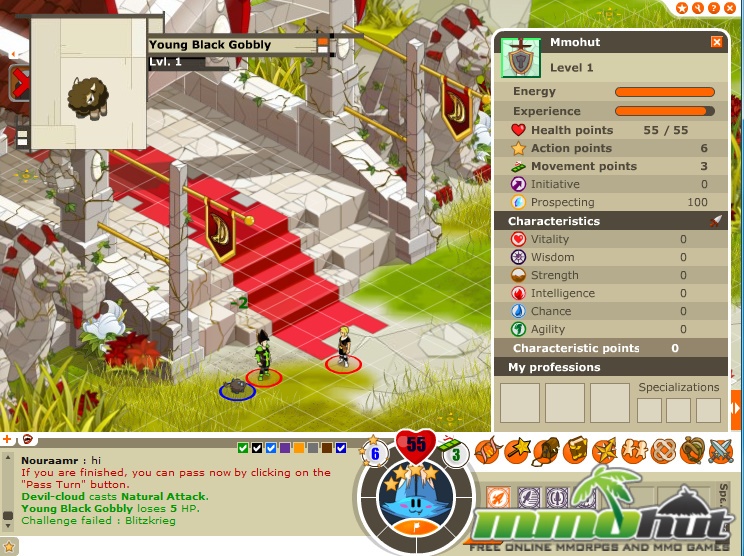 The World of Twelve

After character creation, a short intro cinematic plays which explains a bit of the game’s backstory. There were six sacred dragon eggs in the world which are collectively known as the Dofus. Some time ago they were stolen and this led to unrest throughout the land. It falls upon you to find the Dofus and bring order to chaos. Players begin their adventure far above the clouds on a floating island called Incarnam. This area serves as a tutorial zone where players can learn the basics before descending the the mainland, known as The World of Twelve. Movement is handled exclusively through the mouse in Dofus with a standard point & click interface. Teleporting from one screen to the next requires players to move onto these small, circular icons on the floor. At first these icons are difficult to spot, especially when they blend in with the background (they’re light green & yellow) but it won’t take long to train your eye to easily spot them. Eventually, players will come across NPCs with quests on offer. The first of these quests involves killing cute puff balls that come in black and white.

Combat in Dofus takes places on a separate screen once players walk over their target. Before a fight begins, players are presented with a grid map with available starting locations shown in red. To save time, be sure to select the location nearest your opponent. Combat is turned based with each participant receiving a certain number of Action Points (AP) to use that turn. Players can move up, down, left, or right tile by tile but each spell has its own range. Melee attacks can be performed on adjacent targets while ranged spells have a much broader range. Characters can move and attack or attack than move away though moving away from certain enemies causes them to get in an attack of opportunity, similar to combat in tabletop D&D. There is a time limit on each participant’s turn but combat is still slow paced, especially when several players are involved in a single battle. Even after attacking, players must manually click ‘end turn’ before the game moves on to the next person. It is important to note the difference between combat in Dofus and in other turn based MMORPGs like Atlantica Online or Wonderland Online. Dofus is a ‘tactical role playing game’ with a combat system similar to the one found in games like Final Fantasty Tactics.

As players continue to explore Incarnam, they’ll eventually level up and earn the 5 stat points and single spell point that comes along with it. Each class has its own spell tree though some spells are shared among the two or more classes. Spell points can be used to learn new spells or to rank up existing ones. All classes including melee specialists make use of spells which can be more accurately described as abilities in Dofus since there is no mana pool, only an AP pool refreshed each turn. The five stat points earned each level can be distributed freely among 6 stas: Vitality, Wisdom, Strength, Intelligence, Chance, and Agility. Players can hover their curser over a stat in the character info menu to learn what it effects. When players grow tired with the tutorial area, they can descend to the city of Astrub via hot hair baloon. Astrub is a large city with plenty of NPC vendors and other buildings. There are even player owned buildings in town that require key codes to enter. Sadly free trial players won’t have a chance to experience much beyond this point. 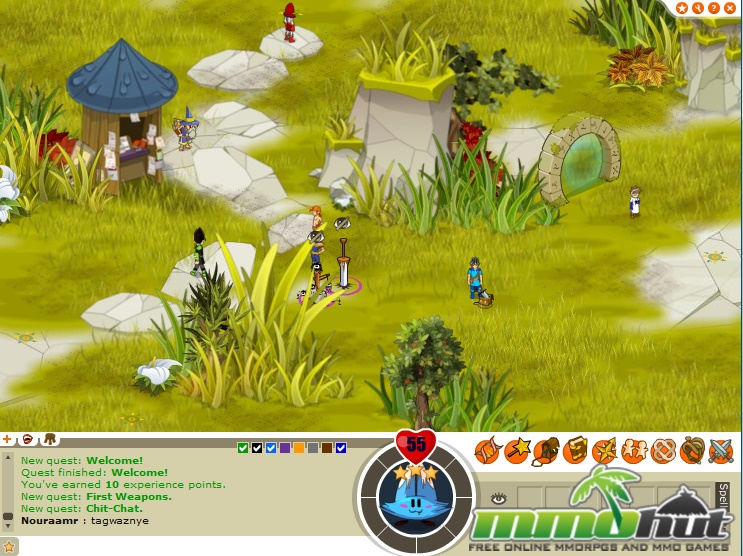 Free trial players in Dofus are restricted geographically to the Incarnam and Astrub areas but also have several other restrictions. The monsters in the trial areas don’t exceed level 20 which limits how high players can level up. Additionally, free trial players cannot use pets, participate in PvP, join or create guilds, use the marketplace, or increase their profession limit beyond level 30. The free trial content makes up about 5% available content in Dofus, to access the rest players must subscribe. The monthly subscription fee is set at $6.90 with slight discounts given if you pay upfront for several months. While the Dofus free trial leaves a lot to be desired, it is more than enough to get a feel for the game and decide if it’s the right MMORPG for you.

Dofus is a small game that packs a large punch. With attractive yet simple graphics, in depth character development, and a unique combat system Dofus has managed to attract many gamers. The trouble is that there is far too little free content to experience. Gamers looking for fast paced action or more modern graphics may also be disappointed.