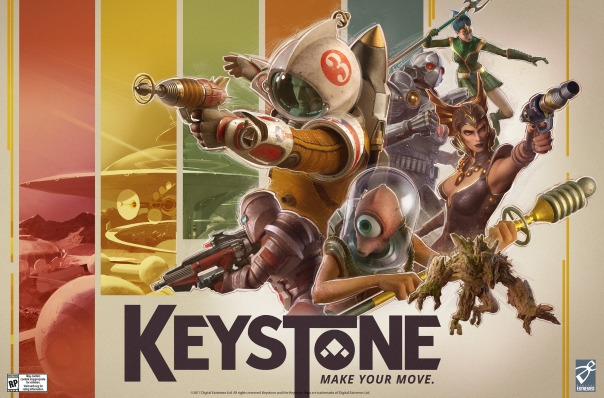 Stemming from the success of its free-to-play, cooperative online hit Warframe®, Canadian developer and publisher Digital Extremes has formed a second internal development team to work on a new game concept that expands its vision of creating high-quality free-to-play experiences built in tandem with its community. The fruits of this initiative is Keystone™, a competitive first-person shooter with a distinct blend of first-person action and deck-building strategies. Digital Extremes is inviting community-minded players to sign-up on the newly launched Keystone website for a chance to participate in the Closed Alpha starting later this week.

With the look and feel of the 1970’s retro-pulp era, Keystone will take players on a journey through a multi-verse that begins on the starting square of an intriguing, mystical board game. Players will wield unique decks of cards throughout the match that offer handy benefits, amazing powers, and fearsome weapons. With timing and resourcefulness, personally customized decks give players the upper hand in battle both individually and when strategically coupled with teammates’ decks. To find out more and to participate alongside the developers in building the concept of Keystone, sign up for the Closed Alpha today.

First-wave players will be notified this week on Thursday, May 25 to download and prepare for the first Closed Alpha session beginning Friday and ending Monday, May 26-29.

The long-running success of Warframe has enabled us to build up a second internal team to create a wholly different but equally satisfying game concept that we’re really excited about. Keystone originates from our roots in the FPS world and mixing genres like we have done with Warframe. We believe there’s room to expand the confines of what defines a good FPS and hope our community will see the potential and get on board for the ride.