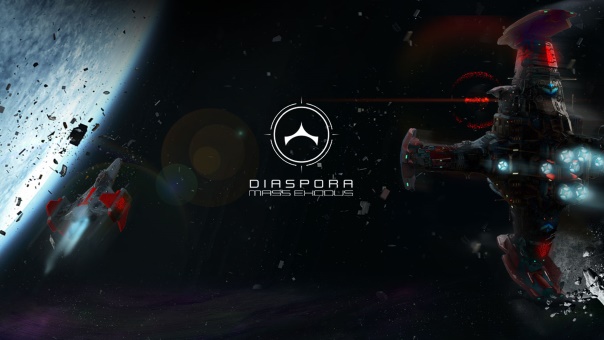 Back in the days of BBS’s I played a lot of door games. One of the first I ever experienced, and love to this day, is Tradewars 2020. I daresay Tradewars 2020 paved the way for the genre of space adventure games that would include such titles as EVE online. You would fly from system to system, trying to buy low and sell high, filling your cargo holds up to capacity and fighting or avoiding space pirates who wanted to take your haul off your hands, with extreme prejudice. You could upgrade ships and build bases on planets. It was great fun.

Fast forward to June of 2000. A small London-based web-design firm called Altitude Productions Ltd developed a Java-based web version if a title called Diaspora. In September of 2000 Diaspora was rated ‘Game of the month’ by one game listing site, and by April of 2001 it had around 70,000 registrations. Mind you, this was before gaming was mainstream, and for a simple web game, that was pretty good for the time. Despite this, the ‘dot com boom’ was transpiring around this time, and Diaspora seemed to suffer losses that caused Altitude Productions Ltd to shut the game down, much to the disappointment of its fans.

One of those fans, Thomas Wenger, went on to work in IT, as well as working on indie game projects. He always had a spot in his heart for his time spent on Diaspora, though, and in 2014 he launched Angry Rabbit Studios. Then, in December of 2018 Diaspora: Mass Exodus arrived on Steam.

The best graphics in the entire game. I could actually just sit and stare at this for hours.

Now, I never played the original Diaspora, but with the slightest bit of research I can really tell Wenger and his crew have tried to be faithful to the original. In some ways, I think perhaps a bit too faithful. After all, this isn’t 2000, it’s 2019. Diaspora was a point and click browser game, and its successor, Mass Exodus, follows in that tradition. Yet it’s built on the Unreal 4 engine. I feel like there’s so much wasted potential here, but after speaking to Wenger, I understand that they originally wanted to make an updated clone. They were unable to do so, however, when they found out there were no surviving copies of the original game assets.

So, instead, Wenger and crew have created Diaspora: Mass Exodus from memory the best they could. I imagine they scoured the internet for images from the original game. They definitely have captured the core essence of the game, by all appearances, as well as using the same naming conventions. There are 6 classes of ships, and 7 types. Each class can include multiple types of ships. IE, you might have a Zephyr fighter, a Zephyr carrier, and a Zephyr hunter, or a Talos fighter, Talos carrier, and Talos behemoth (I don’t know if all three of those last is true, just throwing out an example).

You can unlock better classes of ships for purchase by gaining in experience levels. Experienced is gained in two ways currently: via combat, or by quests. Thankfully, not all quests are combat related, and Wenger says more quests types are coming, with a wider variety of objectives. Still though, it seems odd to me that a game that calls itself a “space trading game” on the Angry Rabbit Studios website would not grant experience in any sort of meaningful way for trading.

This is combat in Diaspora. You engage a target, then sit and wait and hope not to die before it does. There’s no real strategy or skill to it once you’ve engaged the target, just autofire. Also, that’s the only color of lasers ever.

To be honest, this is only one of my issues with the game overall. Several of what could be considered core features of the game are still under development. This by definition puts this game in an alpha state, and yet this title isn’t listed on Steam as Early Access. Additionally, there are a plethora of linguistic errors in the text of Diaspora: Mass Exodus that really detract from the immersion and really make this game look like amateur hour. That being said, Wenger admits that’s essentially what Diaspora: Mass Exodus is, given that it’s the first title from Angry Rabbit Studios, so take that as you will.

The music is, overall, pretty good. It has a very sci-fi nuevo feel to it. Unfortunately, it gets pretty repetitious after a couple hours of play, and made me want to flip on Pandora. Given that the rest of the game’s audio is limited to ‘pew pew’ sounds of lasers and stock explosions, you’re really not missing anything by turning it off after the music wears on you. Which, by the way, comes at you quite loud. I had to immediately lower my computer volume, and then reduce the in game volume to about 25% after launching. You have been warned.

Another issue with settings is that the graphics only seems to come in 2 modes. 1600×900 and broken. The options menu took some wrestling with to even allow me to change the resolution, and when I did it was to 3840×2160, and this just made the game freak out. How there’s no 1920×1080 resolution escapes me, but, well, see above comments RE amateur hour.

Diaspora: Mass Exodus is also a game that revolves heavily around Player vs Player interactions. As Wenger said, “the players are the content”. As with many PvP oriented games, there’s a good amount of bristling and bluster on the game’s general chat. That being said, there are also quite a few decent folks who are passionate about the game and who try to be very helpful.

Joining Guilds is also an option, and you can ‘blacklist’ players if someone is bothering you more than you want to deal with. Unfortunately, you have to navigate all the way to the options menu and manually type out the person’s name if this is the case, rather than simply being able to click their name in the chat, which you can do in order to send them private whisper messages, invite them to a party, or initiate trades. Tl;dr: The community might be a bit rough around the edges, but it’s got a decent, if very small, core.

Which brings me to something else I wasn’t super pleased about seeing, which was Wenger urging people to make positive reviews on Steam in order to increase its rating and draw in more players. At one point, it even looked like Wenger was offering 100,000 of the game’s currency, DC’s (Diaspora Credits) in exchange for people placing those positive reviews, though he might have been doing so tongue in cheek.. But, hey, I’ve seen a lot worse in regards to people farming reviews, I guess.

The gameplay of Diaspora: Mass Exodus is one of the few places where the game does pretty okay. Essentially, you travel from ‘node’ to node within a galaxy, visit planets, and try to make money (and gain xp) in a variety of ways. You can hunt AI controlled ships, mine asteroids, or try your hand at playing the markets: buy low at one planet, sell for a profit at another. In the starting sector, however, the price variation between planets is quite small, to the point of being practically non-existent.

Asteroid mining is challenging when you first begin because asteroids don’t stay in a given node (Author’s note – Asteroids were patched in the starting area after the time this article was written. Their health was reduced, and their movement speed was slowed down). However, there’s no sort of indication of where they travel to. Since it’s a 2D game you just sort of watch the asteroid leave, and your ship apparently can’t follow it and shoot it? I don’t know, I found this to be silly. It becomes less of an issue when you can afford to upgrade your weapons, but this really only leaves one way to earn cash in the starting sector, and that’s to hunt AI ships. Again, for a game that talks about ‘making your way how you want’ this seems to be a bit of a pigeonhole. Maybe it will improve in the future (looks like it just might have).

I can see why Diaspora: Mass Exodus has a few fans. It’s going to be very niche, and is going to require people who are willing to overlook the myriad faults of the game and be willing to put up with some abrasive personalities. It’s a PvP game after all. Still, that doesn’t mean it needs to be toxic, and I really do hope that Angry Rabbit cultivates a spirit of friendly competition, and not harassment or bullying.

I have some issues personally with Angry Rabbit’s Premium services policies, and other players voiced similar concerns. As it stands, you are allowed only one account per IP address. Premium accounts are exempted from this rule, however, meaning you can pay for 4-5 premium accounts, level them up, and then gang up on people. One of the developers said that this is “just like buying friends,” and suggested, “a guild of people could do the same thing.” Still, that is a group of people playing together, which seems a lot better than one person buying a guild’s worth of accounts and then hunting other players, and smacks distinctively of pay-to-win. There are other issues with their Premium currency purchases, too, such as ship modules that you can only purchase with real money currency.

I give Diaspora: Mass Exodus a 2 out of 5. I wish I could go higher, but given the sheer volume of its faults, I really can’t. Between the unfinished features, dated graphics, cheesy 2D point and click game mechanics, and prolific errors in text, Angry Rabbit Studios has their work cut out for them, otherwise, the “Mass Exodus” is going to be the players leaving the game. That being said, I think Thomas Wenger is a dedicated developer, and has every intention of seeing that work done. Time will tell.