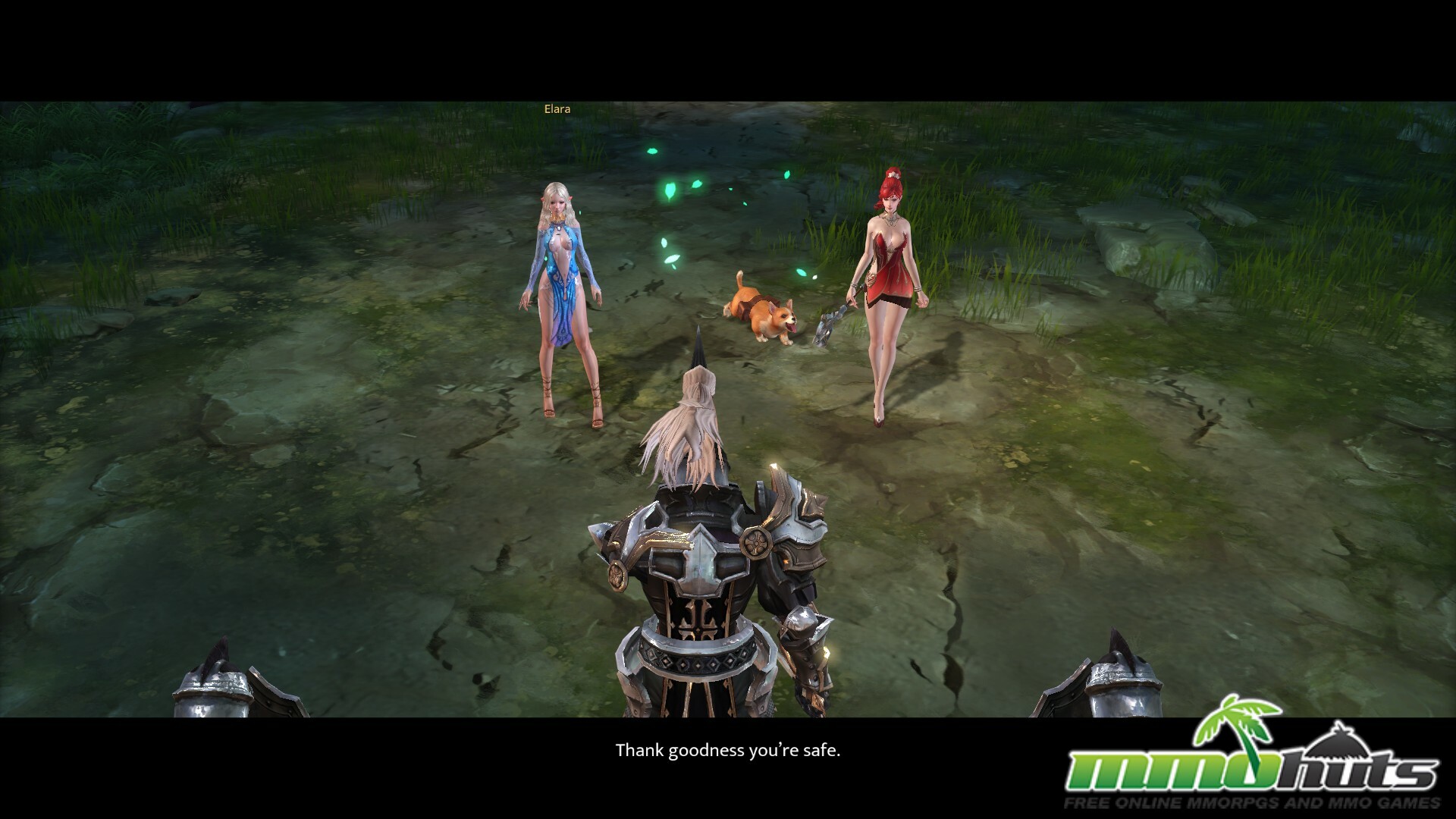 Recently I’ve been working on getting to know “Devilian,” another title by Trion Worlds. In its own way, it reminds me of Echo of Soul in the character customization, right down to the characters being gender-defined, which I’ve never really agreed with. It’s not terrible, but on a personal level, I’d rather have my Evoker be whatever gender I choose for them. Devilian’s a dungeon-crawling MMO that definitely feels like Diablo. It’s free-to-play, and a pretty intense action RPG to boot. Right out of the gate, I found the damage on the Evoker to be fast-paced and absolutely ridiculous. It’s got a lot of cool skill customizations and in addition, like all characters, can temporarily turn into bad-ass demons called Devilians that have new skillsets and obliterate anything in their paths. All four characters are a blast to play, but sadly I had to delete one a few times to try the others; you get at most two character slots to start with, but you can spend money to increase those slots. Though you’re probably better off starting your spending to deal with your tiny, puny inventory.

Those are things that bother me a little, mostly because I suffer from the alt-sickness, constantly switching to try other things to figure out what I want my main to be. Even if it means starting over four or five times. It’s a free to play game, so of course there’s going to be a cash shop, but it doesn’t really give players a huge advantage that I’ve seen. It makes life easier, makes things go a little smoother (more inventory space, attire that slightly modifies health/movement speed), but nothing game breaking. You can have cool pets to follow you and help loot/sell gear when you’re far from home, and though killing monsters does not seem to give a lot of exp, the leveling grind isn’t as harsh as one might think. Quests give fair exp, and there are also group dungeons to help you go. I also like that the game lets you move with WASD or click to move, depending on your preference. If you prefer both in different situations, you can even flip your mode on the fly; I found myself using WASD for precise moments to dodge attacks, while click to move satisfied me in slower moments. 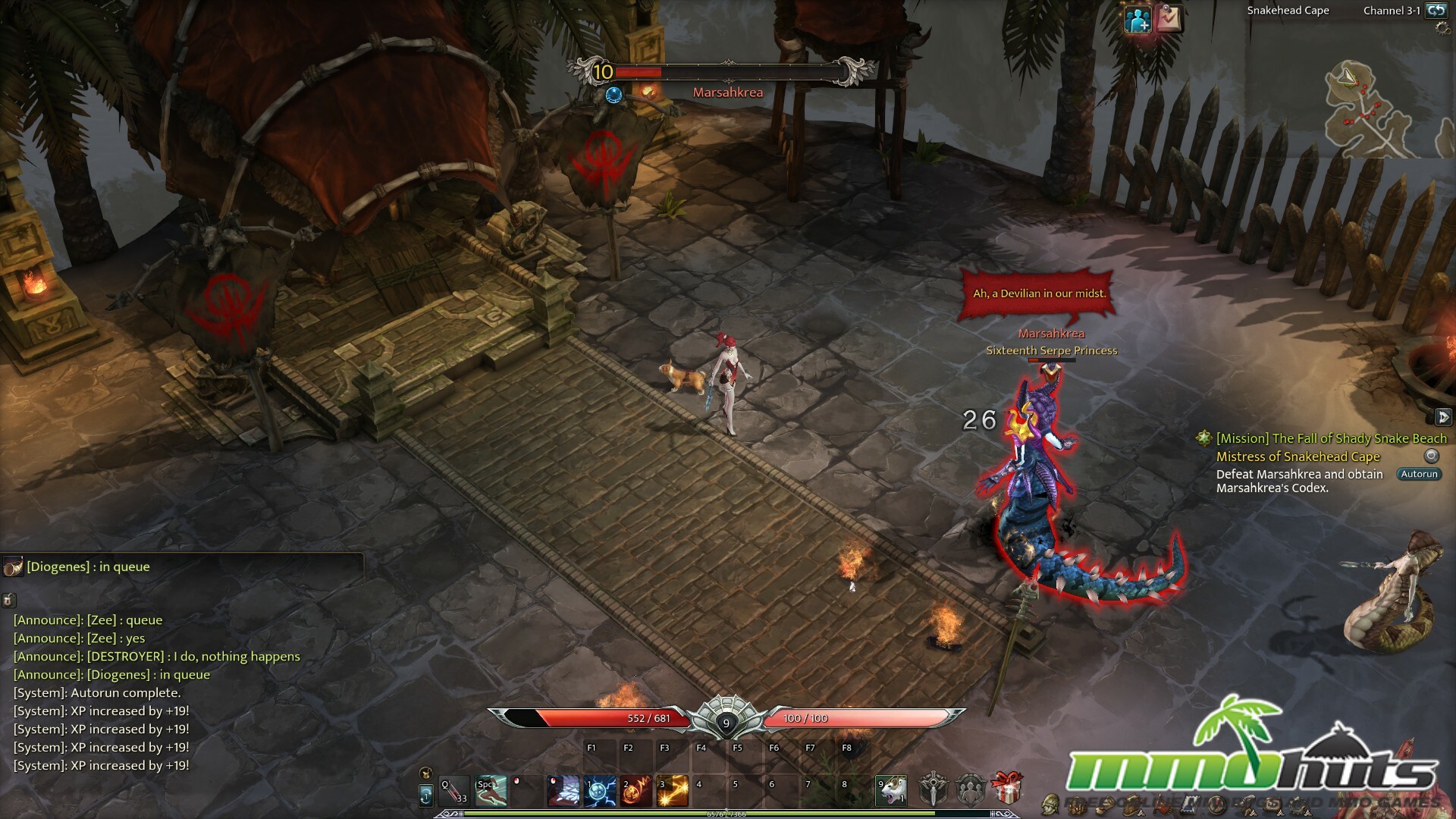 Having no dedicated healers means learning to dodge early and often.

In Devilian, you have four classes: The manly Berserker, the adorable loli-gun-wielding maniac Cannoneer, the mysterious female Evoker, and the chain-wielding Shadowhunter, definitely resembling some manner of dark-elf or demon (despite needing to turn into a demon). As far as base classes go I feel like Evoker and Cannoneer are going to be insane in PVP, thanks to their ability to control/snare opponents, which can only get better as you level up your skills. One of the cool things about this game is the lack of a dedicated “Healer” class. Every class felt like a powerhouse even in solo gameplay, meaning you won’t have to worry about picking up a supportive character that feels gimped without friends around. Instead of yelling for a medic, you need only dance between attacks while spamming potions as they come off cooldown. With dodge set to spacebar, and knowledge of enemy attack patterns, you can usually stay on your feet for quite some time even against tough opponents. Upon reaching a certain level you can go on a quest to activate your inner power and give yourself a second leveling grind. You use Souls to increase the level/power of your Devilian, and there’s even an area to help you grind it a little faster.

You have three members to a party and once you get far enough in the story you have access to the dungeon queue, which pits you through a pretty straight forward dungeon crawl complete with the holy trinity of ARPGs: piles of enemies, cool loot, and a rating at the end (which goes as high as SSS I believe, the Korean indicator that it’s time to quit your dayjob to focus on esports). There are also achievements to net you bonus rewards, but that’s pretty par for the course these days. The daily challenges have a similar system, nothing game breaking but definitely helpful.

Each class has several trees to choose from, offering new and powerful abilities outside of their base abilities. You start with all of your powers right out of the gate, but skill points give new ones/offer modifiers to them (think World of Warcraft). Not all of them are useful I’ve found as far as damage goes, so I’m pretty grateful that the game allows players to recycle skill points and try again. There are other ways to customize your character too. Pets help, and in addition to that there are items called “Talismans” that come from Elite Monsters, the Abyssal Tower, Depraved Temple, or by crafting them. You have two tabs, and there are sets of cards to get bonuses from. You can salvage them, combine cards of the same level to make new cards, or upgrade them. Consider it like having a CCG (Collectible Card Game) within your game. Me, being a sucker for card games latched onto this immediately. 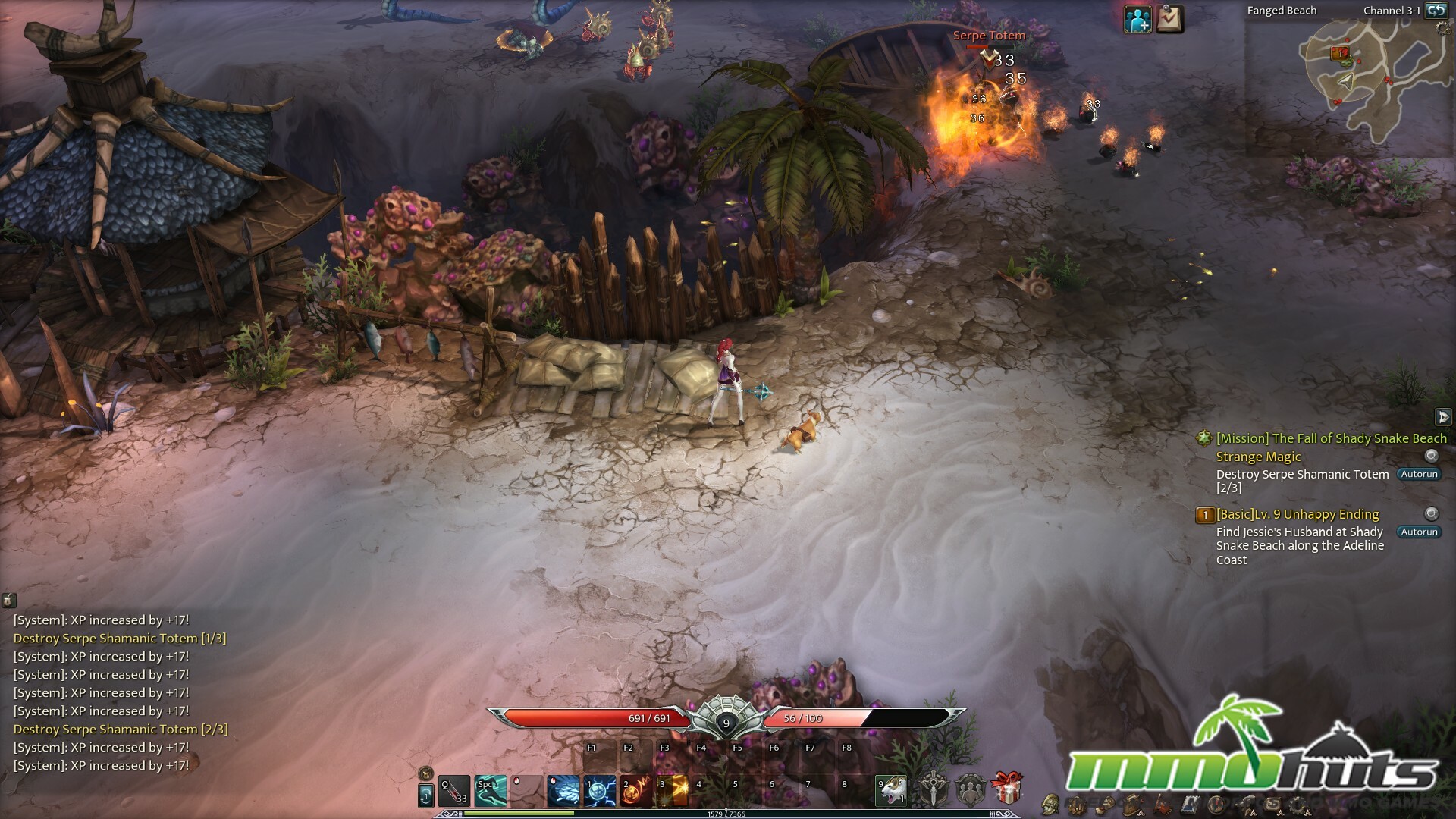 The Evoker's attack range often rivals her vision, leading to some unexpected consequences.

The camera angle being fixed bothers me a little in ARPGs, but it’s pretty much a staple feature in the genre at this point. Devilian’s gameplay makes the system a bit frustrating at times though when I drop a huge AOE spell and don’t see the wave of enemies aggroed by the edges of it just off screen. Luckily my Evoker does such an intense amount of damage that the mob train is typically devastated before they become relevant. The story hasn’t really gripped me yet either, but there’s still plenty of time for that. I know the world is in peril, and I’m one of the powerful Devilian, out to do great deeds. And if you don’t really care about that, there’s 20v20 PVP and 3v3 (parties are 3 members in this game traditionally), and it’s just as fast-paced as the rest of the game. Another cool feature (that I haven’t experienced yet sadly) is Guild Wars. You can level your guild by donating gold to it, and guilds can do battle with one another which is always a welcome feature in any MMO no matter genre.

There’s also a raid in the game at level 54, and I’ve really noticed this game pushes Friendship. There’s a system in place for Affinity with people on your friends list, and you can send them a box with some low level items to help them out, increasing your friendship with them. You also gain affinity simply by whispering and having conversations with them. It’s a reputation bar for your friends, and the higher your Affinity, the better the bonuses/items get, capped at 10 times a day. It’s a really cool concept to make friends/help each other out in game.

Featuring “Dante” from the “Devil May Cry” Series

Okay, not really. But everytime I read something about this all I can think of is Castlevania or Devil May Cry. Is there fanservice? Yeah, there’s jiggling, squealing and screaming, and the Evoker’s got plenty of skin showing, not to mention the art for the various Talisman cards. 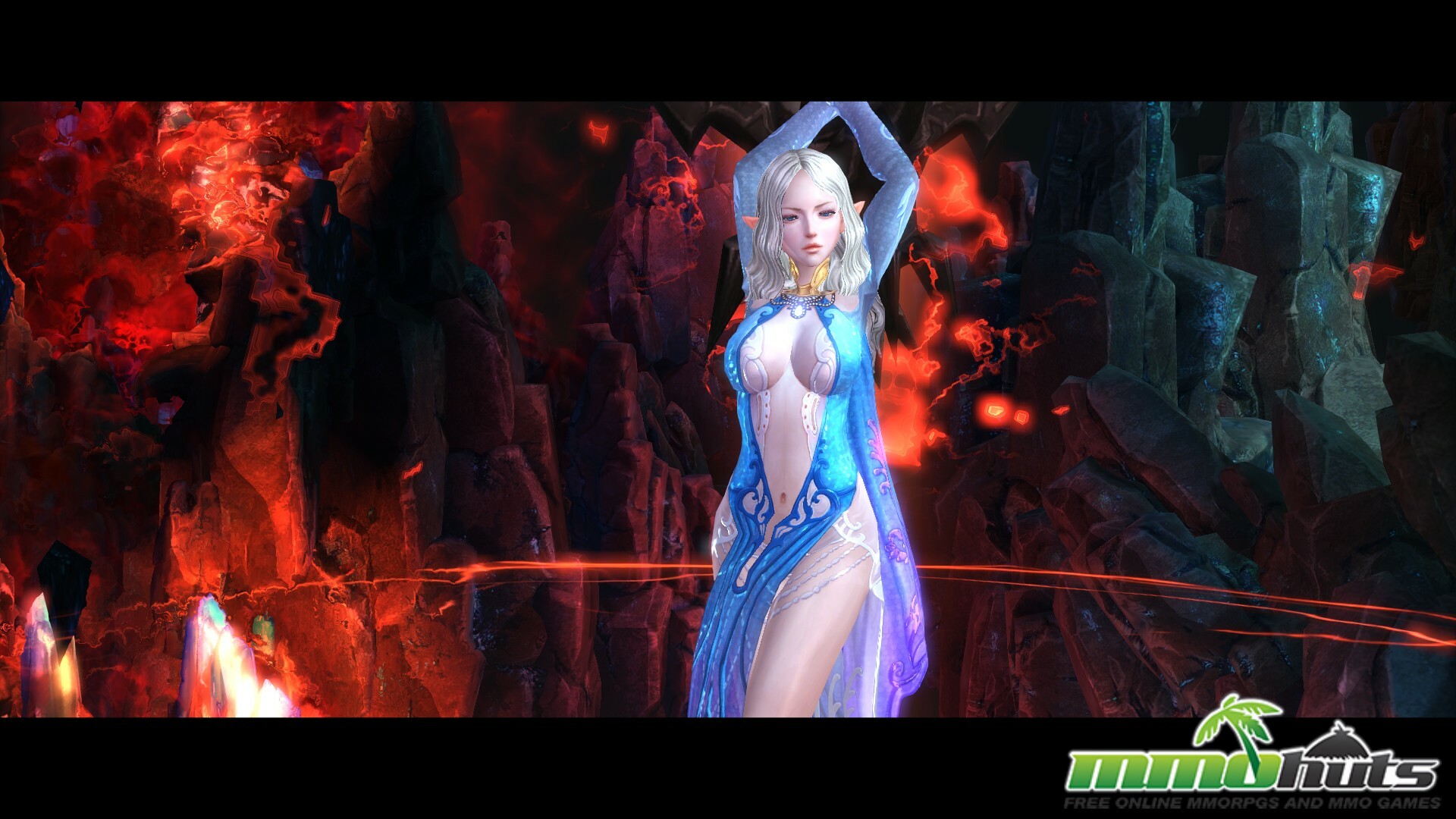 What was I going on about?

This does not make the game less fun; it’s still a blast. Nonetheless, it does exist. I need to point out one more thing that I think is both great and awful. Autorun. You can autorun to quest objectives, where you hop on your mount and ride through the enemies; mounts lower your agro with them, dropping you right where you need to be. It takes a lot of the work out of the game, but it does let you admire how pretty the game is, and get you exactly where you need to go for a quest without having to guess, look, or stress.

Players are half-devils, and are doing battle with a Fallen God, and though I’m not really absorbed in the story yet, I’m looking forward to seeing more. Trion Worlds’ games are always different from one another, and ARPG is going to turn heads if they keep up with this pace. 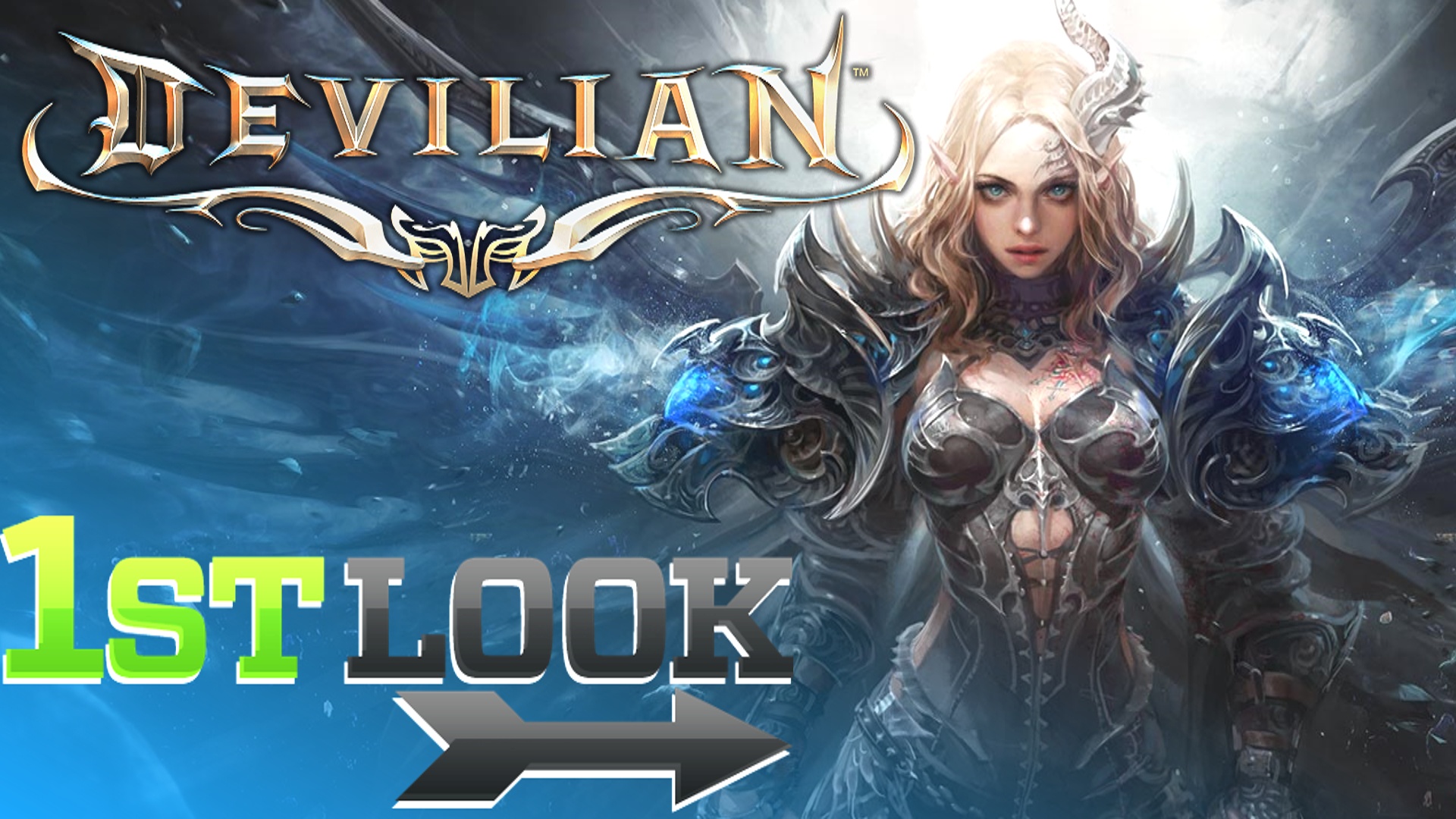