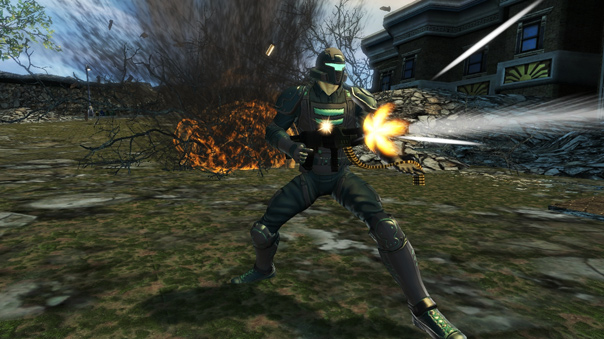 This April 1st I was invited to participate in a press preview for DC Universe Online’s latest power, Munitions. This new update allows Heroes and Villains access to military-grade weaponry to protect or terrorize. You’ll have access to things like pump action shotguns, mounted turrets, or even a mini-nuke. As you might imagine, the Munition power is focused on dealing damage and using crowd control – Guts or Glory. If you’re a fan of guns, explosives, or any form of devastation, but perhaps aren’t a big fan of Gadgets, this may be the power for you.

In the past, DC Universe Online took a more traditional approach when it came to DLC – giving Powers, new instances, new content, and more packed together. Recently, however, they’ve taken a different approach with their DLC, allowing players to purchase content in smaller, cheaper chunks. Munitions is the first Power ‘DLC’ that will be made available to players (“Soon” is all we got, sorry!). Personally, I’m not sure how I feel about this type of “mini” DLC in MMOs – I’m generally against anything that can’t be considered “expansion” level content. But then again, DC Universe Online IS a Free-to-Play game, so it’s not like you’re having to pay $60 and then have a DLC tacked on as well. 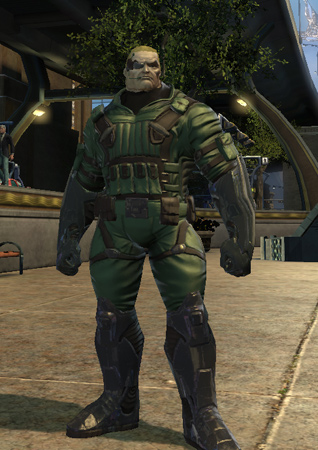 Stand your ground. Your enemies won't.

The Munitions power is for those who want to be like Sgt Rock, Lady Blackhawk, Arsenal, or Deadshot. Those who focus on weaponry, but not specifically gadgets (such as Batman). And although there are some similarities between the concepts behind Gadget and Munitions, they are still completely different styles of powers and offer a completely different gaming experience. If you’re the type that loves explosions and revels in carnage, you will want to pick up the Munitions power as it has both in spades.

When a character is created, there are a few key choices that are made by the player. These are things like the mode of movement, the character’s mentor, their “weapon” which can be things like rifles, fists, or power-blasts from your hands. And, of course, there is the choice of power. You might wonder why Munitions is needed if DC Universe Online already allows players to make use of assault rifles or pistols as weapons. Well, weapons are more for basic attacks – your basic “one, two” type moves. Munitions brings firearms (and various other modes of modern and slightly futuristic destruction) to the level of a ‘superpower,’ allowing those who are a fan of this type of hero or villain to live out their fantasy.

Although some of the power names are lighthearted, the military-grade weaponry of the Munitions power is nothing to scoff at. There’s Flak Cannons, Mounted Turrets, Miniguns, Chain guns, and more. One moment you might be firing away with your Pump-Action Shotgun, then switch to your Small Package (think of the ‘Noisy Cricket’ from Men in Black), and then you’ll unleash a Mini-Nuke right on top of what is left of the enemy for good measure. All along you’ll be knocking-down, knocking-back, stunning, snaring, burning, or even juggling your enemies with bullets.

Munitions is a power with two different skill trees available. There is Guts, which focuses on DPS and general mayhem. And there is Glory, which focuses on control-type moves, such as nets to trap opponents or buffs that benefit the whole group. You will find that the way abilities ‘act’ can change drastically just by switching between the DPS and Controller stances. Both are different means to the same end – the complete extermination of your target.

Guts is definitely more focused on “modern” firearms, shotguns, .50 cal, minigun… That sort of stuff. Of course, there’s some really over-the-top weapons such as the Rocket Launcher that lets you do rocket jumps and the mini-nuke (which is exactly what the name suggests, mini-nuke cloud and all!). Then there’s the Killer Instinct buff that gives you a Rambo headband tied around your head, along with some damage and critical hit chance increase. Essentially, Guts is for when you’re out to kill. 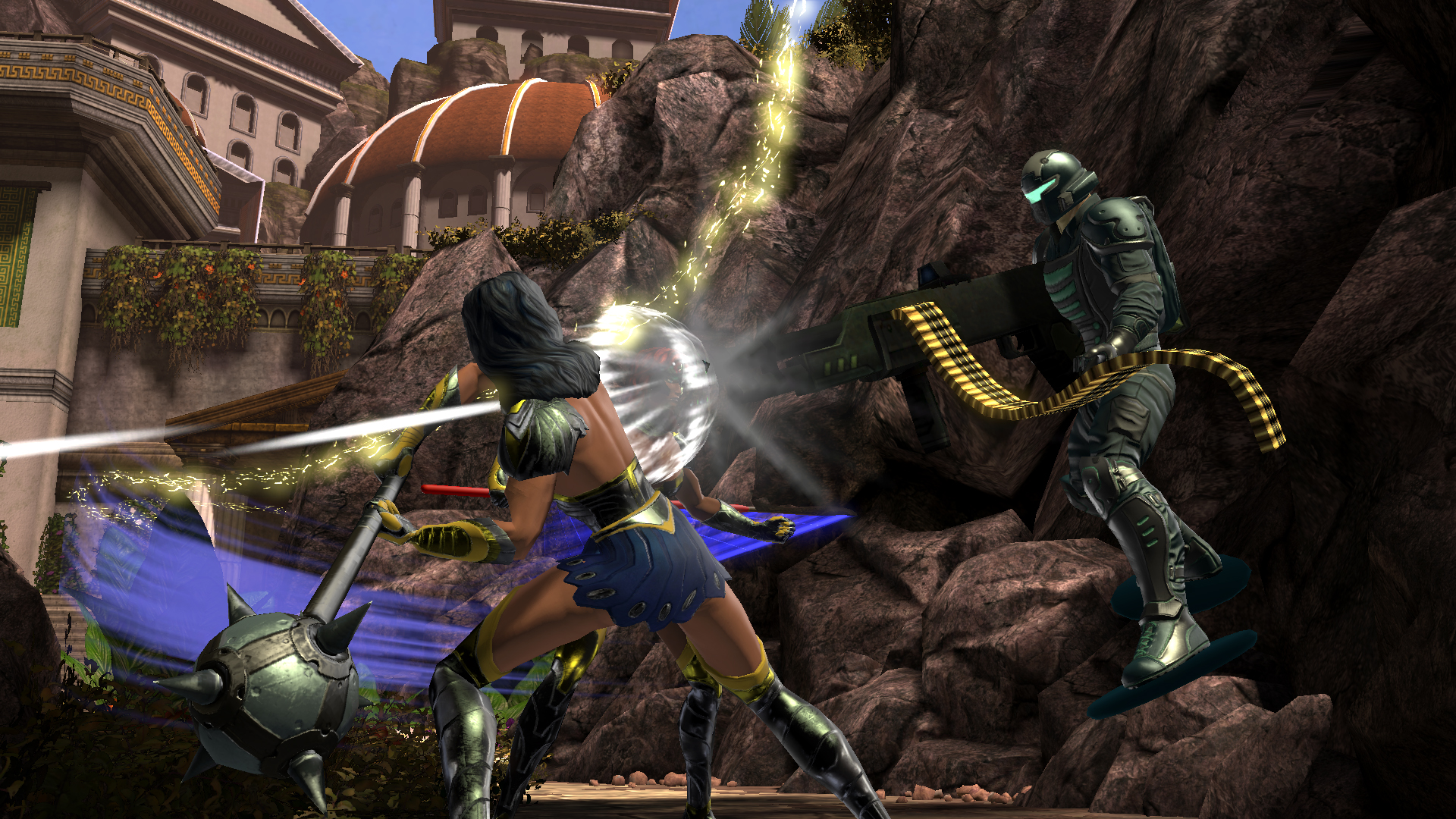 Guts OR Glory? I need both!

Glory, on the other hand, is more specialized towards turning the tide of battle. It has an assortment of future-tech weaponry such as the Particle Gun or Multi-Net Launcher, which might look a bit like Gadgets. This is also where you begin to get into some of the more whacky ability names, such as Biggun (Big Gun), which shoots a large energy bolt at the enemy. There’s also ‘Splosion, which does what the name suggests and causes an explosion that can knock an enemy down. There are also more Crowd Control (again, net cannon) and AOE-type abilities present, such as the Flak Cannon that hits multiple enemies or Reload which will revitalize the three most tired members of your team.

If I haven’t made it clear yet, Munitions is all about causing destruction. What might not be apparent is just how mobile this power is. You’re constantly on the move – not even pulling a rocket launcher out of thin-air and unloading with it will slow you down. Heck, you might find use for that rocket launcher and propel yourself towards your enemy as he tries to run away. The closer you are to your target, the more damage your Munitions abilities will do. Or, if you find the fight going sour and you need to step back to chow on an MRE, you can rocket jump yourself back.

During the preview, I couldn’t help but be awed by how fast-paced and intense everything about Munitions is. You can even get bonuses for changing between your various weapons, called Bullet Frenzy. As you use your weapons, you’ll activate Bullet Frenzy and give yourself access to a variety of benefits. So you’ve got this guy (or gal) totting around a wide assortment of weaponry to unleash complete and total annihilation on the battlefield, all the while constantly on the move and jumping about like it’s nothing. I can safely say that if you are the type who aspires to be like Rambo, you’re going to love Munitions a great deal. 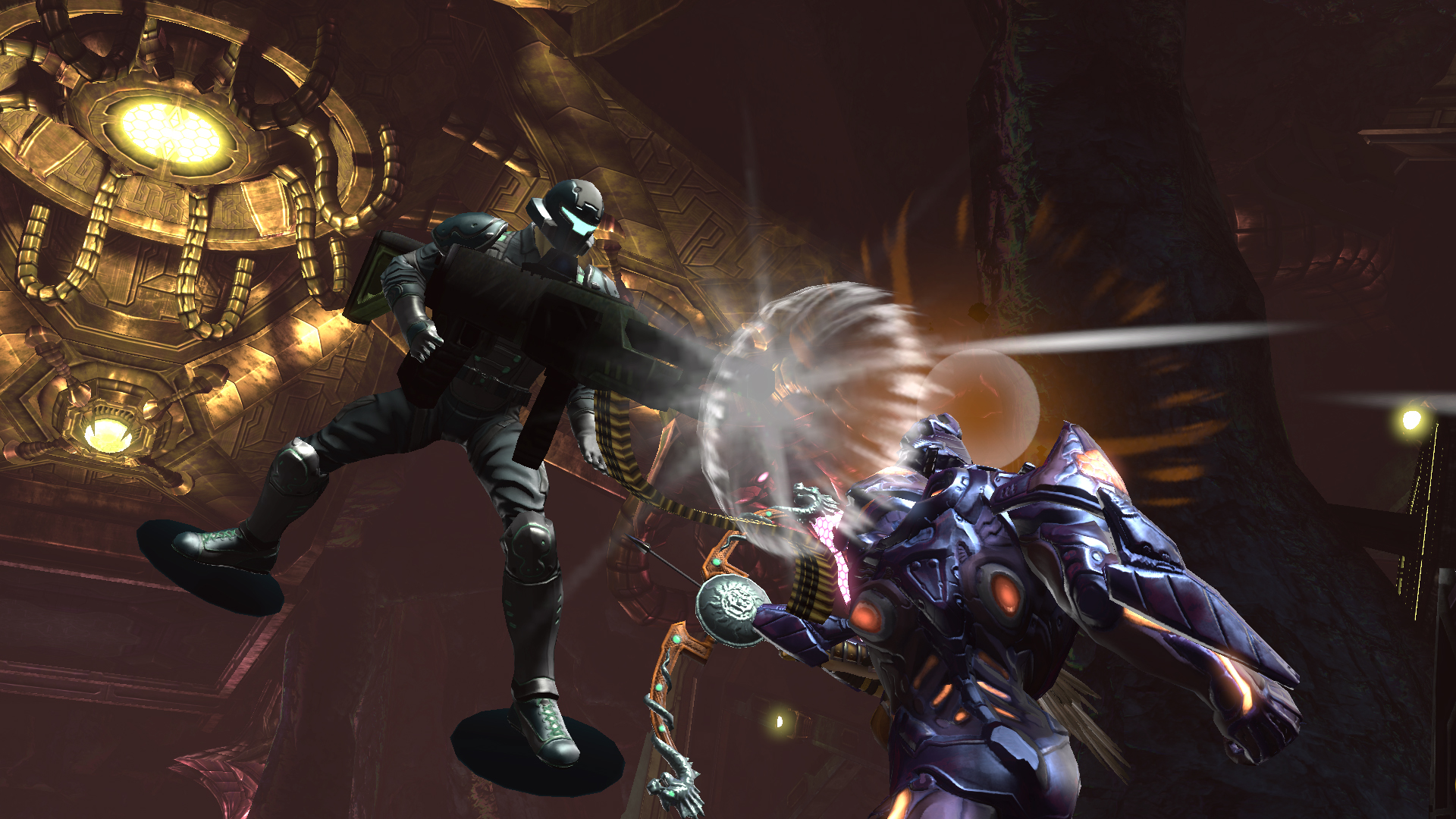 There are also plenty of Crowd Control abilities such as the Chain Grenade Launcher, which fires two grenades chained together at your target, tangling them up and then exploding. To start with, most of the abilities in Munitions will be able to move your opponents in some way. The Chain Gun can push back, stun, or even juggle enemies. Just about every ability in both Guts and Glory has a knock-down effect attached. Glory seems to have more stunning effects, though. Between all the CC, you’ll be able to move your enemies as much yourself. This really gives meaning to “Controller.”

Combos and buffs play a big role for those with the Munitions power. For example, if your target is burning and you hit him with a Rocket, the enemy will explode. If Bullet Frenzy is activated, most abilities have an additional effect such as the Five Barrel Minigun giving extra damage when Bullet Frenzy is on. If you have Killer Instincts on, you’ll gain Eye of the Tiger which can give Power Restoration. At first it may seem that Munitions is all about going mindless with a ton of firepower, but there is a method to the mayhem.

There’s no doubt that Munitions is a fantastic new power for DC Universe Online. I’m sure a lot of people have enjoyed the stories of munitions-based heroes and villains like those I listed at the beginning of the article. I love how mobile and active playing as Munitions will be – there will never be a dull moment in combat when someone with Munitions is around. Definitely one of the more interesting DPS and Control powers I’ve seen in the game so far. If you’re a fan of DC Universe Online, or perhaps are interested in coming back to the game, definitely check out and keep an eye on the up-coming Munitions DLC.