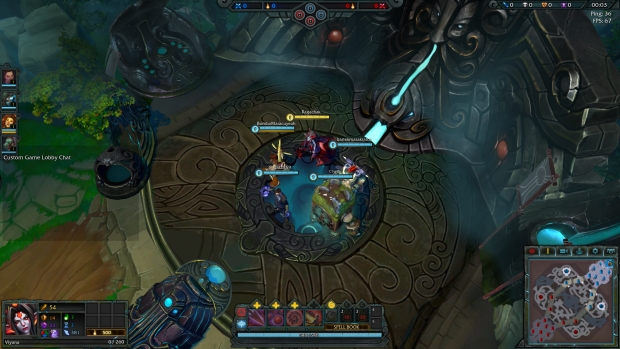 Waystone’s Dawngate is in the process of being rebuilt. But I have invested a chunk of my time into this game, and what I have come back with is a mixed bag of emotions. Multiplayer Online Battle Arena are the flavor of the month right now. Among them are SMITE, League of Legends, Dota 2, the upcoming Infinite Crisis (which I am also in the beta for), and a host of others. Waystone is trying terribly hard to take the tried and true MOBA formula and turn it into its own game. For better or for worse, I feel like they at least succeed at that much. One of the major problems with video game communities is the notion of the “killer.” Every MMO wants to be the “WoW-killer.” Every MOBA wants to dethrone League of Legends and Dota 2. It is this unfortunate mindset that I believe leads to the toxic communities these games have to offer (that and the anonymity of the internet). Perhaps it is this writer’s idealism, but if communities would work together, there would be a lot more enjoyment in games in general. The genre doesn’t have to reinvent itself with every game. FPS and RPG titles are proof of that. Just enjoy smile, say “GLHF,” and get in the game.

You Aren’t Dealing With Your Average MOBA Anymore

MOBA titles have the same goal: break past the enemy defenses, and destroy their base. How they are set up generally varies, but the goals are the same. One positive for Dawngate is that it’s very different in its map set up. The average MOBA layout is three lanes: two duo lanes, one solo lane in the center, and a jungle. You have three towers in each lane that lead into the main base. Here is where Dawngate draws the line. It is still the traditional five on five combat we have come to know and love, but there is no solo lane. The middle of the map is where the large enemy (Baron, Nashor) arrives at. Dawngate offers two lanes and a jungle, without a solo lane. This puts a great deal of emphasis on the jungler role; if you have no jungler, there is a lane of three people, or perhaps someone roaming from lane to lane instead, and either way the xp is split in an uneven manner. I’ve had several games where this turned out to be a liability. Another factor on the map is the Spiritwells. There are four of them, one in each corner, with two per team. You can acquire these after ten minutes, noted by an unlocking animation. Stealing these essentially gives you worker minions who are farming currency for you. It can become a major objective, especially if you are behind, to grab these and increase your income. 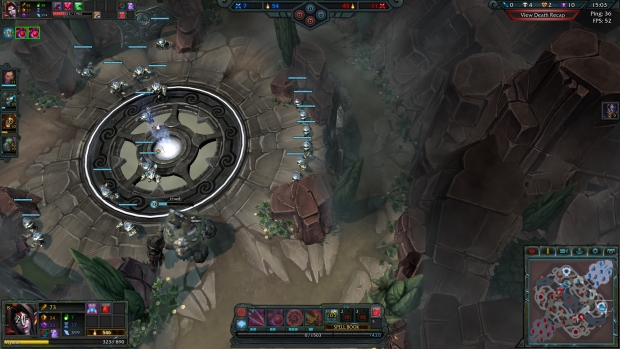 There is no leveling system to worry about, either. You do not start with a complete collection of items for your loadouts (think runes, etc.), and those are purchased with “Destiny,” a currency you get post-game. You do start with a few of these to place on your grid, and there are several slots to try different builds. One thing I liked about this system was not having to grind for twenty or so levels to add stats to my character. While Dota 2 already eliminates this issue, and I find their system more enjoyable, it’s also nice to not have to wait level after level just to add a few points to my champs when the system does exist. Loadouts are made in a square pattern with a certain amount of space in it, and a variety of shapes to fill it with. These shapes offer a bonus on their own, and have slots for gems, kind of like material in Final Fantasy VII. The gems offer their own intrinsic benefits. You do not start off with many of these, but I have had no problem getting Destiny to purchase other shapes/gems. In a way, I like this more than leveling to 30, because I can start the game in my first match with builds that I think might work. If I find they do not, I can just change them.

A Rose By Any Other Name Feeds Just As Hard

Another point to look at is nomenclature of playable characters. In League, they are called Champions; in Dota, Heroes; in SMITE, Gods. In this strange community, you best come correct with the right lingo. In Dawngate, we have Shapers. I was sort of surprised at how few Shapers I was offered at this stage in the closed beta, but after a few wins I could afford to purchase a few of them to try, other than the free to play offerings. This game is different from its predecessors in many ways, and this portion is certainly no exception to that. I have not played as everyone yet, but I have tried a healthy spoonful of the characters and I have found what I like and what I do not. Yes, most of the abilities are going to look familiar from some game or another, but that’s the price you pay for playing MOBAs. You will run out of cool powers eventually. One thing I thought was interesting was the lack of Mana. In Dawngate, Shapers either cast freely (with cooldowns), or have some other gimmick. I have yet to play with anyone that used “mana.” One Shaper used their health, a’la Vladimir. Another had Spirit, which refilled on its own. This is a pretty interesting point; not a game breaker by any measure, but certainly interesting. 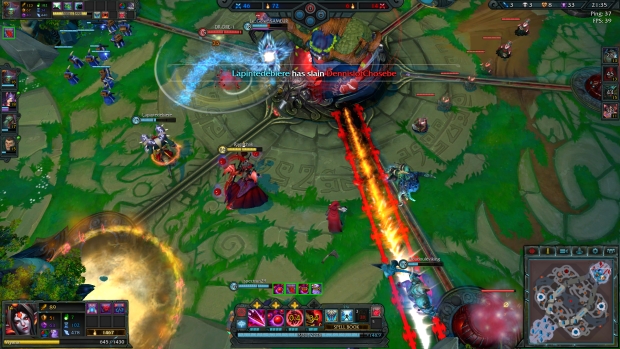 The Item system is also new and exciting. It is very streamlined, and in a lot of ways, it reminds me of earlier games. While the names of the items are generic and boring, the effects are pretty wild. You start with your green items (sort of like WoW, you have green/blue/purple), which are the basic items. The cost for the blue items are a little higher, and the purples higher still. The prices are not unreasonable though. If you click on the purple items, it shows you the path to take. It is better than having to buy seven items just for one, even if it is over simplified. There are still health pots and other utilities, but the game does lend a hand in what items your character probably should start with. And again, the spiritwells help you get currency to buy items, which is a definite plus.

The issue of surrendering is important to many MOBA players. There’s the “NEVER GIVE UP! NEVER SURRENDER!” camp. Then we have the “Jungler failed a gank, time to surrender” camp. Dawngate sort of sits in the middle, and there is so much jungle on this map, that I feel that this merits mentioning all on its own. The folks at Waystone offer a few instances where a surrender is free and clear to just get the game over with. In League of Legends, if a player disconnects, you still have to fight it out, until twenty minutes passes. Dota 2 gives a five minute leeway. When five minutes passes after a disconnect, the game informs you that you can surrender, and get out of the match. It also gives this option if there is a huge, overwhelming amount of kills on one side or another. I thought it was kind of nice, but it was a little upsetting to see that the game was just unwinnable. I have won a horde of matches when we were 20+ kills under in other MOBAs. I do not know if that is as viable in Dawngate, as I have seen a few matches where one player wanders and murders an entire team. Perhaps it is not balanced yet, but it is still in Closed Beta. 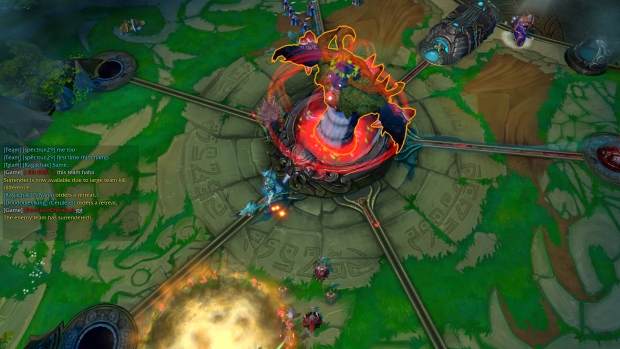 Post-game has its own interesting details. After the game is over, you are taken to a screen that asks you to click on players who made the game fun and enjoyable (Karma). You can click as many players as deserve this. Depending on how long the match was, if it is your first win of the day, victory, and Karma, you are given a score, and depending on how high you go, you get to open a chest, that gives a variety of items. Examples of these are currency and shapes for your loadout boards. There are some unrevealed aspects of this yet, so it is pretty difficult to reach the top of the charts just yet. But, we shall see! I do think this is a pretty cool concept, and even if you are the bottom, you still get the common chest. 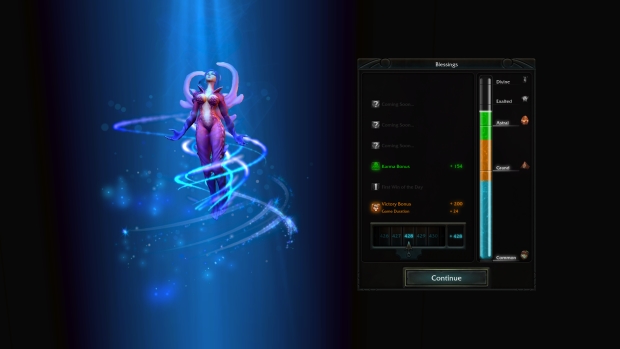 One final note on this beta: I have been in a dozen betas over the past couple of months. Literally! I have to say, beyond a shadow of a doubt, I have never seen a more self-entitled, toxic, abusive community. It is even worse than League of Legends’ community, so far that I’ve seen. There are nice people in this tiny community; however, there are a whole host of people ready to yell and scream and rage if a simple mistake is made. I suppose this is part and parcel for all online games, but I was genuinely surprised at the level of toxicity in a beta. The point of a beta is not to get good at the game before everyone else; it is to learn the game, find bugs/inconsistencies, point out other flaws and broken characters for hopeful balancing. That simply cannot be done if players are just in it for bragging rights.

Final Thoughts: Work-in-Progress.
I really want to like the ideas that Waystone is dropping here. It’s a different sort of MOBA, while also keeping traditional elements. There is still quite a bit of distance to go for the Waystone team, but I have confidence that they can do it. I do hope they release more Shapers into the beta, or perhaps make more of them available at one time, but that is something I simply do not have power over. (But if you’re reading, I’ve always got ideas! Just sayin’!) There are a lot of good and bad things, but overall, I think it is a beautiful game, and way better than its original iteration. I was genuinely surprised at how detailed the graphics were, how interesting the characters sounded, the kits were fun, and overall, I enjoy playing the game.