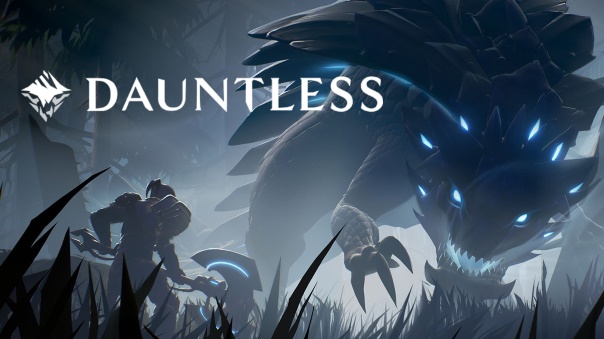 Dauntless is a free-to-play action monster hunting game from Phoenix Labs. You play as one of the Slayers, a group of trained hunters that go out in the already shattered world. As a slayer you are tasked in taking down aether-filled monsters called behemoths where you can use their parts as your crafting materials for weapons and monsters, ala Monster Hunter.

Dauntless’s core gameplay focuses primarily on gathering parts and broken pieces from behemoths that are littered throughout the shattered floating islands in the world. Using the five equippable and craftable weapons (Sword, Hammer, Chain Blades, Axe, and War Pike) you will be dropped on instanced islands that you can solo or co-op with a max of three other people to hunt down a single behemoth.

The Shattered Isles currently have five zones that present players can unlock as they follow through the game’s main quest line. Each unlocked zone provides players with a variety of behemoths that increase in difficulty.

Each zone has three game modes that players can attempt: Patrol, Expedition, and Pursuit. Patrol hunts will have players face any of the behemoths unlocked in that zone, but provide a lot more archonites (upgrade materials) than the other two game modes. Meanwhile, Expedition hunts will provide players the opportunity to gather reagents, materials that you can use to craft consumable items. Expeditions also give players the chance of facing a more limited set of behemoths, though they are still chosen randomly just like in Patrol hunts. Lastly, Pursuit hunts, as the name suggests, are hunts where players can choose the behemoth they can hunt on their own; however, Pursuit hunts have the lowest hunt-end rewards of the three modes.

The game mostly revolves around behemoth hunting, opening up new areas and gathering equipment from said behemoths. If you’re a fan of the Monster Hunter franchise, you’ll feel right at home with Dauntless as it’s practically Monster Hunter but with a slightly different tune and tempo.

Moving on to Dauntless’ weapon system, the initial five weapons have their own varying playstyle that was designed to provide players different styles of gameplay. However, some weapon’s utility in the team will overlap; for example, Hammers and War Pikes. War Pikes’ move list focuses on bringing in DPS or “wounding” behemoths to further weaken their parts, while Hammers on the other hand primarily focus on staggering and stunning behemoths. However, War Pikes can stagger behemoths with the use of their Pike Blast ability but require more setup than the Hammer’s Primed Strikes that can easily stagger behemoths with a few well-timed hits.

On paper, Dauntless’ limited weapons may seem a downer, especially if you’re used Monster Hunter’s numerous weapon types and builds. Dauntless is able to maintain your interest, however,  because you need to get used to the weapons you have available. Getting to learn the moves and making them effectively in-tune with the behemoths you face is one of the reasons why you will keep on coming back to play.

There is one thing that the game’s weapon list lacks though, and that is the lack of any projectile weapons. As a person who used mostly bows and LBGs in Monster Hunter games (in parties at least), the lack of this weapon type may turn off those who want to check the game out. However, during the time of this review, it seems like that Dauntless may be getting its first projectile weapon, the Harp Bows.

Next on the list is Dauntless’ bestiary. Currently the game has roughly 24 behemoths that you can hunt. Similar to Monster Hunter, where some of the dragons and wyverns have a variety of subspecies like the Rathian have the pink, azure, and gold variants, some of the behemoths in Dauntless also have these kinds of versions which Dauntless calls dire versions. So, among the 24 behemoths, there are overlapping behemoths that have entirely different movelists and materials that you can gather.

Behemoths also follow a weakness and strength system that is also translated into the weapons and armor that you can craft from them. Currently, the game has three elemental classes which are blaze, shock, and frost; each one is strong and weak against another element.

Behemoths also have two “forms” as you face them in-game. You have their normal versions, where their attacks and movelist follow their more basic actions. Then there’s the enraged form, where the game boosts their moves and attacks to hit harder, faster, or have a new set of skills that you need to adjust to.

One of the more interesting features of Dauntless is in the way Phoenix Labs designed the armor/weapon crafting system. Unlike in Monster Hunter, where you can craft the same armor/weapon as long as you have the Zenny and materials for it, in Dauntless, you can only have one copy of the armor/weapon and then focus on upgrading this equipment as you progress.

This is one of those things I had to get used to coming from a Monster Hunter title. On the plus side, this allows you to just be able to focus on just improving the armors you have instead of juggling them around like in MH. On the minus side, this limits the armor sets you can make in-game.

This kind of crafting system on paper seems to limit the experimentation on the armor sets you can make in-game, however, Phoenix Labs created an interesting system to at least allow players some semblance of armor customization.

Aside from the base stats and skill abilities your armors inherit from creation, equipment have slots that you can put “cells” into, which provide more skill points for your equipment.

Dauntless’ slotting system is a bit more intricate than your usual slotting system, because you can’t just simply slot in whatever cells you have into them. Cell slotting in Dauntless requires you to use a specific required cell on the specific slot. Cell slots are armor dependent but fall under five general classifications which are Power, Defense, Mobility, Technique, and Utility.

Conclusion: 4.5/5 (Great)
There are still game breaking bugs, but the speed of how they’re fixed encourages me to keep on supporting Phoenix Labs.

So far, Dauntless has been spot on in providing the monster hunting experience the PC platform lacks. As a fan of the MH franchise, I was not disappointed with the experience Phoenix Labs developed in Dauntless.

I must admit, too, that Phoenix Labs was able to handle the transition to OBT quite well. While the initial OBT jitters came into play on its first few days expectedly, what I didn’t expect was Phoenix Labs’ speed on handling these OBT opening problems. The initial long queues (there was one instance that there were around 40k people in front of me in the first days of the OBT) were gone within the first three days of OBT launch, and some of the game breaking issues were fixed within a span of a few days, or a week at most. This kind of bug fixing during the initial weeks of the OBT period is unheard off, or at least, something that I don’t see quite often (or at all).

I also liked how the tier 5 behemoths would cycle around on a weekly basis, instead of putting them permanently on the area hunt targets. This allows players to keep on coming back to the game, aside from the MMO-style dailies and weeklies the game throws at you.

Overall, Phoenix Labs and Dauntless are one of those commendable OBT releases this year.  I’m happy to say that the way they handle the games issues encourages me to support the game more. This doesn’t mean that Dauntless is perfect; in fact, there are still a lot of issues that bugs me whenever I log into the game. However, these “issues” are something that I can provide them a wee bit of leeway considering how well they are managing the current situation.

If you’re like me, a person who’s aching to find an honest to goodness monster hunting game on the PC platform, Dauntless is definitely one of the titles you should sink your time and money if you have some lying around. I am looking forward to the game’s future.