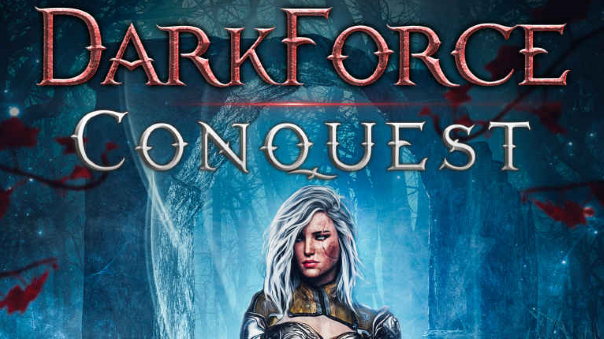 DarkForce: Conquest was authored and self-published by R. M. Mulder. The audiobook, which is the version I experienced, was narrated by Andrea Emmes. The print version is listed at 420 pages, and the audiobook at default playback speed is 7 hours and 56 minutes.

I specify default playback speed because when I first began listening to the audiobook, I felt that the narration wasn’t the greatest quality. It had a mechanical sound to it that frankly was off putting. Interestingly enough, when I increased the playback speed to 1.25x, it actually greatly improved the tone of narration, and it sounded more natural. This leads me to question if perhaps the narration wasn’t slowed down in order to reach the nearly 8 hour default playback speed, in order to increase the perceived value of the audiobook. I have no proof that this is the case, merely a wonder.

I’m told that this was actually the first book of the series to be written, but it is listed as the third book of the DarkForce saga. The second book, Ambush was written after Conquest, and Skirmish, a novella, was written after the second book, but is the first in the series. If this is all very confusing, don’t worry, that disjointedness carries itself into the plot fairly well. It was suggested to me that the books could be read out of order, as each was designed to be a stand alone novel, but not having read Ambush or Skirmish, I can’t really say.

The genre of the book is listed as GameLit, but I honestly felt that the addition of any game world portions was something of an afterthought, and where they do appear they feel inconsistent. The main character references the DarkForce game a few times, and there’s a brief interlude of him playing the game. A support character whose presence in the book feels very unconnected throughout actually spends more time in the supposed gameworld.

Later it’s revealed that the game world is actually another world, called Zion, but when characters visit this Zion without the typical game interface, the world itself feels very different. For example, one of the gamers is described as using a plasma rifle, while the technology of the time is predominantly archaic feeling, sside from a supercomputer that manages the teleporting between worlds.

The characters themselves are all very one dimensional, and what growth happens always seems to do so very abruptly. The relationships between the characters often seem forced as well. There often doesn’t seem to be enough backstory, and where there is backstory it’s outlandish. The usage of the NSA for example seems horridly unrealistic in ways that it rather hurt my head to try to explore. I also noticed a bit of usage of overdone gaming tropes, such as females in chainmail bikinis.

The story progresses apace, despite itself. There is a distinctive beginning, middle, and end, but I somewhat felt as though the end was rushed. I also feel like the book could have been split in two, stretched out with more narrative and less dialogue, as well as some expository as to what was going on. I would have preferred more consistency with the world building of the DarkForce game itself, as well as how that world was affected by or affected Zion. That was never made clear, and yet it felt like it was forced down my throat that the two were one and the same. It just wasn’t believable.

I will say the most redeeming factor of the book was the beginning of each chapter, which read like a bible verse, specifically from the book of Methuselah. Several of the passages from the fictional book of Methuselah were from passages in Genesis, Exodus, and Revelations, which made them have more ‘weight’. This was, frankly, just good fun, even though I myself don’t have religious tendencies.

R.M. Mulder is, like so many self-published authors, on the right track. I feel like Conquest could have been a great book (or pair of books), if it had an editor go over it, or perhaps sufficient beta readers – but mostly a solid editor. I leave it as an abject lesson to all aspiring LitRPG writers that there are things an editor will help you with beyond just checking your spelling and grammar, and you would behoove yourself to find some terms with one that you can work with.

As it stands, I feel like too much of the book was like watching a movie in fast forward, and trying to piece out what’s going on by the images on the screen. Perhaps reading Ambush would have left things more clear, but I think the pacing of the book just really needs work.