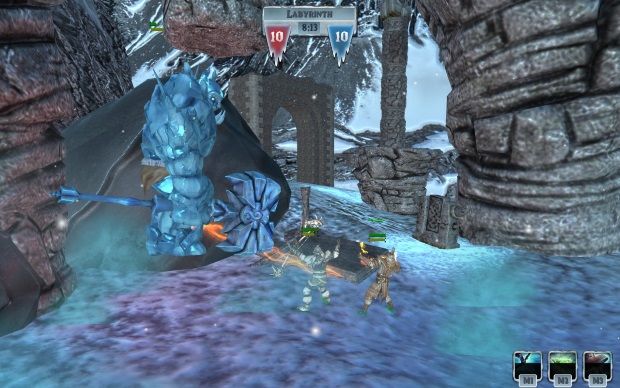 Dark Vale Games, makers of the top selling multi-player online game FORGE, has released FORGE: YMIL’S REVENGE, a multi-player action platformer where 4 Forge classes battle against a single, player controlled Frostunn Ice Giant. The game delivers a unique asymmetrical PvP game design while staying true to its fantasy roots. Players can elect one of 4 devastating classes or choose to go it alone as the Frostunn boss monster. The game offers a persistent skill modification and character customization system, high-speed combat and an arsenal of devastating spells and attacks.

“In developing the sequel to our first title, FORGE, we wanted to deliver a game that has the depth and complexity of a mid/hard core game but offers easy accessibility for casual gamers as well” said David Domm, Co-Founder/CEO of Dark Vale Games. “And centering the game around asymmetric 5v1 player versus player battles – well, that’s just friggin’ cool!”

Added Ian Natzmer, Co-Founder/VP of Development “In designing Ymil’s Revenge, we focused on a game that gets players used to skill based abilities and PvP mechanics without overwhelming them. A title with tons of depth for those who want it, but without the steep learning curve required to get there.”

FORGE: YMIL’S REVENGE is now available in a two-for-one deal for $9.99 (USD) via Valve’s Steam service, http://store.steampowered.com/app/327100 Every purchase of the game comes with a second copy of YMIL’S REVENGE free-of-charge which can be given to friends and clan-mates this holiday season.