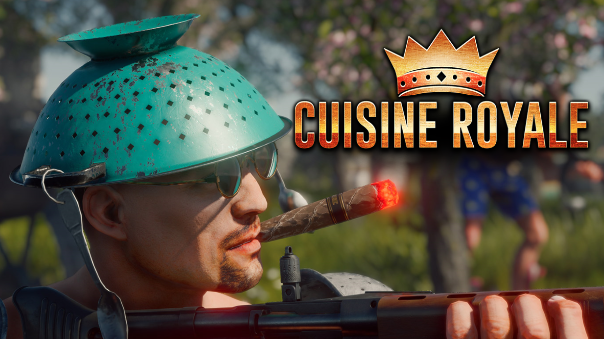 What started out as a simple April Fool’s joke has exploded into something else. From the makers of Enlisted, a game yet to be released but I can tell we definitely need to keep an eye on, comes Cuisine Royale, which despite its very simple style and mechanics, is proven to be a success. As of now the game is still entirely free to play, but in the near future they will change this into a buy to play game; however everyone who played during the early access will get this game for free. Since the Battle Royale craze isn’t far from over (some might say it’s still in its infant years), I obviously had to check this gem out, because it actually does things quite well where other Battle Royale games lack.

Cuisine Royale is a game that you shouldn’t take too seriously. You shouldn’t necessarily compare it to titans like PlayerUnknown’s Battlegrounds, both because the game is played on a smaller scale and the controls are a lot simpler. Cuisine Royale also doesn’t necessarily go for the realism that PUBG tries so hard to base around their game. Cuisine Royale also jokingly made pots and pans your body armor: instead of wearing a kevlar vest and a kevlar helmet, you have pots and pans strung all around your body, protecting the important bits of your human flesh.

While the world is not as big as one could expect from other Battle Royales, it’s definitely not a very small world either. At the start of the game, instead of jumping out of a plane or bus, you simply spawn randomly somewhere on the map. Most of the time this is still near a building, so you don’t have to worry that you’ll spawn somewhere in the middle of nowhere where some lucky sod spawns in the biggest city all by himself. The spawns so far have been really fair, and since towns and buildings aren’t too far away from each other either, the game has a somewhat fast pace. Looting in Cuisine Royale isn’t necessarily any different either, scattered around houses or even in the trenches, you will be able to find random loot. Let’s just say ammunition and weapons aren’t as common as in some games, and most battles are quite hilarious at the start, resulting in people taking their knives out and having a brawl while the pots and pans clatter around with their noise.

Most Battle Royale games we have seen lately aren’t really trying to make their game look all that great, but instead work on polishing the gameplay. Cuisine Royale is a bit of the opposite. I’m not saying the game isn’t well polished, because it does the job quite well, but the game’s graphics are on a whole new level, and I’d say it looks even better than what PUBG has been trying to achieve so far. The landscapes of Cuisine Royale are absolutely stunning; you can be standing on a small hill, overlooking this beautiful grass field, with a creek in between it, and a forest on the side, and you will be wanting to make a screenshot to use as your background on your computer. Now you might think, well your frames must be flying out of the window then?! Well that’s the thing, the frame rate is actually really good, take a note PUBG: apparently you can have a stunning looking game, with a lot of people, on an actual playable frame rate!

But despite all the positive features, and the absolutely picture perfect looking game, the game still has its cons. Looting is a bit of a hit or miss I feel like. While the game definitely doesn’t take itself all too serious, and the loot is also very diverse and funny, the looting can sometimes be a little annoying. Especially while you have just killed a guy, you quickly want to grab his ammunition or weaponry so you can keep moving on without getting shot in the back yourself, but this has proven to be quite tricky. I personally think that both might be easy to miss, especially since the food in this game works like first aid, but the plates of food take up a large spot on the ground, and while every single item is named and has a different rarity color around it, I felt like I was still fumbling around, digging with my bare hands through the items, looking for the ones I could use. While you can just spam the interact key to pick everything up, after a few bodies I looked like I just came back from a Walmart Black Friday sale, cause I had shopping bags on every single limb. Obviously this looks quite hilarious in third person, but even in first person the shopping bags sometimes fly around your screen.

This is kind of what worries me with Cuisine Royale. It’s obviously not as serious as some games, and it definitely doesn’t try to be. But even though the game started as merely an April Fool’s joke for an Alpha testing community almost no one has heard from, the game proves to be an interesting concept nonetheless and definitely took its spot among the many Battle Royale games. Right now I can see the game is a little stuck between the others. On one side the game isn’t all that serious, but on the other the game offers so many good things, along with its stunning looks, that it does need to find its place. I feel the game play is still a little lacking, the hit registration isn’t really the best, the netcode could still use some polishing, and I think the looting needs a bit of a change to become easier to pick up.

While the game feels and looks fantastic, it is obvious that the game is still very early in its progress. I worry that the game might not be focused on all that much, since the developers made it as a simple joke for a different game that is still heavily being tested by a tight alpha community. While Cuisine Royale definitely has conquered a spot among the giants, I fear that it might not hold its ground for all that long. While the game is an absolute blast to play, and I can oversee its shortcomings and annoyances, it does make me worry what the future of this game might be. As for now, Cuisine Royale is still free to play, but it might not be for long anymore. Whether or not I would pay for this game, I’d probably say no. In Battle Royale games, over the years we have seen how important it is to keep the game updated, and how important player numbers are. Cuisine Royale is obviously behind the curve, and since it was a mere joke, it is also very questionable what will happen in the future for now.

The game is definitely fun and is stunning, I felt in some things the game was still a little lacking and need to be worked on, but who knows if that’ll happen.