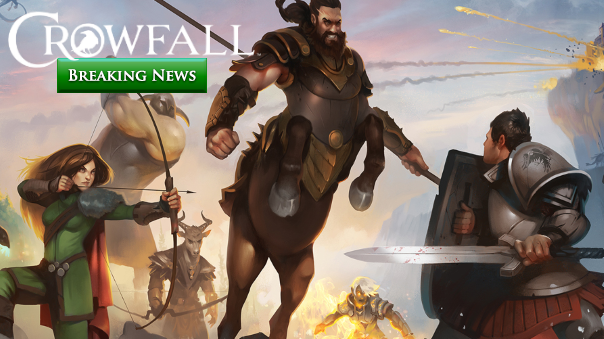 ArtCraft Entertainment’s Crowfall has grown constantly since its announcement in January 2015. While at first the game seemed like another hopeful dream that would disappear in the dark cloud of crowdfunding and gamer criticism, ArtCraft kept its plan on course. As a result, today Crowfall is in a great, active development state that constantly communicates with its fans. As the team heads to gamescom, we got a chance to talk with J. Todd Coleman, ArtCraft’s CEO, to talk about the current state of the game.

Jaime: There’s been a large focus publicly on siege technology and destructible environments. How has player versus player combat evolved in the last few months behind the scenes?

J. Todd: We’ve done a tremendous amount of work on PvP combat — we decided from the beginning of the project that combat would be a central pillar of the game, so a LOT of our effort as a design team has been centered around making it feel right. We’ve spend months now optimizing network performance, controls, animations, mobility, and adding to our toolset of features that our designers and artists can use to create new powers.

We still have some work to do (combat can always get better) but flagging it as our most critical area of R&D from the beginning was absolutely the right approach. That early investment is starting to pay off in spades.

Jaime: The game elements seem like they go between short-term MOBA-style gameplay and long-term guild-oriented build and siege. Are you envisioning different kinds of game modes or campaigns to support both styles, or will there be one game mode for all players?

J. Todd: We will have different rules sets, but they aren’t “matches” like a MOBA. Each of our servers represents a unique “Campaign”, meaning that it’s a fully encapsulated strategy game (like a massively multiplayer game of Civ or Risk, only every unit is a player.) These campaigns will play out over a period of months, in which players can collect resources, build fortifications, lay siege to their neighbors and (eventually) conquer the world.

Because each campaign has a clear end, it means we don’t have to follow the traditional MMO trope of resetting the world back to a ‘normal’ state. Like a strategy game, we can allow the world to change and the player(s) to have a real impact. Campaigns will have winners, and losers.

Characters (avatars), however, ARE persistent between campaigns. This gives us the best of both worlds: persistent advancement like an MMO, with a dynamic world — meaning that players can affect real change — like a strategy game.

Jaime: With a goal of 30+FPS for battles, with detailed models and effects, how large scale do you plan or expect battles to be? How will you accommodate if player numbers pull down game performance?

J. Todd: We have an LOD system in the works that reduces the graphical fidelity of distant characters (and animations, and FX) so that the battle doesn’t slow down. We expect to have 200+ player engagements within a local area, and are planning on servers that accommodate roughly 2000 players.

I should note, though, that this last figure (2000 players/server) is actually a design constraint, not a technical one. If our architecture works as intended, then servers could theoretically support many more. From my Shadowbane experience, I found that 1000 to 2000 concurrent players “felt right” from a design standpoint, so we’ve been using that target as our benchmark.

Jaime: Archetype previews on the website now show stats marked on a scale. Are these base stats or benchmarks, and how do they relate to gameplay?

J. Todd: Yes, you’ll notice that we don’t provide specific numbers for the stats — that’s because we’re trying to be honest with ourselves (and our community) about the way game development works. Game balance typically comes at the end of the project; in fact, with MMOs, balance is an ongoing effort that continues well after the game is launched (and hopefully successful!).

The ‘points’ system that you see for our archetypes is purposefully general. We want to give a feeling of the relative strengths and weaknesses of each archetype, but allow ourselves the latitude to make the changes as necessary.

Jaime: Why did you choose the species of your latest archetype, the Duelist, to be a guinea pig? Will they or other archetypes have size advantages and disadvantages on the battlefield?

J. Todd: There is a long history of having a “short race” as part of your MMO lineup: EQ gnomes, FF’s Taru Taru, Wild Star had the Chua. I think it’s a common element of fantasy literature, actually, from the Dragonlance Kinder to the original hobbits in Lord of the Rings. 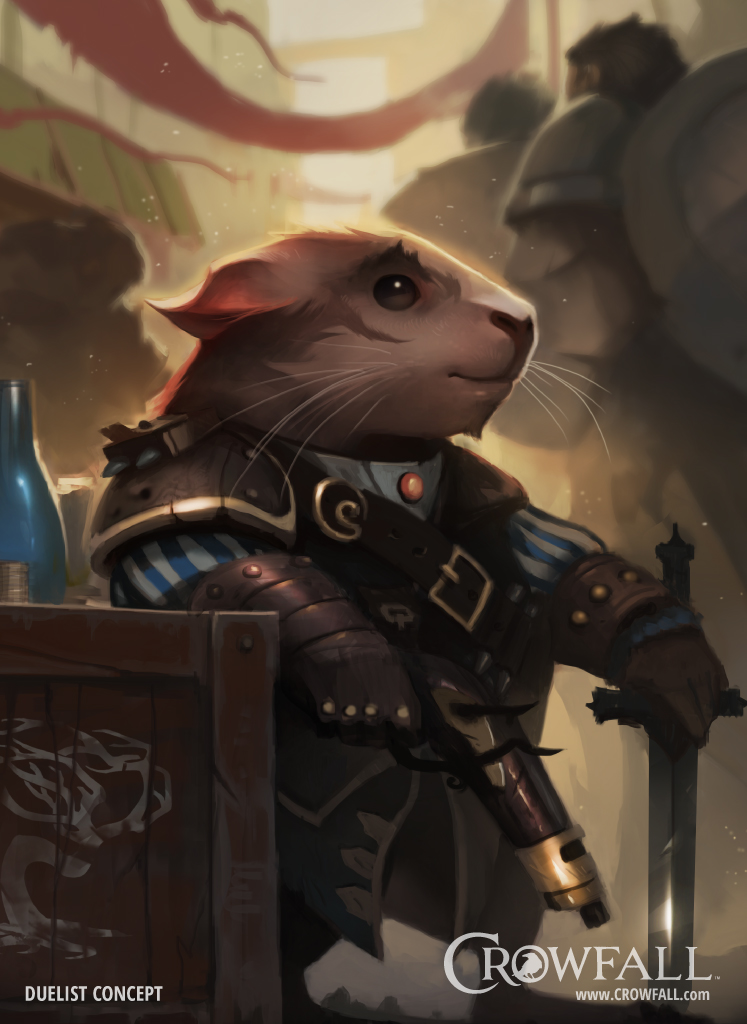 One of our concept artists, Alison, added a guinea pig to an early line up of our god pantheon as a joke. He was holding a battle axe and wearing plate mail. When I saw it, I immediately started laughing. Then I thought about it, and realized that there is a particular audience of players who really like to play small/little characters, and since I’m a huge fan of Narnia (and Reepicheep specifically) I decided it would be a good element to add to the mix.

The Guinecean race serves an important role in our game, IMO. All of our other archetypes are so serious, the universe is so dark, I think it helps to have one character that lightens the mood. I also like the contrast of providing characters that WE (the audience) find funny — but they (the characters) aren’t in on the joke. As a culture, the Guineceans take themselves very seriously. This contrast allows us to soften the tone just a little, without impacting the narrative as a whole, which is intended to be very dark and grim.

Jaime: You’ve talked recently about having a “giant world” in which players can run seamlessly from zone to zone, granting the ability to support an open world to whatever size you demand. Do you plan on servers having different sizes for different campaigns? How else can this technology be used?

J. Todd: Yes, each Campaign world will be made up of “N” servers, and the land between these servers will be stitched together seamlessly (so that players can walk from one to the next). As I mentioned earlier, we will likely limit the number of concurrent players to around 2,000 per server — though, assuming the architecture works, this isn’t a technical limitation.

Eventually, as a company, I’m sure we’ll see a lot of benefit out of our technology. We don’t intend to be a ‘one game’ company, and I’ve been able to re-use MMO technology to gain significant time and cost reductions. Right now, though, we’re only concentrating on Crowfall. Talk to me again when we start game 2 (…or game 3… or game 12).

Jaime: How much specialization can players achieve through disciplines? During the live event you mentioned that archetype characters can feel vastly different, but how far does this go before the core archetype becomes indistinguishable in gameplay? Will this leave enemy players prone to surprises due to an invisible specialization element?

J. Todd: My goal is to allow for a high degree of specialization (through Disciplines) on top of a foundation is that specific to each class. I think Shadowbane did a great job of this; you could make characters that felt (and played) very distinct, but when you went up against a particular class, you would still know with some degree of certainly what you would be up against.

Yes, this does mean that enemies will often have ‘surprises’ up their sleeve. Learning the Discipline tree, and looking for clues as to how your enemy might have arranged his or her build, will be part of that ephemeral equation known as ‘player skill’. The good players will master it, and use that insight to their advantage.

Jaime: You also mentioned during the live event that you’ve decided not to do balancing changes during a campaign, although this will lead to “flavor of the campaign” type builds. Do you feel that this may affect player enjoyment during campaigns where certain builds emerge as “overpowered”? Does this mean all servers will run concurrent campaigns so that balance changes can be applied simultaneously?

Yes, sometimes there will be certain elements or features of the game that will be much more effective. Some builds will be great. Some builds will suck. Some players will be able to use bad builds to dominate, in spite of balance. 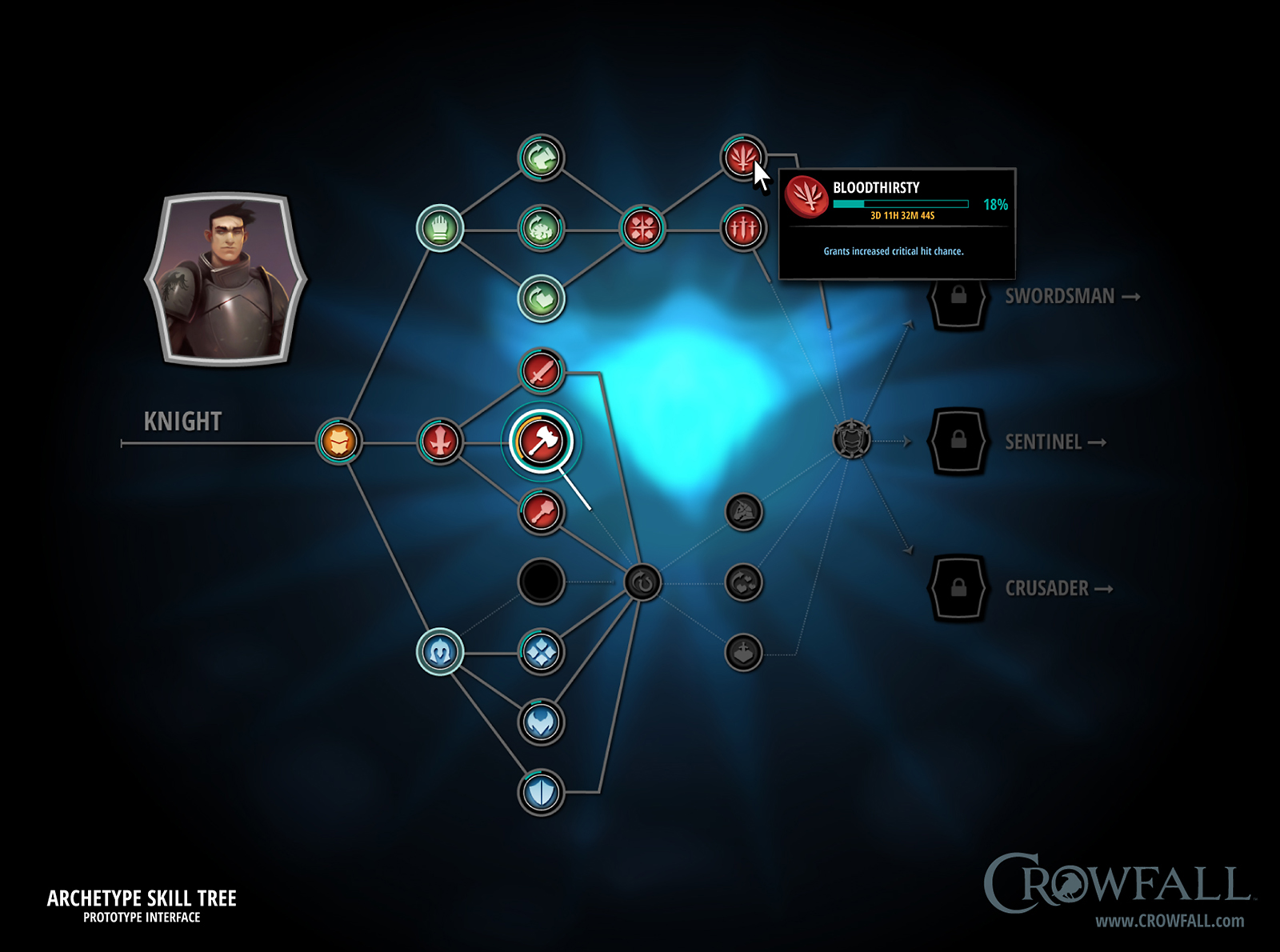 Because each Campaign is encapsulated, walled off from the game as a whole, it gives us the ability to let these things play out. If a player happens to find a combination that is really, really effective, it sucks for that player to log in the next day and find out that it’s been nerfed. True, sometimes these are legitimate cases of imbalance that we need to address in the system (as I said above, it’s probably <5% of the claims) but I don’t see any harm in allowing the Campaign to run the course. Exploring the game system, finding imperfections and creating unique combinations — that’s part of the fun.

…and, honestly, these moments are the ones that we remember years (or decades) later. No one remembers killing their 3,872nd orc in EQ. Everyone remembers the time that Rainz killed Lord British in Ultima Online.

Jaime: How will players gain a sense of permanent progress in their time in Crowfall, and not lose interest after a campaign ends?

J. Todd: In addition to Campaign Worlds, we also have ‘Eternal Kingdoms’. These are public and private (permanent) Kingdoms where players can build crafting stations, houses, castles, markets and mercantile empires. They are fully functional game worlds; they just don’t provide resources in the quality/quantity of the Campaign Worlds.

The flow of players, resources, goods & services between these permanent Kingdoms and the Campaigns is really the heart of the game. It allows us to provide a player-driven economy and a universe that is truly dynamic.

Jaime: What can gamescom attendees expect to see from Crowfall this year?

J. Todd: In future years, I am sure we will do the traditional ‘press tour’ thing. We are still in pre-alpha right now, so that seemed a little premature.

So instead, Gordon and I are going to meet with a bunch of our backers and thank them personally — and use this opportunity to introduce them to our new EU partner, Travian Games. I think it should be fun and, because it’s so casual, it also means that the pressure is off!

This is a chance for me to chat with people who get our vision and support our team and have helped us make this crazy idea into a reality… to be honest, conferences are usually quite stressful, but this one doesn’t feel that way. I’m looking forward to gamescom more than I have any conference in years!